The artist's MAEP exhibition, on view through October 30, offers up strange scenarios to ask questions about art, artifice, and our role as an audience

About 2,500 years ago, circa 440 BCE, an athletic young man stood naked in front of a sculptor named Polykleitos and shifted his weight onto his right leg. It was a simple, natural gesture, and it forever changed art history – standing, quite literally, as one of the oldest known examples of contrapposto. It’s a pose that allows for more dynamic expression on the part of the sculptor and one that requires much more technical skill to achieve. That young model grew old in his time, one hopes, and eventually passed away; the bronze sculpture of him, dubbed Doryphoros, "the spear-bearer," was eventually lost to time as well.

But this testament to ancient Greek ideals of masculine perfection and Classical realism survived in the form of marble copies the Romans made a few centuries later. One of these copies even stands on a pedestal right here, in our own Minneapolis Institute of Art. The names of these plagiarist sculptors are not remembered, sadly, but their craftsmanship was impeccable, even viewed through the stains, breaks, and erosion that comes from being buried under earth and sea for a couple thousand years.

And now, another copy has emerged just down the hall, this one decidedly more contemporary. Just inside the doorway of the US Bank Gallery, in Joshua McGarvey's MAEP exhibition POSTURING, stands a lifesize replica of Mia’s Doryphoros carved with crude precision not out of marble, but out of styrofoam. The white, pockmarked young man has not gained back any of his missing pieces – his arm, nose, fingers, and genitals among them – and indeed has actually lost even more definition in some spots thanks to the terraced strafing of the CNC router that made him. You can imagine the robotic cutter head at the University of Minnesota’s XYZ Lab searching methodically for our hero inside that polystyrene hunk, like Michelangelo freeing David from his marble slab… somehow, the romance does not quite translate. It’s a copy of a copy of a cast, a game of visual telephone played out in near silence and near stillness that confronts us with questions of authorship, integrity, and craft.

Projected onto the wall behind this facsimile, which McGarvey says weighs all of five pounds, is a static video of a black Everlast punching bag standing vertically against a red sweep. The simplicity of the installation makes the experience perfectly weird – the red tones highlight the poorly rendered side of Doryphoros’s face, like pixels made flesh. His contrapposto stance gives the impression that he’s about to throw a left hook at the bag, but of course that arm has been broken off at the elbow. The punching bag, likewise, has been knocked off its chains and stands as quiet and still as its sparring partner. From above, the steady sound of a heartbeat provides the soundtrack, and the entire scene somehow embodies both vitality and impotence all at once. 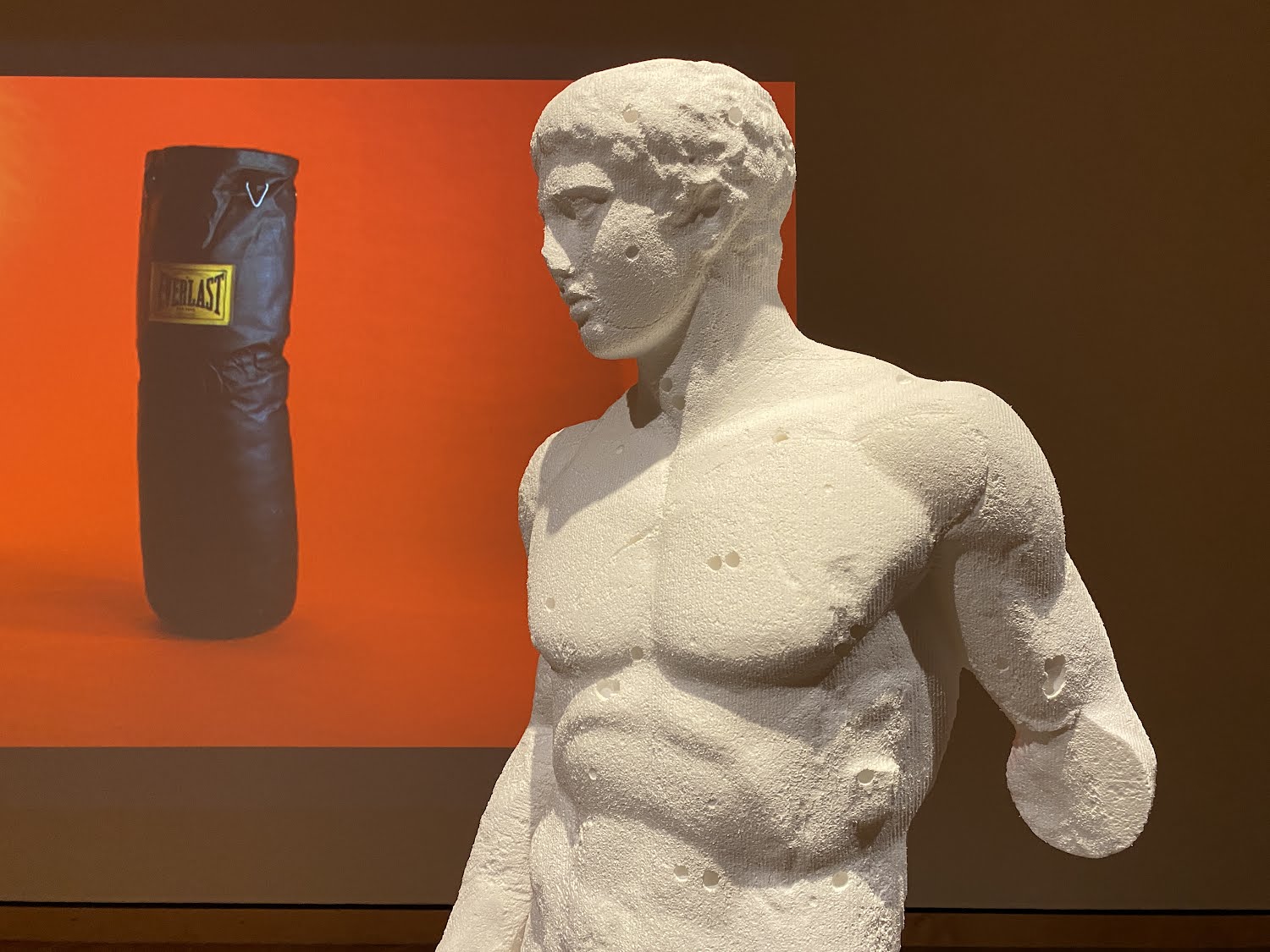 “The styrofoam is more of an apt symbol for us now,” says McGarvey. “It’s permanent” – like the marble and bronze before it – “but very fragile.” In that sense, the piece teeters between honoring our Classical obsessions and critiquing them, although sculptor to sculptor, there is clearly a lot of respect. “The balance in this thing is amazing,” he says.

POSTURING, as a whole, has a nice balance as well. The rest of the show is a mixture of videos and installations – each of them slow and strange, hilariously weird and yet somehow warmly endearing at the same time. As you move into the larger room, you’re greeted by an 18 minute video of the artist, hidden behind a cloth mask printed with an image of his own face, performing an awkward interview through a deep, dolorous voice filter, like he’s giving a studio visit from the witness protection program.

“Well, the story starts when I learned that the ‘If you like drinking Piña Colada’ song wasn’t written by Jimmy Buffett,” McGarvey's droning voice says to the absent interviewer. “Essentially, it blew my mind.”

If you can’t tell by now, McGarvey is having some fun, poking holes in our pretensions around art and artists. In another video, he gazes out for a moment onto a tranquil lakeside scene. Then, with a familiar mechanical clamor, the lake starts to retract, and you realize that he (and you) have just been staring at the inside of a garage door painted into a makeshift green screen. What follows is another bit of strange theater, that you really should just go and enjoy in person. It’s funny, if you have the patience for it, but the artist is not just playing for laughs. 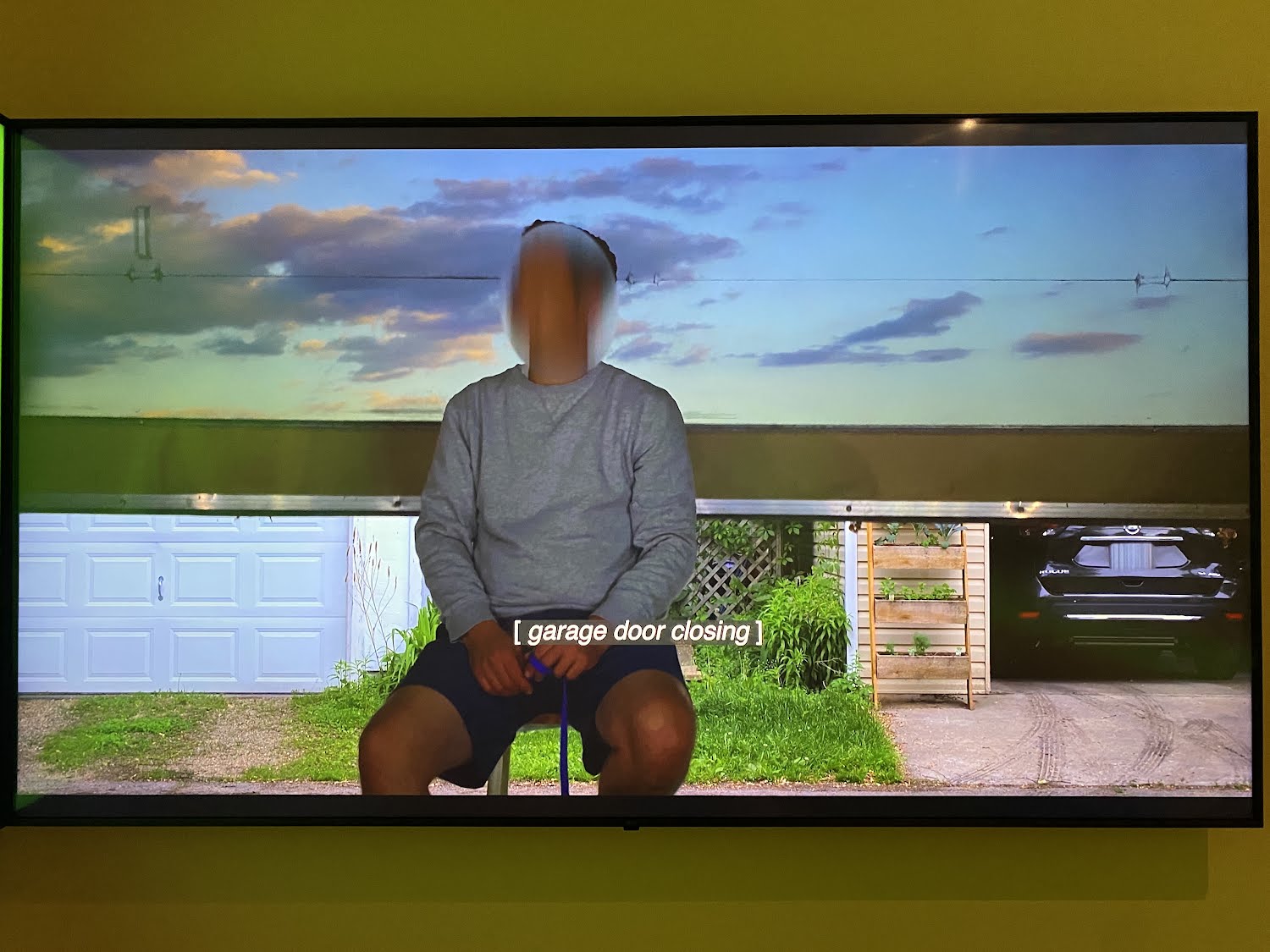 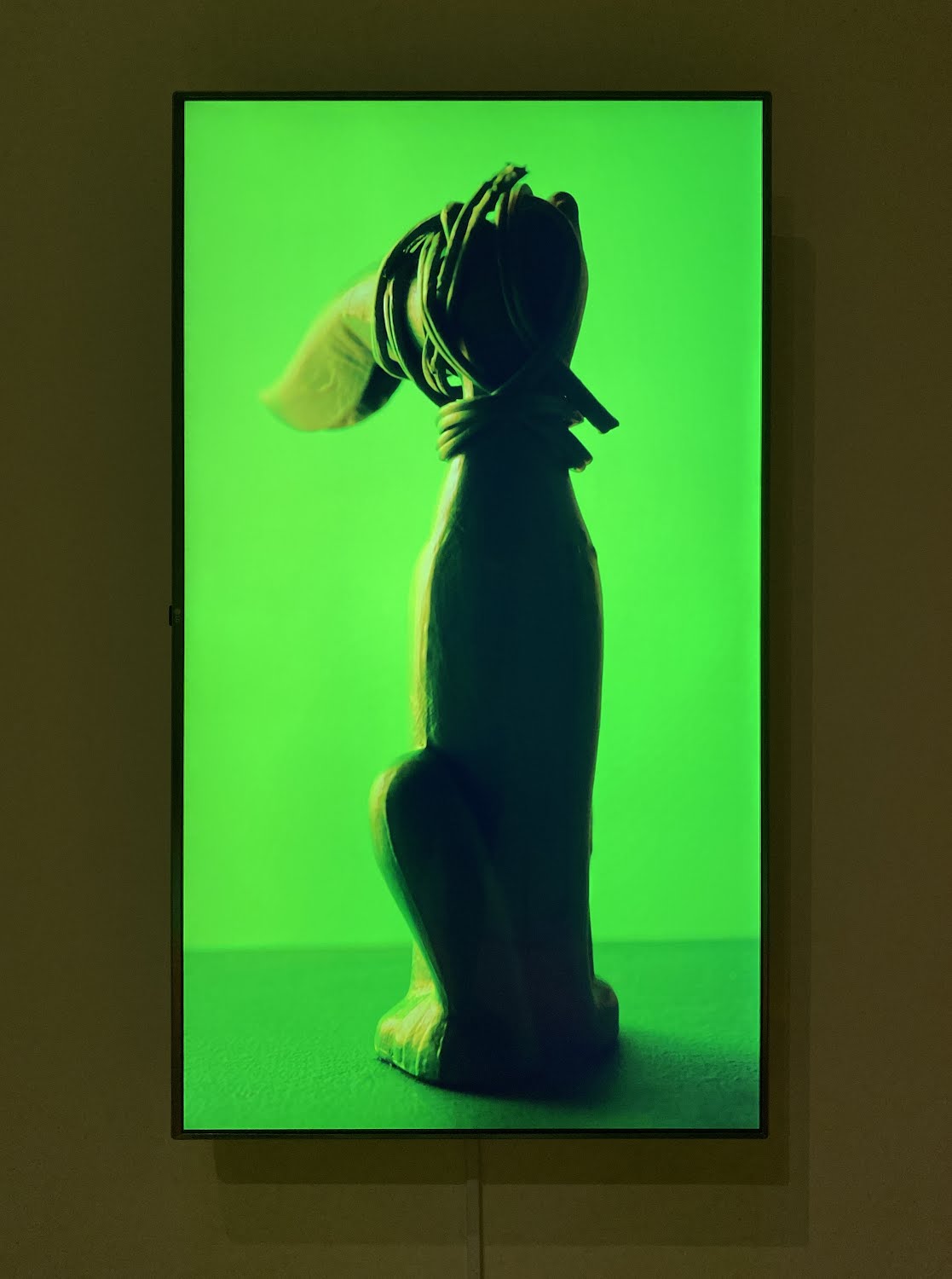 McGarvey’s interests are truth and artifice, and the chroma-key green that brought the lake to life is everywhere in this larger room, in stark contrast to the red glow of the punching bag. This green offers limitless potential in post-production but gives us a whole lot of nothing on its own. It’s a blank canvas, inviting our own projections. You will find, in this installation, an impossibly long spear, an upturned chair, a strange little pincushion assemblage, and a moment almost anyone would recognize from the ceiling of the Sistine Chapel, the whole thing coated in neon green paint, inviting you to fill in the blanks.

At the very back of the gallery, on a video monitor next to the melodrama playing out in the garage, a small green unicorn figurine is getting slowly dousing in even greener globs of paint. This video, too, is 18 minutes long, and I can’t help but feel like it’s the cleanest, clearest indictment of the artist industrial complex in the whole exhibition. The mass-produced symbol of mythological uniqueness slowly loses its features under the viscous weight of infinite potential. What did Doryphoros mean to Polykleitos, or to his model, or to his audience, when it was first unveiled? What, then, a few hundred years later, did the intellectual theft of Greek idealism mean to the Romans? And now, after all this time, what does that object mean to us?

That depends on who you ask. In an interesting coincidence, this show opens on the heels of an Italian court demanding the return of Mia’s Doryphoros, on the grounds that the antiquity was illegally excavated in the 1970s and exported to the private market, prior to the museum’s purchase of the piece in 1986. Nevertheless, our old fellow is still on display, his future now as murky as his past. Like the rest of us, Mia is waiting to find out more. “We have seen press reports that a court in Naples, Italy, has called for the return of a work of art in the museum's permanent collection," explains the museum's Public Relations Manager Allie Johnson. "We have not been contacted by the Italian authorities in connection with the court's decision. If the museum is contacted, we will review the matter and respond accordingly. Mia is committed to doing the right thing.”

For the time being, while both spear-bearers are in the same building, you should really have yourself a look. McGarvey’s show doesn't end when you leave the US Bank Gallery. On my way out, I sought out the real thing and was surprised to find myself looking at the marble statue with fresh eyes. The details were crisper, the flaws more intriguing. The mysterious story of this ancient object had come to life again, in my mind, thanks to those five funny pounds of styrofoam.

With this, McGarvey lands his final punch: the real green screen is the museum itself – the soundstage where incongruous objects like these can meet and share meaning. The key is in the context, or, sometimes, the lack thereof. ◼︎ 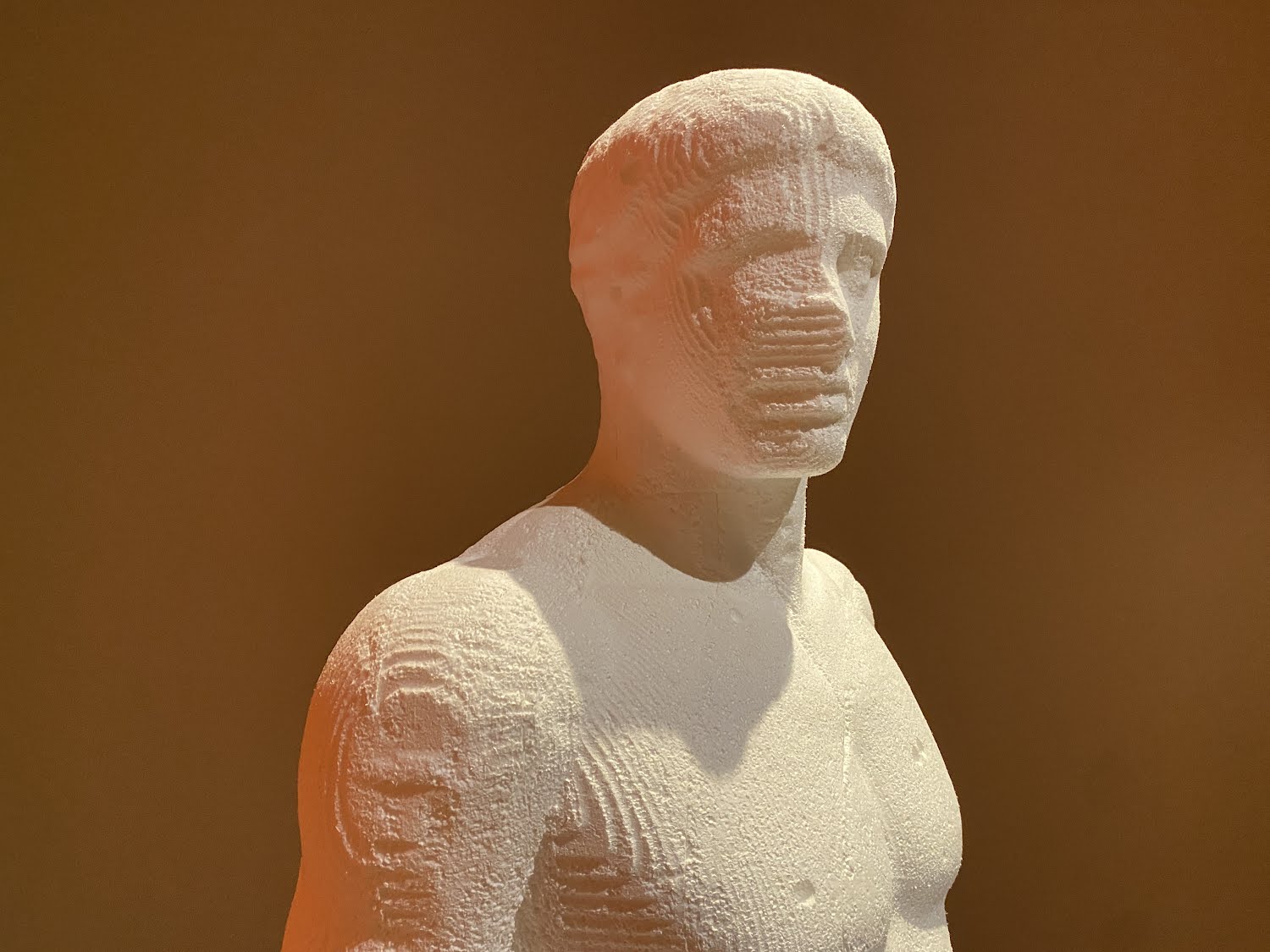 POSTURING is on view at the Minneapolis Institute of Art through October 30. Admission is free.

Banner image: screenshot of Untitled 001, video (no sound) on a continuous loop, 2021. All photos by the author.

You can read a previous review of the artist's work by Liz Mauban here, from 2020.