The Message is the Medium: The Radical “Reality Art” of Andrew Moore

Known previously for elaborate and provocative art installations on his front lawn in Powderhorn Park, Moore and curator Joan Vorderbruggen bring his work to NE Sculpture

I don’t think it’s a stretch to say that what is currently on view at NE Sculpture is not your typical white cube installation. Down in the subterranean gallery space, a series of hectic, haphazard assemblages fill up the room, pieced together with found objects, collaged news clippings, plastic tubing, and frenetic energy.

“When you’re a real artist and you’re doing it for the cause, it doesn’t really take a lot of time,” explains Andrew Moore, the architect of this construction. “It flows easy.”

The Promised Land: How Do We Change This, which closes on Saturday, is a collection of recent sculptures, paintings, collages, and clothes Moore has created, all centered around the singular cause of exploring, explaining, and — as the title suggests — changing the root causes of trauma in Black American communities. It is bold, unflinching, and rough, in more ways than one.

Near the entrance, you first encounter a wooden boat on stilts with a cut-out of Minnesota standing as its sail. The ship of state, you might say, in this case covered bow to stern and tip to tail in references to violence. Collaged across it all are white cops, Black death, a fat pink pig in a tuxedo, and a black mannequin torso covered in names-turned-hashtags: Crawford, Bland, Rice, Garner, Sterling, and more. Newspaper articles plastered to the port bow tie those deaths to another episode a full century prior: the 1920 lynching of three Black men in Duluth. It's a startling, literalist approach to historical narrative, a cold dash of water on the myth of Minnesota Nice. Welcome to the art show. 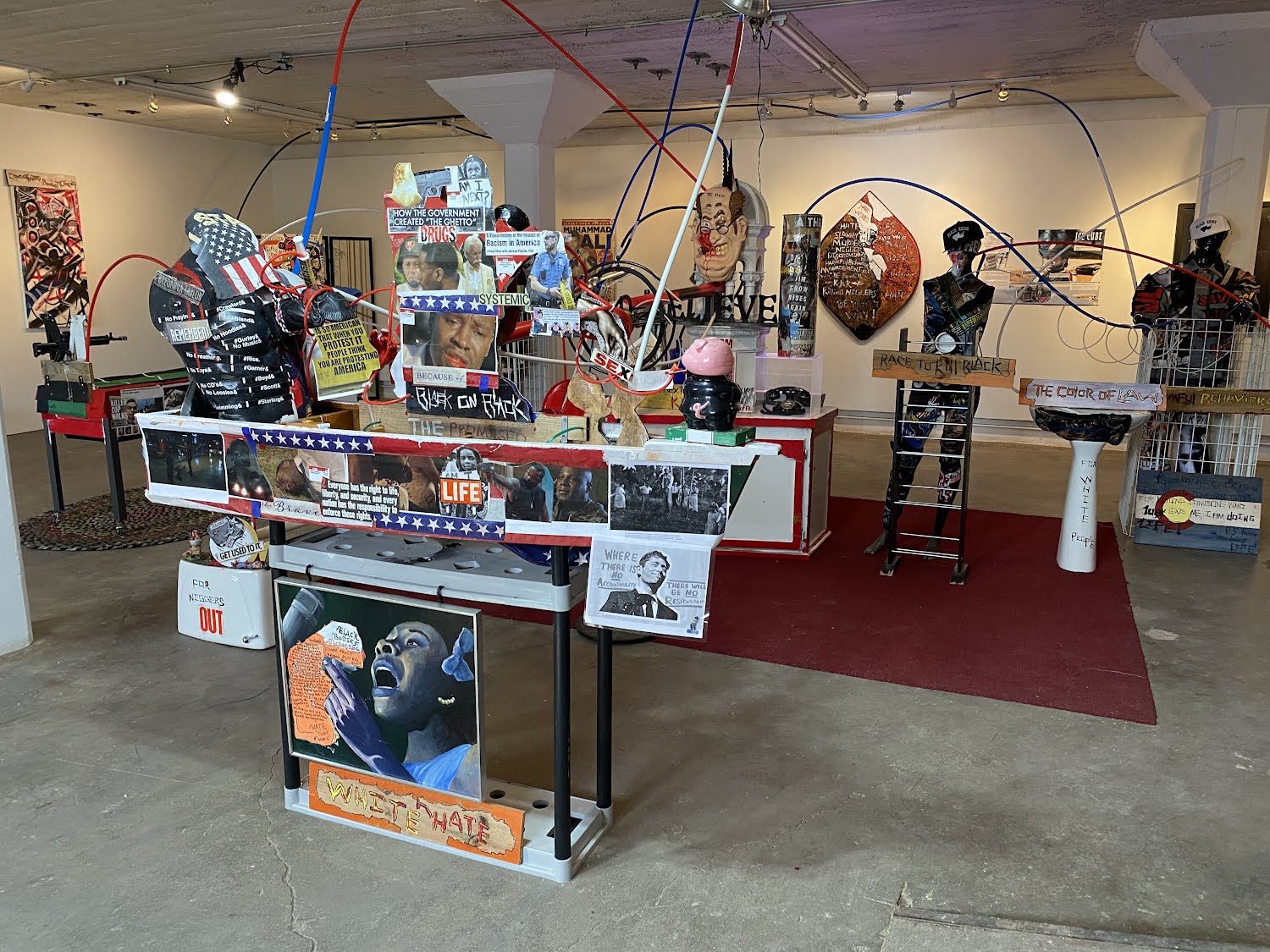 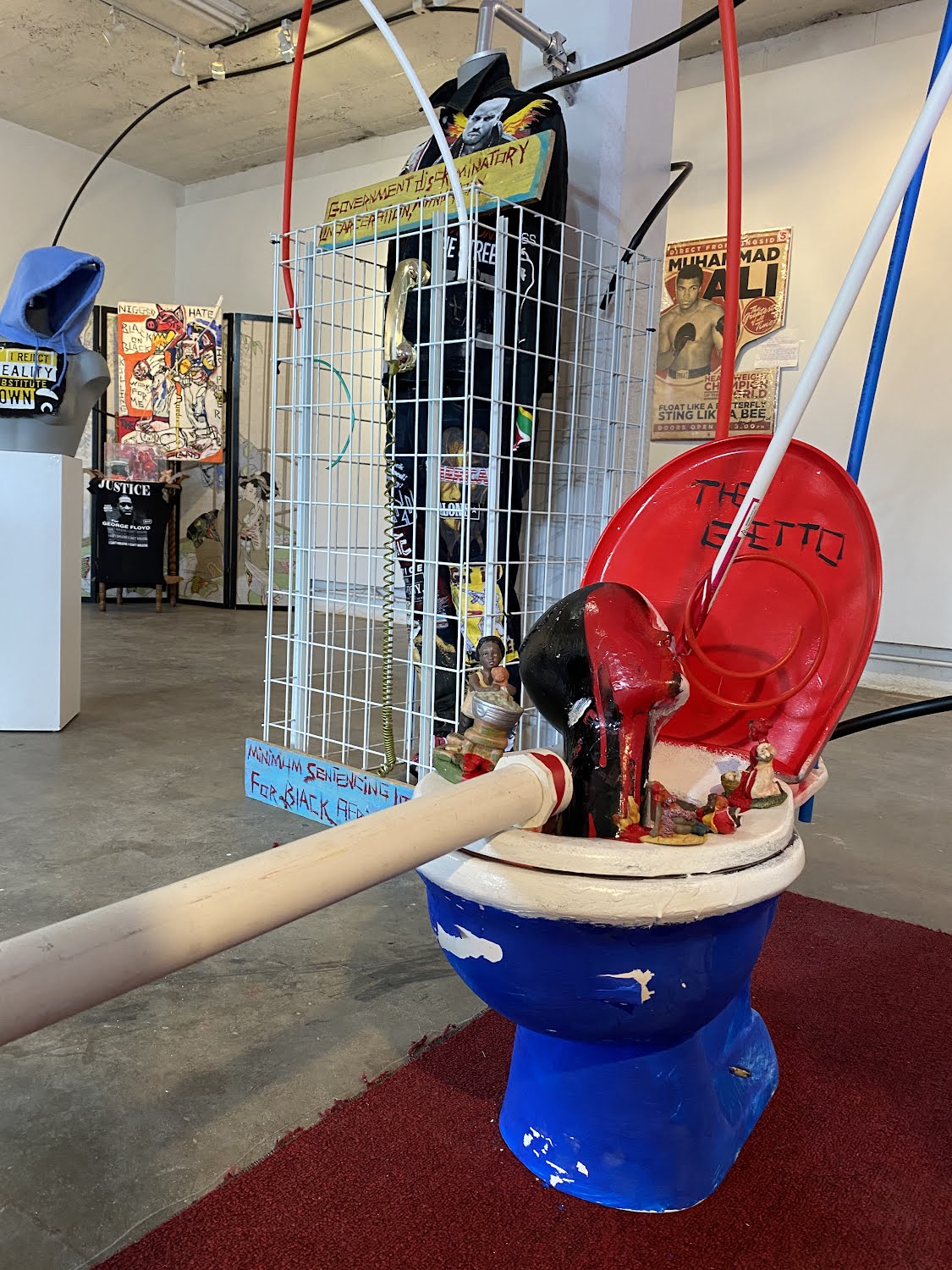 From there, red, white, and blue tubes fly up off of the boat, leading to other, wilder assemblages, each one crudely assembled, scrawled with messages, and speaking in the angry, relentless language of political satire: toilets and guns and cages and coffins. The metaphor of the tubes is clear: local politics, national power systems, the pain of some communities, and the complicit wealth of others are all connected, like a closed system, a single body.

You should know before you go, the work here does not have the polish of a typical gallery exhibition, or of contemporary artists working around the same themes. Jordan Weber and Hugh Hayden both come to mind — two artists among many who use the language of contemporary art to speak truth to power. Moore’s work is not crisp, clean, and clever in the same way. His objects are found, not crafted; his assemblages are jerry-rigged, not engineered. But still, the same urgent weight of history grounds his work, just as it should ground us all.

There’s a term in the art world for creative expression like Moore’s: “Outsider Art.” But outside of what? Certainly not outside of history: Moore’s work is steeped in it, from Frederick Douglass to Malcolm X, Billie Holiday to Biggie Smalls. And certainly not outside of cultural precedent either. Moore came to local fame about ten years ago for showing these politically outspoken sculptures not in a gallery but on his front lawn in Powderhorn Park, working in the rich tradition of so many so-called folk artists before him. Simon Rodia’s Watts Towers might be the most famous, though a closer comparison would be Joe Minter’s 30-year-long installation of African Village In America at his home outside of Birmingham, Alabama.

Indeed, “Outsider Art” is a cultural niche all its own. The term typically denotes self-taught makers — you could say outside of academia, but definitely not outside of the art industry. Dealers and collectors have been trading in these rough-cut treasures for years. The Outsider Art Fair just celebrated its 30th anniversary in January. And the intelligentsia are catching up to the salesmen, as curators give these artists more space and scholarship away from the auction block. 2018 saw an exhibition at the Metropolitan Museum of Art highlighting a variety of pieces by Southern artists, quilters, and craftspeople that had been gifted to the Met a few years earlier. And in 2019, one of Minter’s assemblages — made of toys, tires, shoes, and license plates, not so different from Moore's own work — was curated into the Whitney Biennial. The outside had been brought in.

What Moore's work does exist outside of is “polite society.” Dressed in one of his home-made suits collaged with images, slogans, and bright yellow stripes, and topped with a Black Panther beret, the artist stands tall and stands out. He brings the artwork with him everywhere he goes. When I ask what kind of reactions he gets to his clothing, he says, “I get a lot of conversation." And, with a laugh, "I get a lot of surprised looks, too." 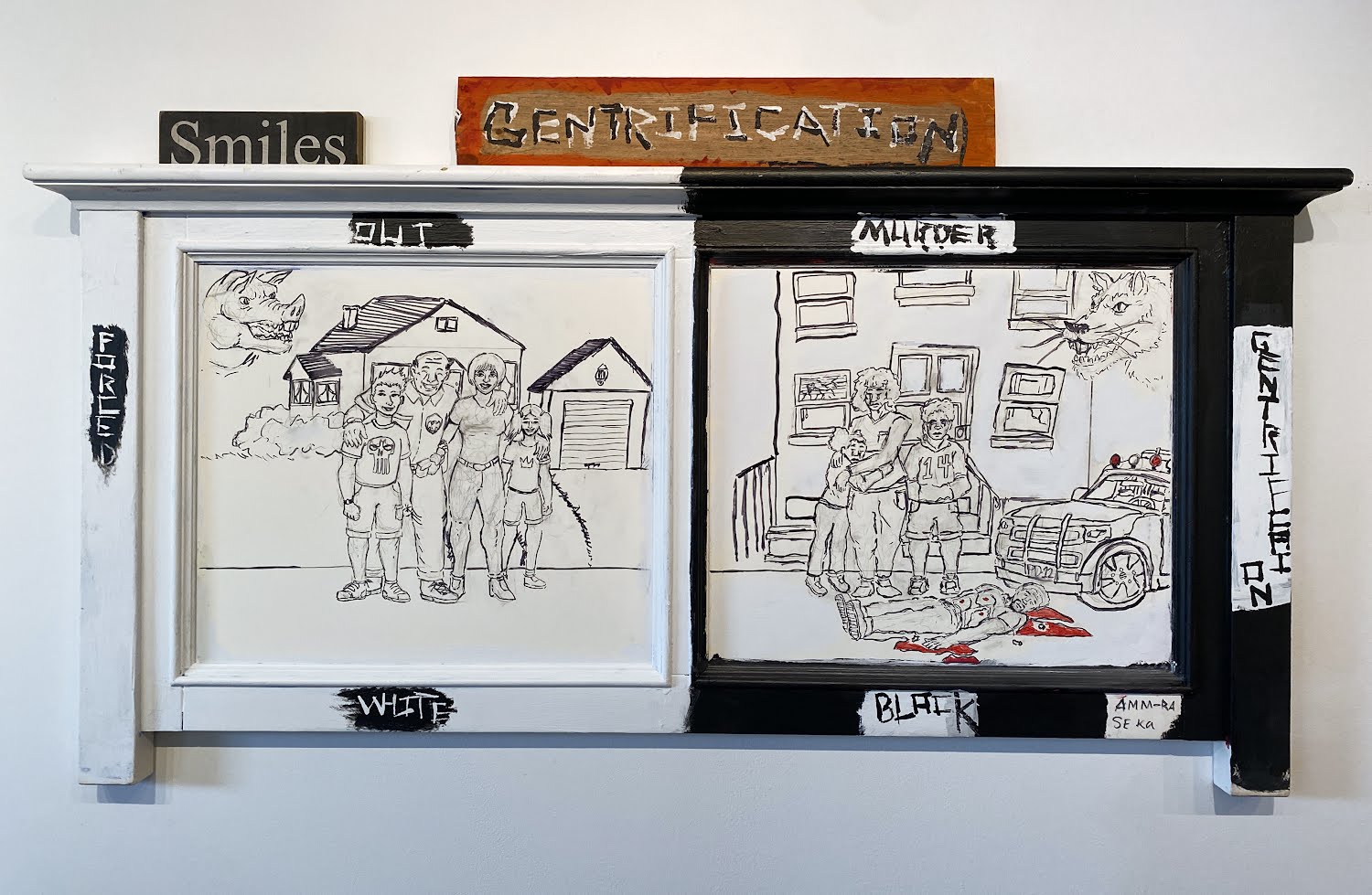 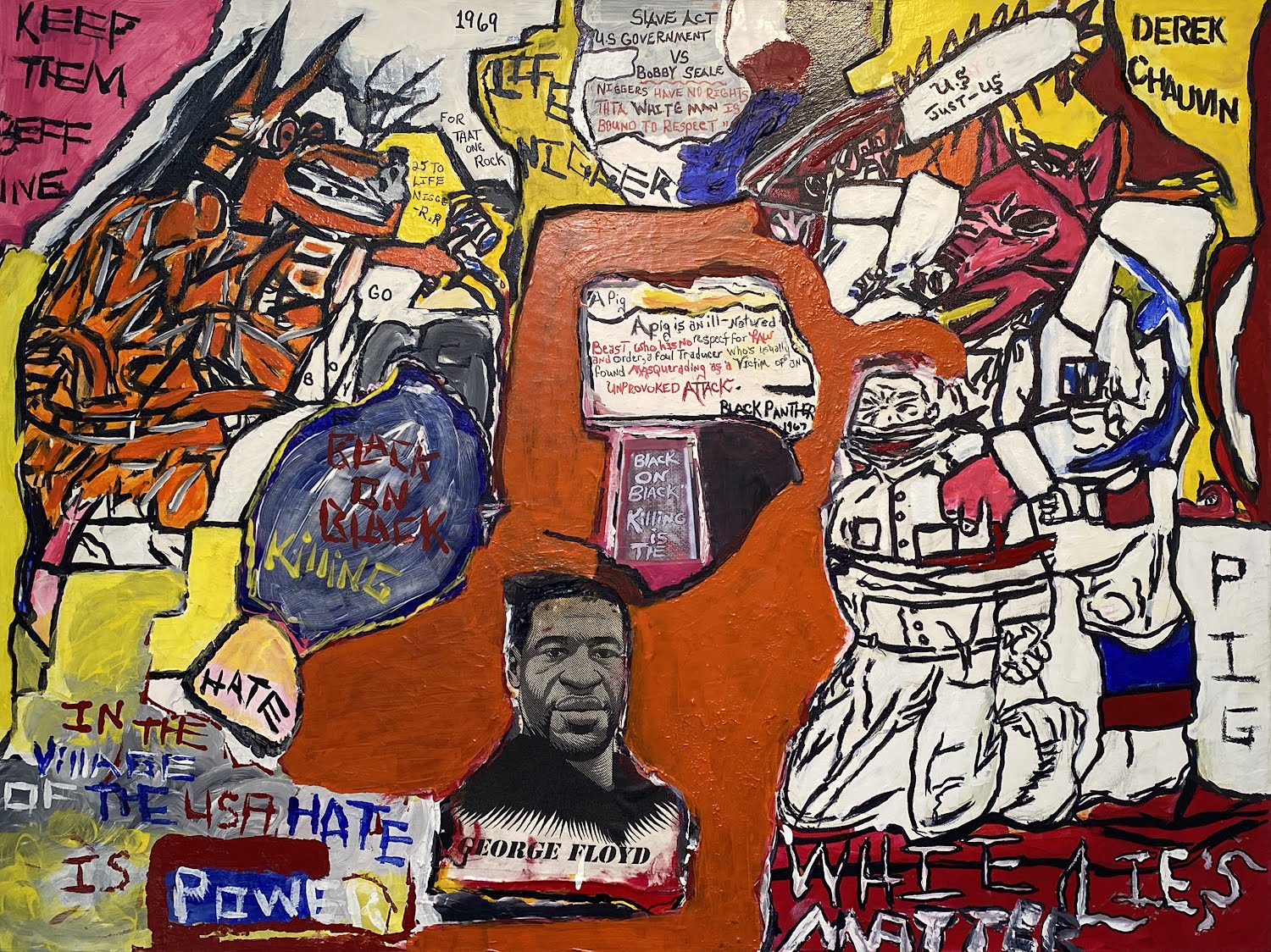 Lining the walls are more collages and paintings, some of which are collaborations with a younger artist, illustrator Amm-Ra Seka. The paintings rage against gentrification and police brutality; menacing pigs stand brutish and muscular like minotaurs. Below them, in a plexiglas box, a bunch of little white figurines happily frolic in a holiday diorama. Another piece corrects the Bill of Rights to read the Bill of Whites, again scrawled in Moore’s distinctive hand. And next to that is perhaps the most impactful and understated piece of them all: a store-bought frame hanging empty and unaltered on the wall. It's one of those "collage frames," with 41 little windows cut into the mat for your family photos. The artist has not touched it — no slogans, no commentary, just the faded stock photos of happy families: babies, grandparents, smiling couples at the beach, gleeful children building a snowman. It takes you a moment, but then you see the point: they're all white.

Some will scoff, to be sure. If you caught any of Judge Ketanji Brown Jackson’s confirmation hearings this week, you witnessed firsthand that disingenuous blowhards are eager to bulldoze past any real discussion of America’s deep racism — and that those blowhards inhabit some of the highest seats of power in the land. Of course, those attitudes exist everywhere else in our polite society as well, lurking quietly across the entire political spectrum (our own Mayor Frey, for example, makes an appearance on the ship of state).

Moore’s affiliation with the Black Panthers and his unabashed approach to difficult subjects makes it easy to paint him as a radical. The work shares the tone of early, politically conscious hip hop: as militant as Chuck D’s lyrics, as dense as the Bomb Squad’s production. Aesthetically the work connects with punk rock as well, whose visual sensibility was defined by angry, sardonic collages. But the message at the core of this work really shouldn’t be radical at all. There aren’t any Black Lives Matter signs in The Promised Land, but the fact that such a plain and powerful statement is a matter of contention in this country is proof positive that our problems are far from resolved. Still, as Moore says, “If it wasn’t for the radical people in this country, there would be no change at all.” That is the damn truth.

There will be some who will scoff at the craftsmanship here, as well. With artworks, of course, context is key. Showing these works in a gallery is very different from showing them out in the neighborhood. For one, the audience is different. “I hope that [people who visit this show] can grab the concept that this is something we live everyday,” he says. “You don’t. You get a chance to walk in here and suck it in and evaluate how life really is for people of color. Especially now in Minnesota. Minnesota is like the new Mississippi. I hate to say it.”

The work is rough and strange, against the grain of most gallery standards and likely even out of vogue to some degree for many activists out on the streets. The revolutionary sense of Black Joy that has been showing up defiantly on murals and in museums recently is not as evident here. There is a lot of love, though, most poignantly in the funeral bulletin for Moore’s sister, who passed away shortly before his show opened and to whom the exhibition is dedicated. Where the work will go next is anyone's guess, and I wonder what the effect would be to see this not on his lawn and not in this small gallery, but in a grand rotunda or a museum hallway. Would it change it, would it cheapen it, or would it simply reach a wider audience?

The term that Moore uses to describe his work is "Reality Art," a reflection of his lived experience as a Black man in the American Midwest, someone who has lived inside of the carceral system and come out the other side railing against injustice. Near the end of our conversation, I ask him what he thinks of being described as an "Outsider artist" instead.

“Outsider artist?” he asks, pausing to consider the term, trying it on maybe, like one of his jackets. He answers in a near non-sequitur — the call sign of a collagist: “I would say a lot of people call me Knowledge.” ◼︎

All photos by the author.

The Promised Land: How Do We Change This is on view at NE Sculpture | Gallery Factory through March 26th. Gallery hours are Thursdays, Fridays, & Saturdays 12 - 5pm or by appointment. You can see more of Andrew Moore's work on Instagram @andrewmoorerealityartist.