Ranging from whimsical sci-fi to studied landscapes, Sauer brings a fun mix of techniques to the 2021 MPLSART Sketchbook Project

John Sauer (he/him) is a Minneapolis artist, painter, and illustrator. Sauer’s work aims to not only connect with people, but to offer an interesting perspective on the world through a wide variety of themes and visuals. As one of the 70 artists who participated in our 2021 Sketchbook Project, we wanted to do a deeper dive into his expressive practice. Here he reflects on his persistent desire throughout his life to create, no matter the medium. Throughout Sauer’s creative endeavors there are consistent thematic narratives, and it all adds up in some way or another into something he calls a ‘visual mix-tape.’

Camryn Smith: How did you begin creating and why did you feel drawn to making art?

John Sauer: I've been making some sort of art my whole life and had parents, teachers, and friends encouraging me all the way. It's the one thing I've always been pretty good at. I had some vague plan to go to college and then do something art-related, but after changing majors a few times, I left UWM to move to MPLS and play in a band with friends that were already here. It was a lot more fun than what I was doing! That lasted for a little while.

At some point I started messing around making band posters and doing cartoony stuff for local zines. A friend who was doing design work gave me a music magazine illustration gig, and that was it! It never occurred to me before that I could make money doing fun stuff. Of course, in hindsight I was looking in all the wrong directions. Over time I met a lot of nice folks that gave me a chance and I was able to basically learn as I went along.

I spent the next couple decades mainly doing illustration work, and occasionally painting pictures on the side for my own amusement, or the occasional commission. After the 2008 recession, a friend gently nudged me into showing art. That went well and I started to transition to doing art/painting nearly full time. I often feel that I came at this sort of backwards with the help of a lot of friends, but that it was an almost inescapable path. I've always been drawn to making art and would be doing it in some capacity no matter what or where I was. 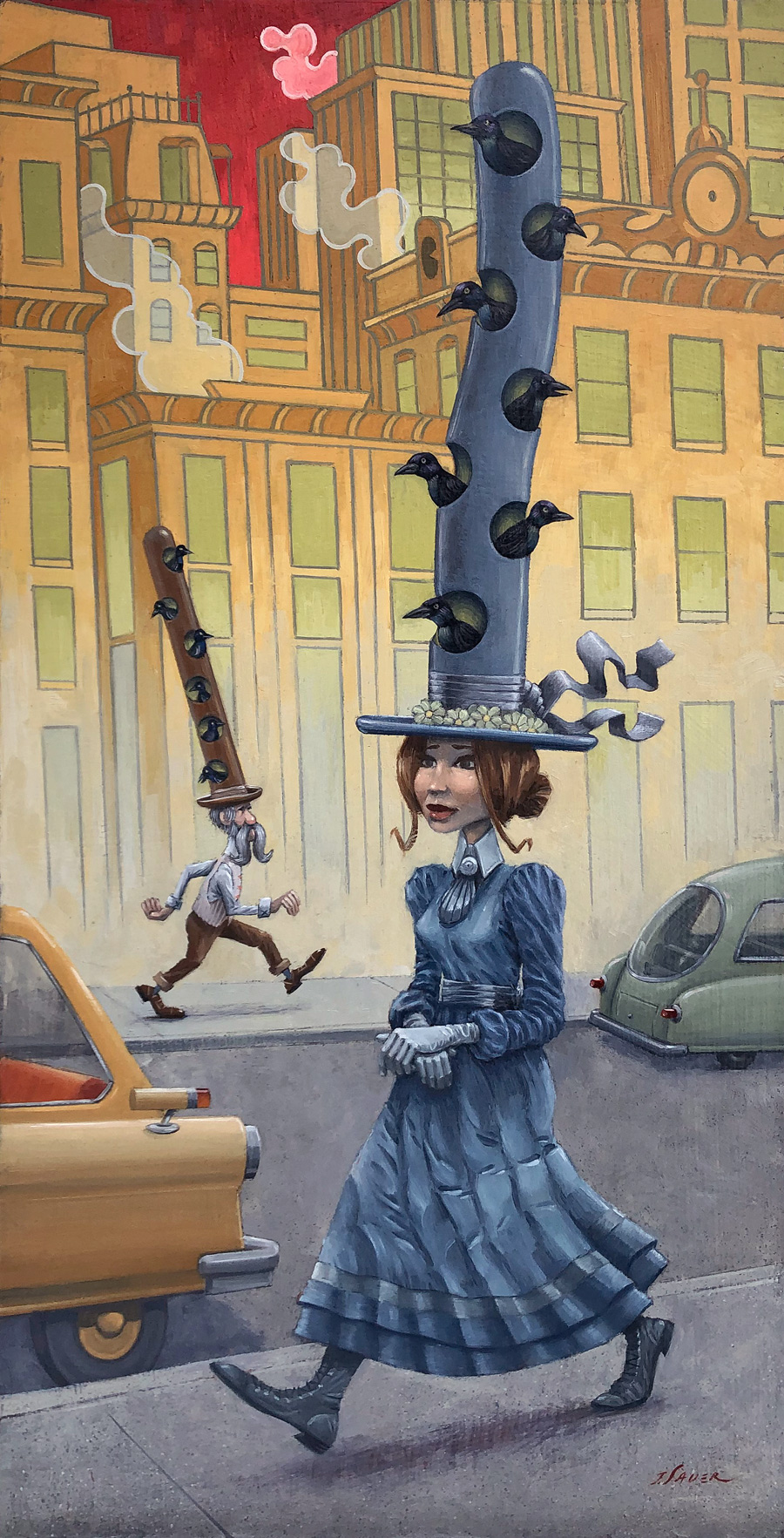 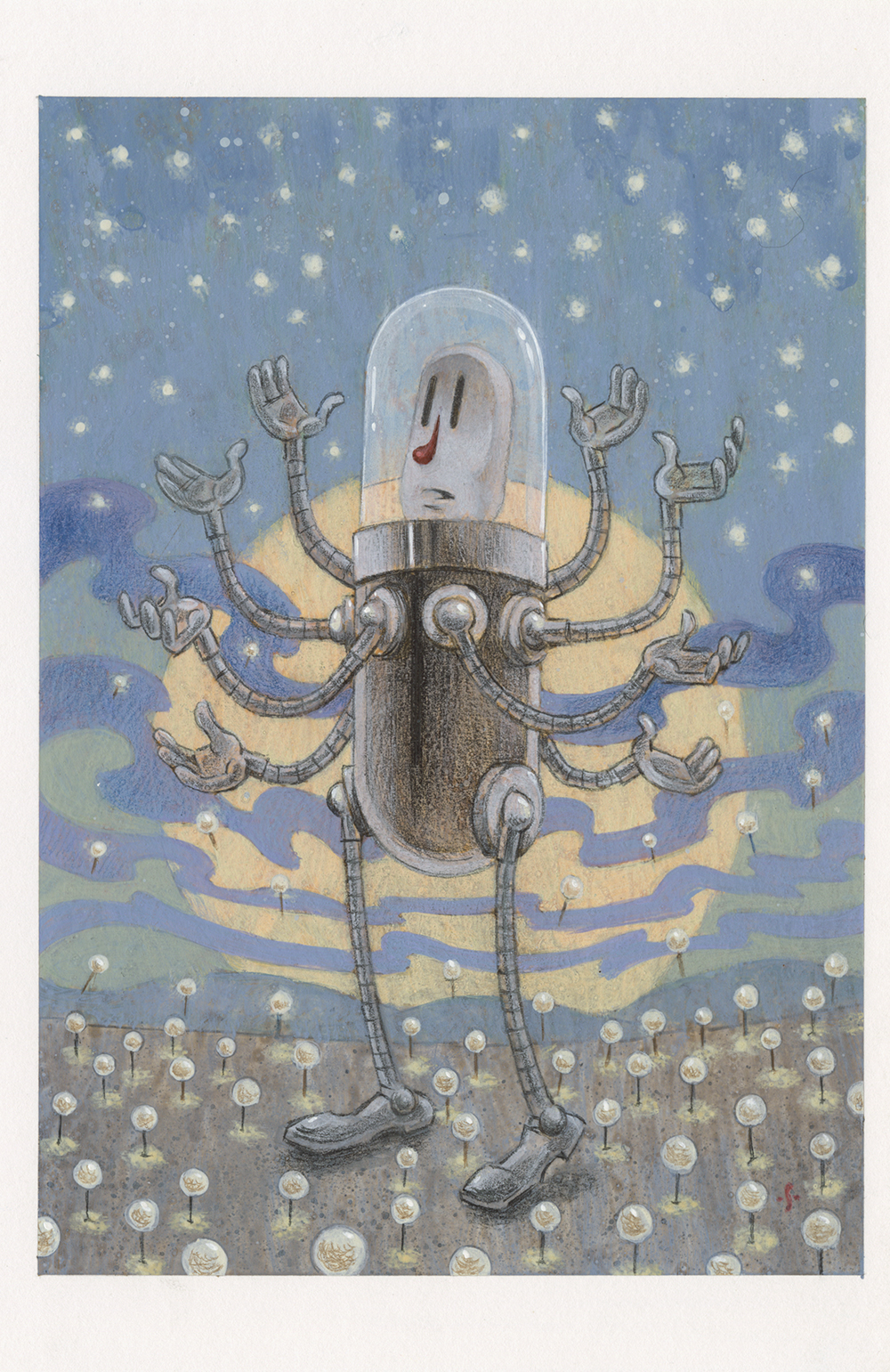 CS: What does creating bring you?

JS: Primarily the satisfaction of doing something uniquely my own. That may not have been the same answer at one time. For a while I loved the utilitarian aspect of illustration work, just doing a picture for something — whether it's an ad, a label, a poster, a game, a magazine, catalog, etc. etc, and then moving on....next! I loved the challenge of that.

Now it's more personal; I much more enjoy expressing my feelings, or trying to make sense of modern life, people, and the world. That can be in both realist painting or surreal painting, from time to time I switch between them. I love doing landscape and still life as much as surreal art, I’ve always thought of them as different sides of the same coin.

I'd love to find time down the road to explore more figurative work too. I always enjoy working on new things, stretching my boundaries, and getting out of my comfort zone. It can get frustrating, but there's always the payoff, that rewarding "ah-ha!" moment when things click. Along with all that, the satisfaction of connecting with people.

CS: What about your practice is challenging for you?

JS: I have a tendency to be both a procrastinator AND impatient. I'll find a million excuses to put off starting something and then get impatient while I'm working on it. I want to be working on the next one...which I'll end up procrastinating. On the other hand, I can't stand putting anything out in the world that's half baked, so I tend to put a lot of time into each painting. Which leads to the biggest challenge of all — that there's not enough hours in the day!

CS: Why did you choose to participate in the 2021 Sketchbook Project?

JS: Tony Cheng (who did awesome work in both the sketchbook for last year's Project and for the show at Gamut) was kind enough to ask me if I'd be interested in doing it this year and threw my name in the hat. I missed last year's and had the sads and a bit of FOMO, I seem to miss all the calls for stuff like this, so I jumped right on it. What a great project idea!!

Sketchbooks have always been an important part of the process for me, and I always have a variety of sketchbooks on hand. In the past, I'd sketch anywhere, any time, every day. Recently, sketchbooks are mostly work related, and are a mixed bag of notes, preliminary drawings, and often pages of doodles that seem nonsensical; however they often end up as seeds for larger ideas and paintings. 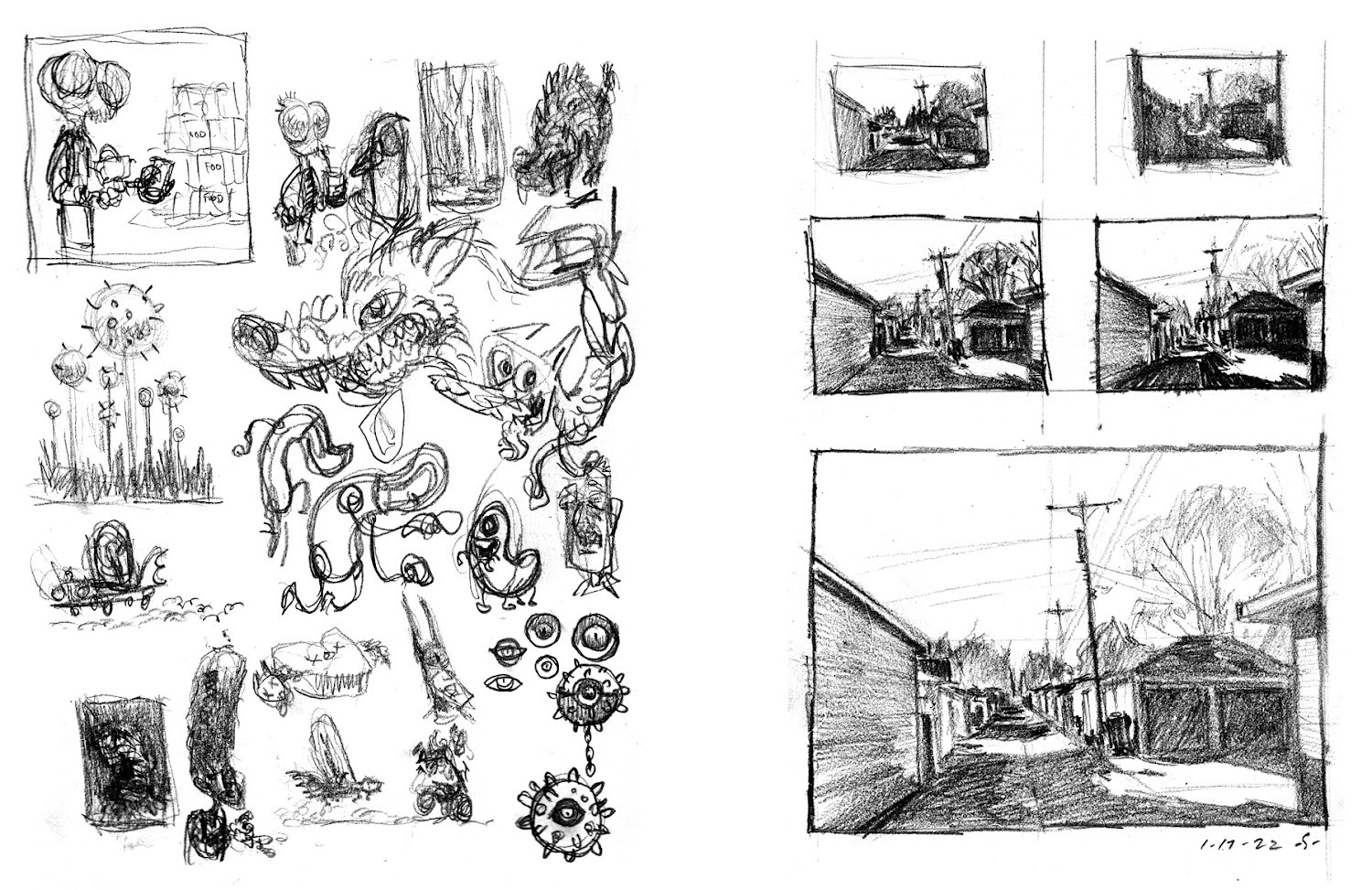 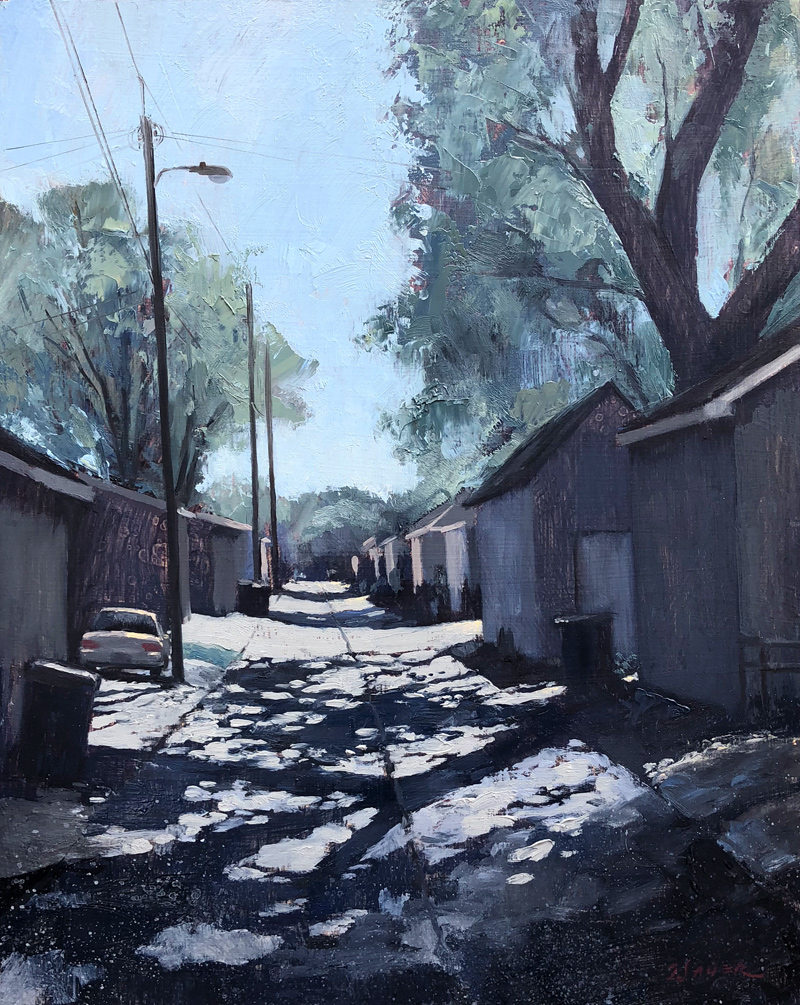 JS: I do! As part of this Sketchbook Project, I'll have a new painting in the group show at Gamut Gallery in March.

I'm also participating in three other group shows on the horizon:

• Unloved Creatures 3, a group show at Rogue Buddha Gallery (NE Mpls.) in May.

• Beautifully Bleak, a group show at Brassworks Gallery (Portland, OR) opens May 7.

All four of those shows are loaded with amazing talent. I'm honored to be part of them! In addition to this I always keep the internet updated: Instagram - @johnsauerart and my website - johnsauer.com  ◼︎ 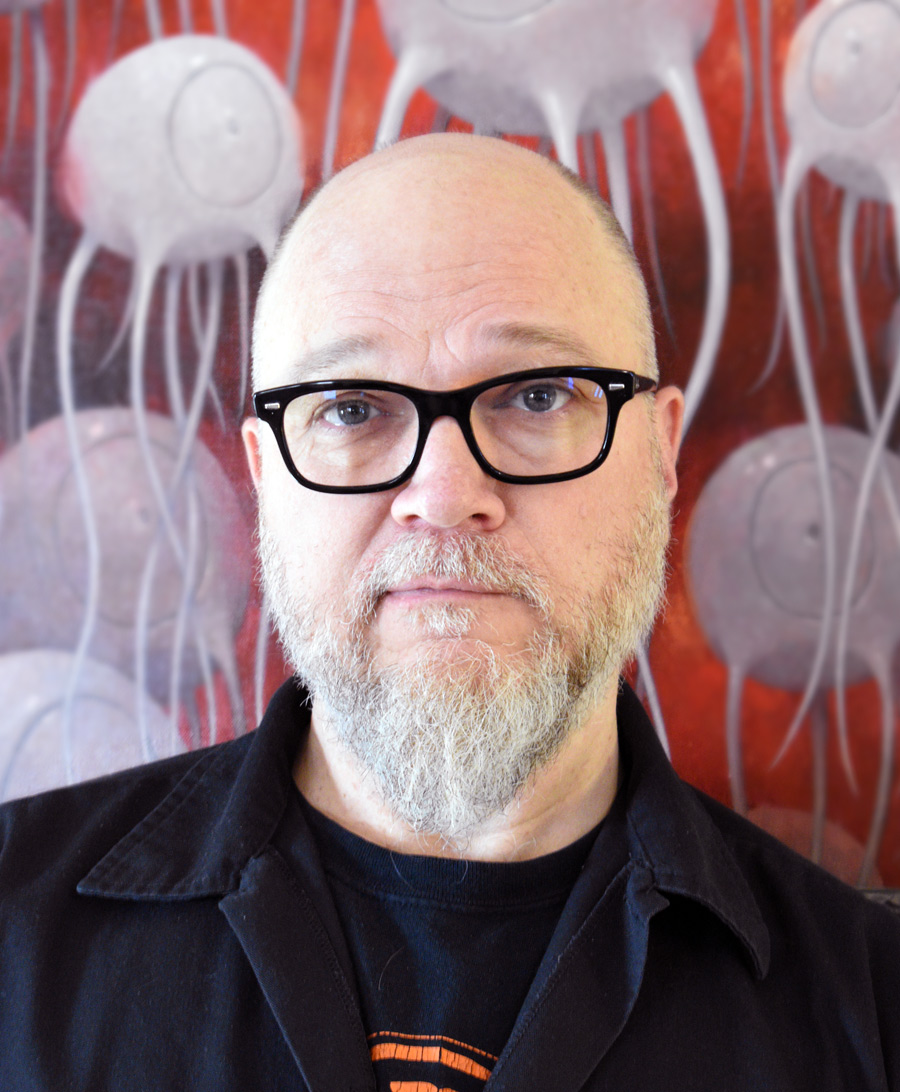