With a deep heart and a razor wit, the cartoonist, muralist, printmaker, and installation artist illuminates the past and our place in the present

Article made possible thanks to the McKnight Artist Fellowship Program

This is the second in a series of articles profiling the six distinguished artists chosen as 2020 McKnight Fellows in Visual Arts, a grant program for mid-career artists in Minnesota that is administered by the Minneapolis College of Art and Design. The 2020 cohort includes Eric J. García, Seitu Ken Jones, Catherine Meier, Teo Nguyen, Meg Ojala, and Maria Cristina ("Tina")Tavera.

If journalism is the first draft of history, then political cartoons are the angry doodles scribbled in the margins. We typically see a cartoon only once, in the context of that day’s news – a quickie encapsulation, quite often, of the buffoonery du jour. But look back at a political cartoonist’s body of work from more of a distance than a day, and a historical ledger emerges.

Such is the experience of reading Eric J. García’s cartoon series El Machete Illustrated: many of the drawings will jog your memory. The caging of migrants on the border, the abandoning of interpreters in Afghanistan, the media’s obsession with Trump overshadowing countless other atrocities. It’s not exactly laugh-out-loud material. But in the ever-deepening ocean of bullshit, these cartoons act as buoys reminding us that we’re not crazy, that these things actually happened, and that quite often there is a pattern.

Like most of us, cartoons did not originate in America. Simplified pictorial representations span cultures and continents, of course, but political cartoons as we know them today first developed in England in the 18th century. Benjamin Franklin is credited with bringing the medium over with his segmented “Join or Die” snake, and cartoons have found a happy home here ever since. They have come to dominate our cultural and political imaginations, whether we realize it or not. Even the Democratic donkey and the Republican elephant first sprang as works of scornful satire from the pen of a snarky cartoonist. García carries on that tradition, as classic American characters like Uncle Sam, Lady Liberty, and Jim Crow act out single-panel morality plays, one after the other. 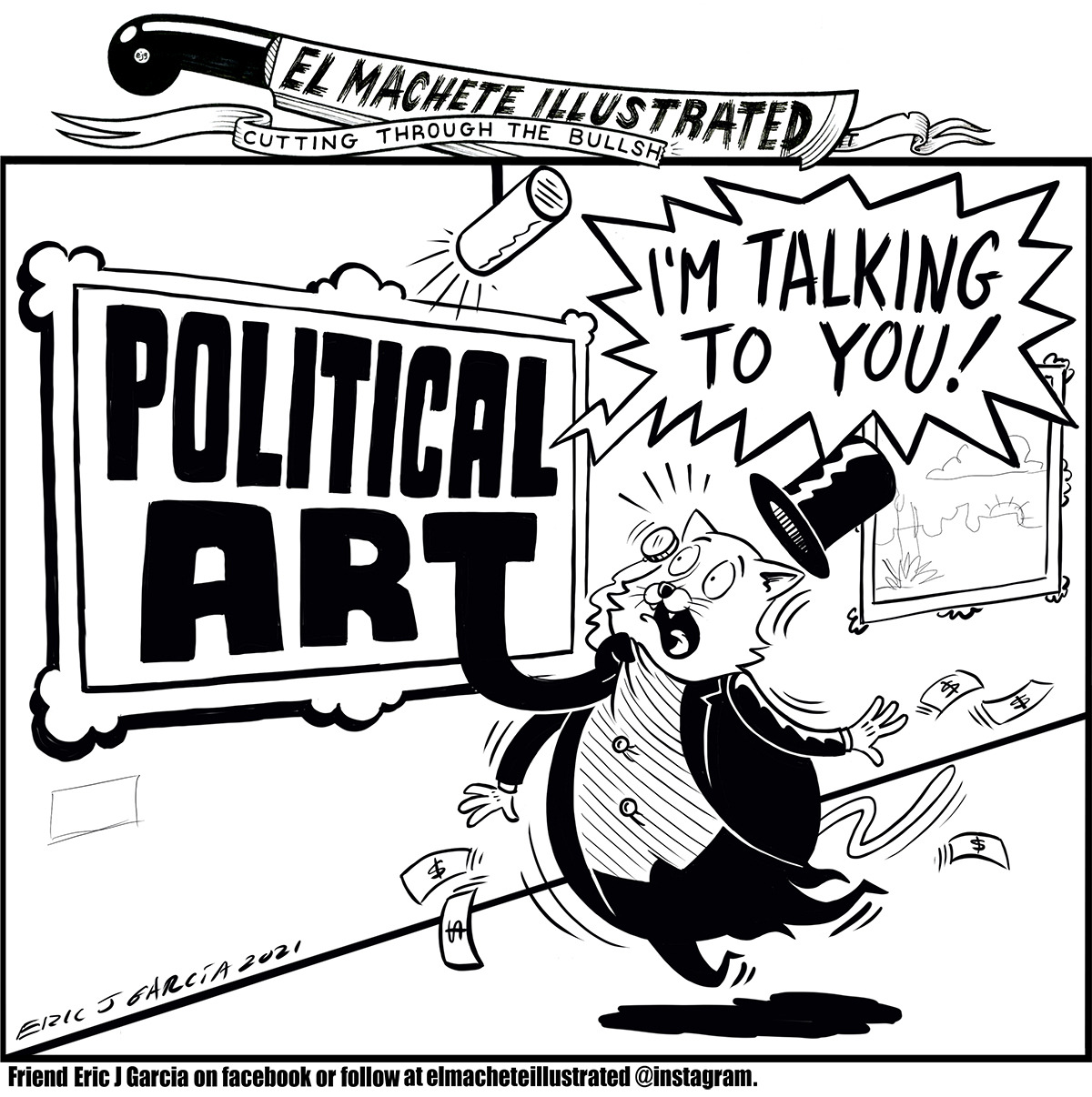 Some of García’s cartoons are more evergreen than others. In one, an ornate frame hangs on a museum wall with just the words “POLITICAL ART” in bold letters. The bottom of the T breaks the picture plane, reaches out like an arm, and snatches a tuxedo-clad fatcat by the collar, his monocle and top hat sent flying in surprise. “I’M TALKING TO YOU!” the word bubble exclaims. The question before so many satirists and activists, though, is are they listening? Or are the artists, with all of that righteous anger, simply preaching to the choir?

“Oh yes, I battle that question all the time,” García says. “My hope is at least that the work I’m putting out there creates some kind of dialogue, that some kind of gear in your head starts turning when you see my work and makes you think a little harder and give a little harder critique of what our society is going through.”

He first took up the medium during his service in the Air Force, when he was stationed in Italy and Greece. “I lucked out,” he says. “I went in between both Gulf wars and then was stationed in Europe for three years. So I got to go see the world’s famous artworks firsthand versus in a history book. I got some money for college, and it was a really good experience even though I was working for Uncle Sam. I was understanding how the beast works, how the US presence globally is overwhelming, and how we are looked upon as a nation from living outside the United States. It was a very eye-opening experience.”

Drawing all the time, his voice as a cartoonist began to take shape. “I was making fun of our lieutenants or the dumb things they made us do,” García says. “I think that’s where I started dabbling in satire and caricature.”

He continued in college, developing his skills at the University of New Mexico’s Daily Lobo newspaper while studying Art and diving deep into his own cultural heritage through Chicano Studies. “Those classes really impact the work I make today. Histories, and heroes and heroines that weren’t in the history books that I wasn’t aware of growing up – I wanted to visualize them and make these objects tools for other people to be aware of them.” 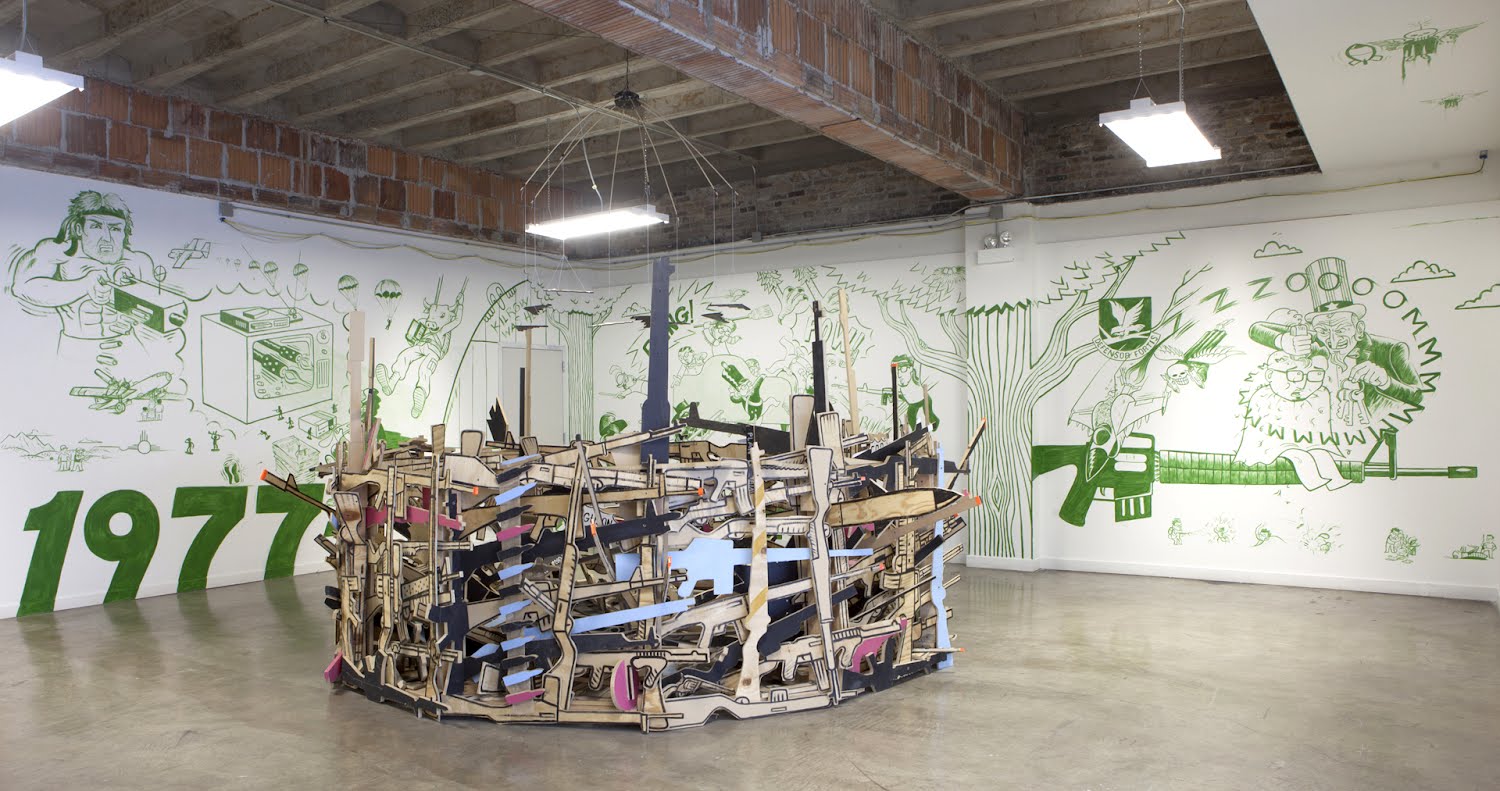 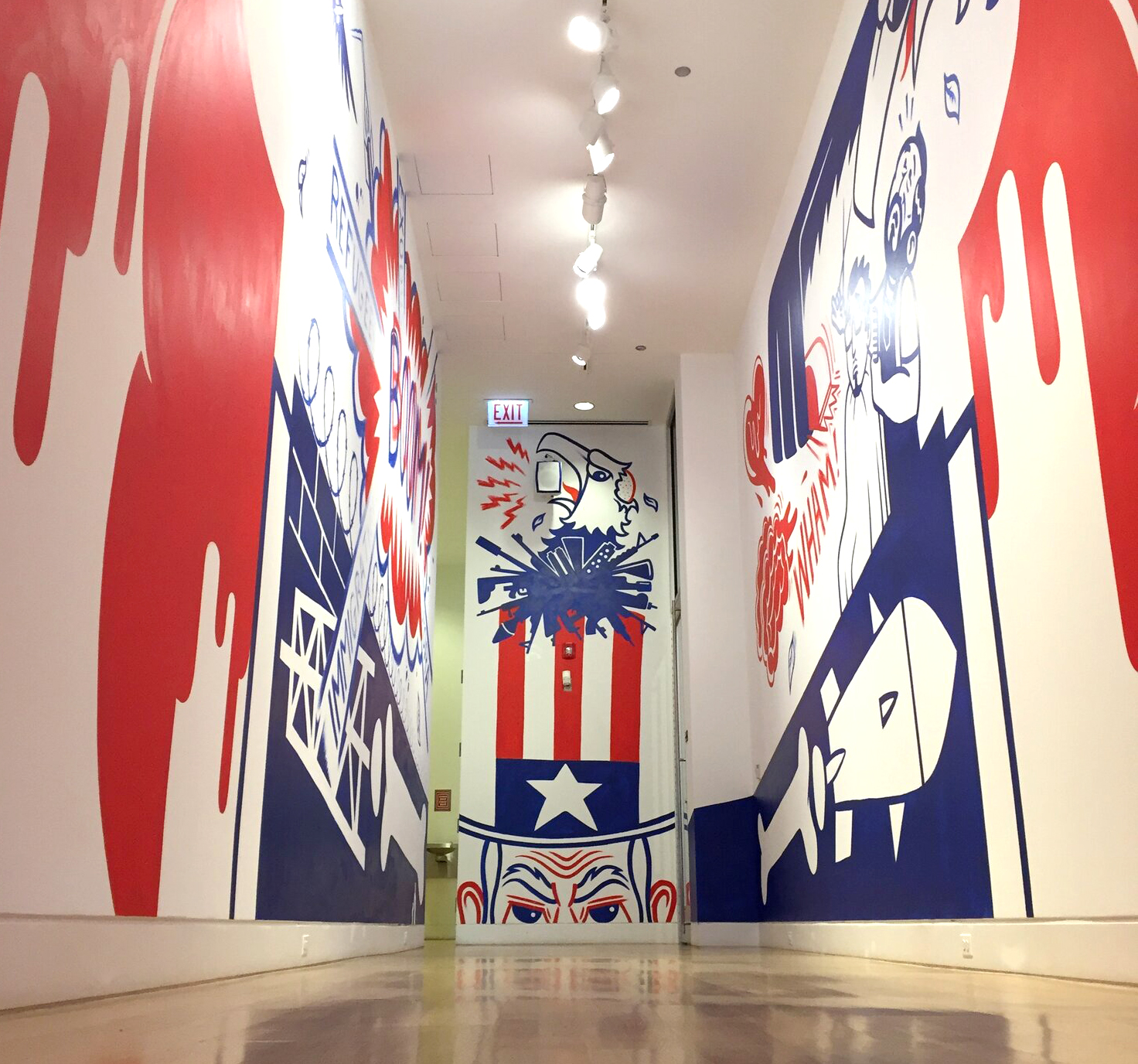 García’s work takes many forms – murals, sculptures, printmaking, projections, and installations – but he remains a cartoonist at heart. And a teacher. In one 100-foot-long mural, he turned the U.S. invasion of Mexico into a six panel Simplified History painted in red, white, and blue. And simplified it is: in this allegory, Uncle Sam knocks down his Mexican neighbor's picket fence, boots him off the property, and rebuilds the fence on the far side of the lawn to keep the neighbor out. In the end, Sam opens the door to his neighbor's former house to reveal an angry cartoon García standing inside, looking back at him. It's the perfect visual punchline to an elegantly abbreviated retelling. As the artist told Chicago magazine in 2016, echoing a famous Mexican and Chicano saying, “my family didn't cross the border from Mexico into the United States. The border crossed us.”

Another series, Uncle Sam’s Dirty Laundry, catalogs some of America’s political prisoners in blue ballpoint pen drawings on white, prison-issue pillowcases, handkerchiefs, and boxer shorts. Beautiful portraits of labor activist Lucy Gonzalez Parsons, A.I.M. leader Leonard Peltier, and Mexican anarchist Ricardo Flores Magón look back at us, embellished with the stories and symbols of their lives. In this way, García is carrying on the legacy of the Mexican Muralists that came before him, like Rivera, Orozco, and Siqueiros, who used their paintings to galvanize, celebrate, and educate their audiences.

“One of the best compliments I ever get is ‘Oh I wasn’t aware of that’ or ‘I didn’t know that part of our history.’ That is important to me: that someone learns something new,” says García. “I feel that my artwork is not just for art’s sake; I think my art is as a tool to learn from.”

When we spoke over Zoom, García was visiting family in Chicago and dialed in from the storage room of the National Museum of Mexican Art in Pilsen. Shelves of neatly stacked boxes loomed behind him, leaving him literally surrounded by Mexican, Latinx, and Chicano history (and, we joked, looking like Mar-A-Lago right before the raid). To be Chicano, he tells me, is to be both “the colonized and the colonizer. You’re the conquerer and you’re the conquered” – descended from both the Spanish conquistadors and the indigenous people of the Americas. “Then you add being born of Mexican heritage but in the United States, and there’s another layer of complexity here.”

His most recent project was the culmination of a year-long residency in Roswell, New Mexico, the American epicenter of UFO conspiracy theories. García, ever the social satirist, took the concept of “aliens” and ran with it, developing a whole new body of work that turns the word in on itself. Audiences expecting extraterrestrials were instead given a history lesson on European colonialism, with García’s signature humor to help the medicine go down. A series of watercolor portraits reimagines colonial figures as pop culture critters: Hernán Cortés as H.R. Giger's Alien, Kit Carson as Star Wars' Greedo, and, best of all, Christopher Columbus as Alf. In another piece, a simple, brilliant mashup puts the “Space Invaders” logo above the “Oregon Trail” covered wagon. And in both a drawing and a sculpture, a Spanish galleon hangs in the air like a spaceship, opening a trap door in its belly to pull two indigenous people up out of their canoe.

“‘Alien’ is a normal official term used in our immigration system,” García explains. “If we use this official term and put it back in 1492, then we can honestly say there was an alien invasion and there were alien abductions that actually happened.” 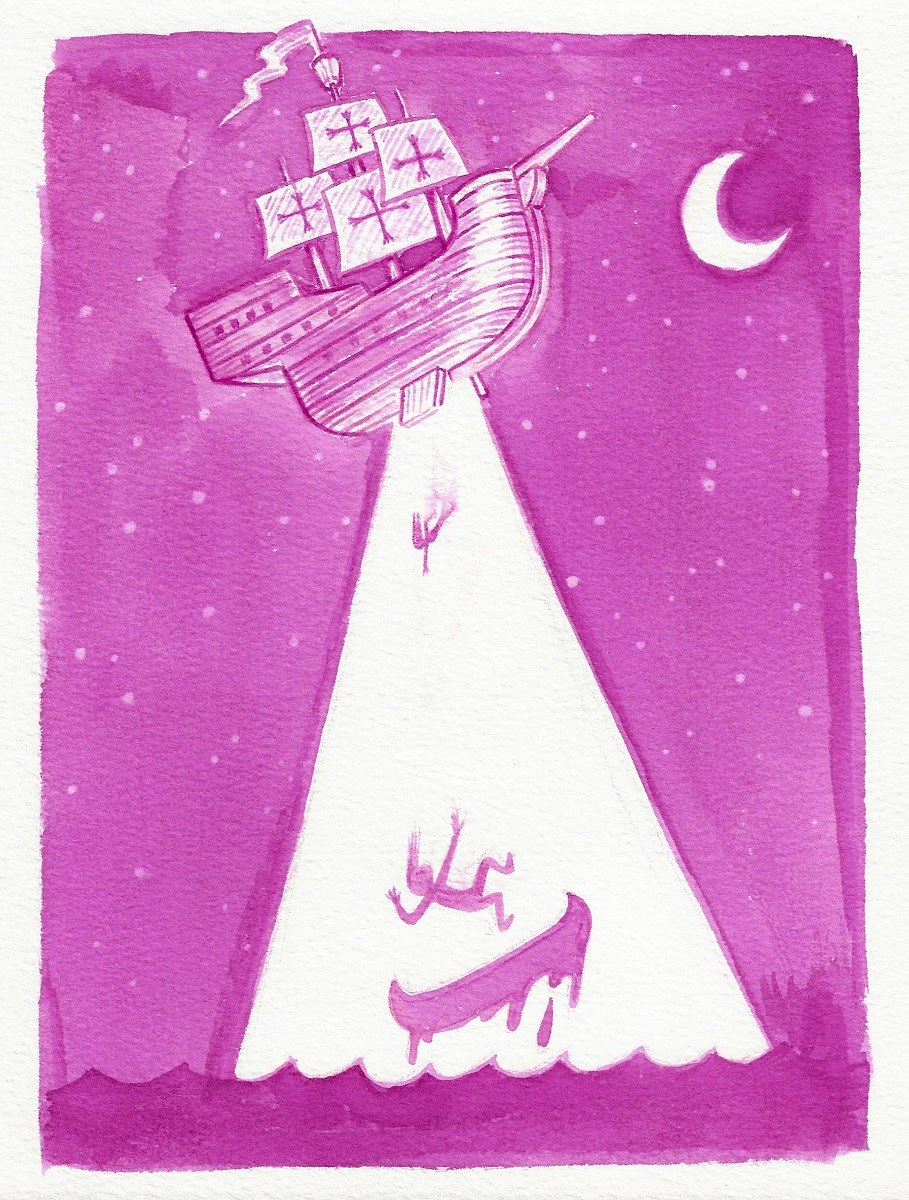 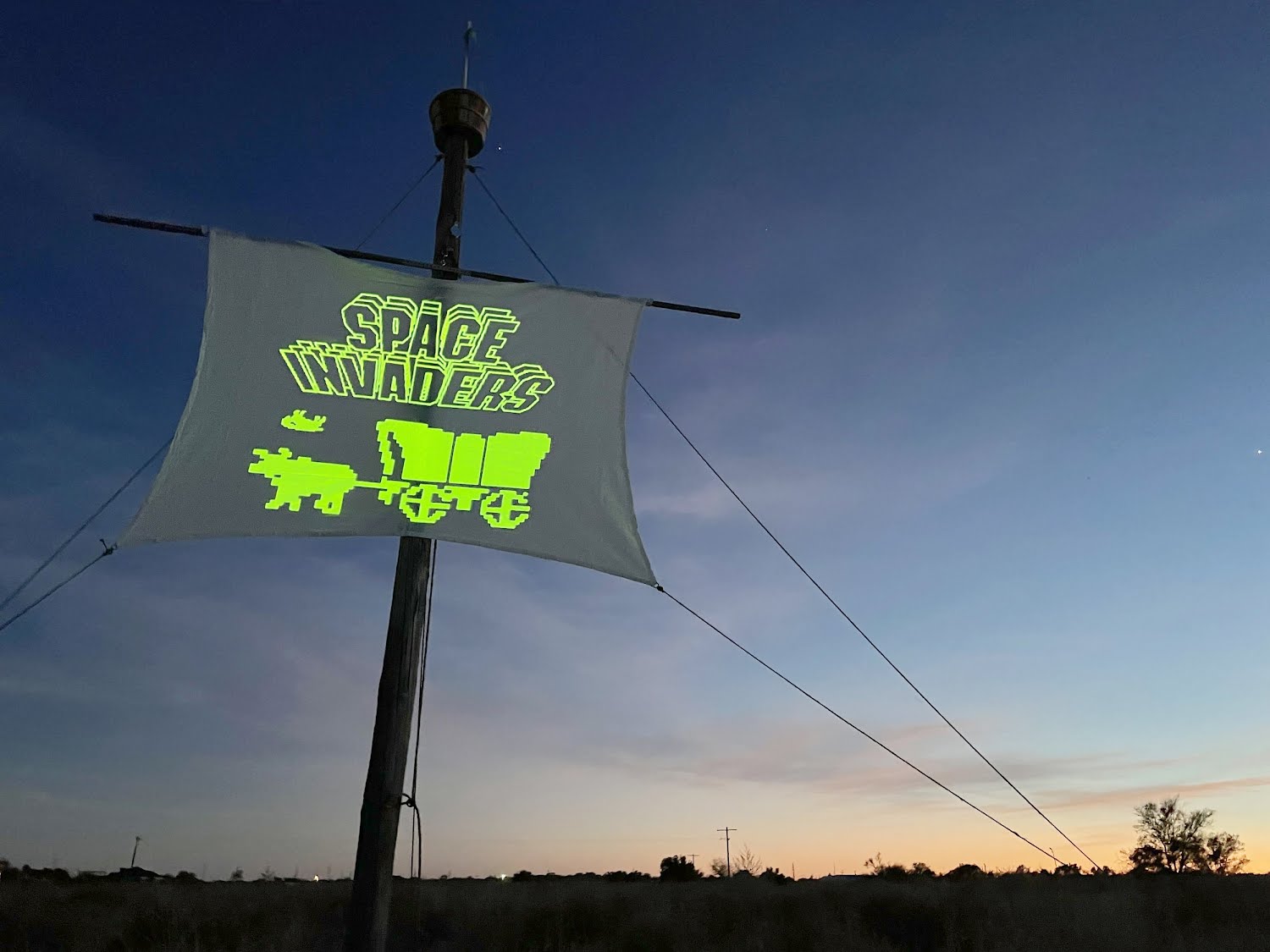 So although Roswell’s UFO Museum does not contain any actual, legit alien artifacts, another nearby institution, the Roswell Museum, is chock full of them, as García pointed out in his residency exhibition. Keeping with the early ‘80s video game motif of neon green on black, García printed up an illustrated guide to the Museum’s collection of Spanish and settler weaponry and armor, reframing the European conquest of the Americas as a proper science fiction invasion. They say that history is written by the victors, but they always try to do a lot of erasing, too. The past is always there, however, ready to be reclaimed by anyone who makes the effort to remember.

“Right now there’s a huge attempt to push against history,” García says, referencing the recent controversy around Critical Race Theory in schools. “When I listen to the right wing talk on the Roswell radio station, that’s one of the big things people are scared of: Oh no, they’re going to teach our kids history!” García can’t help but laugh at the absurdity of it all; these people are almost putting satirists out of a job.

Still, he recognizes that his audiences won’t always agree with him right off the bat, especially in a tourist town like Roswell. “One of the strategies I was trying to use was the sci-fi alien to lure you in, and then once you’re in the exhibition, you would start realizing, oh, you are the alien yourself.

“I’m including myself in this because I’m a Chicano. I’m of mixed race, of Spanish conquistadors and the indigenous people they conquered. So it’s not an attack on white peoples, per se. The whole idea of colonization, of understanding that you are part of the alien invasion was one of my hopes that some of the viewers would come into the space and have an ah-ha moment. Especially now, when a lot of undocumented people are speaking indigenous languages who are coming across the border, and we consider them ‘aliens.’ I think it’s the hugest hypocrisy. I mean, these people are from here! How can people of European descent call indigenous people an alien; I just can’t understand that.”

Another trait common to all cartoonists is that they can’t stand to sit still, despite their job demanding they do just that – there is always another drawing to be done, another joke to be made, another outrage to be skewered. And for García, another skill to be developed. During his residency, he began making his own ink, a beautiful pink-purple pigment he derives from the fruit of the prickly pear cactus. “Since I am using an Indigenous perspective that looks out at the alien colonizers,” he writes in Hyperallergic, “I thought I should create my drawings by using something native to the area.”

He is still experimenting with different oils and binders to try to make the ink more stable, as the natural pigment is not lightfast. They are soft, tonally nuanced drawings, funny and warm and otherworldly all at once. In time, though, with enough sunlight, the drawings will fade. But for a satirist looking around at this country and this culture, inspiration is never in short supply. Whether in black or in purple or on walls or on sails, day after day in the United States of America, there will always be more cartoons to come. ◼︎ 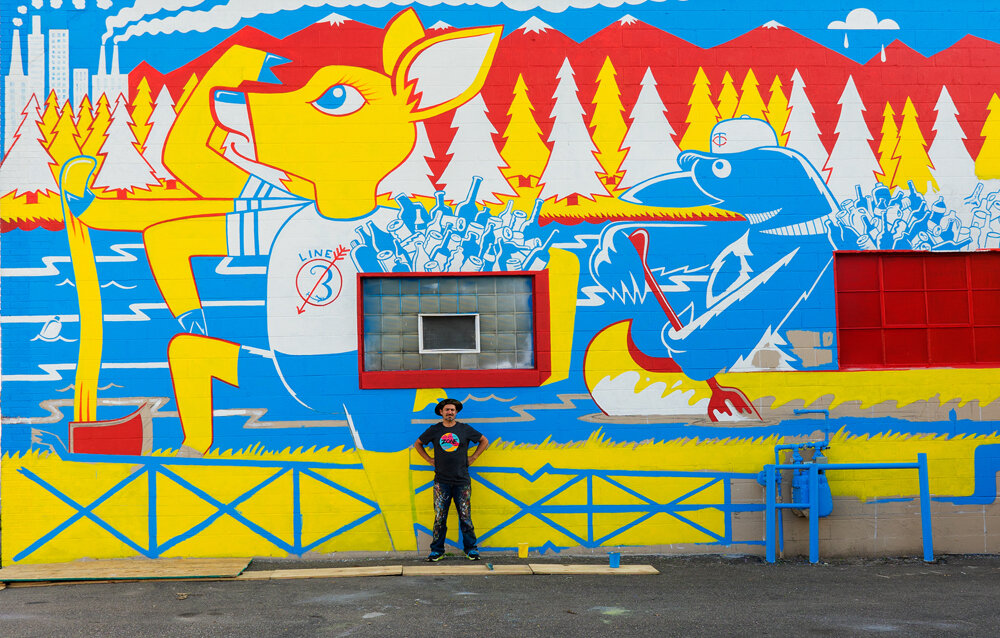 All images are courtesy of the artist.