Changing the Narrative: Shanai Matteson and her art go on trial

Matteson is an artist, writer, and activist whose Overburden/Overlook project seeks to challenge the narrative promoted by extractive industries (notably mining and oil transport) in northern Minnesota.

The project will culminate with a guided tour of landmarks near her home in Aitkin County – sites where both environmental exploitation and Indigenous-led activism are ongoing. The tour was scheduled for July 8th but has been postponed because of Covid. A week later – on July 15th – Matteson is planning to station her Overlook sculpture outside the Aitkin County Courthouse where she is facing criminal charges related to protesting the new Line 3 oil pipeline. 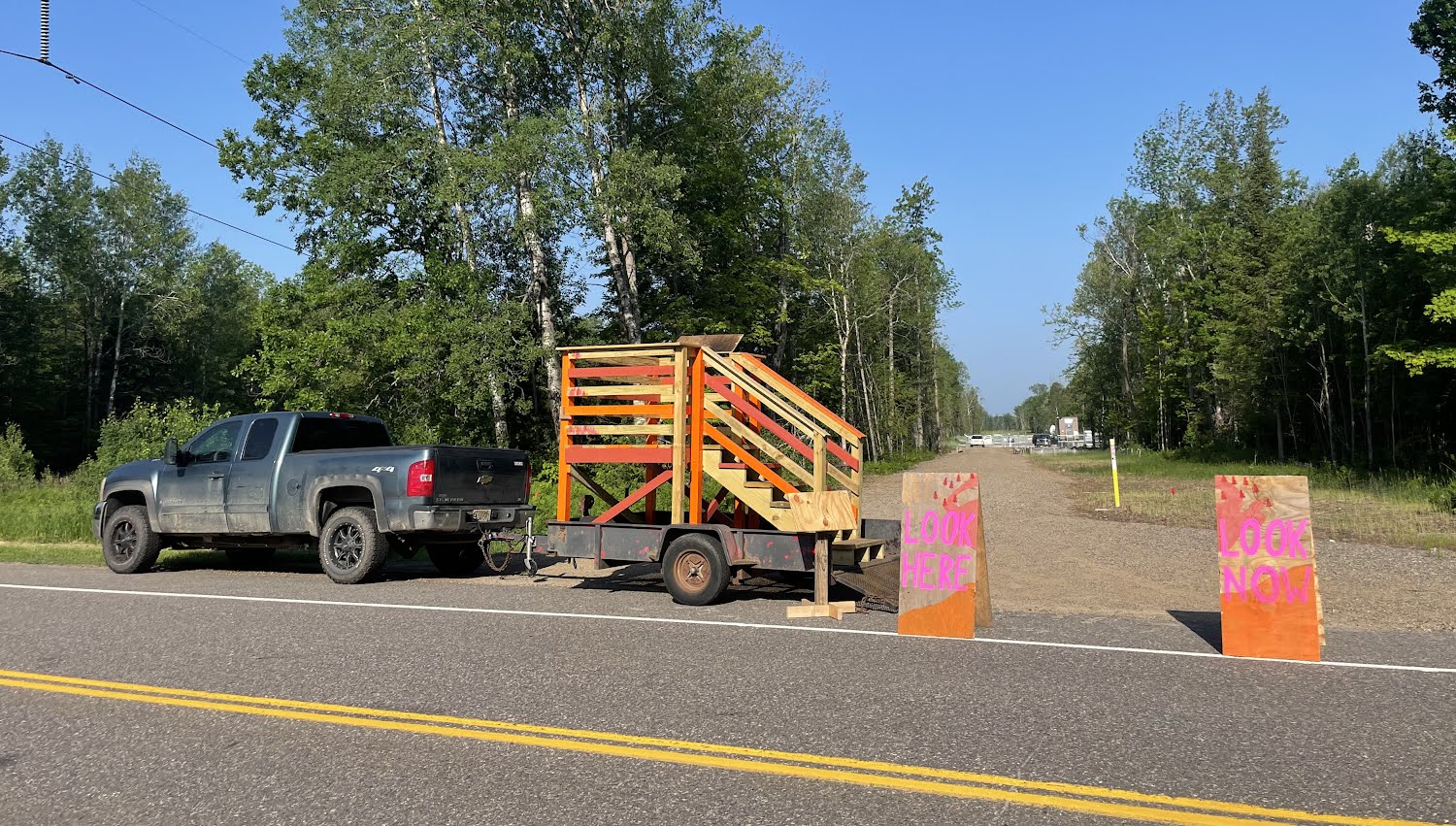 An evolving narrative around mining

The world looked different four years ago when Matteson started Overburden/Overlook. It was before the COVID-19 pandemic and before the Canadian oil company Enbridge completed work on a new Line 3 pipeline to transport tar sands oil from Canada to Lake Superior.

Matteson began her Overburden/Overlook project in partnership with Dr. Roopali Phadke, a professor of environmental policy and politics at Macalester College. Phadke was looking at how a different industry in northern Minnesota – mining – was crafting a new public relations campaign.

“Mining companies across the world were using a new narrative to push projects, in an effort to open new mines in the United States,” says Matteson. “They started to talk about the need for critical minerals to fight the climate crisis.”

Phadke became interested in this story because of the proposed Twin Metals mine near Ely and the proposed PolyMet mine near Hoyt Lakes. (Since then, another proposal for a new nickel sulfide mine has been submitted in Matteson’s home of Aitkin County.)

Matteson accompanied Phadke on her research trips to northern Minnesota, where she immediately latched onto the number of physical overlooks built to showcase open pit mines.

“These platforms were supported by mining companies and then by the tourism industry, and there’s usually a plaque showcasing how much material was mined there,” Matteson explains. “But they never talk about the devastation it caused for the land or how it impacted women, Native communities or the workers.” 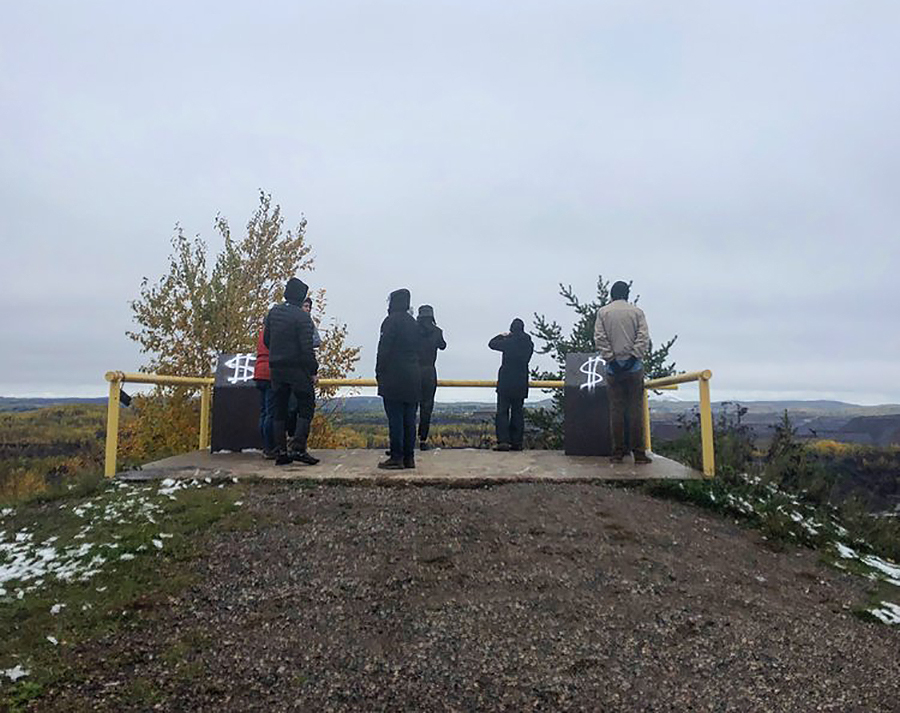 An overlook at a mine on Minnesota's Iron Range. Image courtesy of the artist.

A "way of life" based in extraction

Matteson talks often about how extractive industries shape people’s relationships to each other and to the land, viewing them as transactional or even owed as opposed to symbiotic by nature. Among the many concerns protesters raised over the new Line 3 was the link between extractive industries and sexual abuse and sex trafficking.

But the narrative that Matteson says she and others hear often in northern Minnesota is that “mining is our way of life.”

“A lot of people are living inside this really narrow story,” says Matteson. “It’s a story that leaves out a lot of people, a lot of voices, a lot of experiences, and that’s dangerous. It allows for rampant extraction, abuse, and division that makes it easier for these multinational corporations to take advantage of land, labor, and communities. People are living inside a story where that’s our way of life and that’s acceptable.”

Phadke and Matteson met with groups of policy makers, union workers, pro-mining and anti-mining community groups, and residents of northern Minnesota to interview them on their experiences with the mining industry.

Through these interviews, the idea for her sculpture was born – Matteson reconstructed one of the overlook platforms and placed it on the back of a trailer, able to move around and spotlight things other than those highlighted by the mining industry.

Matteson hoped to take the concept of an overlook and turn it away from the extraction itself, “to create a space where we could tell those overlooked stories.”

Matteson's Overburden/Overlook project has taken many forms, including community engagement through felting workshops and exhibitions of her work in textiles and printmaking. Images courtesy of the artist.

"Even though people know the dangers, they’re afraid to speak up"

During interviews, Matteson noticed that women were more likely to have concerns but would most often only voice them without men in the room. White women, Matteson noticed, were often afraid to speak up in their communities.

“There was a sense that, even though people know the dangers, they’re afraid to speak up because somebody’s brother, father, or cousin works for the mining industry,” says Matteson. “If you speak up, you’ll be ostracized for standing up against the dominant cultural norm.”

One group said that, at the end of the day, they knew Indigenous activists would come.

“They were going to rely on Native people and their allies because to them, the cost was perceived to be too high,” says Matteson. “It’s not okay for us to rely on the people who have been most harmed and overburdened to do this difficult work.”

As Matteson was preparing to create her overlook, another Indigenous-led environmental struggle in northern Minnesota was thrust into the spotlight as the Stop Line 3 movement amplified to protest construction of a new tar sands oil pipeline – and the abandonment of the aging, existing Line 3 in the process.

In 2020, Matteson moved back from Minneapolis to her hometown in Aitkin County and became involved with the Water Protector Welcome Center and the on-the-ground movement to protest Line 3. Construction on the new Line 3 finished last fall, and Matteson returned to Overburden/Overlook, with the added goal of helping spotlight some of the important sites and work that was done as part of the Stop Line 3 movement, led in large part by Indigenous women. 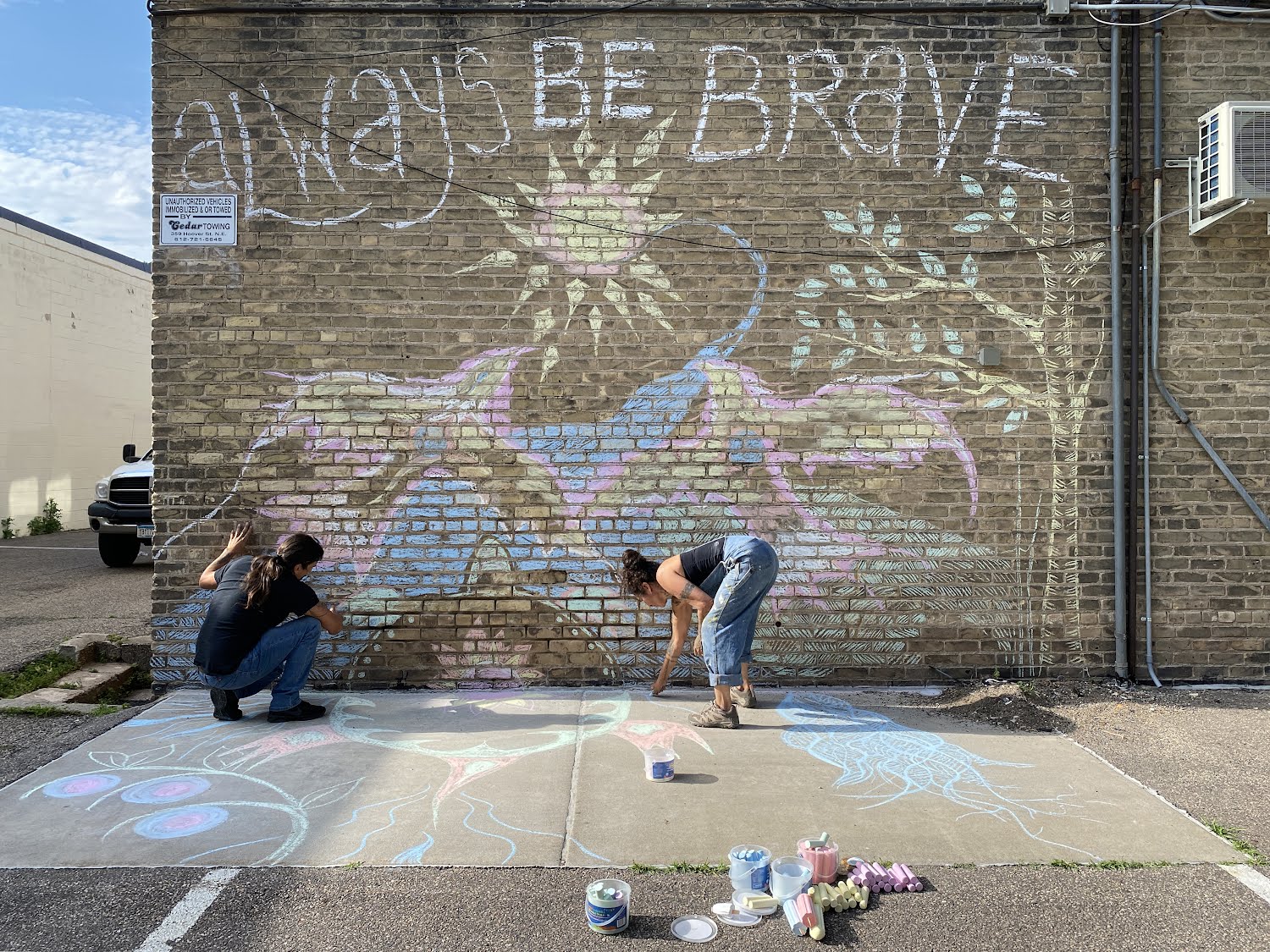 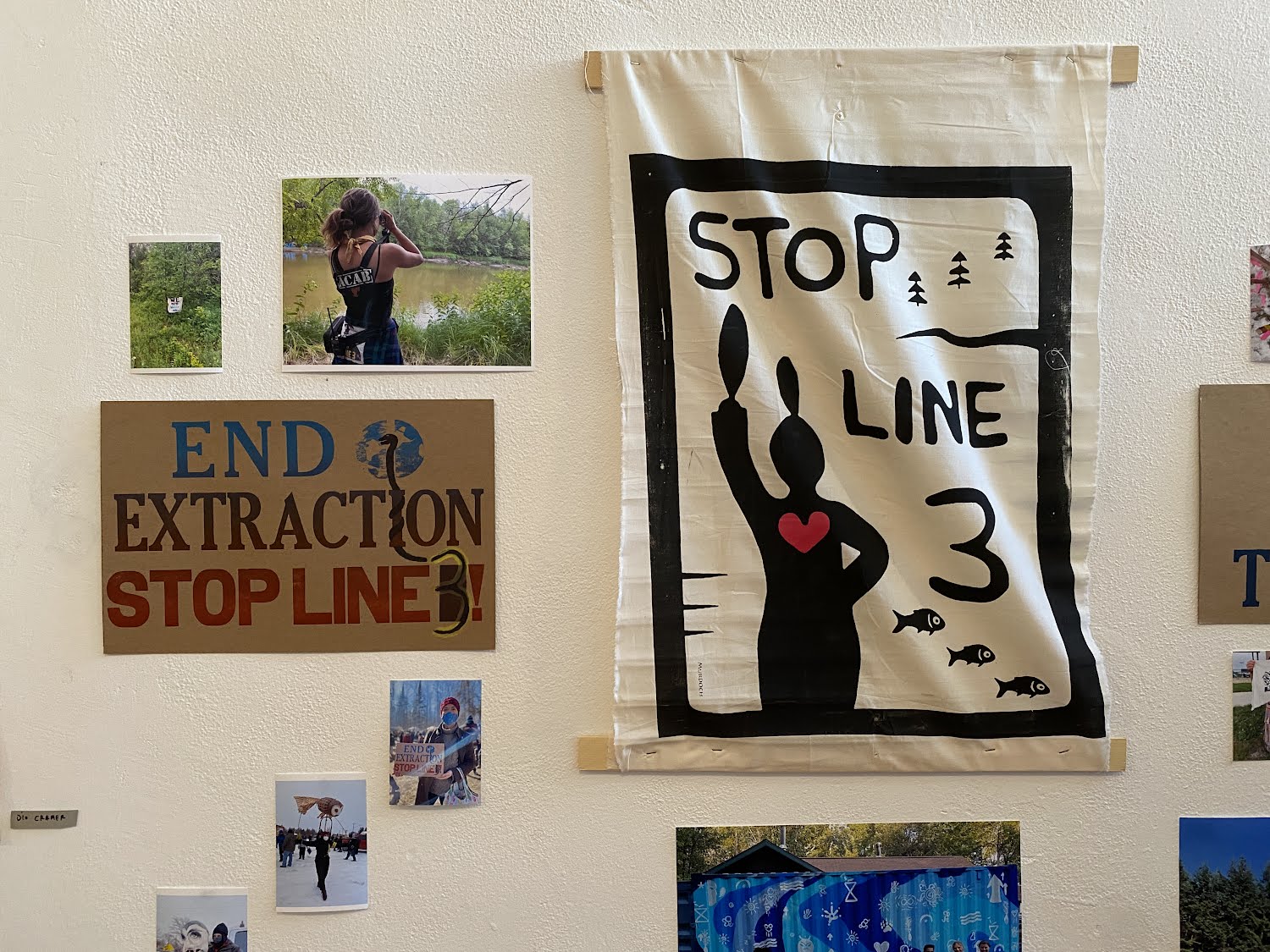 At the end of June, Matteson and Anishinaabe artist Annie Humphrey (pictured at top, right, working on a mural) organized a one-night exhibition at Pink Slip in Minneapolis featuring artwork, performance, and documentation of the actions against Line 3. Photos by Russ White.

"I hope they see we’re not intimidated"

The planned tour will focus on these important stories and sites, with those who led the Stop Line 3 movement sharing their experiences as the caravan of speakers and participants moves around Aitkin County.

Matteson’s criminal trial runs July 13 - 15 at the Aitkin County Courthouse, and on the last day, she plans to station her overlook outside with photos from the last couple years again highlighting resistance to the Line 3 pipeline.

“There are also a couple people who volunteered to give tours on that day; they’ll share their own stories and showcase the photos that will be highlighted on the overlook,” says Matteson. “It will be a presence outside the courthouse.”

Matteson hopes her work will draw attention to the important work being done in and around her home county. She used the “high visibility” neon orange often associated with hunting gear to deck the outside of her overlook. This has another meaning, says Matteson, given that her charges came out of being surveilled by the government.

“I hope they see we’re not intimidated,” she says. “We’re going to continue to love water, love each other, and tell these stories. It encourages other people to see that they have power, that we have power to change our realities.”

The trial is open to the public, and there is also a planned public support rally at the courthouse in conjunction with Flood the Courts and the Drop the Charges movement. ◼︎ 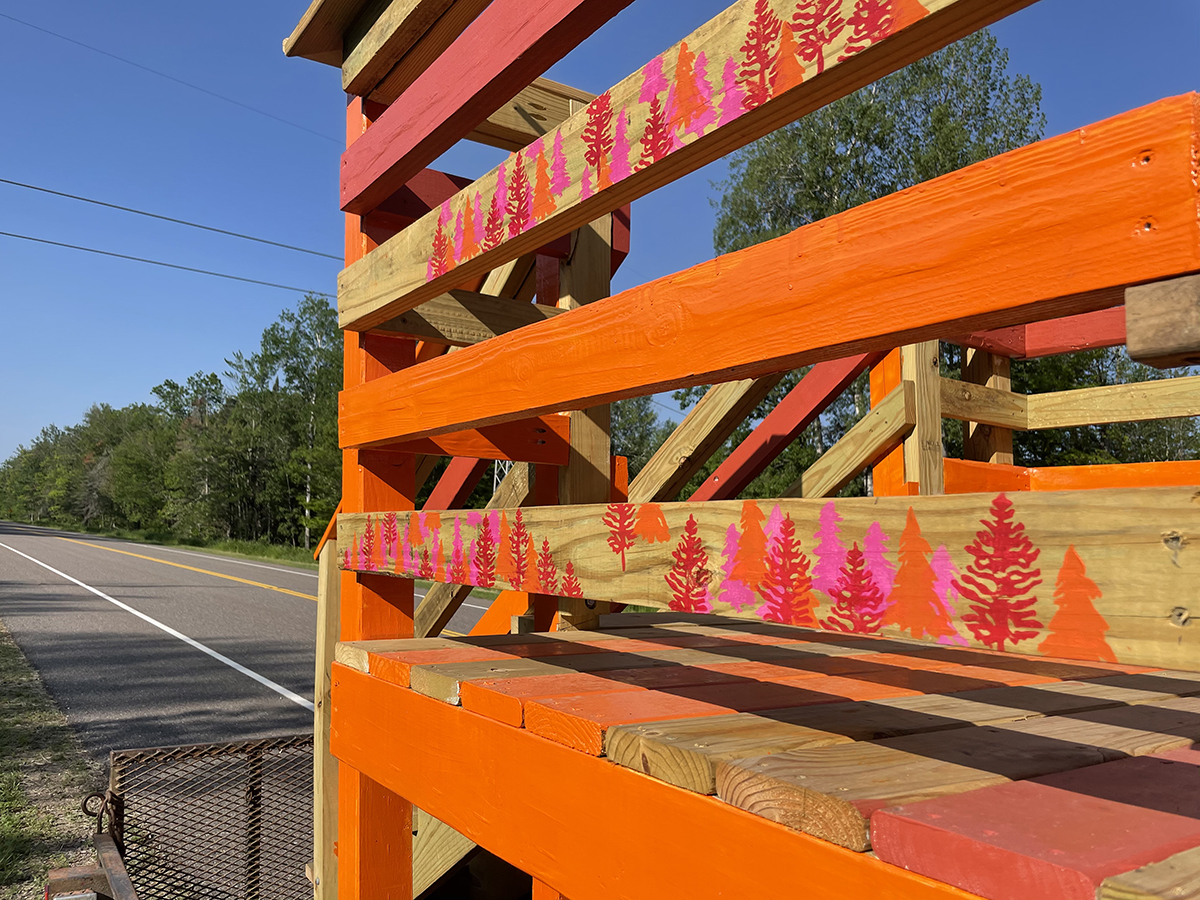 To see more of the artist's work, visit shanai.work or follow her on Instagram @shanai_matteson. You can also read more about the project in this profile of Matteson written in 2020 by Russ White.