Ahead of their upcoming Discussion Series, each of the six 2019 McKnight Fellows in Visual Arts talks to us individually about their practice

Article made possible thanks to the McKnight Artist Fellowship Program

This is the first in a series of articles profiling the six distinguished artists chosen as 2019 McKnight Fellows in Visual Arts, a grant program for mid-career artists in Minnesota that is administered by the Minneapolis College of Art and Design. Culminating the two-year fellowship (delayed last year by the pandemic), there will be two McKnight Discussions, each held in person:

The first is on May 24th at 6:30pm at MCAD, featuring Janet Dees, Steven and Lisa Munster Tananbaum Curator of Modern and Contemporary Art at The Block Museum of Art, Northwestern University, in conversation with Leslie Barlow, Mary Griep, and Melvin R. Smith.

The second, featuring Henriette Huldisch, Chief Curator and Director of Curatorial Affairs at the Walker Art Center, in conversation with Joe Sinness, Alexa Horochowski, and Tetsuya Yamada has unfortunately been postponed until the fall, due to Covid-related scheduling issues.

Let’s face it: portraits are really just an elaborate excuse to stare. We’re all taught from an early age that looking too long is impolite, but in truth there can be some generosity in it, as well. For the sitter, a portrait can be a chance to feel seen; for the viewer, a chance to see themselves in someone else. For Joe Sinness, whose meticulously rendered colored pencil drawings are sumptuous and symbolic, portraiture is both a personal indulgence and a way to give back. You can tell he’s having a good time, but this generosity comes with great gravity, as a matter of life and death.

“I’m trying to find a way to make queer bodies look beautiful,” he says, “but also defensive, without looking like we’re villains. Because we’re being treated like villains constantly.”

It’s no understatement. Right now, the bigots and charlatans of the American right are waging another disingenuous culture war, as always aimed at the most marginalized among us. In the first quarter of 2022, according to NBC News, there have been nearly 240 pieces of anti-LGBTQ+ legislation introduced in state legislatures across the country, most of them targeting trans people, many specifically targeting children. And that’s only the first three months — a gut-wrenching increase over the 191 such bills proposed in the entirety of 2021. Add to that, if you can imagine, the indignity of having your very existence debated incessantly by pundits, trolls, and allies alike.

When we met for a studio visit at his home in east Saint Paul, Sinness had just gotten back the night before from a trip to Texas for a corporate illustration gig, his suitcase still standing near the back door, not yet unpacked. It was a journey deep into Red America, where “Let’s go, Brandon” is common shorthand for a whole spectrum of aggro unpleasantness. Sinness found it unnerving and spent the plane ride home, he tells me, reading James Baldwin’s The Fire Next Time. “I am amped the fuck up,” he says with a laugh.

This is an artist who has never been shy. Five years ago, at his MAEP show the Flowers, Sinness brought leather bar culture to the Minneapolis Institute of Art, elevating aspects of kink and cruising to museum-quality standards in immaculately detailed colored pencil drawings. One in particular stands out in my memory: Chris, a 31 x 22” portrait from the knees up of a burly, muscular man wearing only a black leather jock strap, a studded chest harness, and a leather puppy mask. He is staring straight back at us, fully realized in exquisite detail, no hair or blemish left unobserved. His skin shimmers with layers of yellows, pinks, and purples; the bumps on his nipple, the stitching on his harness — all of it in sharp focus for our consideration. It is a remarkable, unassailable piece of drawing. It also gives no fucks, and Chris meets our gaze and stares right back, as if daring us to clutch at our pearls. Behind him, a giant puffy cloud fades from pink to white against a dark blue sky, framing this S&M enthusiast in a transcendent, saintly aura. Out of the dungeon and into the shining sunlight. 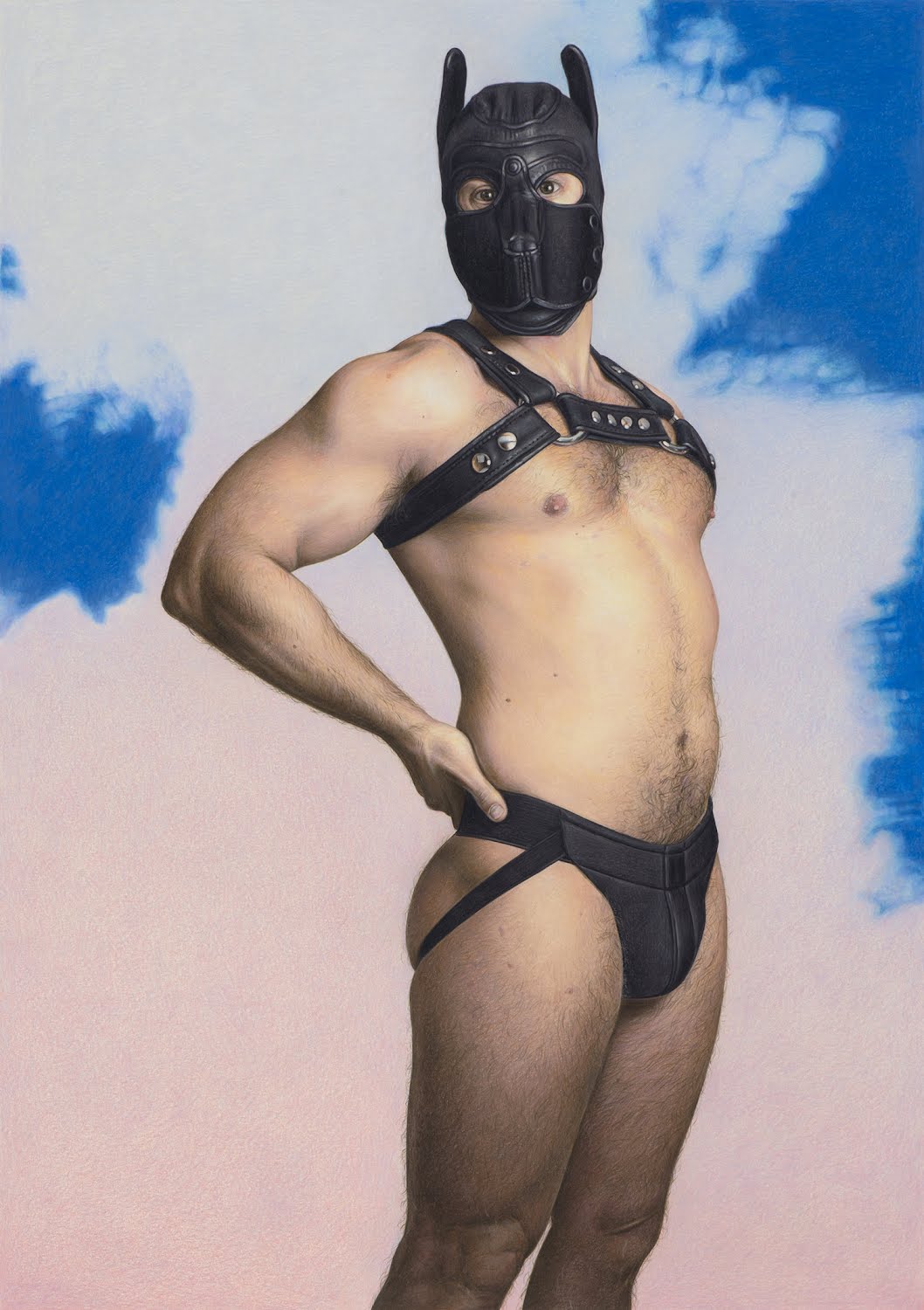 Heavenly clouds have been a recurring motif in Sinness’s drawings, although he grimaces at such religious terminology. “I’m trying to divorce myself from the Catholic language I grew up with,” he says with another laugh. In reality, the clouds were inspired by the album art for Dolly Parton’s 1978 country-disco record Heartbreaker (which honestly still feels a little religious, because Dolly Parton is a saint). Either way, fundamentally Chris is about the elevation and exaltation of kink, both through the backdrop but even more so through the medium.

The level of technical skill on display is a seduction in itself: at first you can’t believe it’s not a photograph, then that it’s not a painting. “Colored pencils,” you gasp, with indignant surprise. You get closer and marvel at the control, the artistry, the amount of time it must have taken. “I really like working with high realism,” Sinness says. “It gets people’s attention, and it makes them pay attention longer.”

Of course, in the case of the Flowers, what we are paying attention to are men screwing in the woods, or laying ass-up on a bed, or posing in leather dog masks; not exactly your standard museum fare. They are provocative but tender, ethereal but grounded. These are real people, enjoying real moments, although an element of film-grain fantasy lingers in some of the pieces as well — a bit of throw-back nostalgia to the necessarily more furtive, coded days of American queer culture.

The walls of Sinness’s home studio are peppered with these inspirations: screenshots from old Hollywood films and fuzzy ‘80s TV shows, clippings of glistening buttocks and bodybuilders from ‘70s pin-up mags, and the artist’s own photos and sketches from live models, each affixed into these seemingly random mood boards with torn bits of blue painter’s tape. In addition to the hyper-real portraits, Sinness also has a years-long interest in still life, masterfully orchestrating disparate elements together in colored pencil drawings that read as tromp l’oeil collages. Even the blue painter’s tape gets recreated, indistinguishable in one drawing on display from the two actual pieces of tape holding it to the wall. 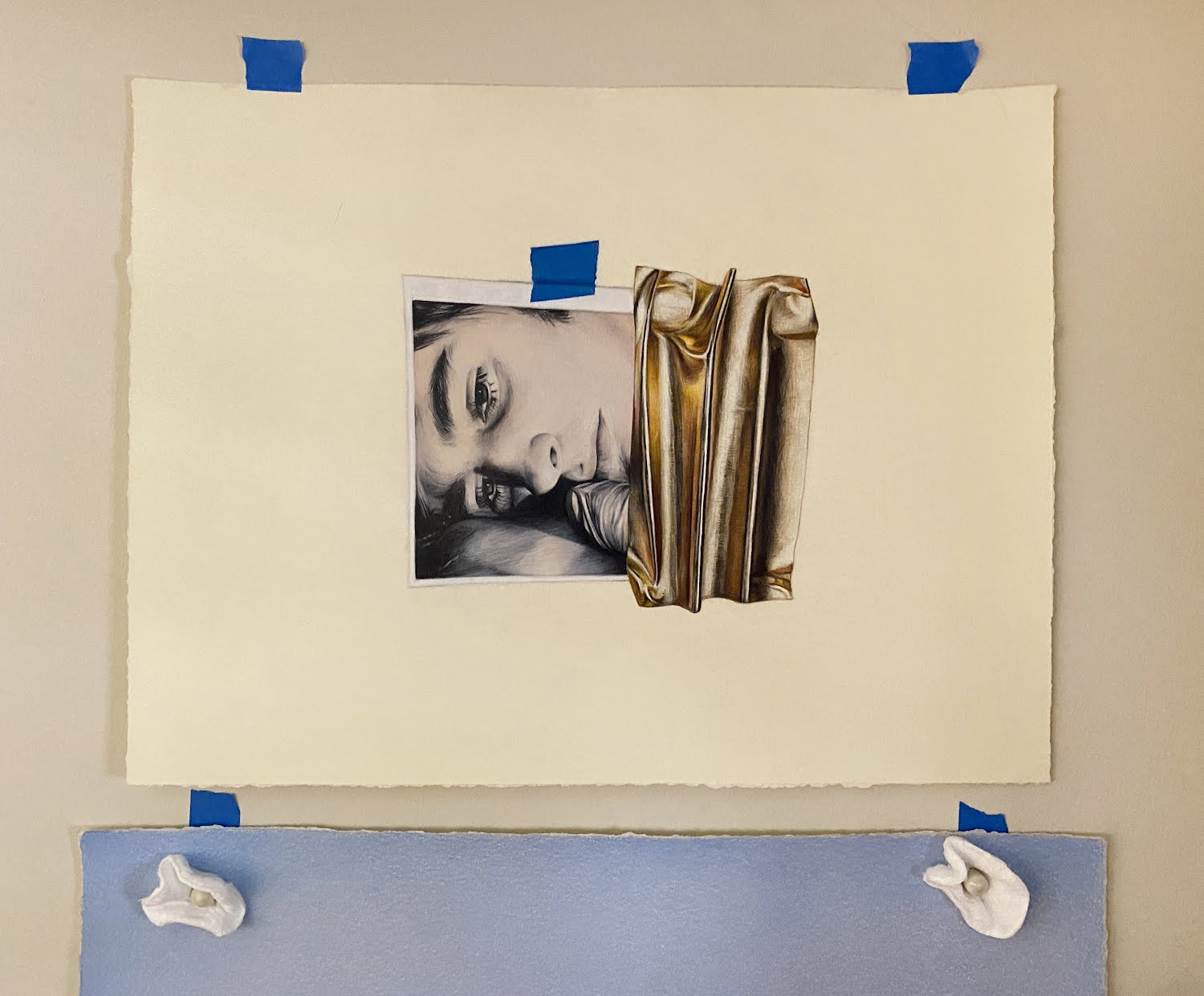 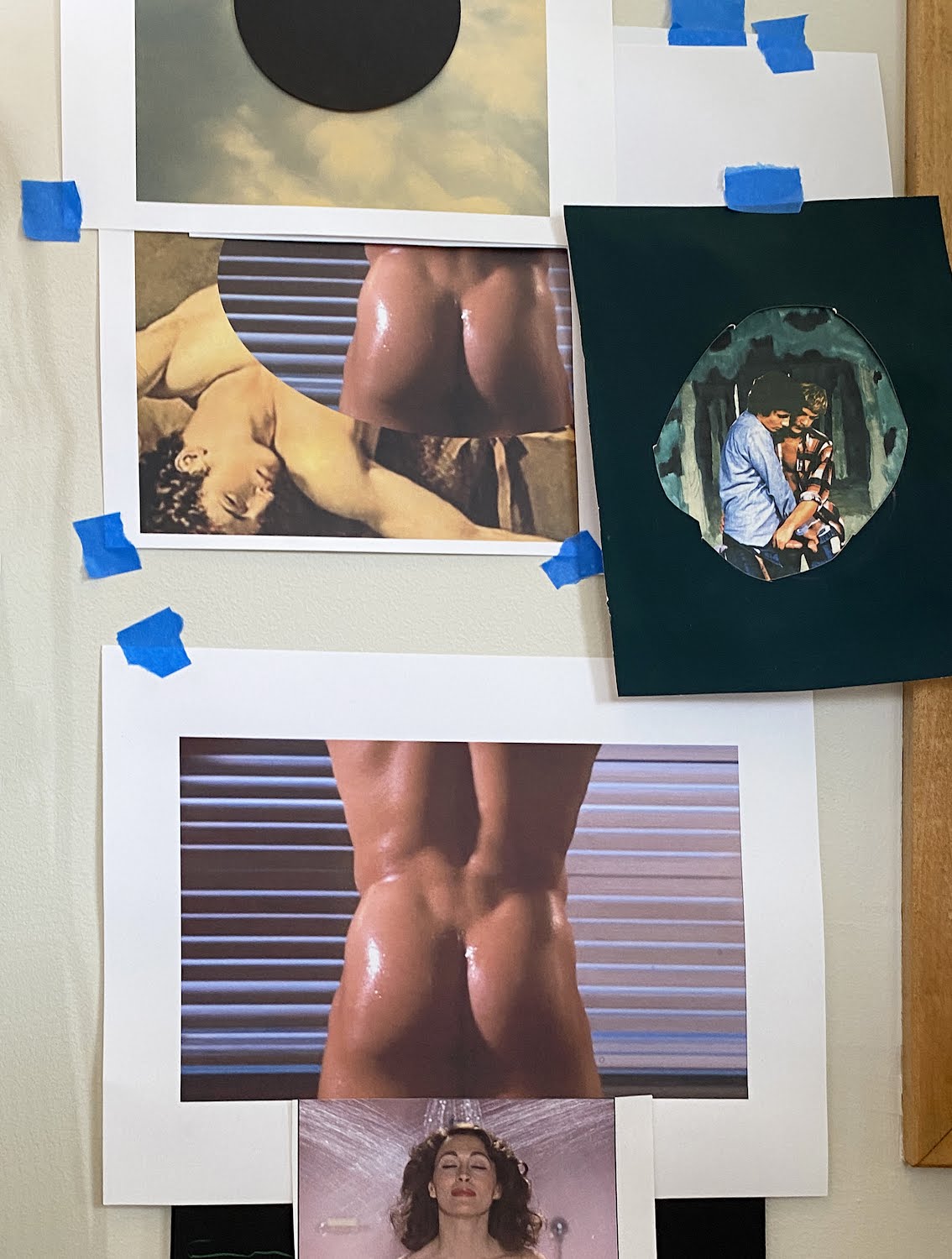 Top: Dawn, colored pencil on paper (note: one piece of blue tape is not like the others). Bottom: Photo references taped to the artist's studio wall.

“I really liked how still life spaces could become a stage for queer performance,” he explains. “I take images of people, flowers, and objects, and they interact in a way that is a little bit of an unexpected performance.” He has described this work as a queering of time and space — connecting the old and the new, creating new contexts even as he leaves so much of the cream paper empty. I wonder if this work isn’t also queering realism in some way: taking that most traditional benchmark of artistic mastery for a ride, creating generative realities out of rigid academic observation. There is an elegant magic to these compositions, conjuring monuments to desire out of houseplants, gemstones, and polaroids — or drawings of them, at least.

Realism itself is a fiction, as Magritte pointed out with his pipe. But it’s not easy. When I ask Sinness what the point of all this belabored rendering is for him, he gives it to me straight: “Part of the gay experience for me was being great at everything to avoid the flaw of being queer.” He takes a beat and adds, “I have a good therapist.”

During the pandemic, he has been slowly working on a new series of portraits, allowing himself the space and the time to lavish each one with as much attention as it deserves. These fellows come across as less saintly, a bit more mischievous, and more directly relatable than the subjects of his previous work. “I just want things to be a little bit grittier, a little bit more aggressive,” Sinness says of these drawings. 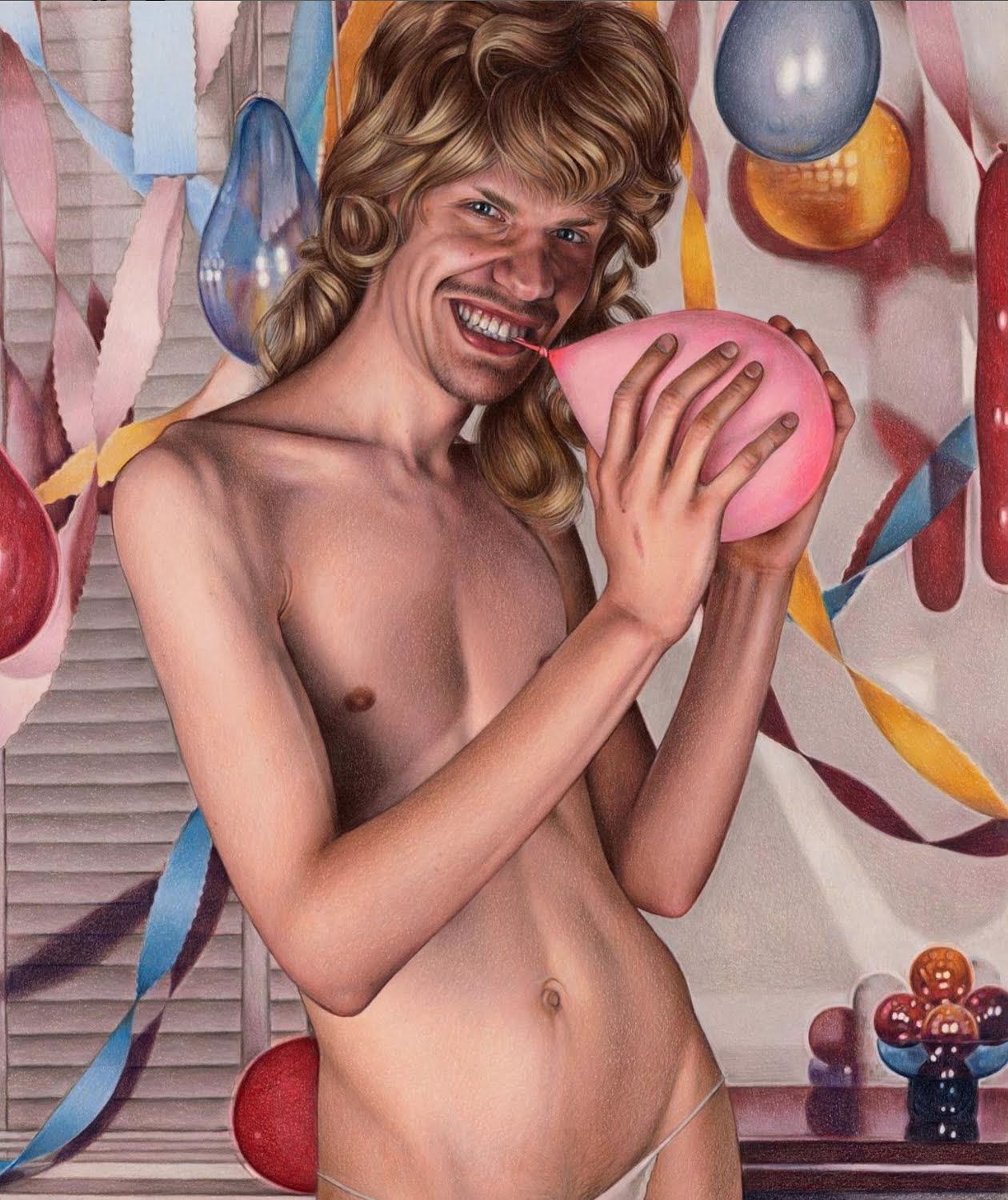 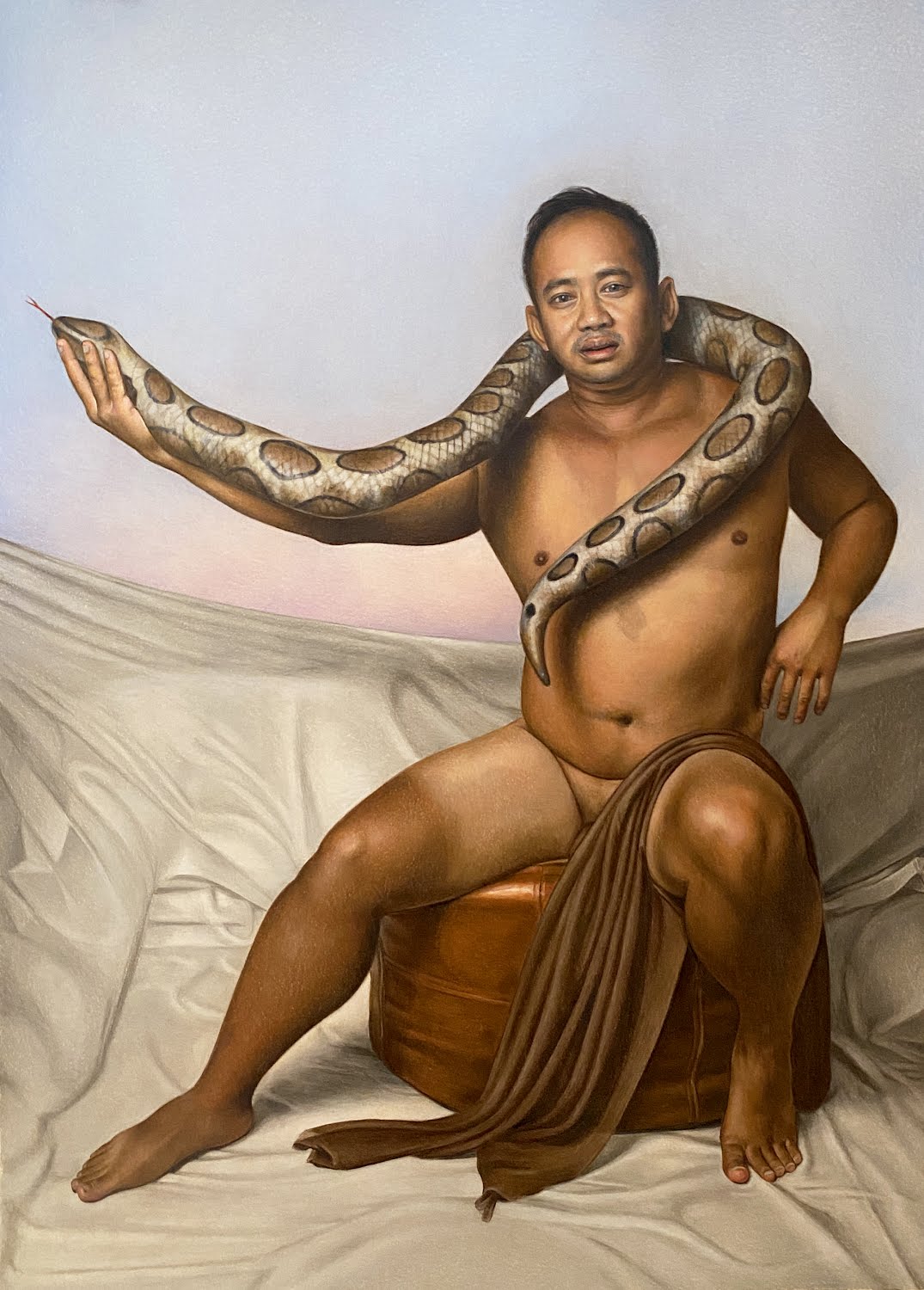 They are stunning to look at — hyper-real in saturated colors that fill each page to its deckled edges — fully realized scenes of individuals serving a kitschy, knowing bit of cheesecake. There is a homemade-ness to the backdrops that says, This fantasy can happen anywhere; you can create it in your bedroom, in your basement, with anybody, and with any kind of body. The drawings are sweet but not saccharine, certainly funny, and borderline camp — as with Untitled, in which a man poses nude with a big fake snake draped across his bare shoulders and a silky bit of fabric barely keeping him modest. But as John Waters explained, “If you’re in on it, it can’t be camp.” An homage, then, to the playful joys of questionable taste.

It’s all part of a creative lineage that Sinness is tapping into and carrying on, a list of names that adds up throughout our conversation: James Baldwin, Edwin B. Willis, Maria Callas, Dolly Parton, Al Parker. Interestingly, you'll notice a complete lack of self-portraits here. Some drawings look back to those who came before; others look squarely at those who are here now. All of them, though, are about looking both to the community and to the future. “I was born in 1980 and didn’t grow up with any queer elders,” he says, “and also a lot of my queer elders died. So now I’m thinking, how do I be the queer elder that I never had?”

There’s a beautiful world somewhere out there, maybe in the past and hopefully in the future, when the sun shines down through the clouds onto a man at the beach being given his flowers. It is simple and tender, with not a fascist in sight, and Joe Sinness invites us to really look, if you like, and take all the time you need. ◼︎ 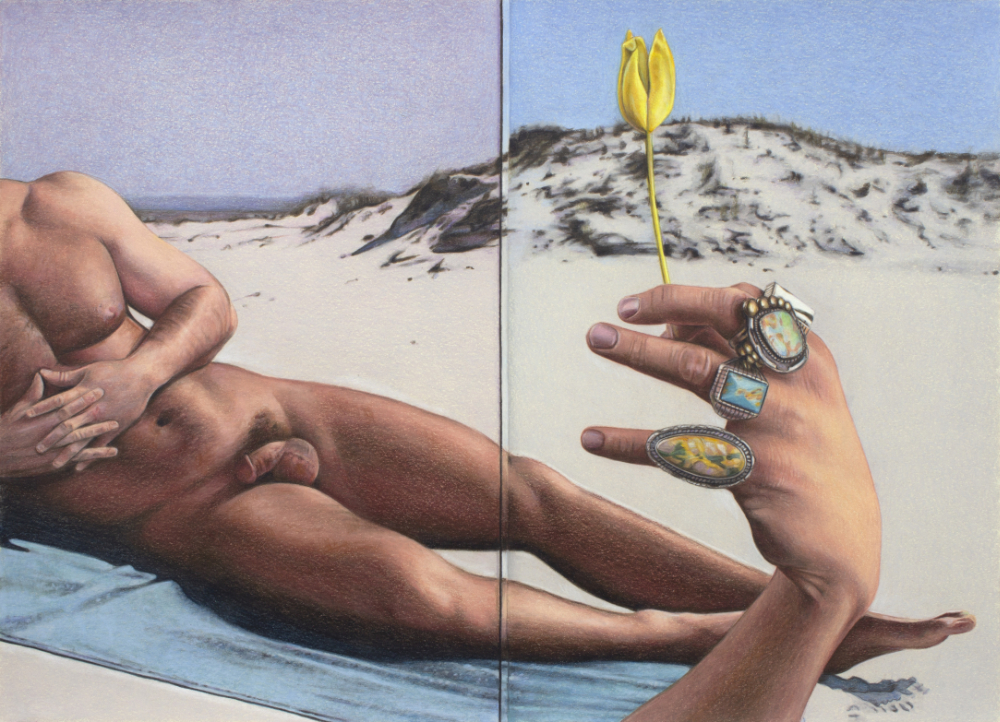