A participant in the 2021 Sketchbook Project and upcoming Gamut Gallery exhibition, Gibney lets us in to her wild world of everyday characters

We at MPLSART are excited to unveil the results of the 2021 Sketchbook Project! There is still time to preorder your copy of the limited edition book via our Kickstarter — your only chance to get your hands on the collected work of 70 Twin Cities artists who contributed to last year's traveling sketchbooks.

In addition to the limited edition book, the original sketchbooks will be auctioned in April, and there will also be a group exhibition at Gamut Gallery opening March 18th, featuring new work from many of this year's contributors — including this week's profiled artist: Mary Gibney!

"I like visual clutter," Mary Gibney once said in an interview. It shows. There's a delightfully overwhelming density to her work — not only within each composition but within the entire range of her paintings, drawings, collages, sculptures, and installations. They range in size from giant canvases to small scraps of paper, from thoughtful portraits to intense cartoons. Viewing her work all together is like standing still on a busy city sidewalk with people streaming past you on all sides. Bustling, bristling, full of lives you'll never know and faces you'll never see again.

We connected here to talk about the power of sketchbooks and strangers and just who all these faces belong to. 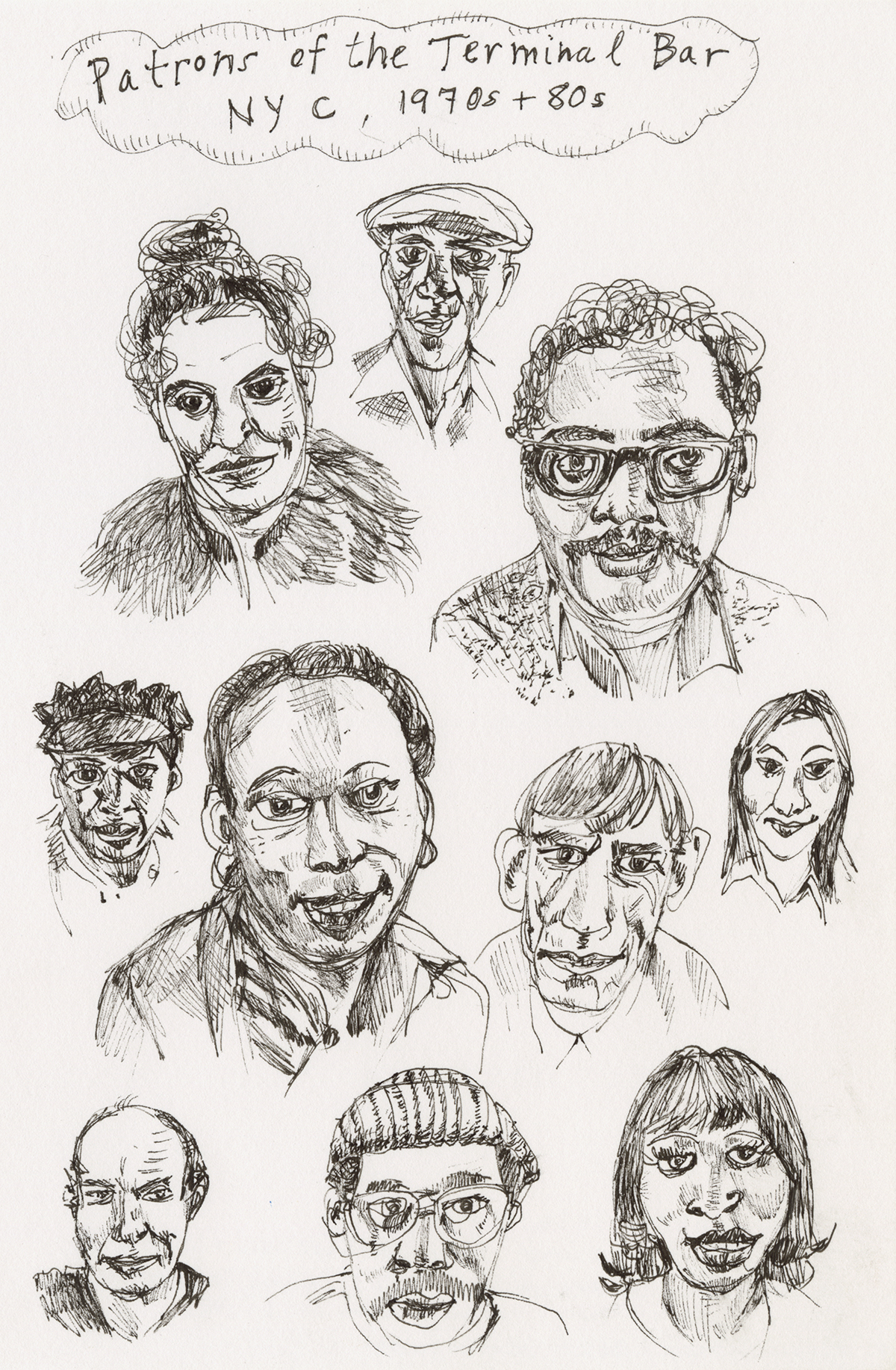 One of Gibney's contributions to the 2021 Sketchbook Project.

Russ White: You have a remarkable range in the works you show — in terms of size, detail, and tone — and you are amazingly prolific (every single piece in your recent Rosalux show was from 2021!) The work was so varied and also so honest, it almost felt like looking at sketchbook pages blown up onto a wall. Do you normally keep a sketchbook going, and if so, what kind of stuff do you fill it up with?

Mary Gibney: Sketchbooks are essential! I keep several going. I always carry a small one and have multiple others sitting around my studio. I use them for sketches and words, riffing on themes, future show ideas, anything that pops into mind. Sketchbooks are so necessary for me to explore every silly idea or urge without self-editing. I'm inspired by other artist's sketchbooks too and have been part of a sketchbook show that was so amazing — a glimpse into creative minds. Everyone does it differently. Mine are mostly drawn with my favorite Micron 02 pens, sometimes with added watercolor splashes. Occasionally I'll use a Japanese pen brush to really get loose. I have sketchbooks devoted to collage too, with the same idea of creating an image without judgement.

I have various sizes and styles, but mostly I use slim, cheap 5" x 7" paperback sketchbooks purchased in packs from Art Materials. Decent paper for sketching, but as far from precious as possible. Maybe you know this feeling — someone gives you a beautifully bound sketchbook that seems far too lovely to defile with half-baked ideas and scribbles. Paralyzed! I like to keep sketchbooks as a record of a moment, and often when I'm flipping through them I see ideas that I've forgotten about but may reconsider for my next show or art piece.

RW: What do you find more challenging — or perhaps more fun — working from source images to create realistic portraits of actual people or making up compelling characters out of thin air? Who are these fictional faces smoking cigarettes, crying giant tears, or appearing on the body of your boxing lady?

MG: I think the right word here is FUN. I veer from using photos for face inspiration to completely made-up oddballs. I greatly enjoy using a found image to create a portrait, to make an effort to capture whatever emotion I'm seeing in the photograph, and feeling that I'm somehow making a connection with my re-creation, as if that character actually exists. And then there are the characters who are pure emotion. The women with giant eyes crying huge tears, floating heads and filling bodies, watercolors of tiny characters climbing or perched on the heads of other creatures, harpies, cats. My fascination with body parts — detached heads, breasts, eyes, mouths. Lately I've been on a Harpie flow, producing multiple versions of this kind of beautiful, kind of scary woman-headed bird creature. Is she a protector or a threat? I'm not sure. 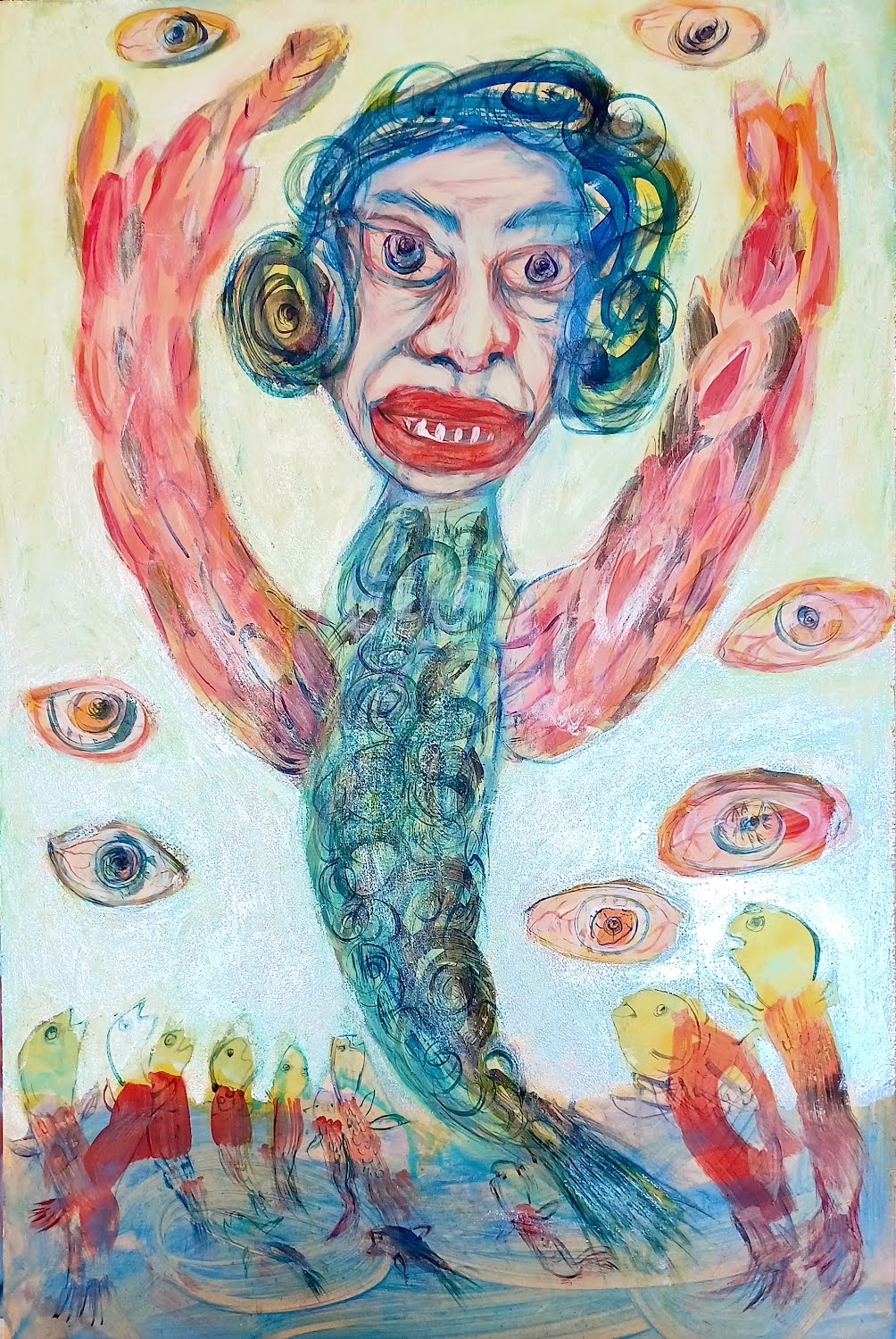 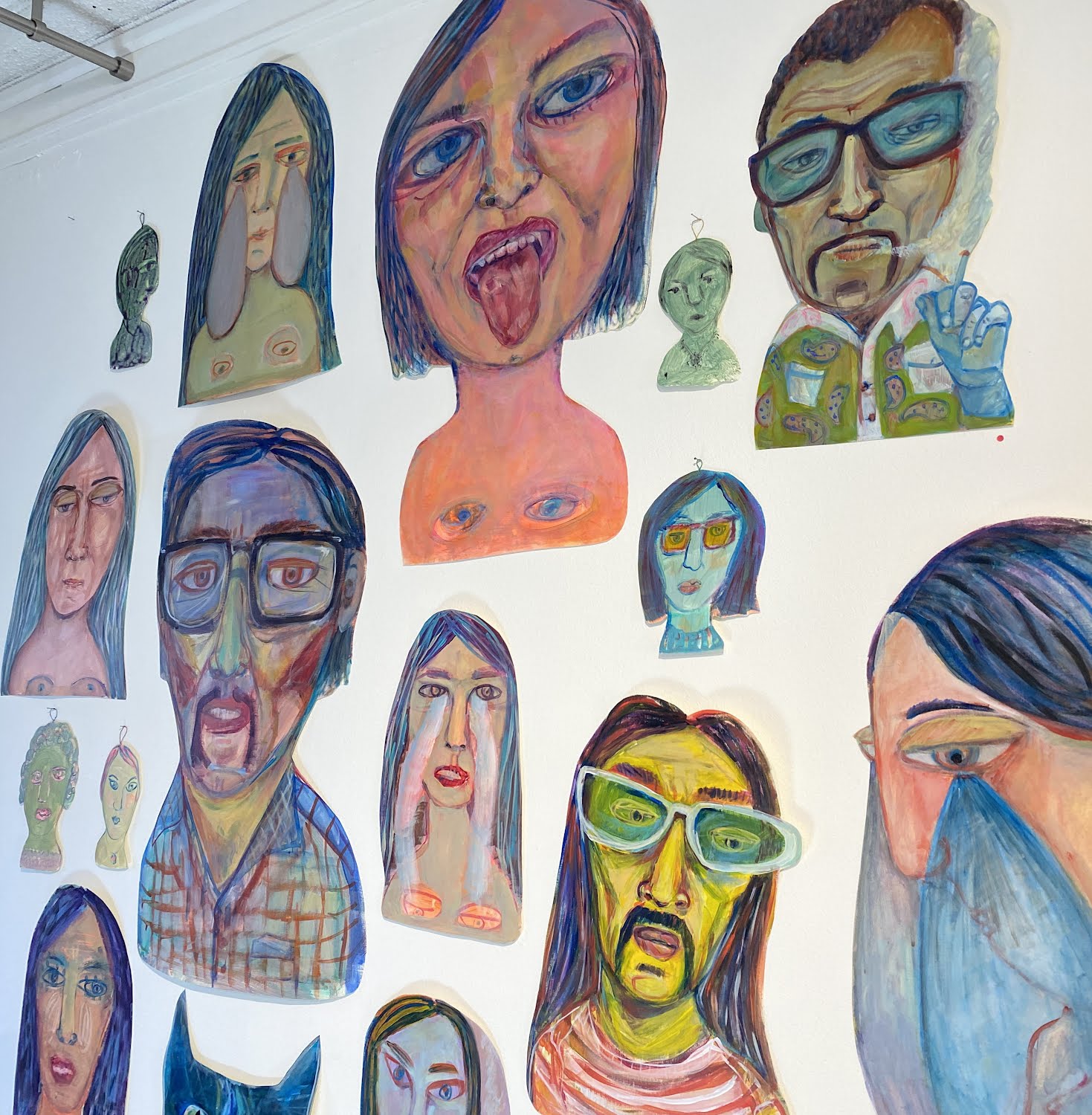 RW: One recurrent theme seems to be your interest in people passing through: regulars at old bars, people having their mug shots taken, street photography from the mid-20th century. What do you find so fascinating about these snapshots of strangers?

MG: What is more compelling than the face of another human? Over the years I've been fascinated by the "other." An unknown face in a crowd, nightclub, bar. It started with my urge to paint a stranger, and I needed good quality black and white, well-lit photos — mugshots and Weegee street scenes were perfect. As I painted these faces of strangers, I became more and more attached to them as people, unknowns yet somehow connected to me. I thought I was doing it as a way to look at and practice creating faces without using the face of someone I know or that others would necessarily recognize. I don't really care about making accurate representations; it would be boring to recreate them perfectly. I try to give a little emotional twist, to add some weirdness. But not through distortion or deliberate changes to their look, more through my own limitations of skill and addition of feeling. Trying to get to the heart of whatever attracted me to them in the first place — a look in their eyes?  I can't really explain it. 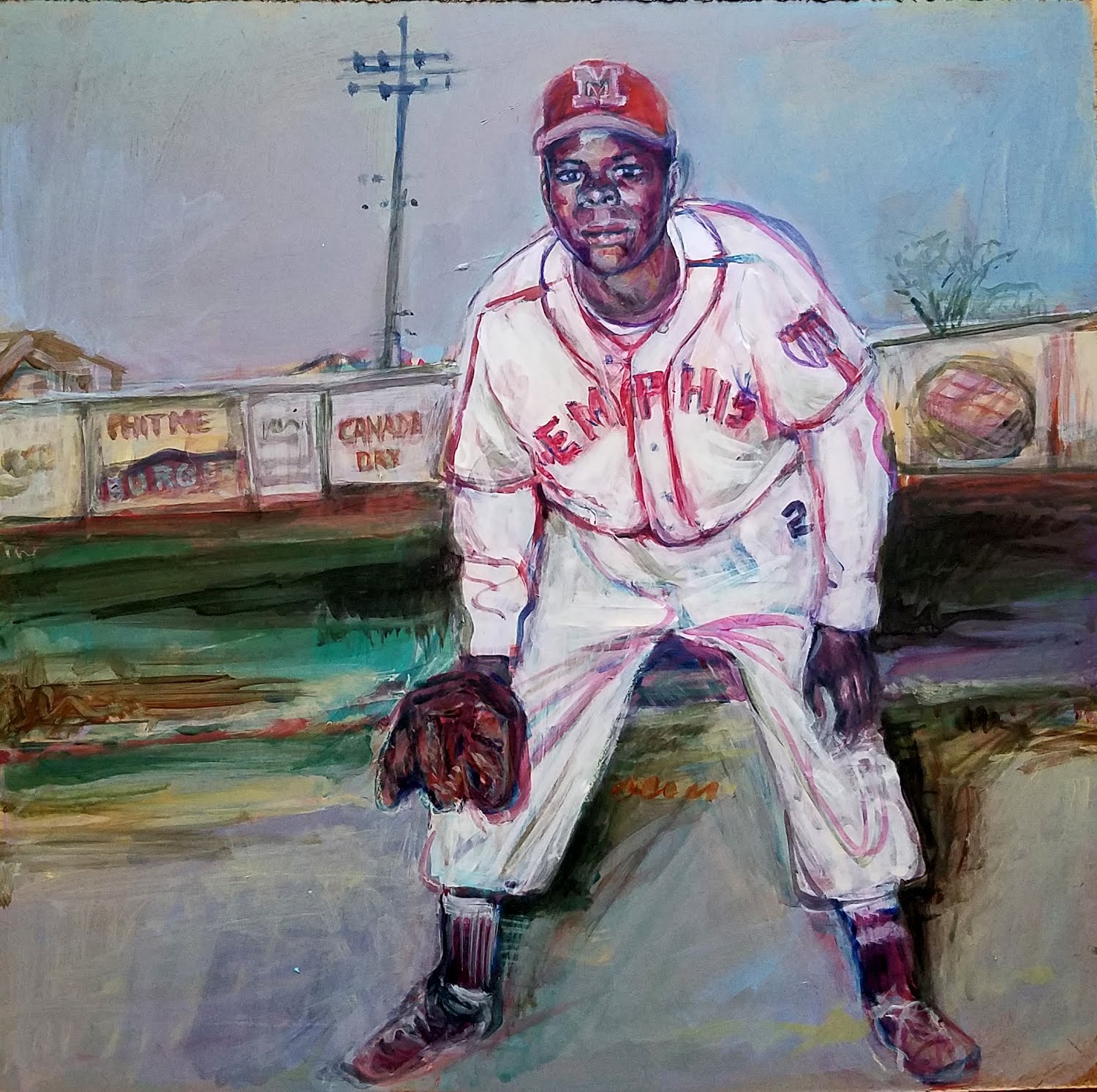 RW: The past comes to life in your work in the form of found images, sometimes playfully as in your recreations of Vaudeville Stage Illusion Patents, and sometimes with a great reverence, as in your portraits of players from the Negro Baseball League. And your collages are full of old ads and ephemera. Is what drives this an interest in artifacts from a bygone era, or is that past still connected to our present do you think?

MG: I do really appreciate artifacts from a bygone era as you say, and I have a ton of source materials — old newspapers, magazines, hand-written letters, scrapbooks, Playboy magazines, corporate annual reports from the 1960s, black and white snapshots, school notebooks with class notes from the 1950s, maps.. So many things. Part of it is a love of recycling, the desire to turn a thing into another thing, as when I use these materials for collages. To add a layer of meaning to my art through materials that have passed through another life, other hands, now carried forward.

The Negro League player series started because of my love of baseball and the discovery of the photographs of Ernest Withers who documented Memphis baseball players and musicians in the 1950s.  The wrestler series and circus sideshow series were both from a desire to show the "other," and especially with the sideshow freaks, to show their beauty and dignity.

Weirdness, otherness, are important to me to try to portray, maybe I also relate in some way. The vast range of humanity!

From early on I wanted to make something — to draw something. I have a strong memory of my first artistic frustration in kindergarten when the yarn hair of my pretty girl face portrait (another face!) kept sticking to my fingers instead of the construction paper. I stayed late as my teacher hovered, unable to leave until I finally finished. Not my original vision of a head of curly blonde yarn hair but with one side curly, the other stuck down straight. My first sense of NEEDING to persist and also that it was "good enough." That desire to just make a thing and to try hard to make it good enough has carried me forward. I've always found a way to keep making art while also having a family and working a day job. 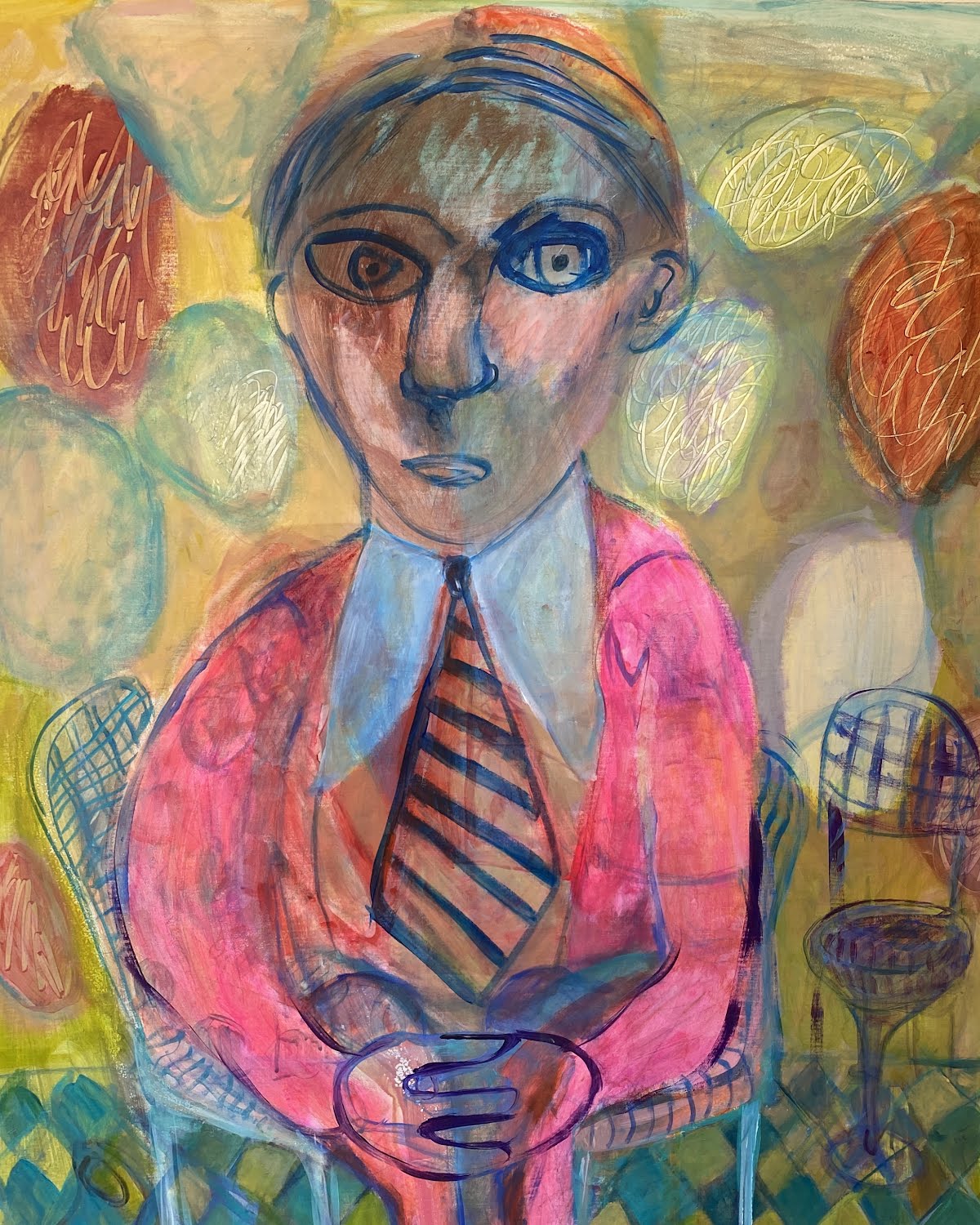 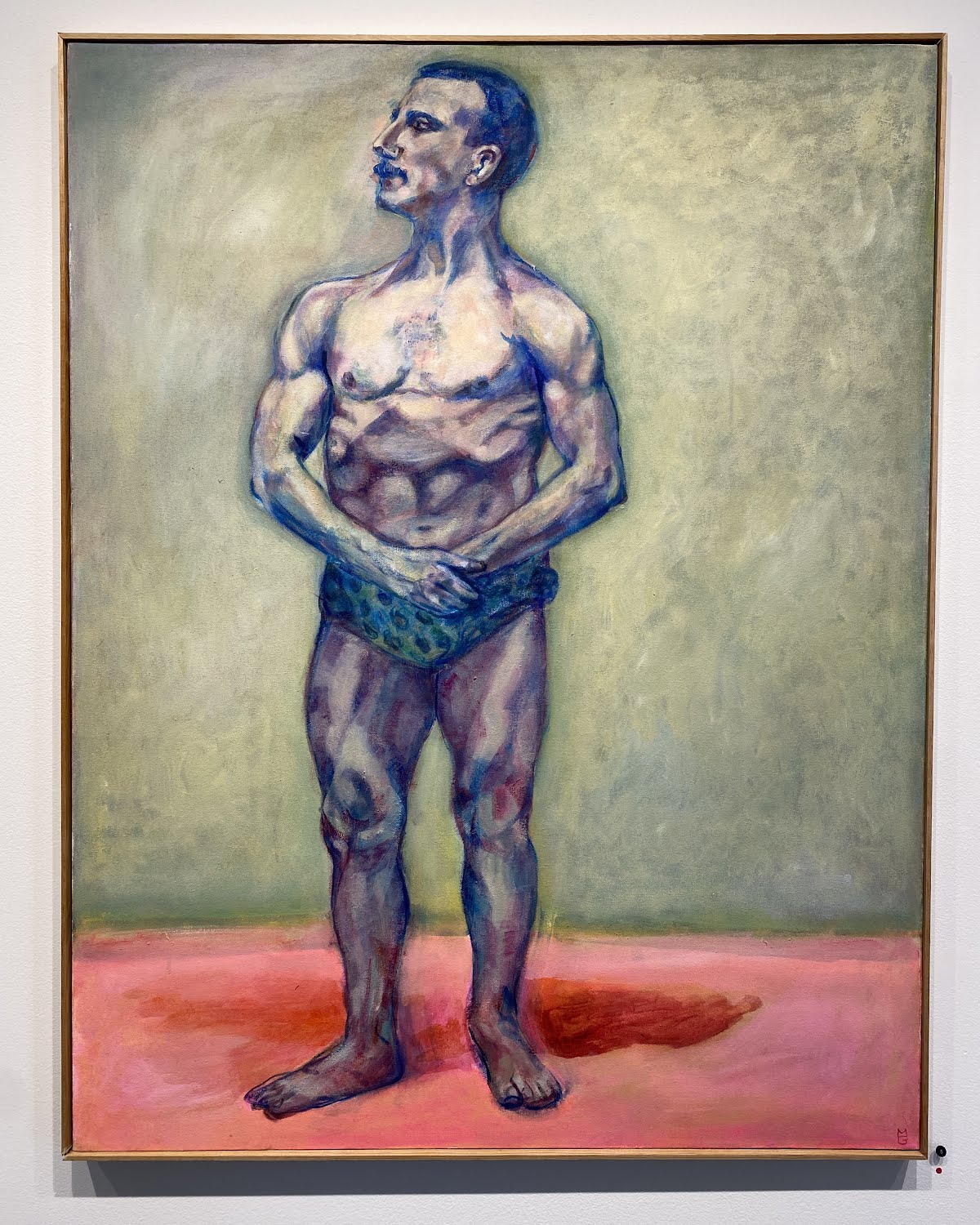 MG: I did grow up here, and after graduating with my BFA, I contemplated what to do with that degree. What's next? Take more classes to become a graphic designer to support myself, then paint for the sake of personal creation? I got some good advice from an artist/graphic designer friend, that it's very hard to give that passion to two jobs. I took it to heart and my work life has always been separate from my creative life. I've always been in the Mpls/St Paul art scene, both as a gallery-goer and a participant. Over the years I've been in many shows and also put on my own shows through my friends' bike shop downtown One on One Bicycle. That way I would be able to fill the walls with as much art as I could cram in and then have a big party.

Rosalux is such a well known creative collective, for 20 years now! I've been to so many amazing shows at their various locations. When I was invited in 2019 to submit to join I jumped at the chance to be part of it. The pandemic delayed our schedule for over a year, so my recent February show was my first Rosalux show. It's so wonderful to have a dedicated space and to be able to plan for my next show, Feb 2023, when I have the entire space and can make it into somewhat of an art environment with weird props and other touchable objects as well as art.

RW: What is the best way for people to follow and support your work? Do you have any shows or events coming up you’d like to promote?

MG: My Instagram account marygibneyart and FB Mary Gibney Art are usually the way I promote and announce art stuff. My website marygibney.com is mostly a gallery of past art and shows; it's a good way to see all my obsessions and series. Email mary@marygibney.com to reach me for art requests and to get on my mailing list. Direct messages from IG and FB are good too. I will be in the MPLSART Sketchbook art show at Gamut Gallery opening on March 18th, and my next Rosalux show will be a solo show in Feb 2023. ◼︎ 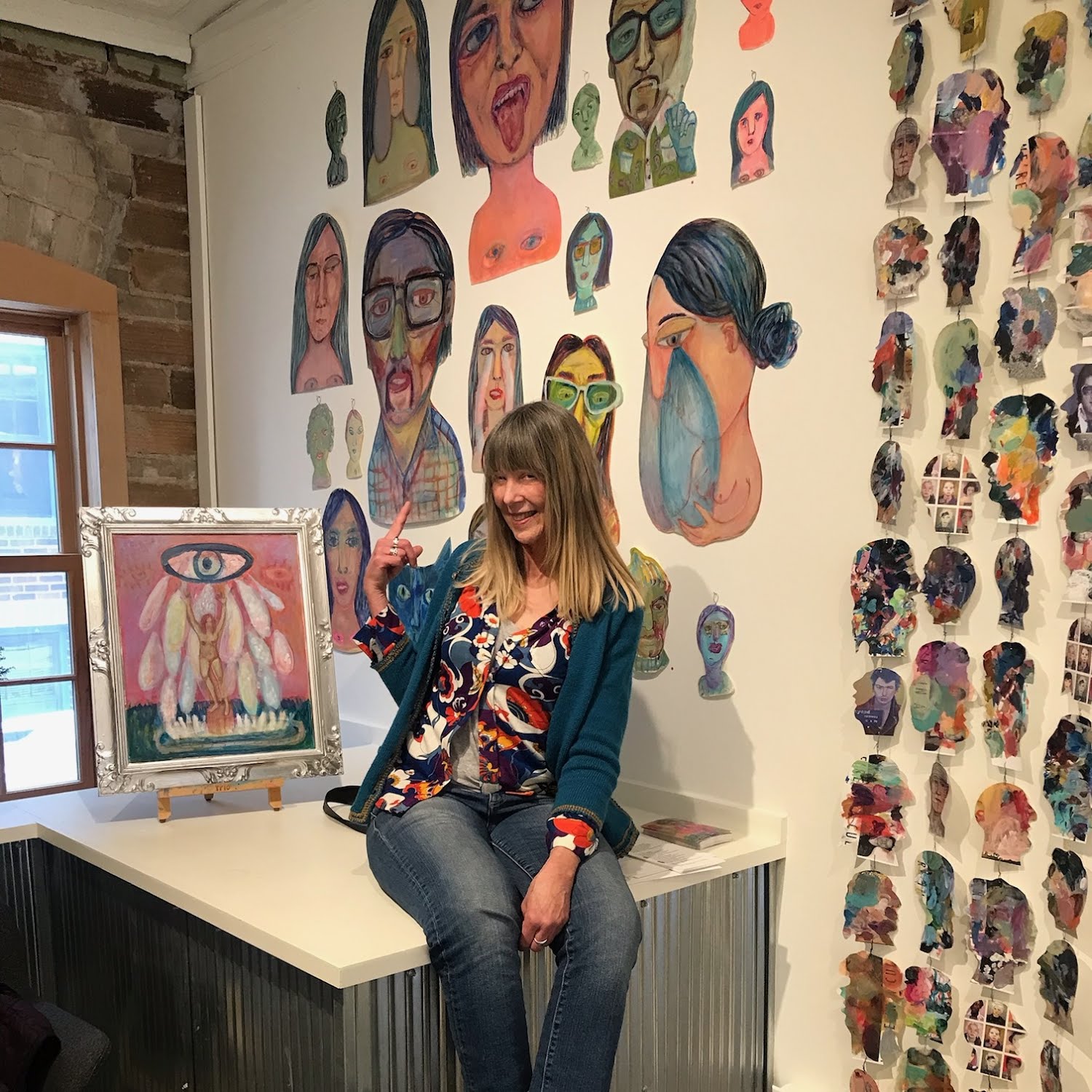 The artist, one face among many. Banner image: Fight Me Baby (detail). All images courtesy of the artist.