The recently published book collects drawings, photos, and thoughts from the artist's ongoing practice of walking through the urban and suburban landscapes

Walkers are 'practitioners of the city,' for the city is made to be walked. A city is a language, a repository of possibilities, and walking is the act of speaking that language, of selecting from those possibilities. Just as language limits what can be said, architecture limits where one can walk, but the walker invents other ways to go.” ― Rebecca Solnit, Wanderlust: A History of Walking

During the annus horribilis that was 2020, more specifically between the vernal equinoxes of 2020 and 2021 (and aren’t these years of pandemic, racial violence, and political destabilization starting to bleed together?), artist and curator John Schuerman went for a walk. Many walks, in fact.

He did the walk a friend often takes. He and another friend started from their homes and stopped when they were six feet apart. A long-time participant in the annual Mayday celebration, he ventured to the parade route and pondered the festival’s absence.

After George Floyd was murdered, not far from Schuerman's Minneapolis home, the artist went to the memorial site. “I got to the mural of George Floyd, appreciated the beauty, and kept walking,” he writes in his recently released book Unstillness: A Book of Walks. “I saw rampant destruction and thought about the losses. Dreams up in smoke, deep costs….”

A hand-drawn map of Schuerman's walk along Lake Street after the uprising in June of 2020, past the 5th and 3rd police precinct buildings, the sites of protest and destruction, and the relative calm of the neighborhood south of Lake. Powderhorn Park is noted in green and blue.

Such ponderings inspired Schuerman to investigate the “repository of other possibilities” the city held as he continued his walking practice, expanding the parameters as he delved more deeply into “other ways to go,” as Solnit put it. As evidenced in Unstillness, he’d already begun pairing his walks with photographs, drawings, and reflections. Then, Schuerman decided to walk the perimeter of the Third Precinct in Minneapolis, several times — not the abandoned police building, but the whole section of the city it oversaw.

The book records how he negotiated the concrete edges and sharp corners of the built environment, made art from “arsonist ashes,” filtered water from lakes and streams to drink, tented at a former homeless campsite, and drew colorful sketches of places he encountered (sometimes while sitting on a stool made from refuse nearby).

He posted much of this material on Facebook — along with his comments on the destruction he found, police defunding efforts versus the rise in violent crime, gun-toting vigilantes safeguarding a block, a city-sanctioned homeless encampment, and his own intentions. Unstillness is a record, an archive, of those posts.

“I felt like I had to do this walk,” he writes at the end of his first precinct venture. “It wasn’t pleasant, but it was real. I took some risks to reckon with things. I’m left with many questions. How much safer was I on this walk because I’m male? Because I’m white? Will dis-empowering and demonizing the police lead to more violence in the long run as it has in the short run? Can police reform happen with a corrupt union in place? (A problem not exclusive to the police.) Is America capable of working for its collective? Or are we bound to a culture of self-interest? Am I?” 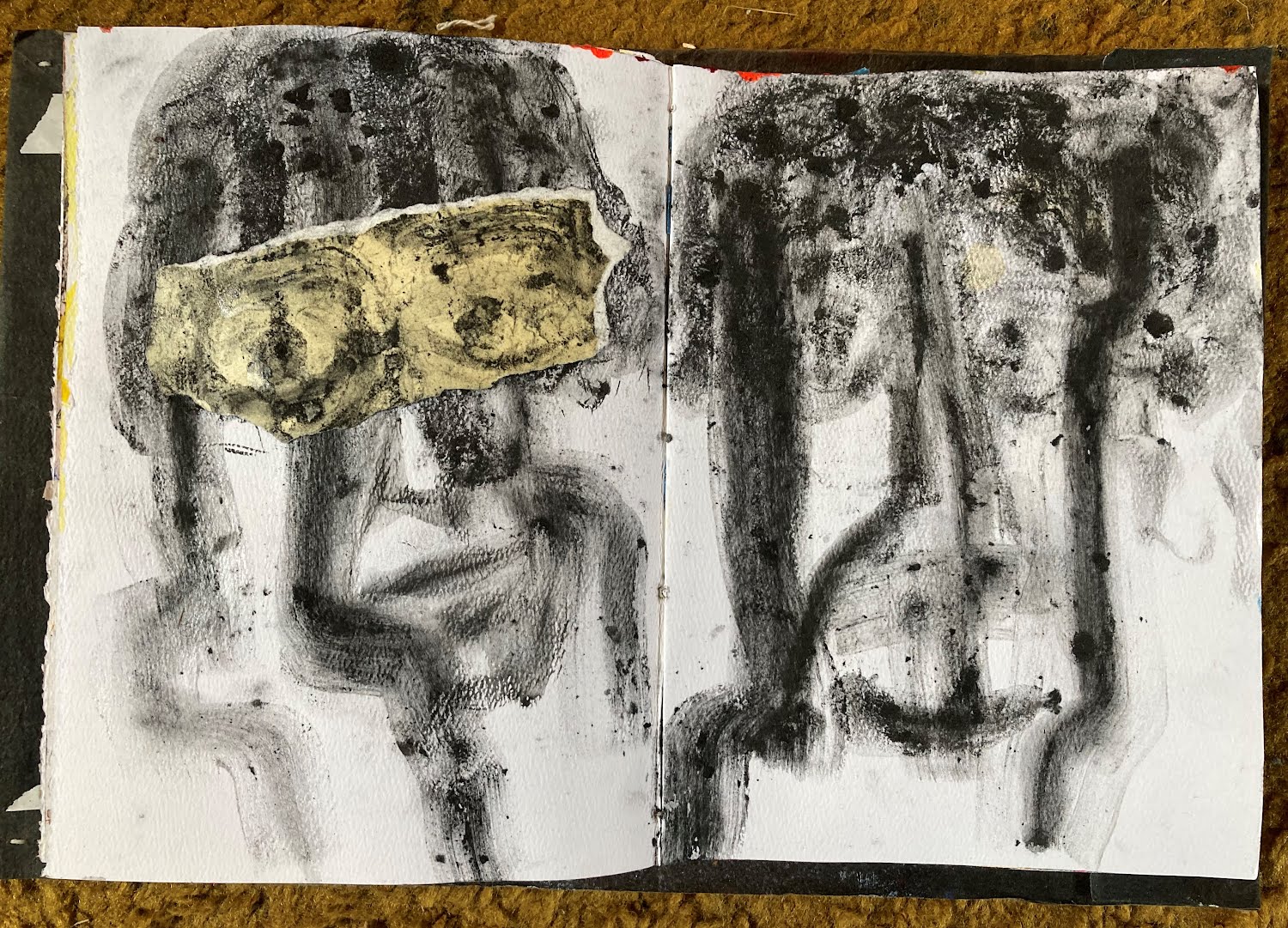 Self-portraits drawn with "arsonist ashes," from Schuerman's walk around the border of the Third Precinct.

While he doesn’t provide any answers, he asks the right questions. Some of which deserve an unequivocal “yes” in response; others are part of ongoing public discussions as well as private self-reckoning. Paul Klee’s quote, “A line is a dot that went for a walk,” comes to mind, not least because Schuerman is an artist with formidable technical expertise (see his exhibition drawings), a proclivity for material innovation, and a keen eye for organizing space and symbol as an abstractionist.

He’s also a person of depth and commitment. Being male and white certainly protected him, as it does in almost any area of the United States. But being thoughtful, compassionate, respectful, open, and observational didn’t hurt either.

Fear, grief, violence, destruction, and threat permeate Schuerman’s entries. What he’s recorded, in essence, is a practice of walking as witness. That word, from the Old English, says an online etymology dictionary, means “attestation of fact, event, etc., from personal knowledge.” Circa 1300, to “bear testimony.” Twenty miles over 24 hours; that’s how long the Third Precinct walk took. That’s a pilgrimage. Late 1300s: an “act of journeying through a strange country to a holy place.” Strange, indeed, the Third Precinct had become; apocalyptic, contested, full of sorrow and heartbreak, with a memorial, a holy place, at its core.

At the same time, as Michel de Certeau wrote in The Practice of Everday Life, “if it is true that a spatial order organizes an ensemble of possibilities (e.g., by a place in which one can move) and interdictions (e.g., by a wall that prevents one from going further), then the walker actualizes some of these possibilities. In that way, he makes them exist as well as emerge. But he also moves them about and he invents others, since the crossing, drifting away, or improvisation of walking privilege, transform, or abandon spatial elements."

In his entries and his book, Schuerman curates his walking practice with a visual history that includes his doctored maps, his artistic responses, photographic documentation, and images of himself looking solemn or perplexed. As such, it’s an extremely personal or subjective take on this experiment; also one that pulls us back into a time period of tremendous anxiety and recognition.

It’s a relief when Schuerman turns to his own block, drawing his walking practice inward with a geographical tightness that feels safer, more familiar. Soon enough, though, he starts walking to places in the Third Precinct where more recent crime has occurred. The most haunting image in the book is of a sheet for covering the deceased, still unused, crisp and folded. 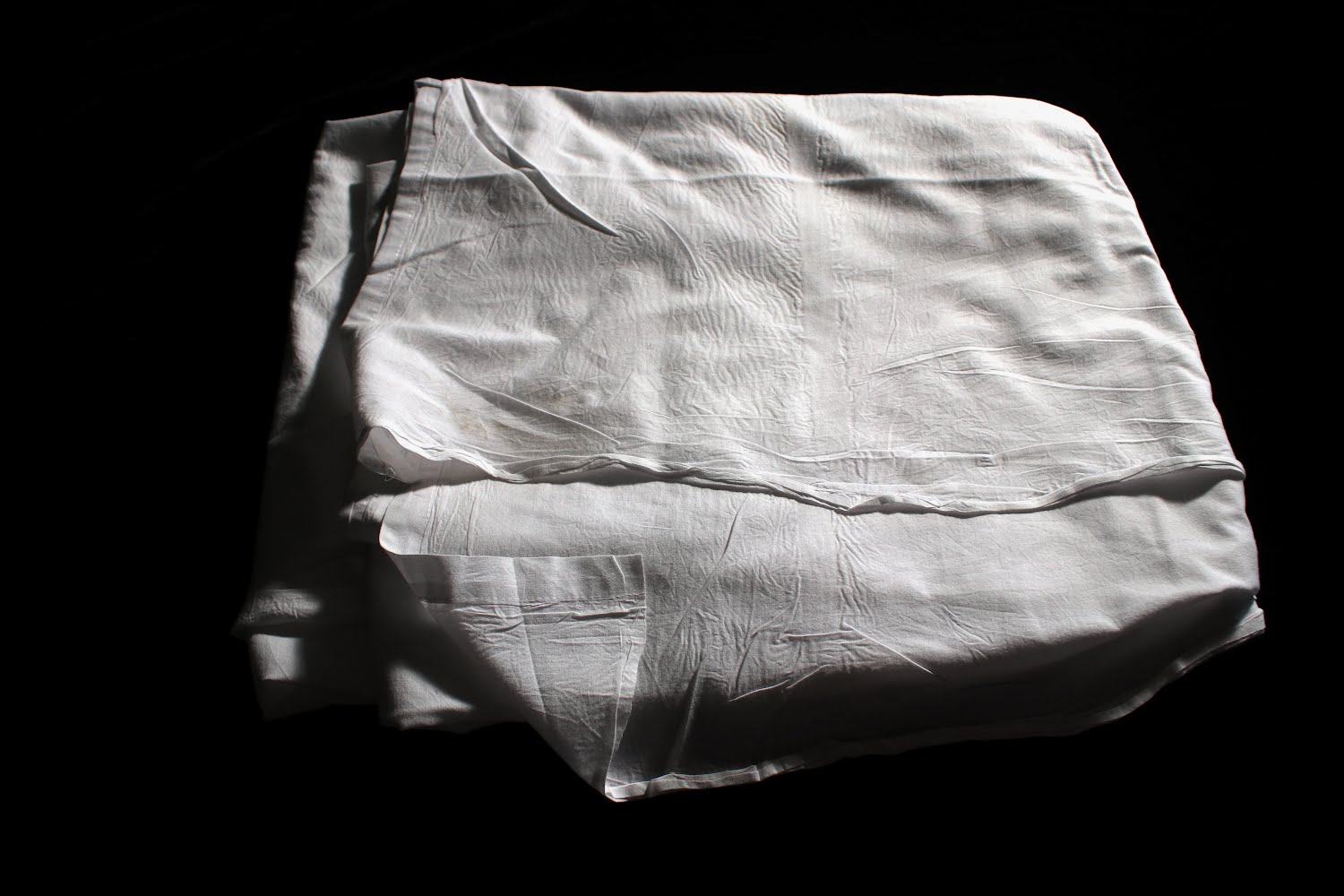 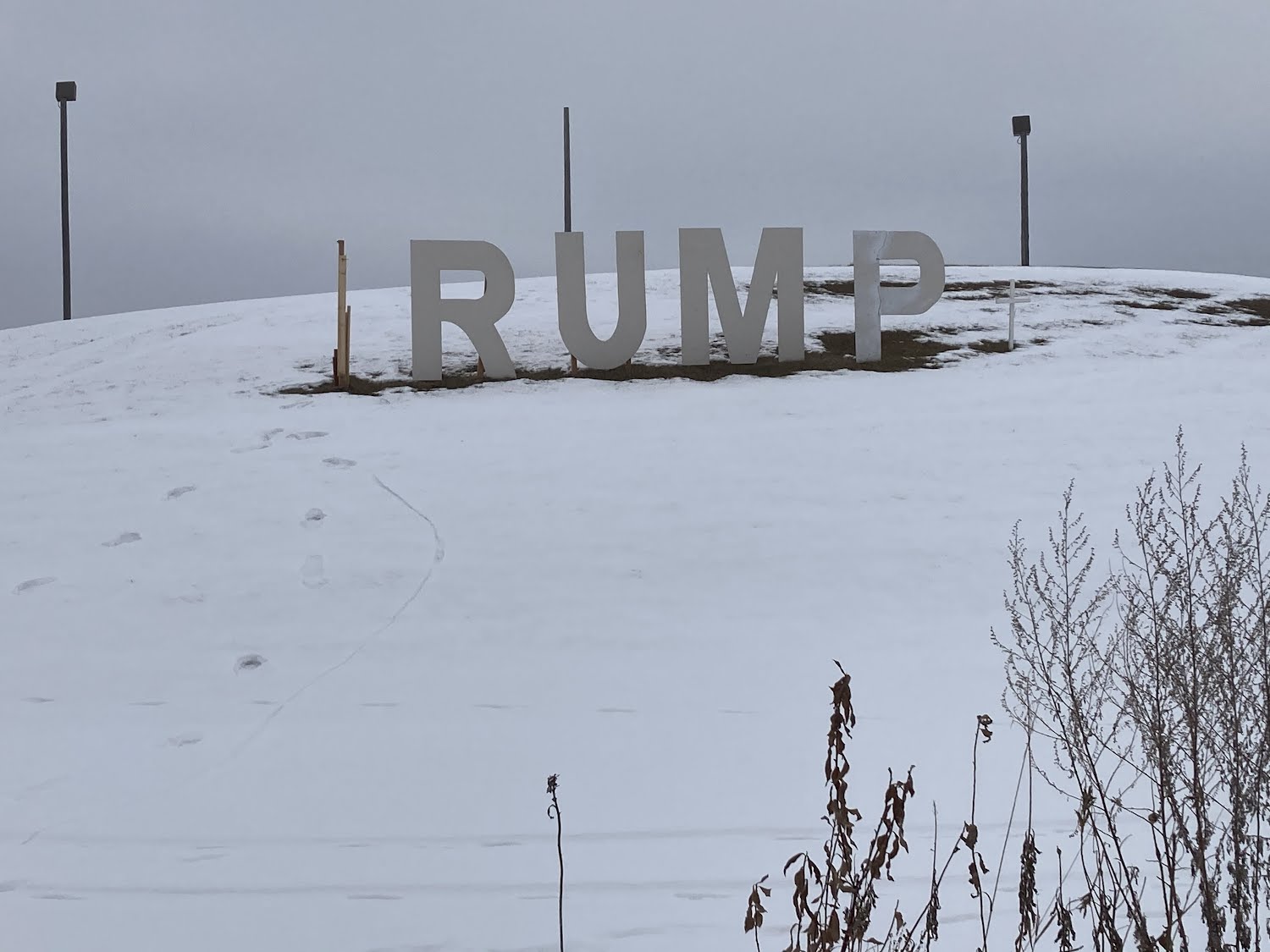 Top: Schuerman's photo from a walk to the site of a recent murder in Minneapolis. Bottom: A Trump sign with footsteps, seen on a walk into Scott County, south of Minneapolis.

Schuerman takes a stand: “I think we need to expect better of our city council and our police department. Neither choice we are being offered is acceptable: a police force built on systemic racism or the lawlessness and rising violent crime without police presence. There are better options. If the city council can’t find these, vote them out.”

He also walks to Scott County (17 miles away) after the January 6th insurrection to experience Trump Country: “I did not expect to figure anything out on this walk. Just needed to do it.” He walks in search of waterways not impeded by storm sewers, roadways, or development. He walks to Accent Signage Systems, where he used to work, reflecting on the mass shooting that occurred there, then continues on to other former workplaces “remembering the playful hard work that happened here.” He ends with a pilgrimage to the Brooklyn Park Police station, joining people gathered in memory of Daunte Wright.

He also includes, in Unstillness, a line drawing he created of his driveway, “where I started my walking projects a few years back. I memorized this line drawing and practiced walking it out step by step on a driveway,” making his artistic practice a walking practice, and vice versa. That’s just one part of a frayed and fragmented, holey and holy urban fabric Schuerman records in Unstillness, woven in skeins and patches from physical endurance and bold need, its entirety “a long walk thinking” as Schuerman writes, a testament of witness during a long, dark period in the city’s history. ◼︎

A recent painting that Schuerman posted to Facebook: "For solstice I walked in circles on the frozen lake seeking stillness, which came after a while. Marking time, the cycle of light, the orbit of the earth, and all the other circles that guide."

Unstillness: A Book of Walks is available for purchase directly from the artist. You can connect with him and see more of his work at his website: schuermanfineart.com. And you can follow him on Instagram @instinctmpls.

Banner image: Schuerman's imagining of the nonexistent 2020 Mayday Parade, with the artist shown at right. All images are courtesy of the artist.