I have to begin with a confession: I’ve long been skeptical of representational landscape painting. Like any other bias, there’s no particularly good reason for this one. Maybe it’s because I grew up in Maine, along the rocky coastline of Winslow Homer and Andrew Wyeth, where every field trip to the local museum felt like a rerun of the same breaking wave. Or maybe it’s that the view of the ocean — that enormous, always-entrancing mass — from my family’s favorite picnic spot was often blocked by a man in a fiddler cap and pleated trousers, his makeshift booth full of paintings reprinted for unwitting tourists.

When I was assigned to review Joshua Cunningham’s exhibition of new paintings at Groveland Gallery, my bias resurfaced — this again? But, upon entering the exhibition I was greeted warmly by Sally Johnson, the gallery’s director since 1983, and Joshua. We stood together in the foyer, making conversation about the previous night’s snowfall — how difficult it was to dig ourselves out that morning, how bright it made the city seem. Then we visited the paintings, which lovingly evoke every Minnesota season.

Joshua grew up in Isanti, a rural community an hour north of the Twin Cities, where he now lives. He works in the plein air tradition, setting up his easel and palette in nature — or sometimes, when exposed to winter winds, in the cargo space of his Toyota Highlander. Though each painting represents a different physical landscape in one pocket or another of the Upper Midwest, he speaks of his process philosophically, emphasizing the importance of attentiveness and repetition when scouting for a site. “The world’s so much bigger than us, and it’s always offering something unexpected,” he tells me. “It’s just about staying open to it.” 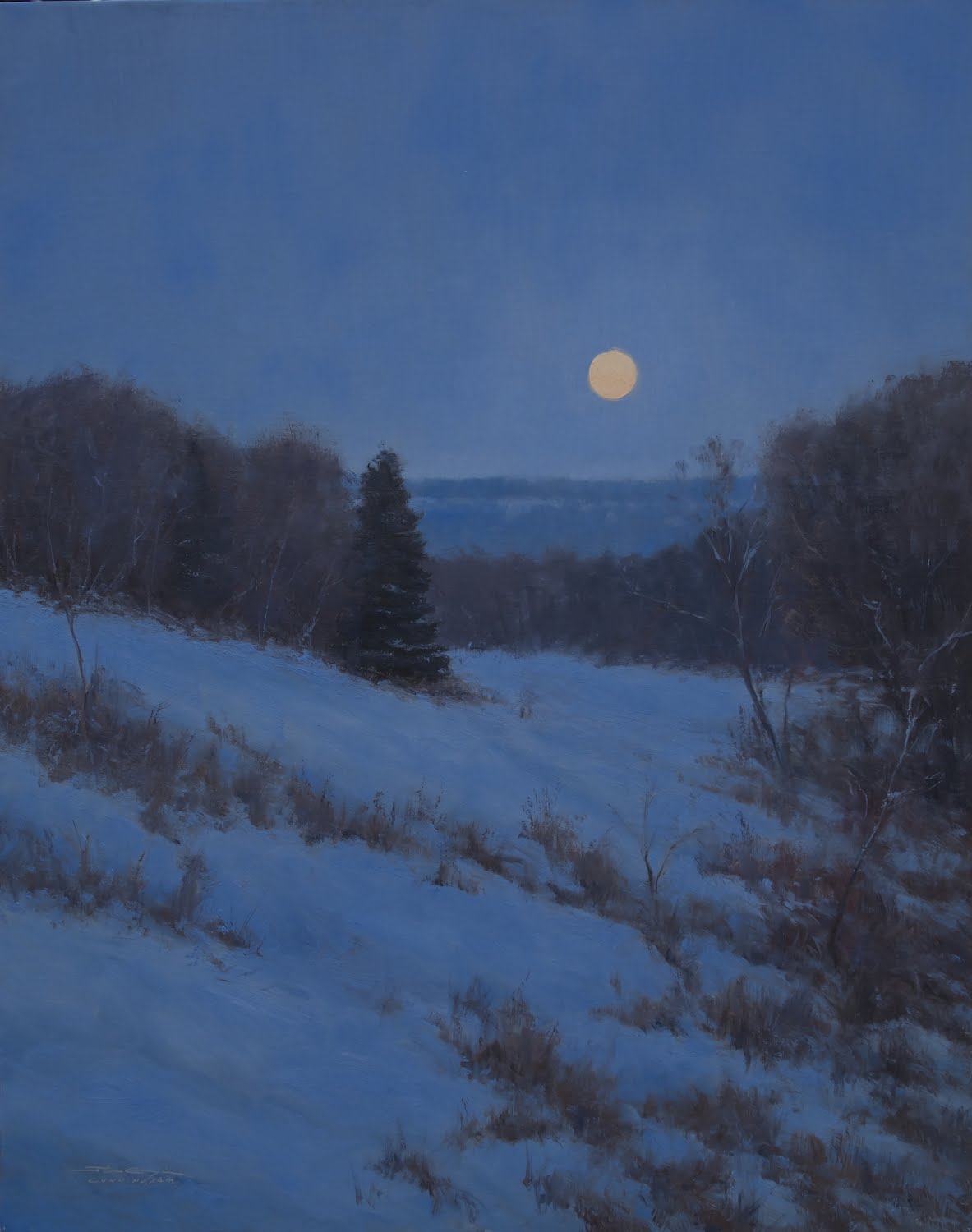 This approach is most evident in his story behind Mississippi Moonrise, which presents a moonlit hill spilling into a larger valley. “I was driving around looking for where the moon was going to come up,” he remembers. “I wasn’t finding anything and, as I’m going down into this valley, I’m thinking, ‘This is the wrong direction to find that moonrise.’” Just then, he came across a horse in the middle of the road, and a group of farmers hustling to corral it. While this scene unfolded, he looked up. “And that,” he says, gesturing to the painting, “was the scene out the window.”

My trepidation around landscape painting boils down to the field’s historical attempts at representing an idealized, capital-w Wilderness, which brush aside the messiness of living ecosystems. However, the opposite is true in Joshua’s compositions, which are the by-products of sustained engagement in singular locations. As he writes in his artist statement, many of the works featured in Further In were “created over half a dozen visits to the same place at the same time of day.” Each of these visits could stretch from three to six hours — enough time for Joshua to integrate into the local environment. 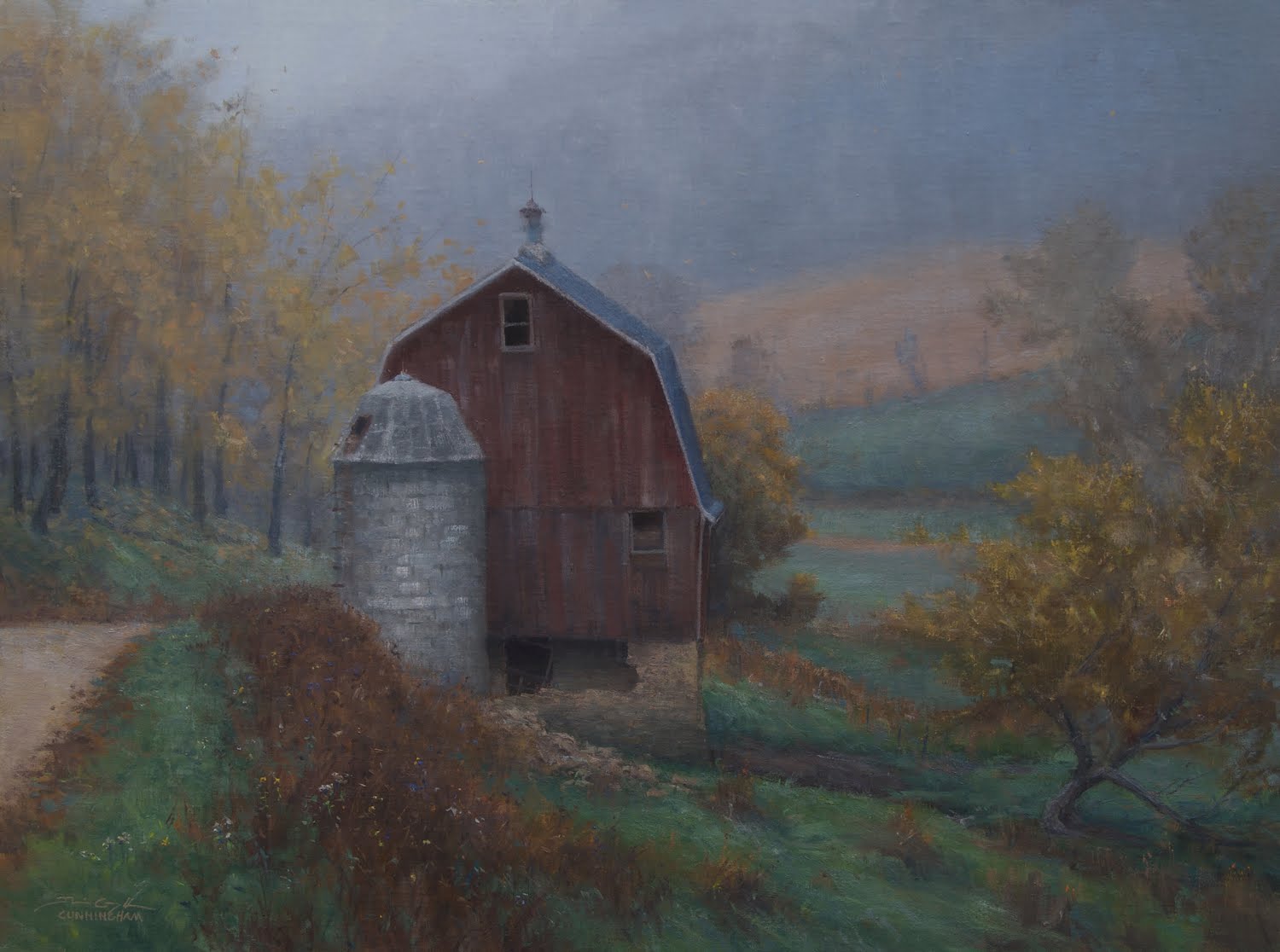 This commitment also provides enough time for the local environment to accommodate him. When he shows me Upper Mississippi Twilight, he recounts the families of river otters and beavers that encircled him while painting; with Fog and the Fall, which depicts a decaying barn alongside a dirt road, he acknowledges the farmers who slowed down when passing his station to avoid kicking up dust clouds. For each painting, there’s a rich periphery just outside the frame. These peripheries sometimes leak into the compositions, as is the case during summer evenings when his oils catch passing gnats.

Further In demonstrates that, at their best, landscape paintings are not simply representations of environments, but records of reciprocal relationships. In this sense, Joshua’s paintings seem like tender portraits of subjects enduring life cycles and transitions — between planetary rotations, seasons, and droughts. “Each painting felt like an invitation, and you want to show up in the best way to do right by it,” he says. “You don’t want to be a bad guest.” 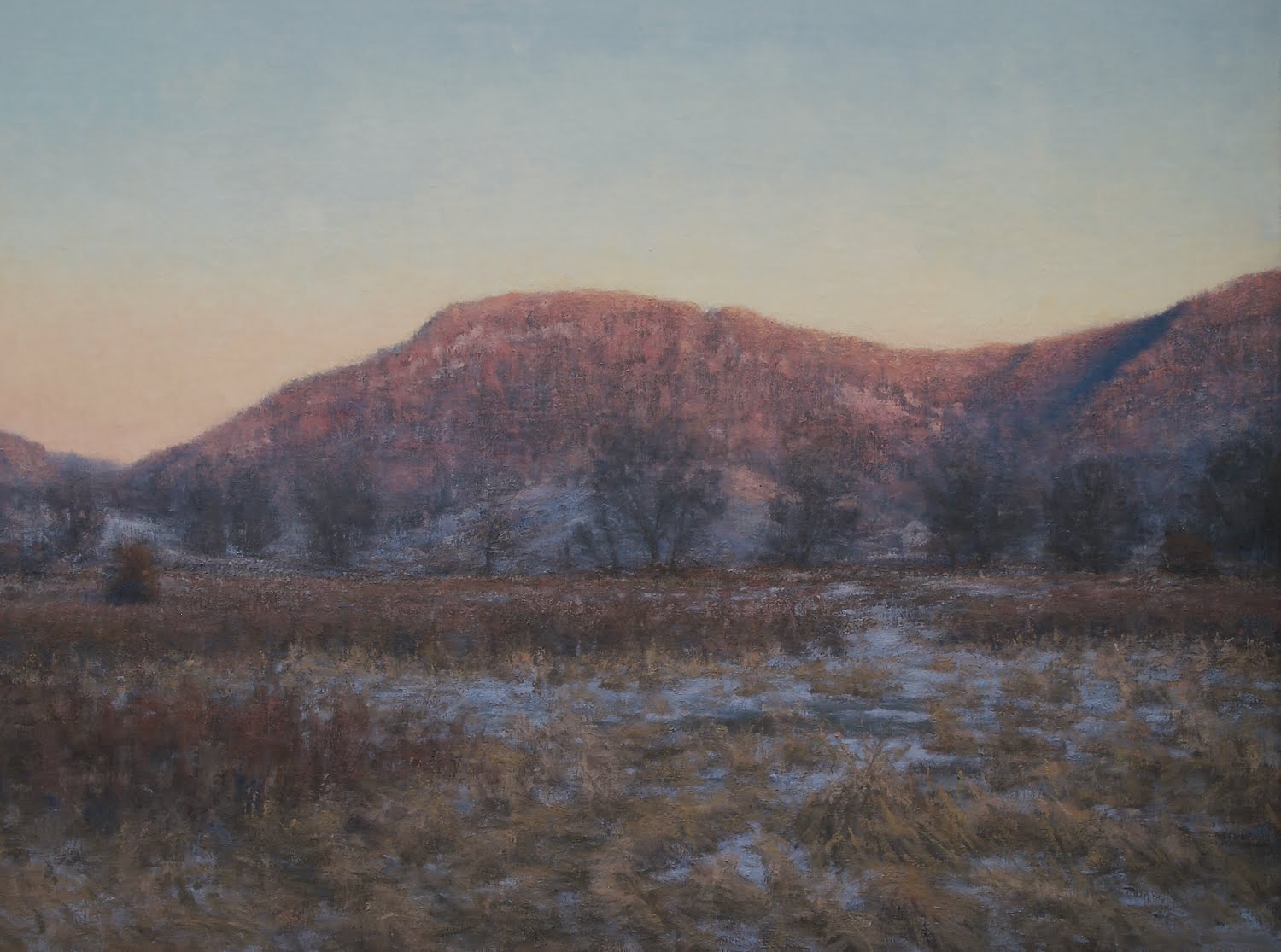 The exhibition’s title, Further In, refers to each landscape’s invitation to Joshua to notice more, to dig in deeper. But it should also serve as a suggestion to visitors of Groveland Gallery whose close examination will be rewarded. One of the largest paintings in the show, Crimson Crown, draws attention to the carved, tree-topped ridges of the Driftless region. From across the room, the painting holds the final hour of light on an early winter day. But closer in — an arm’s length, a breath away — the image transforms, as the whole forest recedes to individual trees. The effect is the result of Joshua applying an initial layer of paint on his linen canvas, and returning the next day to add another.

“As I was painting over that first layer, the ridges of the textures below caught the paint in different ways than would have been possible had I been doing it all on a clean canvas,” he notes. “Those recessed areas end up holding what feels like shadow.” While ecosystems are the outgrowth of increasingly complex interactions, Joshua’s landscapes are another form of accumulation — of oil layers, of hours, of moisture from the morning dew, of whatever invisible things the wind happens to blow onto the canvas.

Back at Groveland Gallery, it’s no wonder we began our conversation by chatting about the weather. In her acclaimed book How to Do Nothing, the artist Jenny Odell writes, “The fact that commenting on the weather is a cliché of small talk is actually a profound reminder that the weather is one of the only things we each know any other person must pay attention to.”1 In the discussion that followed, Joshua brought up the farmers and hunters he grew up with in Isanti as much as he did any other artistic influence. After all, he pointed out, a hunter and a plein air painter share the same fundamental practice: waiting quietly at an easel or camouflaged in a blind, staying open to whatever might come their way.

As I walked back to my car, I suddenly became aware of the sun and the almost overwhelming brightness it emitted when reflected by the snow. Distracted, I nearly slipped on a patch of exposed ice, but managed to recover and murmur a thank you before unlocking my door — a thank you to Joshua, an acknowledgment of our common ground. ◼︎ 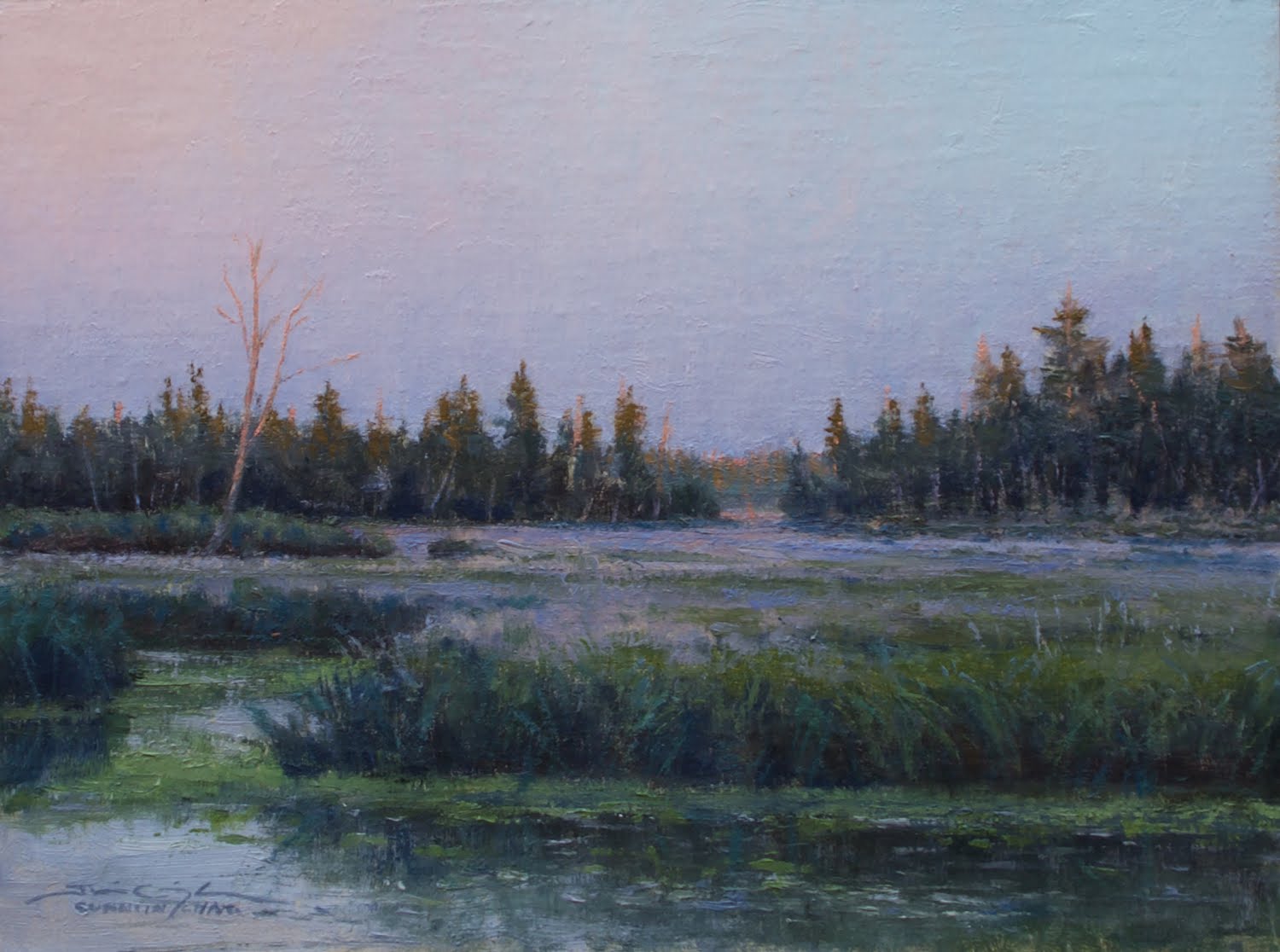 Further In is on view at Groveland Gallery through January 8, 2022. Gallery hours: Tuesday - Saturday, 12 - 5pm. For more info, visit grovelandgallery.com or follow the gallery on Instagram @grovelandgallery and the artist @joshua.l.cunningham