The DJ, curator, zine-maker, and public artist casts her eyes - and pushes her audience - towards a future for the people

My conversation with DJ and curator Yasmeenah Sideak-Jama takes place over Zoom on an early Fall evening, when she is visiting the home of a friend, meeting her friend's baby for the first time since its birth. She takes time from her jubilation to talk with me about her work, describing her adoration for music and community as though it’s been preordained.

She grew up the middle sibling of two brothers, in upstate New York, Ohio, and intermittently Minnesota. Yasmeenah recalls through and across all these places the ever-present sounds and visuals of music programming. MTV, VH1, and BET are remembered as less of a pastime and more of a curriculum. She describes her adolescent self as animated, exuberant, often the “weird kid.” “I spent a lot of time alone,” she says. “If it wasn’t watching, it was acting, singing, writing.”

The same holds true today, though Yasmeenah​'s categories of work are far from solitary in nature. It’s become more or less apparent that Yasmeenah’s multidisciplinary passions align with the most virtuous aims of the popular culture that once engrossed her: to fill a space, adorn it, and make those in it — as many as possible — feel held and seen. As a DJ, Yasmeenah's more audible works traffic the airways of the likes of KFAI and KRSM and have charged the rooms of any number of functions across the Twin Cities.

Yasmeenah goes on to share her proposal for a world, more specifically a community, in which Black Minnesotans can sense and grasp freedom wherever it lay. It’s through a myriad of stories told through and about her work that Yasmeenah makes clear at the end of the day, these liberatory strivings are the goal. And while DJing has long been her praxis of choice, Yasmeenah’s means to the ends of freedom have expanded in recent years to include photography, organizing, and curating.

Of course, song’s place in Yasmeenah vision of the future is never far off. If anything, communicating through selected sounds has more than prepared Yasmeenah for the pensive onlookers and careful readers of the zines and billboards she’s created. In either sphere, communication is king —  to connect an audience with ideas both ephemeral and concrete.

“Throwing a party is curation to me,” Yasmeenah says. “I don’t think it's always recognized as such… Dealing with the curation of parties you’re also dealing with the social hierarchies that exist. The duty of the DJ is to do that research. I have to agitate and push and challenge people out of that comfort zone… With an exhibit, intellect is usually placed at the forefront. At a party, every energy is welcomed. The lovers, the awkward person standing in the corner, the friends ki-ki-ing. You have to meet [everyone] where they’re at.”

Even still, Yasmeenah notes, “DJing could only cover so much of what I wanted to convey. [Visual] art gives me that room to be more clear about how I want people to feel. Because what's in front of you is what's in front.” 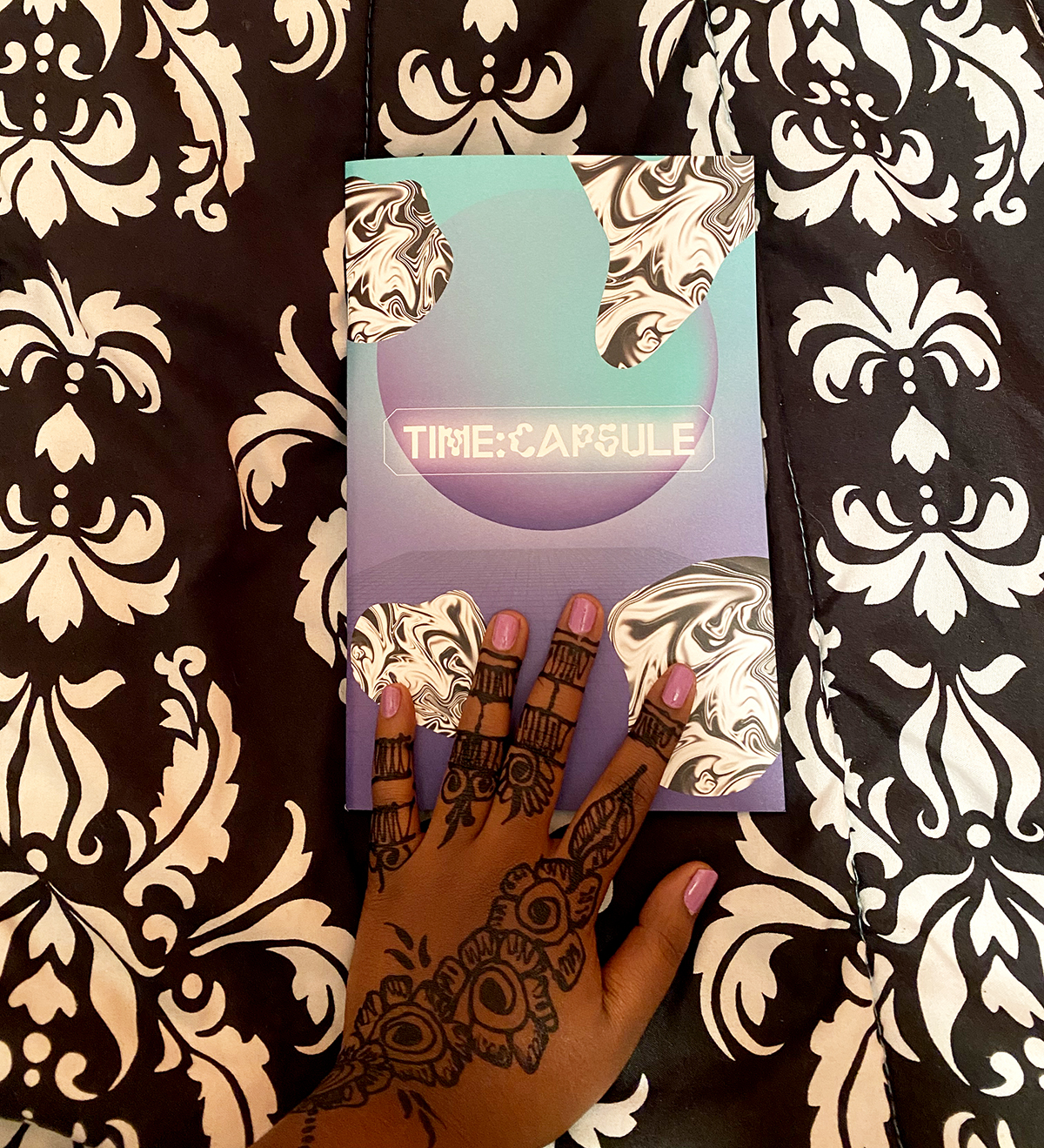 Time:Capsule, a collaborative zine edited by Yasmeenah and Maryama Dahir and featuring 20 Minnesota-based artists. Available for purchase here. Photo courtesy of the artist.

In the summer of 2020, she expanded her practice with the creation of Time:Capsule. Though dubbed a zine, the collaborative project between Yasmeenah and Maryama Dahir fashions itself as more of an anthology — a living expression of Black voice and thought in a climate laden with anti-Black violence. Yasmeenah recalls the undertaking of Time:Capsule in terms that honor the process's tediousness as much as they do its pleasure. One of these pleasures, for Yasmeenah, was paying every artist for their contribution in a season that was full of financial strife for creatives, especially Black ones. In addition, proceeds from the sale of Time:Capsule go directly to supporting Black trans and nonbinary youth in Minnesota through a mutual aid fund created in partnership with the organization Women for Political Change. The raison d’etre of Time:Capsule is summed up by Yasmeenah in the words of Nina Simone, from 1987: “An artist’s duty is to reflect the times.”

Yasmeenah’s most recent project shares many of the ambitions of Time Capsule, but on a different scale of magnitude. The newly unveiled billboard, aptly titled Authority and Visibility, sits at the entrance of the Franconia Sculpture Park in Shafer, Minnesota. The semi-truck-sized board features the monochromatic portraits of 20 Black Minnesotans and stands at the crossroads of Highways 8 and 95, both of which run through the state. Atop the photographs is a message layered in translucent yellows, greens, and reds. It reads, Here we are for now. How well prepared are you / To meet the changes necessary / To make the world a more human dwelling place? 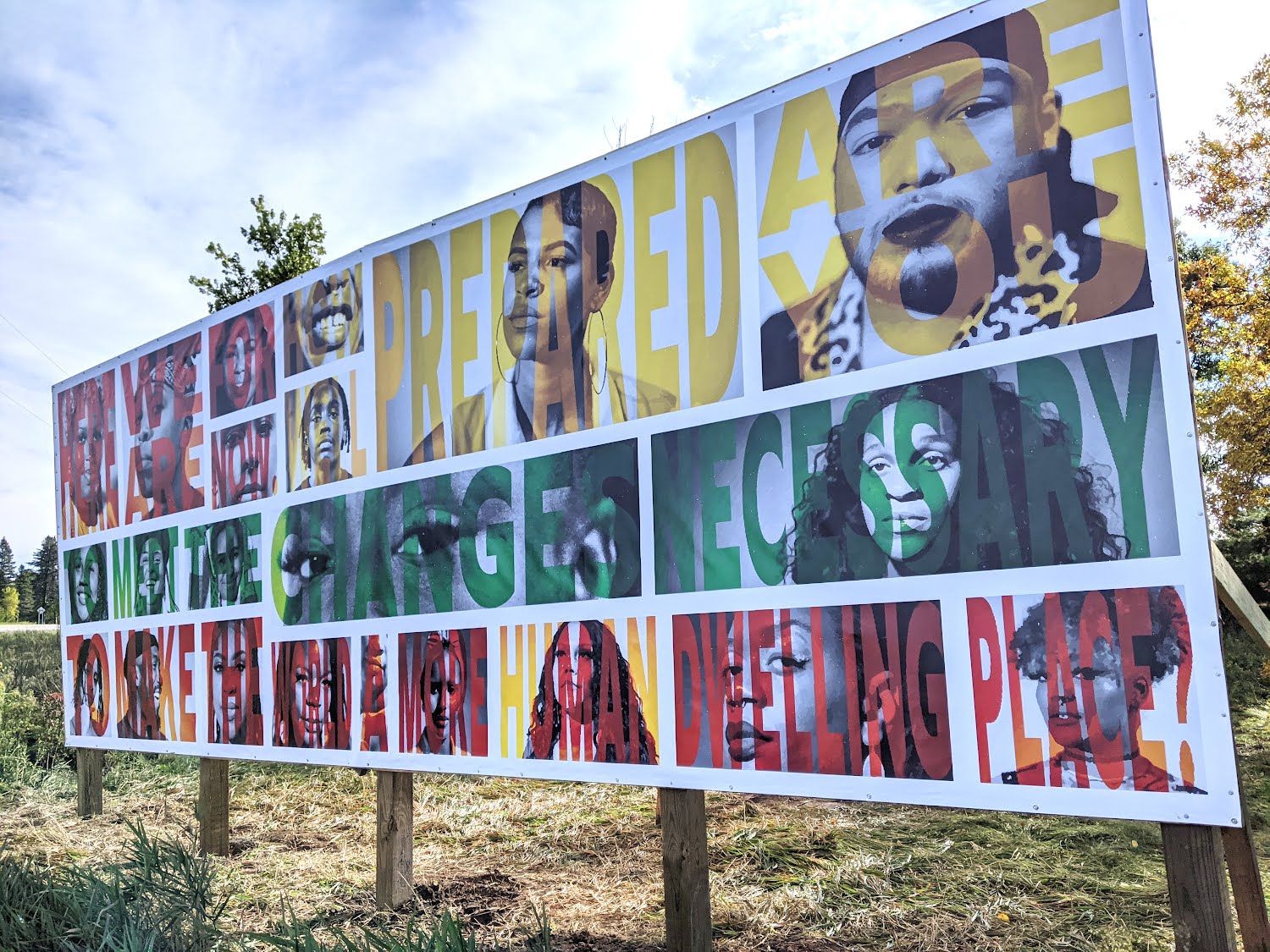 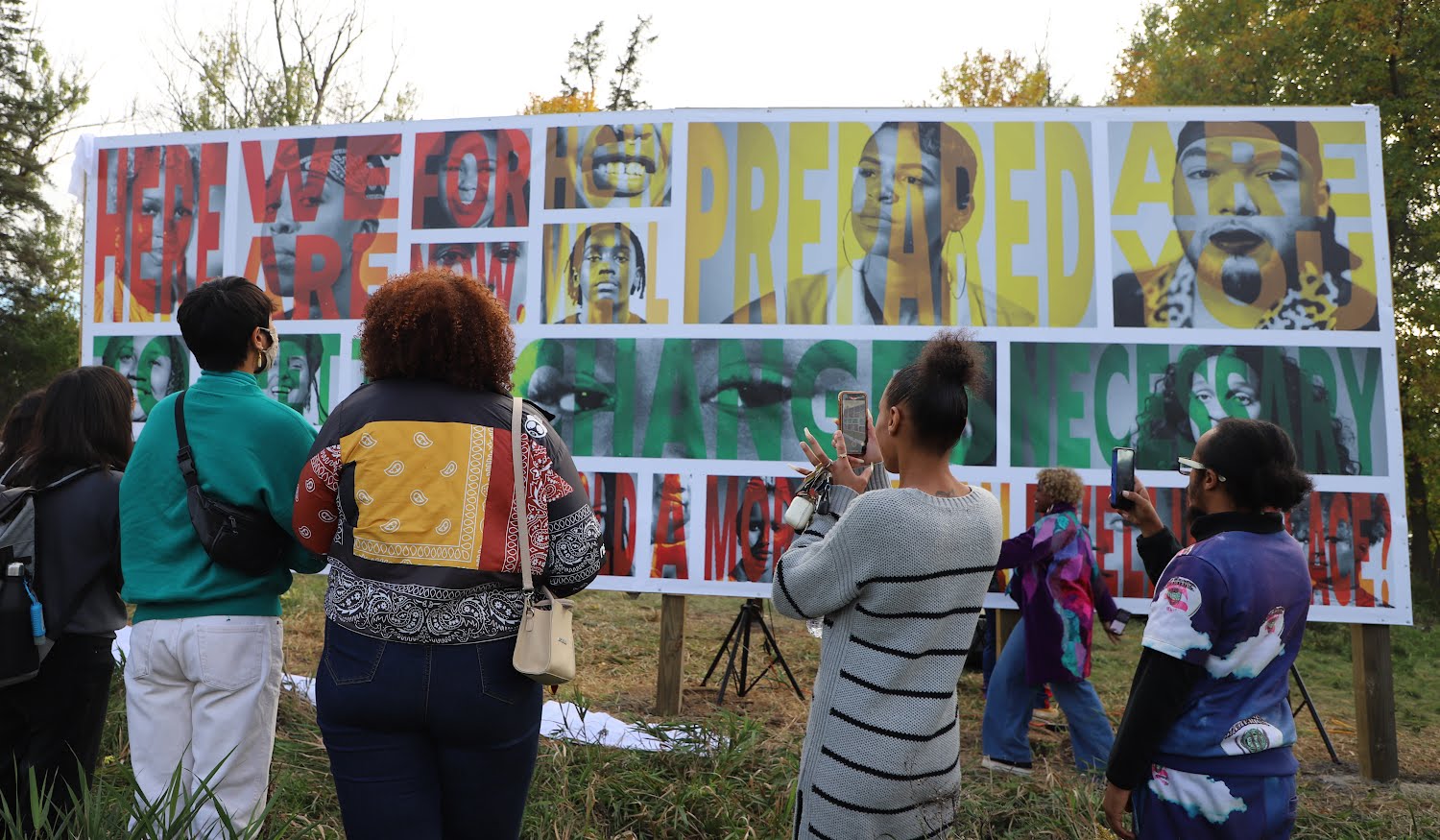 The crowd at the unveiling celebration for Authority and Visibility. Photo courtesy of the artist.

Yasmeenah describes the process of creating Authority and Visibility in conceptual and logistical terms: “At first, I really thought about the terrible, oppressive forces on Black folks in the Twin Cities. But I also thought about the same powerful young folks who make things happen everyday. I wanted people to see these Black faces in rural Minnesota. I knew I wanted a yearbook aesthetic, so I picked people with an impact in their communities in unique ways.”

The portraits that fill Yasmeenah’s billboard are of local young authors, neighborhood caretakers, queer tech music trailblazers and organizers, documentarians, and more. At its core, the piece is radiant, bustling, and made for all —something like the morning music video countdowns of VH1. Though unlike most billboards, Authority and Visibility sits on the ground. It faces outward, towards traffic, as cars decide whether or not to keep straight or change their destinations entirely. And without a need to tower over drivers or land, Authority and Visibility is grand in its demands and dreams to anyone in passing. ◼︎ 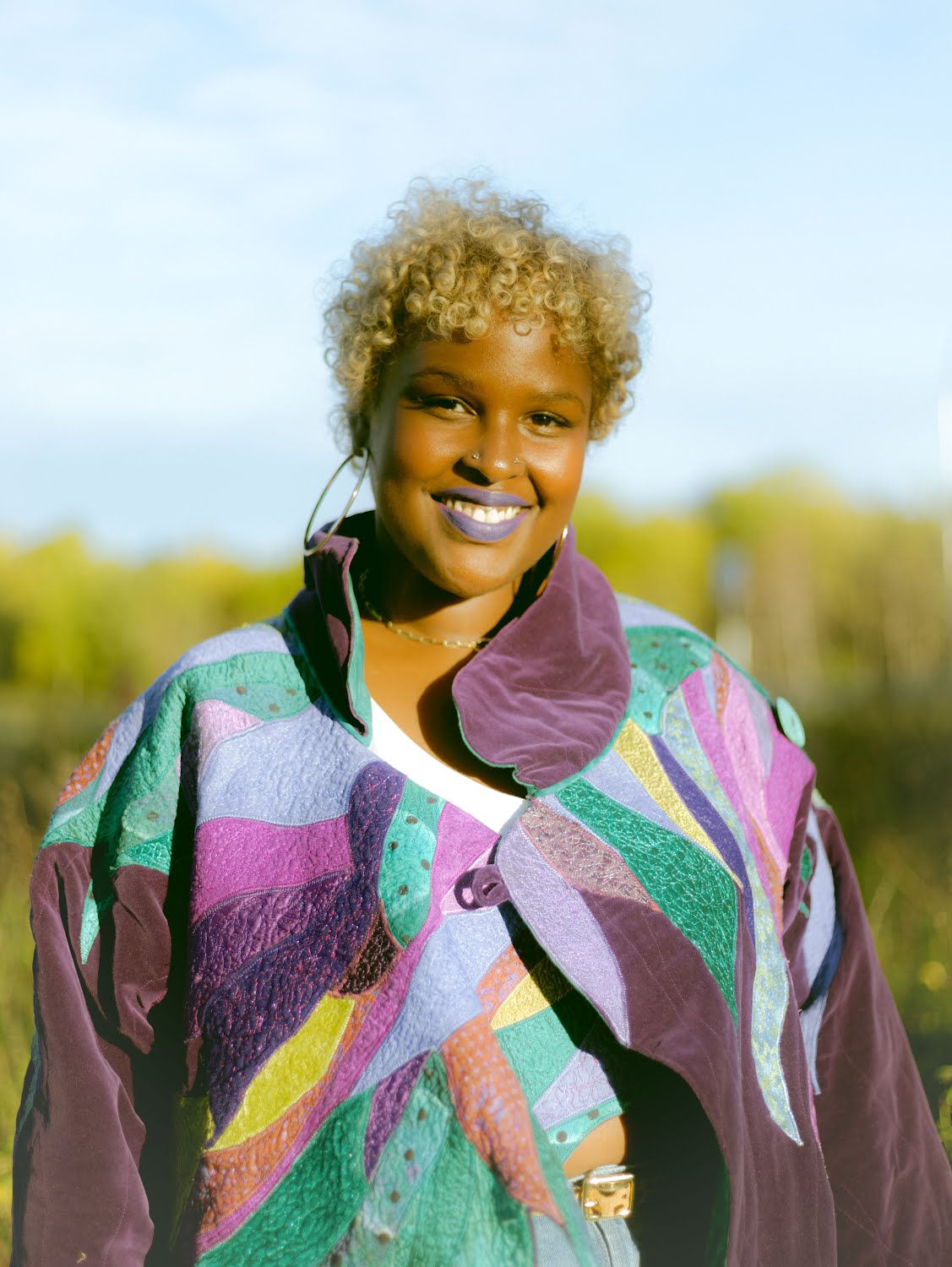 Yasmeenah Sideak-Jama  at the unveiling celebration for Authority and Visibility. Photo by @bearboiphoto, courtesy of the artist.

Authority and Visibility is on view now at Franconia Sculpture Park in Shafer, MN. It's always well worth a visit.