Reggie LeFlore Never Paints Alone (Even When He Does)

Fresh off two gigantic murals in Minneapolis and Bloomington, the artist reflects on the power of people, color, and what a wall can mean to a city

This article is sponsored by

Reggie LeFlore describes his ventures through visual art in mythic proportions. It’s a tendency that makes a great deal of sense coming from an aerosol muralist who shares, with delight, that his best work is guided by storytelling.

You may not recognize his name, but if you spend any time in Minneapolis, you certainly recognize his murals. Bright, bold colors; lavish stenciled faces; raised fists and charming rattle cans — all signed with his tag (and IG handle) RAL86. LeFlore delineates his inclination for portraiture as ultimately an adoration and reverence for peoples’ stories. In the endeavor of painting his subjects, he takes on learning them first, creating alongside them. “Really, collaboration did nothing but to amplify this love for portrait work,” he explains. “Because now I can tell you in as many details as you'd like what you want to know about them. Where they came from, who they are now…”

Born and raised in Omaha, Nebraska, LeFlore paints a picture of his childhood by way of the media he consumed. “I was listening to rock, hip hop, trance, breakbeats, drum and bass, and I also read and watched a ton of comic books, cartoons, anime, and mangas,” he says, sharing a laundry list of genres and outlets. But of all his influences, it was the public and visual expressions of art throughout hip-hop culture that stuck. “Street art specifically. It wasn't present as much in Nebraska, but it was all over music videos on TV”.

As the culture peaked, so too did LeFlore’s interest. It was after he graduated from Benson High School in 2004 that he began pursuing a degree in Media Arts, writing his own stories and developing characters along the way. While his original intrigue in illustration and cartooning eventually waned, an illustrative technique and style still perseveres in his work. Explaining his approach, he says, “I was carrying over vectors and vexel techniques from graphic design to be able to make tonal values for my stencils. Which helped me approach [spray painting] with a technical lens.”

Of course, inundated in the history of hip-hop was the need to make one’s self, one’s story, and one’s name known. Graffiti artists of the day did so on any surface necessary. LeFlore credits these visual pioneers for sparking his love for the art form and lauds them by name.

“Cornbread, the dudes from Tats Cru, T-Kid… It was crazy. Seeing what these people were able to do with very limited resources. That's what got me into it… One of the most profound things I've learned about public and street art is that it’s a vessel to improve people's daily lives... Blank wall spaces, deteriorating buildings. Painting enters those public spaces.” 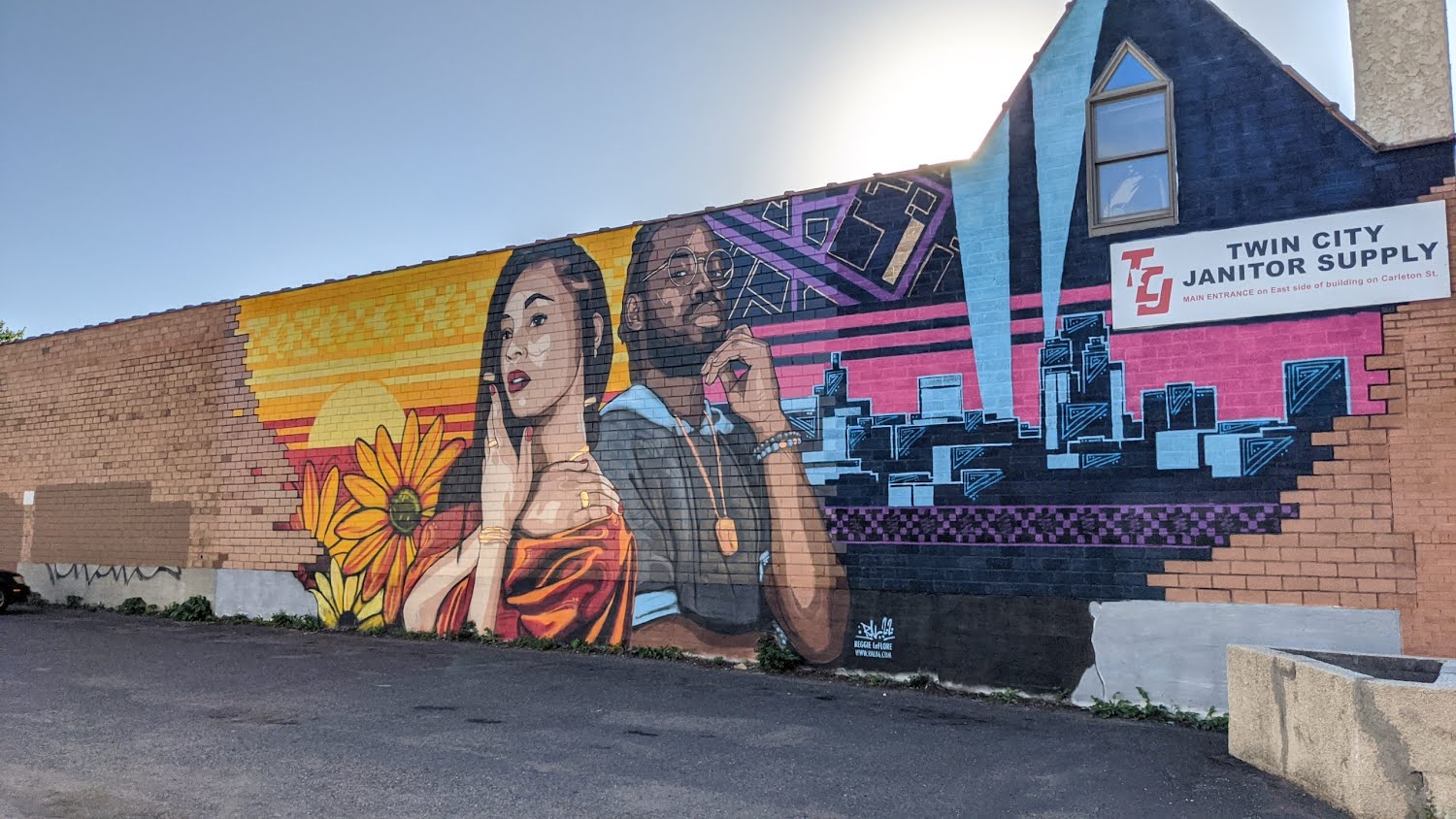 The Afrocentric Spectrum, mural along University Avenue in Saint Paul. Photo courtesy of the artist's website.

After making his way to Minneapolis in 2016, LeFlore recounts taking on the Made Here, a project by Hennepin Theatre Trust, in which artists filled up downtown storefront windows with their creations. Whether subconscious or intentional, Made Here was the perfect vehicle for LeFlore to put his influence from street art and graffiti into practice. “Lots of buildings weren’t at capacity, so our art was a way to activate that space.”

Today, LeFlore’s work takes on exponentially larger canvases. He goes into detail about having just completed a colossal multi-story public mural powered by Hennepin Theatre Trust and The X Games along First Avenue downtown. The work itself depicts the combined portraits of five young skaters. They gaze up in all directions, effervescent in their color scheme. The city’s skyline traces behind them.

Though as with any project of this proportion, it wasn’t without its tribulations. “There were challenges in the beginning with the timeline and trying to take on an image of this magnitude in just a few months,” he says. “Your work can get lost if you don't have any special sense of direction. Storytelling gives it that direction, and people help with that story… There were connections we needed to make to be able to feel comfortable depicting kids in the Twin Cities.” It wasn’t until connecting with the local skate shop 3rd Lair and having a chance to sit down with owner Mark Rodriguez and some of their most dedicated skaters that the mural’s imagery really came into focus. 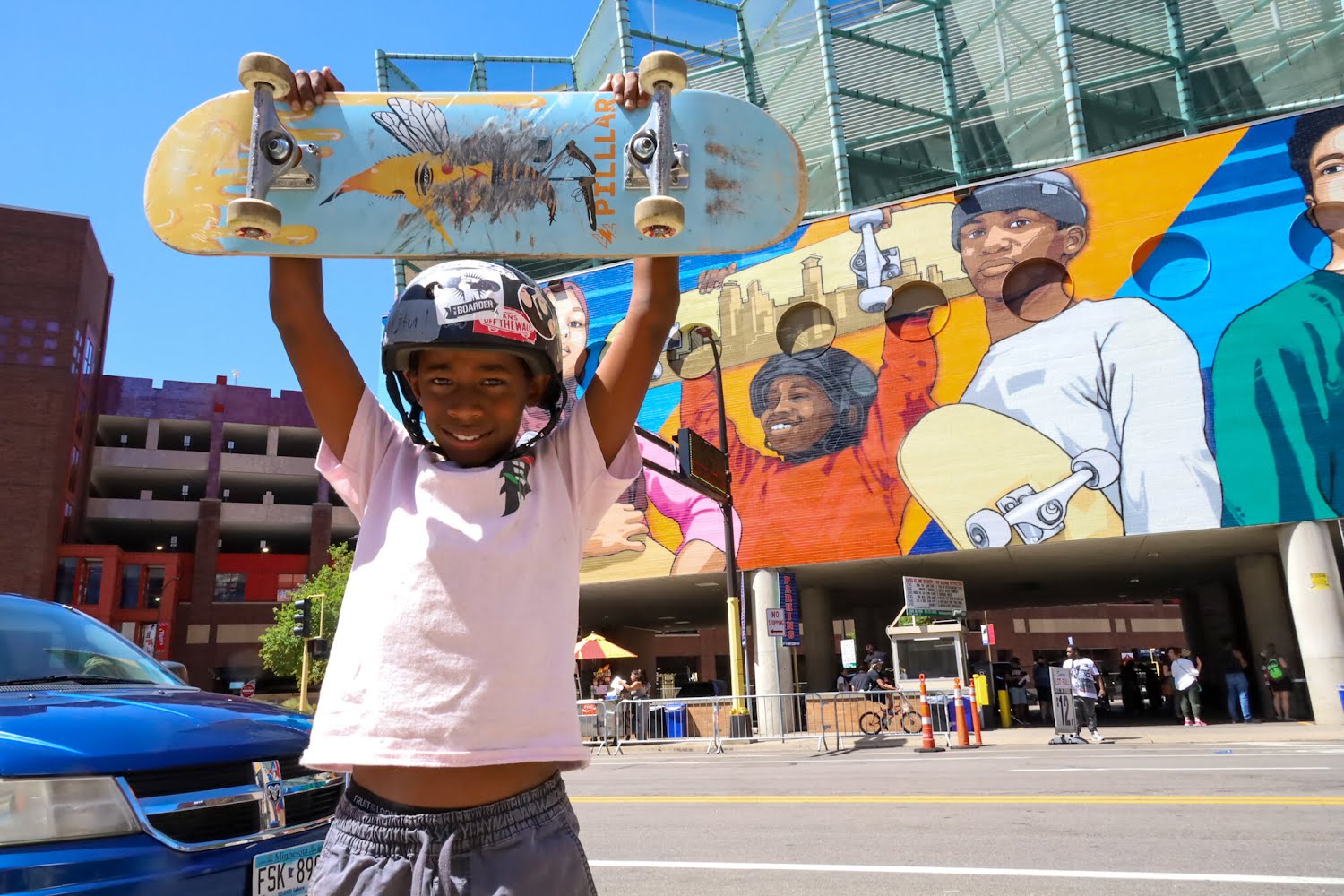 Mengistu, one of LeFlore's collaborators from 3rd Lair Skatepark & Skateshop, celebrates the mural's completion at the X Games Mural Celebration this past August. Photo courtesy of Hennepin Theatre Trust.

Dale Stark, Manager of Public Relations at Hennepin Theatre Trust echoes the necessity for and presence of utter intention behind LeFlore’s multi-story work, comparing it to developing theater productions. “Picking an artist, picking a theme, it all clicks when you start to see the likeness [murals] have to any show. It’s always more than just color on a backdrop. That’s what got me excited about it.”

“It was really about a way that we could show the positivity of young skaters of color,” Stark continues. “They’re the future, the next generation of leaders, our future voices. We wanted to honor the impact that these youth have on downtown… With construction and the pandemic, the city’s center was a ghost town. Now, with people returning, we hope that they return with a new perspective and realization that downtown” — much like the city itself — “is simply not what it used to be.”

Even outside of the vastness of LeFlore’s downtown skate mural, it’s clear that the artist has a propensity for projects that span space and time. Just this past summer LeFlore was selected by the City of Bloomington and the Ua Si Creative to collaborate on the creation of one of Minnesota’s longest murals. The 750-foot-long work envisions the South Loop of Bloomington’s “past, present, and future,” featuring art by LeFlore, Marlena Myles, Martzia Thometz, Xee Reiter, Andrés Guzmán, and Tom Jay and Thomasina Topbear of the City Mischief Murals collective.

As he continues his practice, Reggie anticipates a hunkering down on public art informed by narrative. He speaks with a concentrated giddiness about a mural-based graphic novel that could one day sprawl across the city’s public spaces. With characters in development and a storyline inspired by his long-standing love for comic books, it’s an epic worth watching vacant walls for. ◼︎ 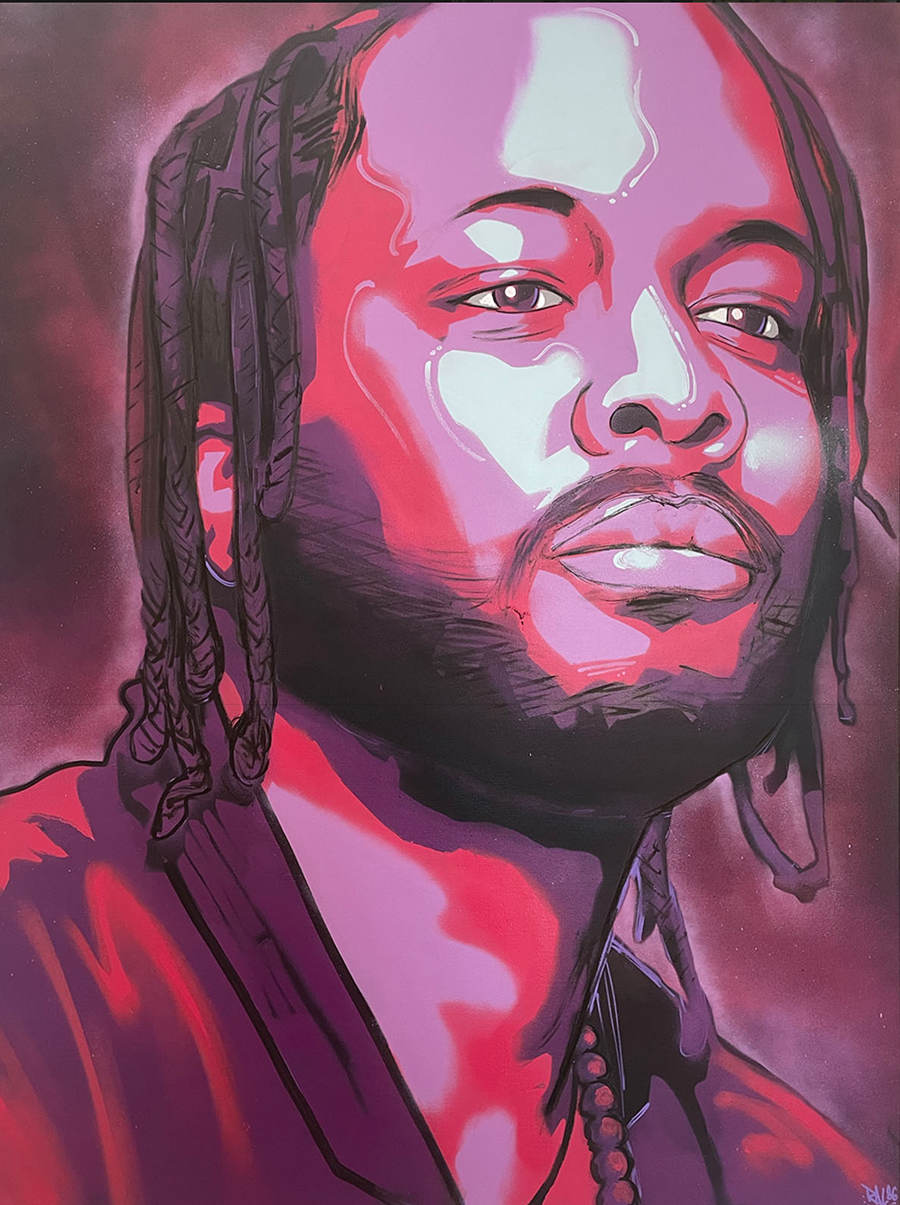 Self-portrait from the artist's recent solo exhibition, Laying the Groundwork, at Gamut Gallery May-June 2021. Image courtesy of the artist's website.

To see more of LeFlore's work, check out his website or follow him on Instagram. His mural for Hennepin Theatre Trust is located at 714 1st Ave N, across from First Avenue. The Ua Si Creative mural is located on 30th Ave S between Lindau and American Blvd. in Bloomington.