Wise, Gifted, and Black: A Group of Women Forge Community and Artistry in the Heart of Rondo

Now on view in The M's window display, the show of collages celebrates Black history, Black culture, and the power of making art

On what seemed to be another impossibly warm summer day, I was welcomed into the conference room of the Minnesota Museum of American Art (The M). A handful of ladies — and what were made out to be their friends and children — reclined around a hollow rectangle of tables and chairs. Hastily labeled white takeout containers laid strewn across the table tops in satisfied completion, red and white picnic pattern wax paper sticking its tongue out of the sides. The attendees, most notably the members of the Rondo-based Hallie Q. Brown Community Center (HQB) senior women’s group, donned pastel blouses and caps. I met them cackling and smiling at a short documentary projected onto the wall. The video, it turns out, was of themselves. Particularly, its purpose was to enumerate how the artists at present arrived to this moment of celebratory relaxation. It was about their journey in, through, to, and over art.

Aptly named The Magnificent Golden Agers, this group of women gathered to celebrate the completion of literary and visual arts projects spanning the past year — pandemic included.

The teachers of this group of magnificent agers, Nicole M. Smith and Lawrence El Grecco Waddell, take turns admitting that they learned far more from these women than could ever be taught. They delve into the project's inspiring texts and materials, one of them being A Choice of Weapons by Minnesota photographer Gordon Parks. Smith tells me, “As the pandemic came on, of course we had to shift gears… We sent every member an art kit equipped with portable DVDs, books, cameras, journals, etc... It just had to be interdisciplinary… Because that’s what art can look like. That’s what art is.” 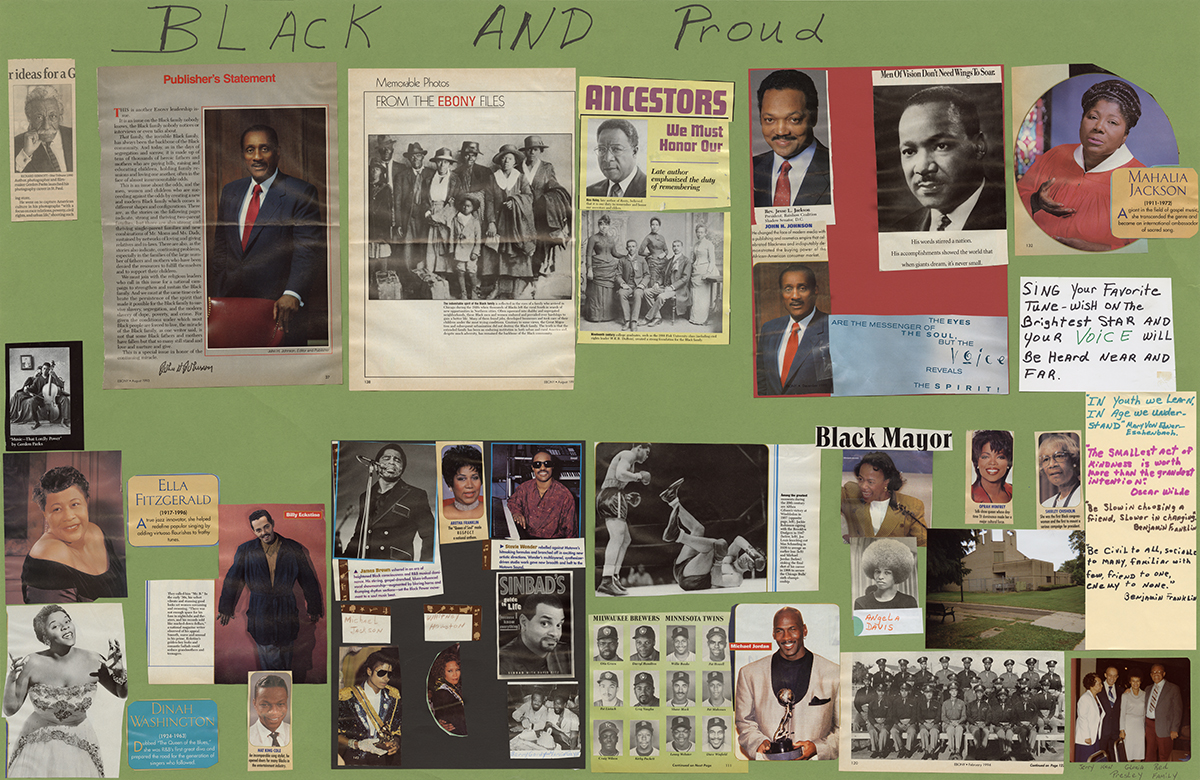 Smith and Waddell recount some early reluctance by the ladies to think of themselves as artists. For Smith, the task of convincing these women of their artistry stems from her own negotiations with what it means to be one.

“Being a vision-impaired artist, there is this synchronicity that has come into my being, a relatability with those that are deemed marginalized or 'throw aways' by society. So it gives me a deep purpose and fuel to do work in this way with my community. Like yo, let’s love us up!”

It was abundantly clear to me at the unveiling event of their newest exhibition of collages, Wise, Gifted, and Black, that the stories tossed across the tables in The M’s community room were the result of an arrival at some creative epiphany.

One Golden Ager, by the name of Shirley Barber, reflected when asked what she’d learned. “I’ve learned to pay attention to the little details. The trees outside, the leaves on them, blowing. But how often do you think about what makes them move? How often do we consider the wind?”

She takes her time with the words — as though relaying a live account of her imagination in that moment — and they swell with lyricism. “I pay attention more to life. The clouds, for instance. I look at it [all] in a different way… The unseen forces of life, the kind artists tend to and keep close.”

Eventually, the group makes its way out into the sauntering breeze of Barber’s words on the downtown streets of St. Paul. We turn the corner to see for ourselves the culmination of visual works by Ruth Wilson, Gloria Massey, Shirley Barber, Janette Gray, and Bettye Jackson.

In front of her collage, Gloria Massey shares that she’s a lifelong member of the HQB and the Rondo neighborhood. Though she didn’t always think of herself as an artist, Massey has “so many memories of art.” Most of which came from her time at community centers as a child. In fact, she only really left Rondo once to try her hand at creating a life in Milwaukee, but admittedly, Ms. Massey shares, “Home is home.” She adds that it’s actually the anniversary of her return to Rondo — it’s been 47 years since that day. Titled Black and Proud, Massey’s work lines up the gazes of iconic Black figures with the viewer’s. Quotes are reconsidered in marker, pencil, and text, reinvigorated as they sit near the grins and gazes of the “greats.” Massey’s collage reads boisterous and meticulous. Words pulled from articles and profiles emerge as stepping stones around the collage’s paperscape, “Ancestors…Mahalia…Black Mayor…. Ella.” 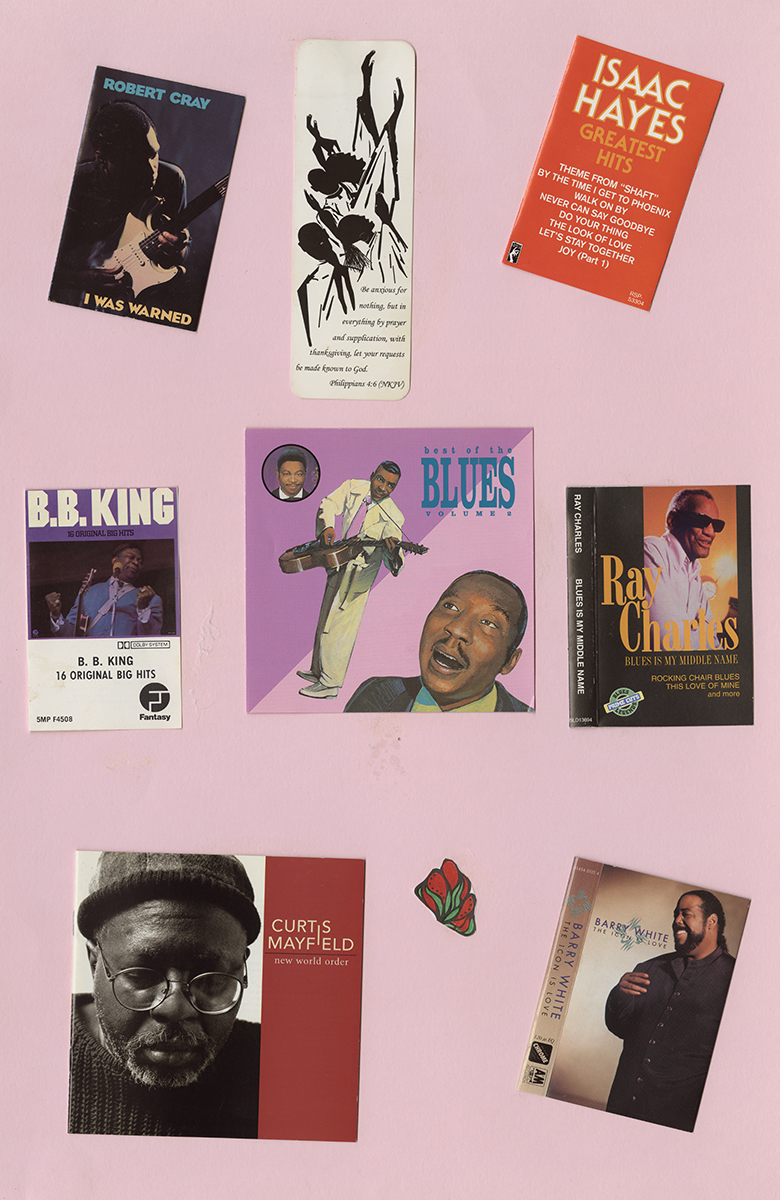 Bettye Jackson, on the other hand, remembers with some sweetness that she never intended to make a home out of Rondo. “I came to not stay… I came up [here] from Arkansas to babysit my sister's daughter,” she tells me. “That was in 1960.”

When I ask about creativity in her life, Jackson recalls art in all of her most durable routines. “Actually, I would paint for fun sometimes… and I used to love to cook. Truthfully, cooking is like art.”

With pride, she shares the memory of the first cake she made, along with the quintessential fact that it was baked using a wood-burning stove. These sweets of yore were feats accomplished at the helm of apprenticeship, Jackson explains. “My mother would tell me ‘Clean your dirty clothes off, sit in the chair, and watch me’... There was no measuring cup in those days, just a coffee cup. So yeah, that took some skill.”

Jackson goes on to list the names of her favored desserts: apple stack cakes, cream-filled caramel cakes, and coconut-layered cakes. The room stirs with aroma at the spell of each recipe. In a beautiful sort of correspondence, Bettye Jackson’s collage is simple and evocative with a background the hue of plush saffron. Within the visual work, sweating cooks contemplate a meal while cut-outs of produce and steaming dishes float ephemerally as their frame. 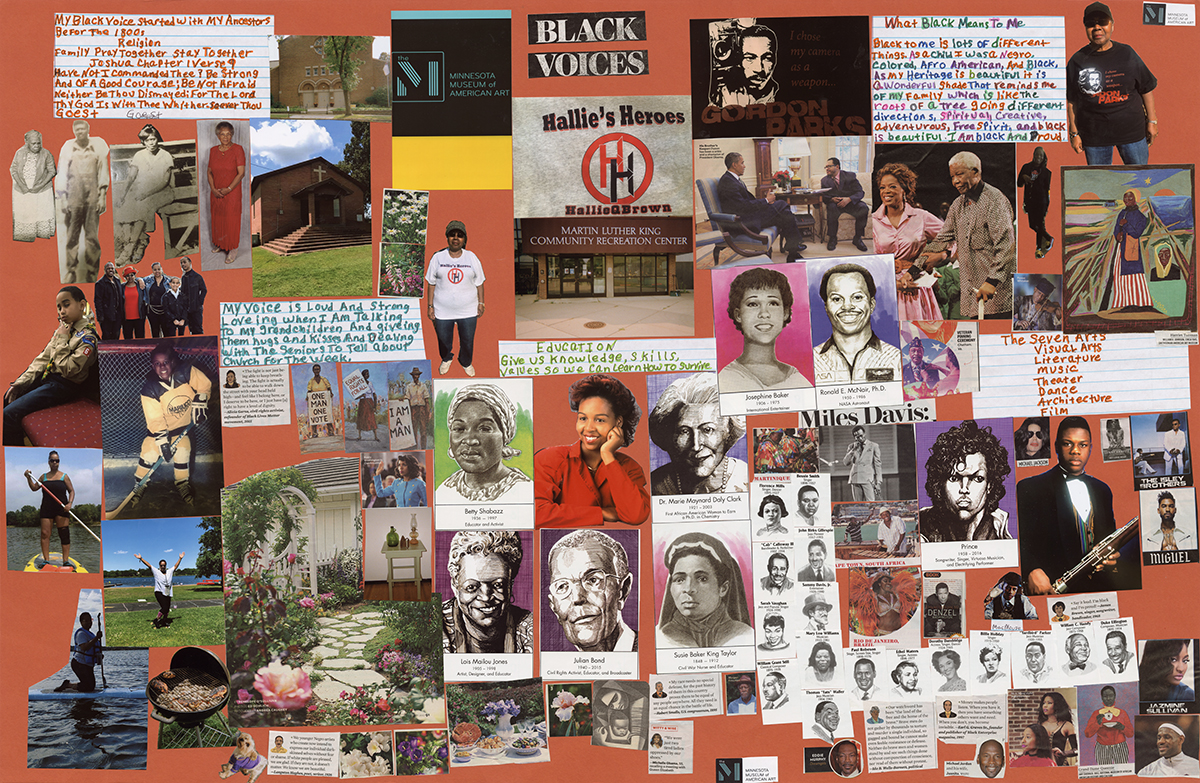 The women of Hallie Q. Brown’s Magnificent Golden Agers may have started from many a geographic place — citing cities from North to South — but what becomes clear to me is the significance of where they are now. In the neighborhood of Rondo, U.S.A. Were I not taken back to stories of my own grandmother’s childhood in Rondo, I would still feel at home and at joy with these women.

I retrace in Gloria’s words the map of my own great grandfather's barber shop that existed mythically somewhere on Selby Street. It was named The Head Hunters after their family, the Hunters, in a dousing of wit that prances through all the conversations I still have with my grandmother today.

I think about the serendipity of Wise, Gifted and Black being held at The M, an institution I was first introduced to in the summer of 2020 on a panel. I took my opportunities then to speak and spent them on abolition. I think about how my grandparents guided me through these tenets, whether they were conscious of it or not, by always putting community first.

Lastly, I think back to the personally foundational abolitionist poem by Junauda Petrus, conveniently titled, "Give the Police Departments to the Grandmothers." I think about the fact that indeed, these are the grandmas, friends, and lovers. That they’re here now, fashioning fiction, remembrance, and beauty for anyone to see. Because even in impossible weather, The Golden Agers ensure that whenever art is the task, storytelling and community are, too, crafted. Magnificently.  ◼︎ 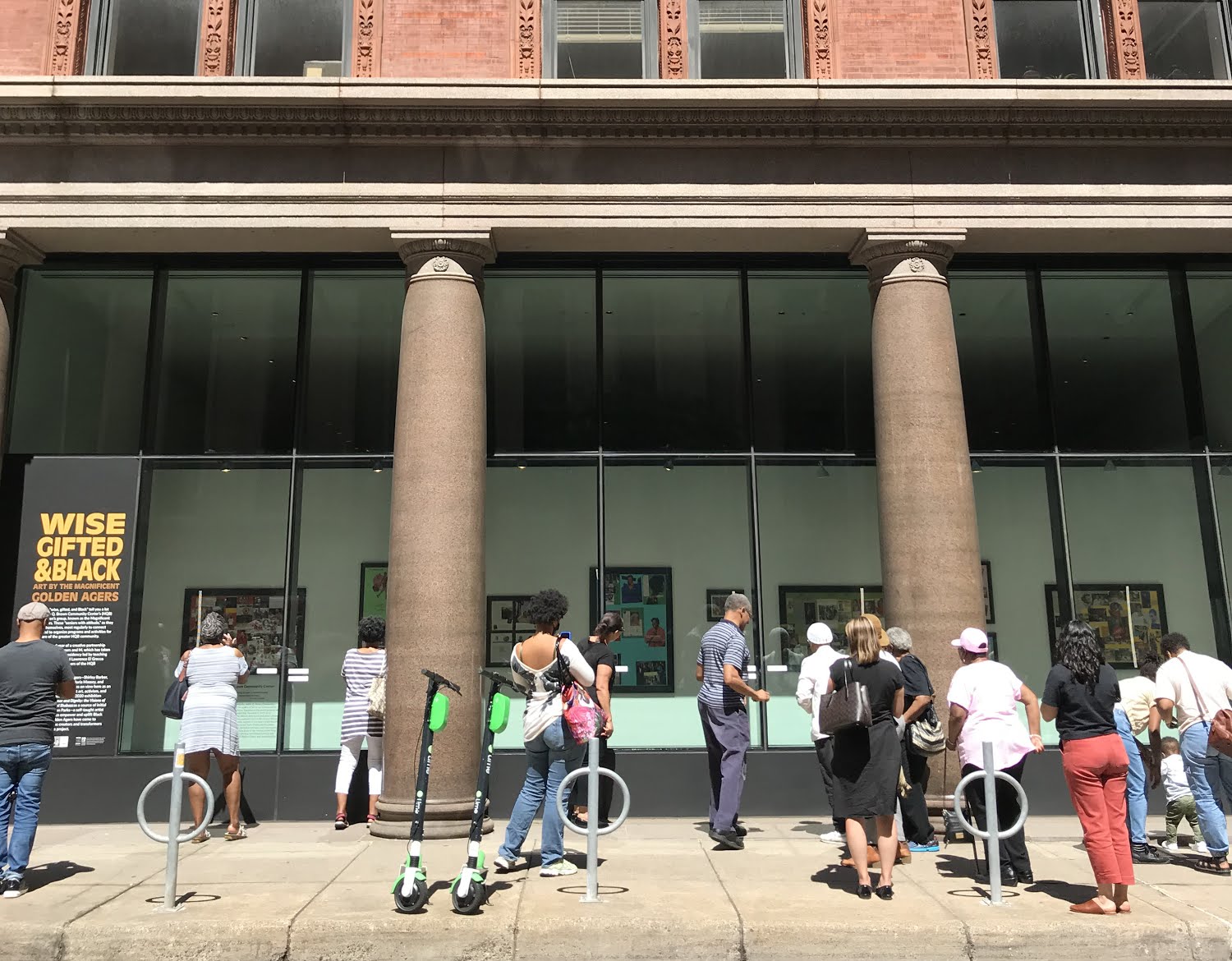 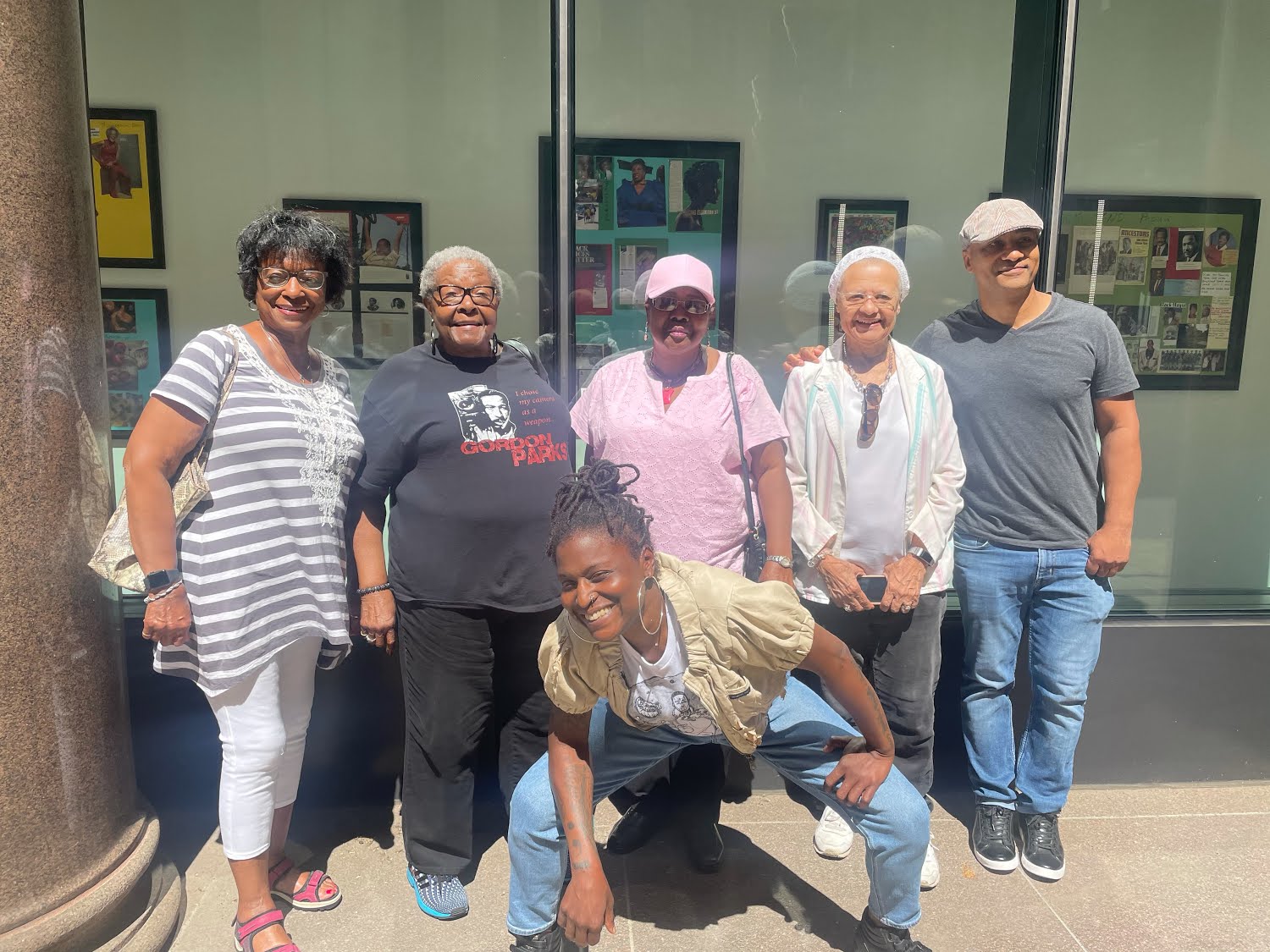 Wise, Gifted, and Black will be on view at The M through July 17th. The show is installed in their window display at 350 Robert St. N in Saint Paul. For more info, visit https://mmaa.org/wisegiftedandblack/

Special thanks to Nancy Ariza, The M's Associate Curator of Learning and Engagement.