The sculptor's MAEP show, on view through June 26th, celebrates the resilience of bodies and community with a dark, loving humor

Have you ever visited a zoo on a hot, dull day? The animals are lazing about in their enclosures: a pride of lions lounges in the shade; an elephant lumbers lethargically across the dirt. A rhinoceros lays flopped on its side in the mud, flapping flies away from its haunches with a gray whip of a tail. You may pity them their captivity or begrudge them their mundane performance, but they don’t care. They are unperturbed by your presence, bored as much by you as you are by them.

Step inside the pen, however, and the energy shifts. That’s the vibe right now at the Minneapolis Institute of Art, where Nicole Havekost’s monumental fabric creatures have taken over the U.S. Bank Gallery. There are eight of them, although it feels like more: large, lumpy figures — pear-shaped bodies with tubular limbs and impossibly long necks, sitting and sprawling and intertwining with each other on the gallery floor. Their skin is a hand-sewn patchwork of beige linen scrapped together with red stitching. Their wrists and necks terminate as flat caps: no heads, no hands, no feet. But still, they don’t seem to mind. There may well have been violence committed, but any wounds have long since healed over. You walk among them, around them, sometimes underneath them, aware immediately that this is their space. Not because these monsters are aggressive or dangerous, but because they’re at ease in the space, at ease with each other and with you in their midst. It feels like a family.

“These are my ladyfriends,” Havekost tells me. The sculptures are inspired, she says, by “the ladies I know of a certain age… They’re taking up space and not apologizing for it.”

Before you get to them, however, you are greeted first by a large wall riddled with oversized, ruddy-colored pustules. It’s acne on a macro scale, like some infestation of alien eggs, or barnacles growing on the bottom of a ship. Constructed out of paper sewing patterns, the sculptures immediately communicate a sense of organic menace, calling to mind the work of Eva Hesse, Lee Bontecou, and Louise Bourgeois. Interspersed among the mountain range of volcanic, puckered holes are tufts of loose thread, sticking out like so much untamed body hair. 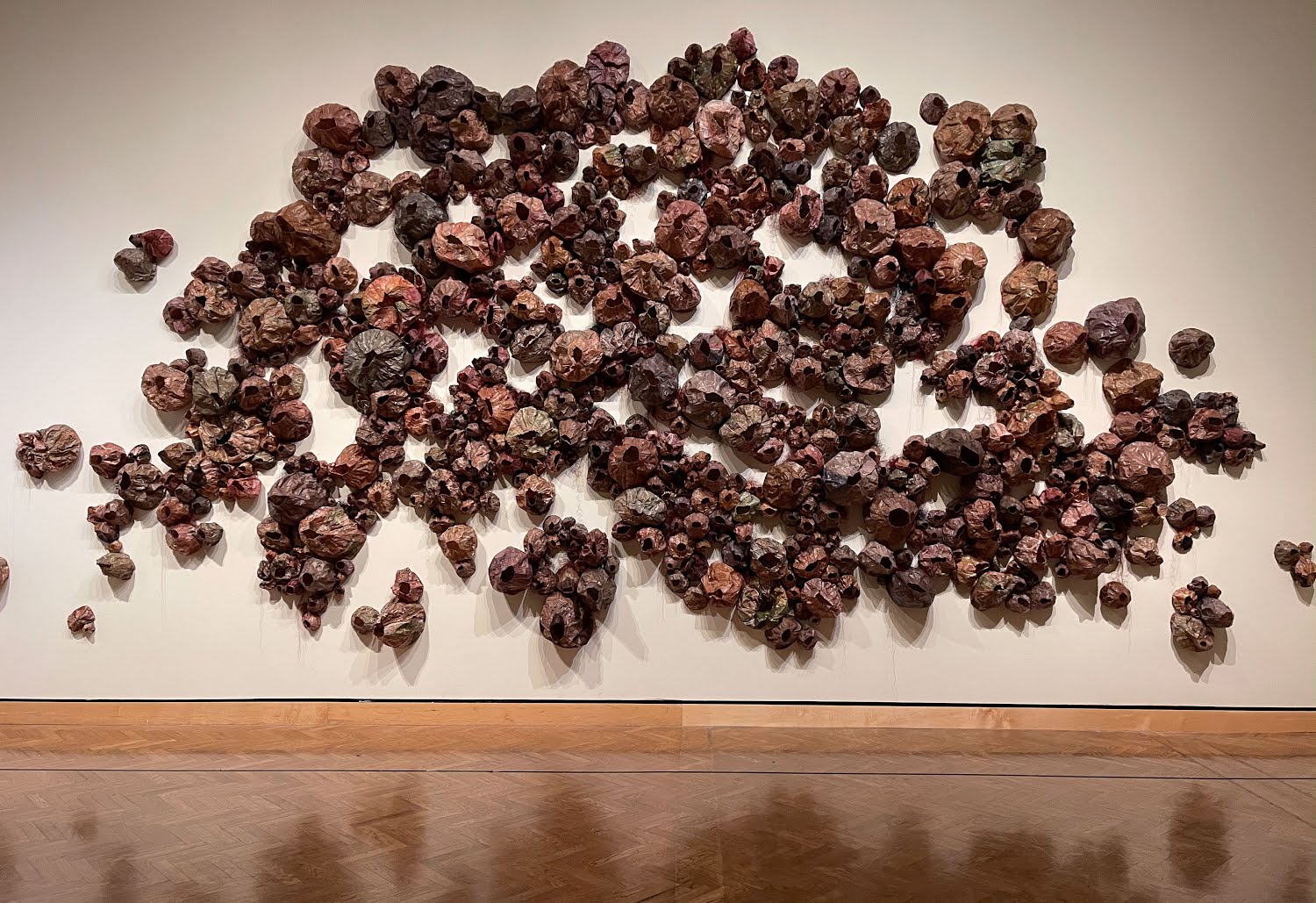 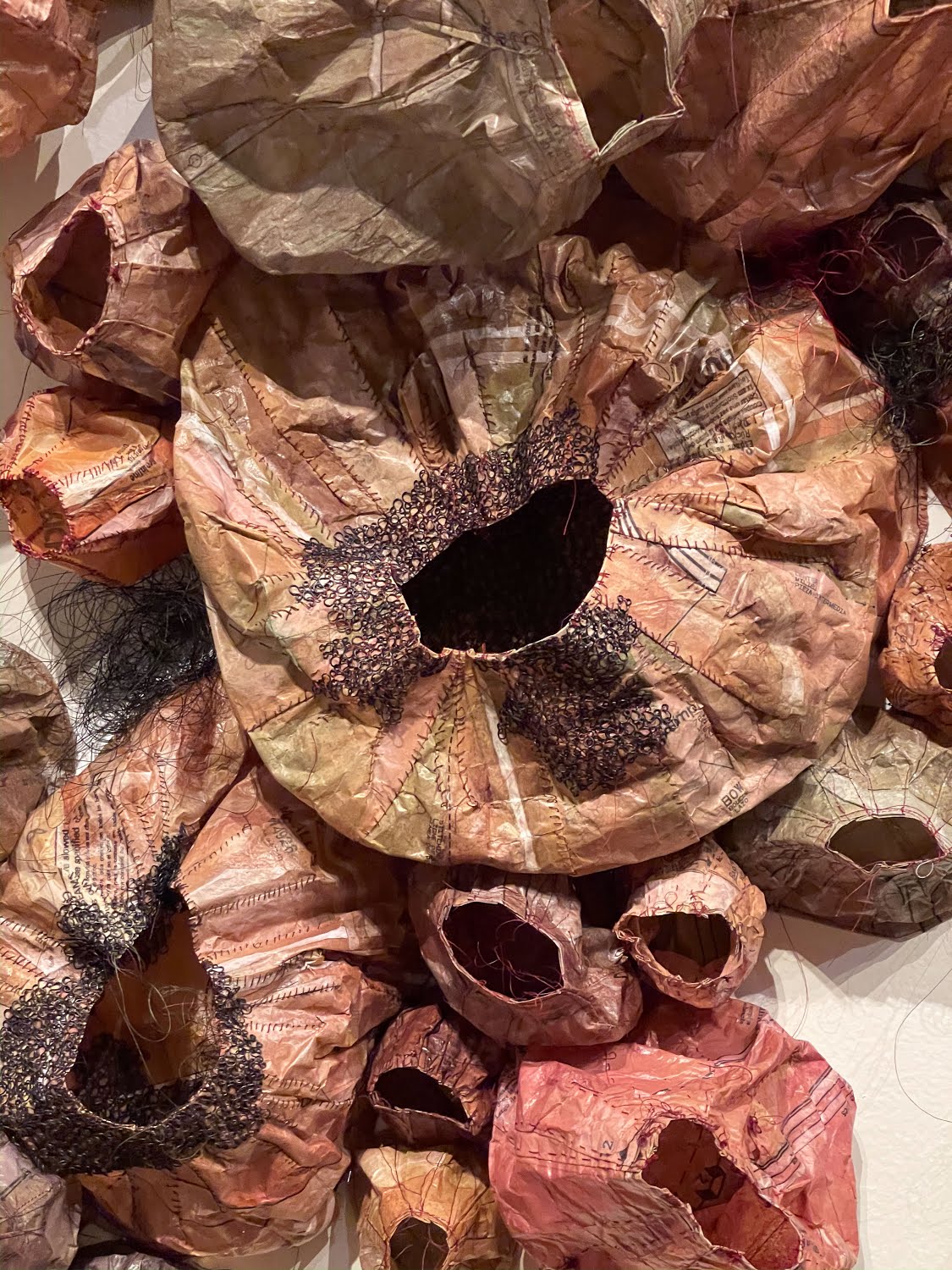 The show’s title, Chthonic, references the unseen, the subterranean, the underbelly. Up close, the printed instructions of the sewing patterns show through the fleshy tones of the polyps, hinting at the structural nature of hidden labor — much of it performed by women — that undergirds so much of our polite society. Here, one explicit target is fashion, an industry that hides a multitude of sins, from the work done in factories across the world to the bodily blemishes that Havekost is airing on full display.

No surprise then, that the gentle giantesses in the larger gallery space aren’t wearing a stitch. It’s all “pits, tits, crotches, and asses,” Havekost says with a laugh. Moving through the doorway, you pass directly under one of the ladies, her arms and neck pushing against and disappearing into the wall above, almost as though she’s holding the wall itself up. Her body is a roadmap of seams and darts, whipstitches standing in for scars and stretchmarks. Small black eyehooks — the kind you’d find on a pair of dress slacks — swarm out of her armpits like a mass of ants, and her bosom, belly, and buttocks bulge with stuffing. Viewed from behind (and below), her lumpy backside stands as a striking rejoinder to Le Violin d’Ingres, Man Ray’s famous photograph of a woman’s bare back perfectly painted with the stylized Fs of a classical instrument. These objects reject objectification, and as oversized and outlandish as they are, there is a familiarity, a reality, to these bodies.

“I spent a whole lot of time in my life in opposition to my body, which doesn’t do you any good,” says Havekost. “So to finally come around to acceptance of the body and the glory of it and what it can do is a real gift.” 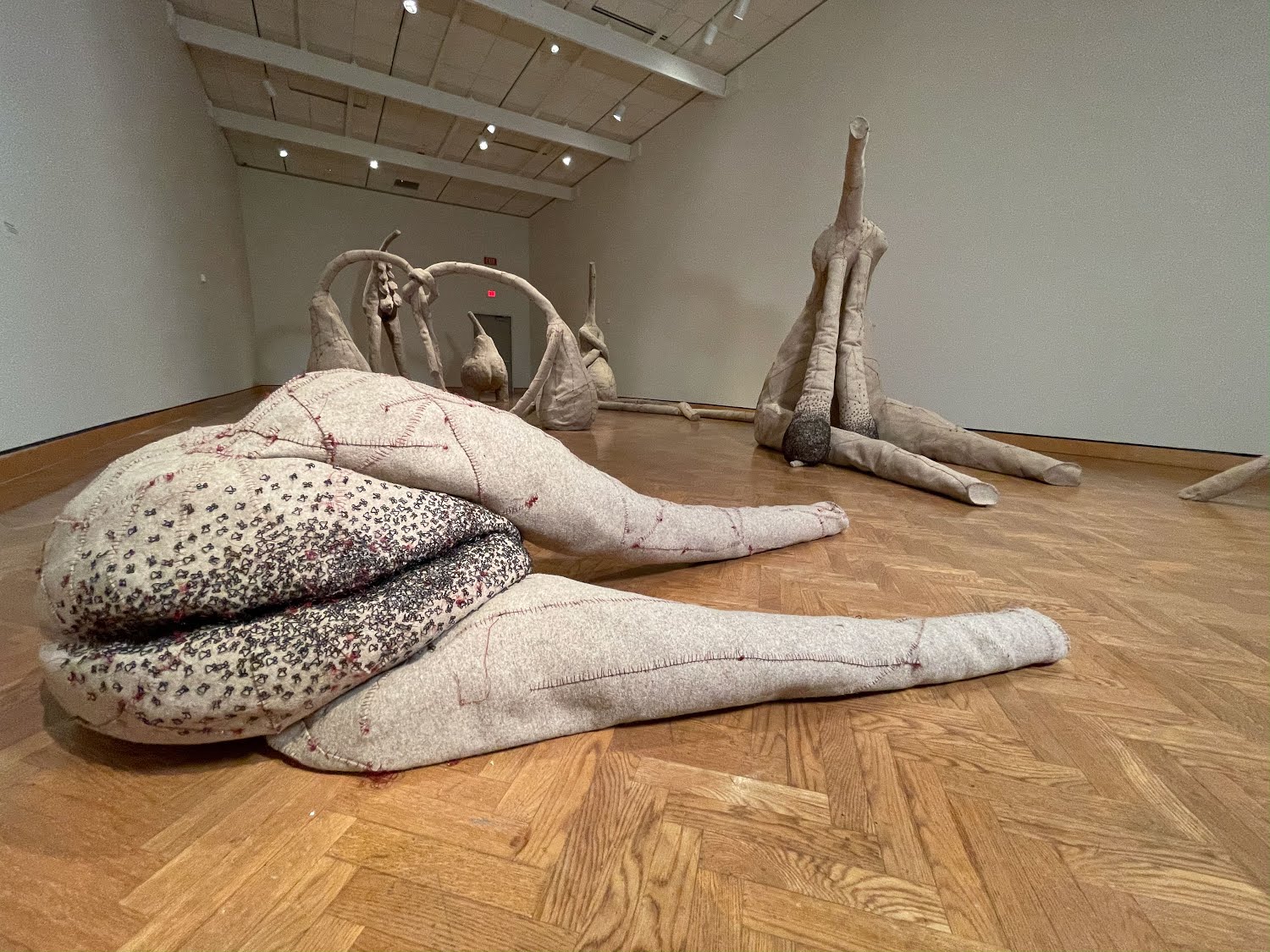 This emphasis on what bodies can do is evident not just in the poses the sculptures hold but in their titles as well, many of them verbs: Settle, Lumber, Sway, Nourish. These are slow verbs, moments of subtle motion brought to life by Havekost’s felt creatures. One stands mid-stride on all fours, her belly drooping towards the ground as her six-foot-long neck stretches out to sniff the floor. Another sits upright and armless, her elongated breasts resting on the ground, covered at the ends in more of the black eyehooks as though insects are swarming around her fat, felt nipples. The same infestation crawls out of the long crack of another sculpture’s rear end as it lays splayed across the floor like that rhino at the zoo, lazily swatting away flies. You almost expect to see the artwork breathing.

The others — what’s the right word for them? Are they humans? Are they creatures? They’re closer to rag dolls really, but still they have an energy about them, an engagement. The installation is no mere diorama. The rest of them act out other moments: one has wrapped itself up in its own arms like a straitjacket; two more are playfully knotted together at the neck; and a final pair face each other directly, a stout child perhaps, peering up at its eight-breasted mother. It’s a family frozen in time, like snapshots from a household, or maybe scenes from a bathhouse. Still though, the gallery feels like an enclosure. The metal door marked EXIT remains unconcealed at the back of the gallery, but they don’t mind this either; none of them could fit through it anyway. Their beige color even matches the gallery walls, and when viewed across the entire space, they’re almost camouflaged in spite of their size. Perhaps another nod to the way we erase the lives and work of women — especially, as the artist noted, those of a certain age. But this installation isn’t exactly a protest or a sit-in. It’s a sitting with. Sitting with our bodies, our burdens, our entanglements, our assumptions, and our infestations. You almost feel invited to sit down with them and take a load off yourself.

On your way back out, leaving the lionesses’ den, you pass the ruddy polyps one more time. Their menace has diminished somewhat, an underbelly’s ugliness relegated to a fact of life by the ladies’ stoic good humor. Strength takes many forms at many scales, and likewise inspires action at many speeds. At a time that demands constant, immediate action (or, more often, reaction), Havekost provides a setting in which rest might be revolutionary. This is not a safe space, per se — we’re well beyond the days of a depoliticized art museum — but these sculptures still make room for self-care and self-love. They are spooky and they are weird, but they are themselves. They stay and they sit, in community with each other, while you head back out into a world defined by isolation and inequity. It’s hard to say which one is stranger. ◼︎ 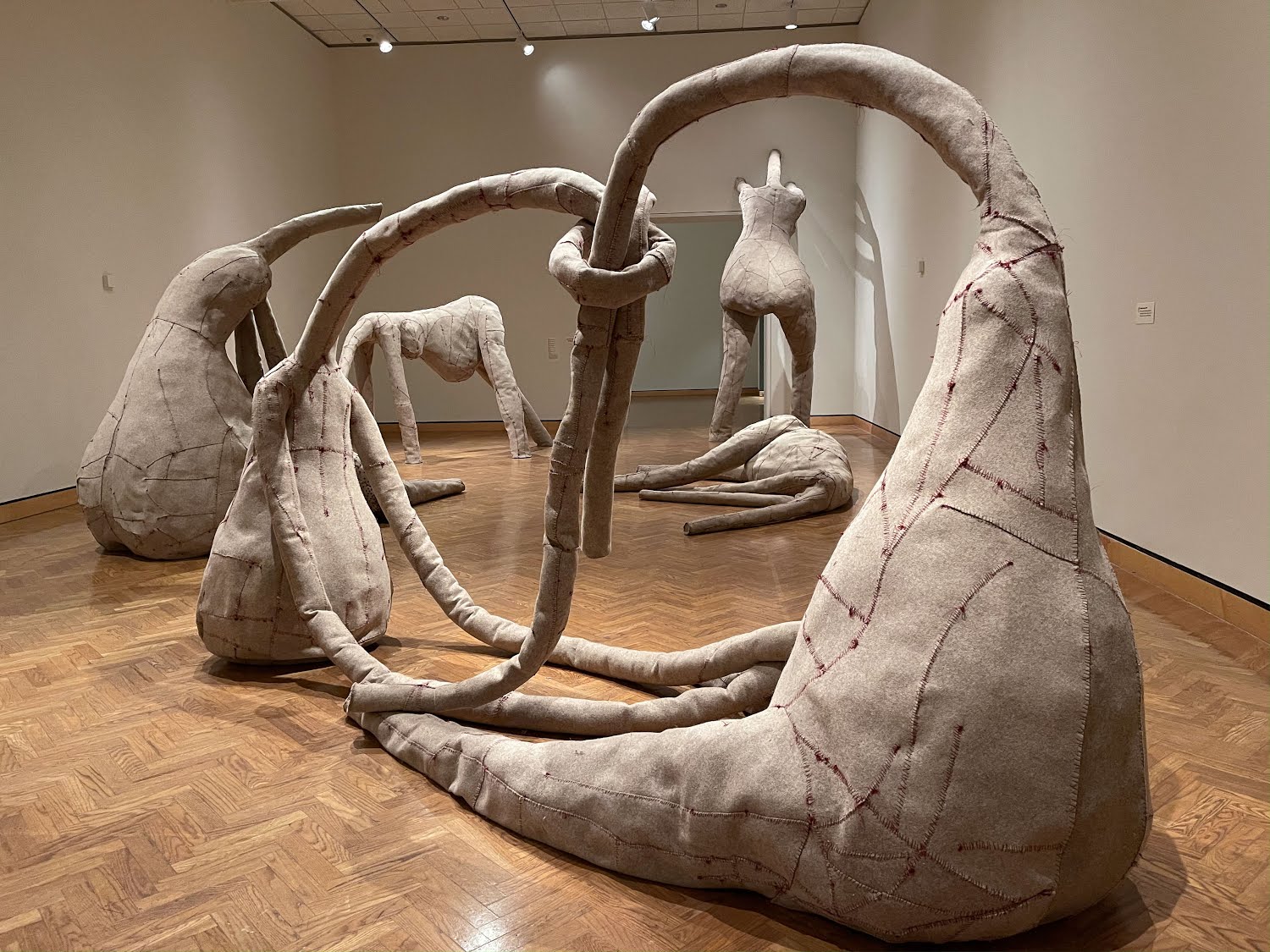 Chthonic is on view in the US Bank Gallery at the Minneapolis Institute of Art through June 26th. Admission is free but ticketed.

All images are courtesy of the Minneapolis Institute of Art.