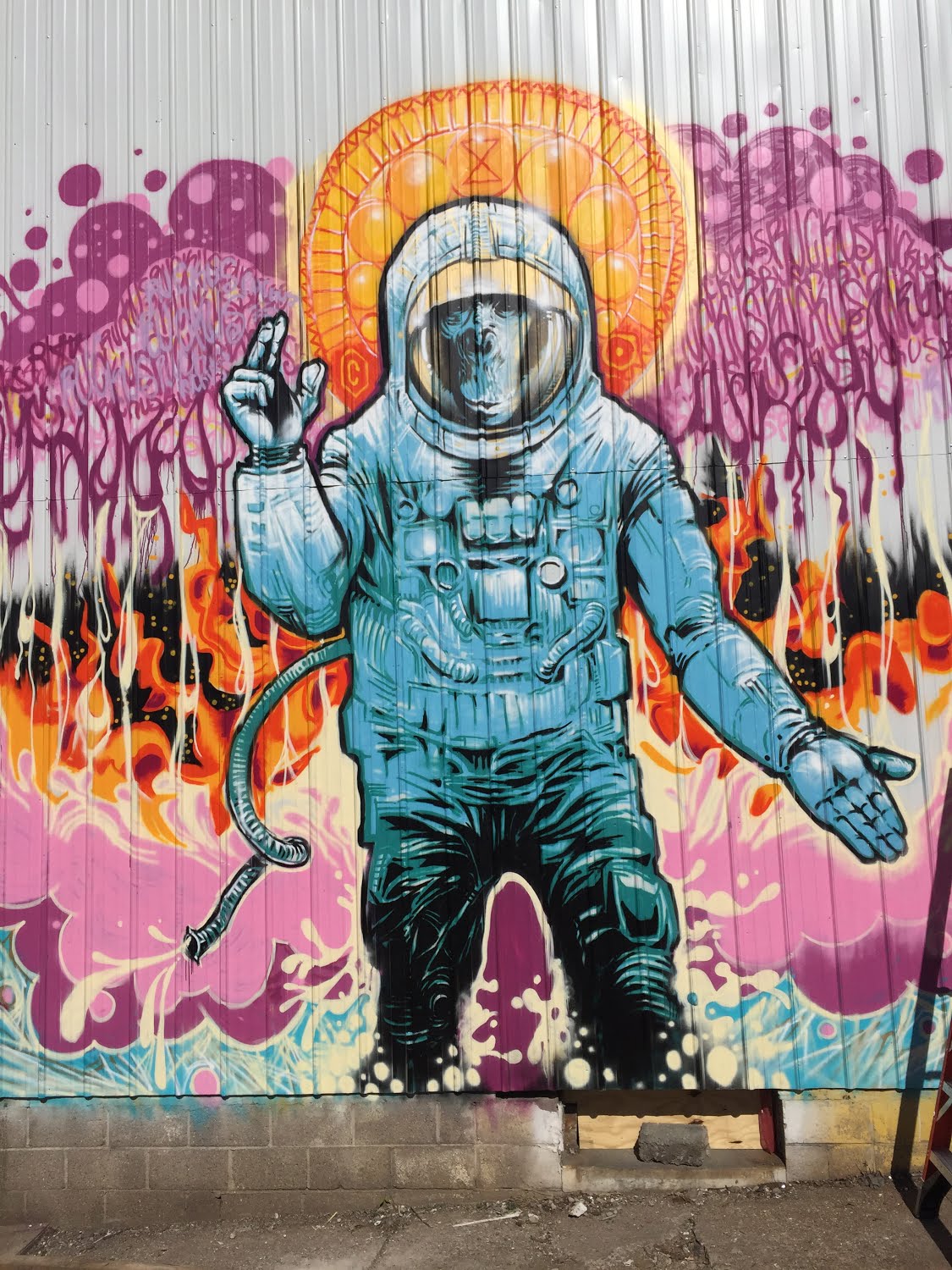 Blaine Garrett: As one of the founding members of Rogue Citizen, can you talk a bit about what the group is and how it got started?

Matt Wells: Rogue Citizen is an art gang that started in Minneapolis when the original four of us were museum security guards in 2009. We were in our 20s and pretty frustrated with not being able to make the work we wanted to, not committing enough time to it. We just needed something to do. So at first it was a lot of scheming and sticker bombing, some sneaking around. We started doing live painting at our friends’ punk and hip hop shows. We won a small cash grant for a recycled materials art project that set us up with a lot of paint and beer. Pretty soon we were getting invited to paint walls, and lined up a string of gallery exhibitions. One of those early ones was "Execute Rogue Citizen" — on the closing night all unsold work was destroyed with an axe.

How has Rogue Citizen changed over the years?

After years of commissions and paid projects the money was getting kind of messy, floating around between personal accounts and sock drawers. Which is a good problem to have, I guess, but we created an LLC and got a bank account. What started out as kind of a weird sideshow became a real part of our careers.
RC works like a band sometimes, we’re working collaboratively on walls, on stage, etc. Or it can work like a record label, like putting our resources into making a solo exhibition happen for one of us. There’s six artists now: Blaster, Dalsen, Goat, MG, Ugaso, and myself. It’s helped us all develop a lot as artists and educators in ways I’m still trying to wrap my head around. I have no clue what I’d be doing right now if Rogue Citizen never happened.

Unions have been a hot topic this year. Rogue Citizen has done a lot of projects supporting labor movements over the years. How did this become an aspect of your work?

As museum guards we were members of SEIU Local 26, and in 2011-12 we started working with the union to create a lot of signage, banners, and graphic design around labor issues locally and nationally. We made materials that were featured in Washington DC during Occupy Wall Street, labor convention murals in Denver, and over the years a ton of illustration work for labor & justice campaigns across the country. We recently got to create a permanent mural on the AFL-CIO labor pavilion at the MN State Fair, I’m really proud of that one.
I think a lot of those relationships and what we like to do kind of coalesced in a show a few years ago called Minimum Wage, where each of us made over 40 one-hour paintings, each one name-your-price for at least federal minimum wage, which was and still is $7.25/h. All proceeds went to low-wage worker centers in Minnesota. That happened with support from the unions, Arts & Democracy Project, 15Now, and Gamut Gallery — at a moment when we were trying to get the actual minimum wage raised in Minneapolis. 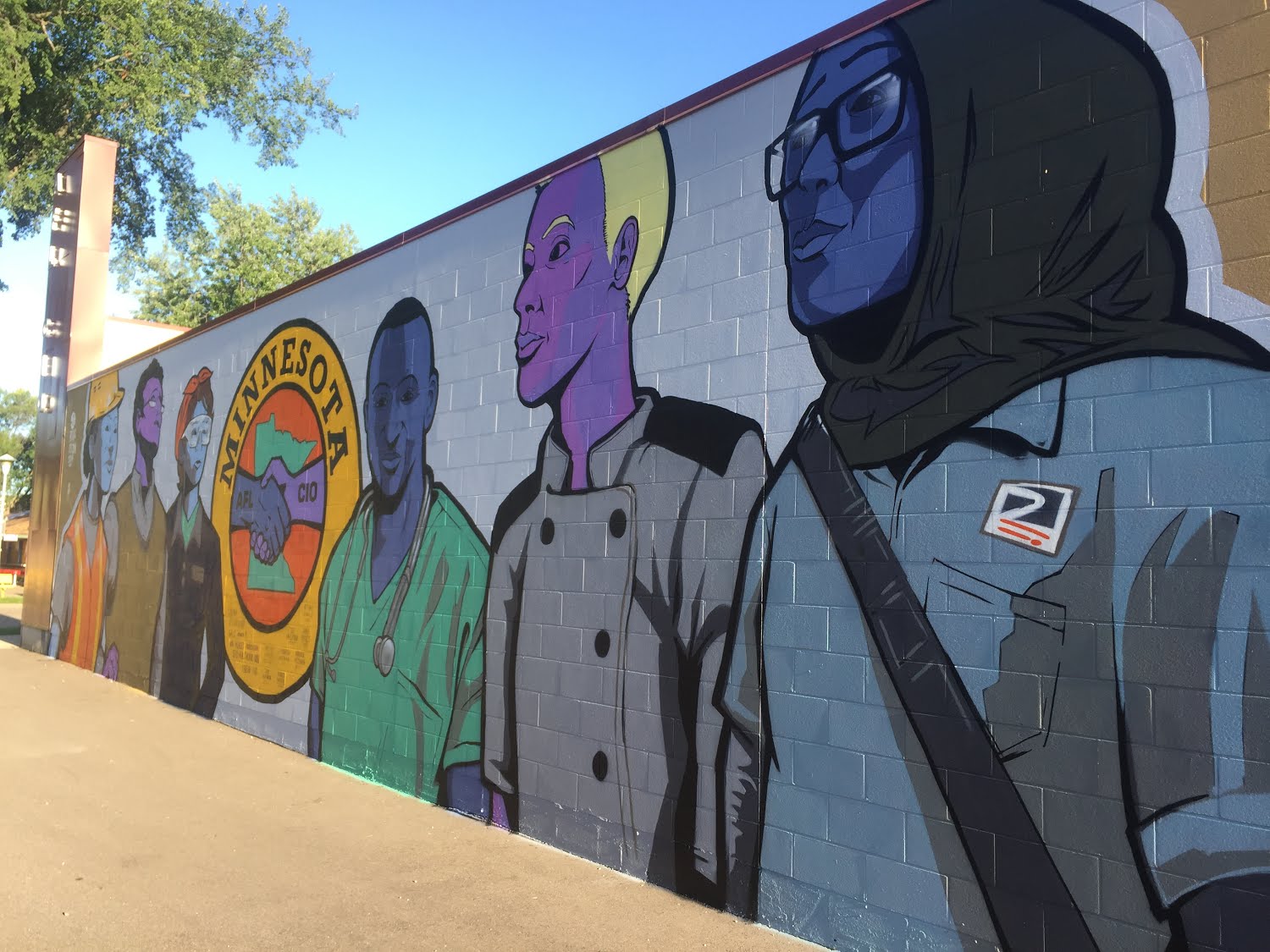 Do you think working collaboratively has helped you grow as an artist more than you would have individually?

Absolutely. Everyone in Rogue Citizen comes from different art & academic backgrounds. You learn how to be patient and listen real quick, you’re forced to work with colors, compositions and textures you normally wouldn’t. We only had one rule when we started collaborating on canvases — nothing’s sacred. The end is all that matters, so if the consensus was some element gets painted over or sanded out, that’s what happened. I’ve gotten better at embracing that idea in my own work. And I’ve gained a lot of technical skills from working with the group: spray paint, light construction, art installation.

Collaboration can be difficult for artists. Was that hard for you to get into? Do you have any advice for young artists who might want to work collaboratively in the way Rogue Citizen does?

Crew up or screw up. Even really ambitious solo artists don’t succeed in a vacuum. Everyone needs support, and if artistic collaboration is a real priority, drop your ego at the door and figure out what works, so you’re also in a position to offer support. And if you find yourself making rent money from it, LLC up. Being a business is a pain in the ass but totally worth it.

You do a lot of murals. Can you reflect a bit on the nuance between public art and other aspects of your practice?

Murals can be so big and tangible, and have a life of their own in a way that paintings or digital work often can’t. Something that can help characterize a city block or a whole neighborhood. I’m not sure I’ve worked on anything that’s really done that, but it’s an amazing idea. Even though you may have gotten paid for it, and someone technically owns the building, once it’s up nobody can really “own” a mural or take it with them. Unless you’re famous and they carve up the wall to auction it off, I guess. People are the worst. 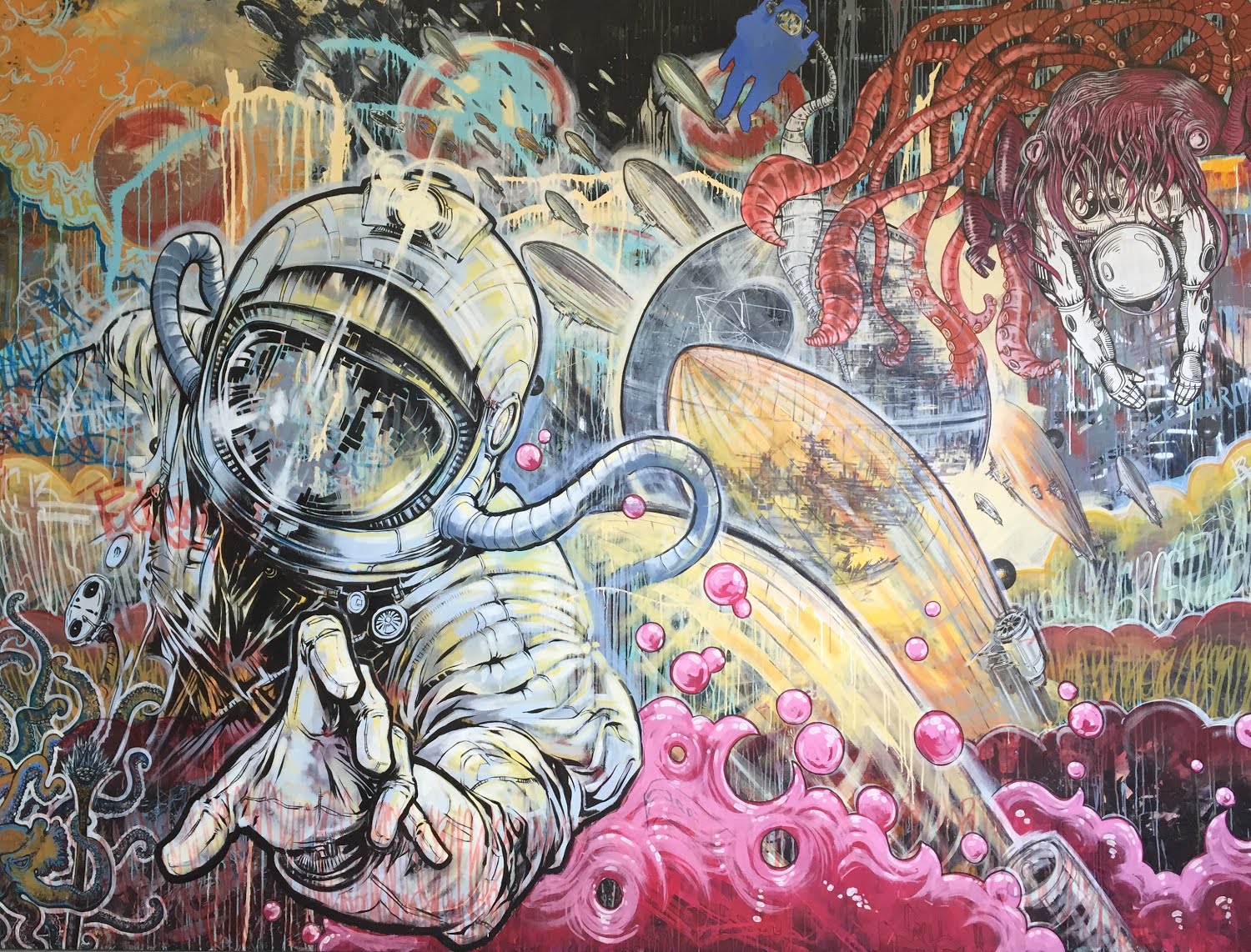 What was the best advice given to you as an artist?

When I was in school a visiting illustrator explained that there were three things to keep in mind in order to be successful: 1) make quality work, 2) meet deadlines, and 3) get along with your art director. But the catch is, he said, you only need to do any two out of the three, doesn’t matter which two. I thought that was really strange at the time, but now I think it explains so much, and not just in commercial art.
How have the events of the last year affected your work?

2020 was tragic and transformative, and frustrating and just such a clusterfuck. I was the lead on a massive RC project going into February, and broke my leg a couple days before we were scheduled to begin. The rest of the crew, along with WUNDR and Jessica Barnds, perfectly finished that enormous interior mural (at Minnesota’s Largest Candy Store) right as we got into pandemic lockdown at the end of March. To eat up time and stay sane, I started posting daily 8x8” paintings, which I’m still making when I can.

The killing of George Floyd and the uprising shook the world, and it’s still shaking. I’ve made public art around it just like a lot of other people, but I’ve been inspired by what Andres Guzman, DAESK, Reggie LaFlore, Leslie Barlow, and others have made, and what groups like Black Visions Collective and Reclaim the Block have been working toward. Black lives must matter, policing must be reimagined, and our justice system must be rebuilt. 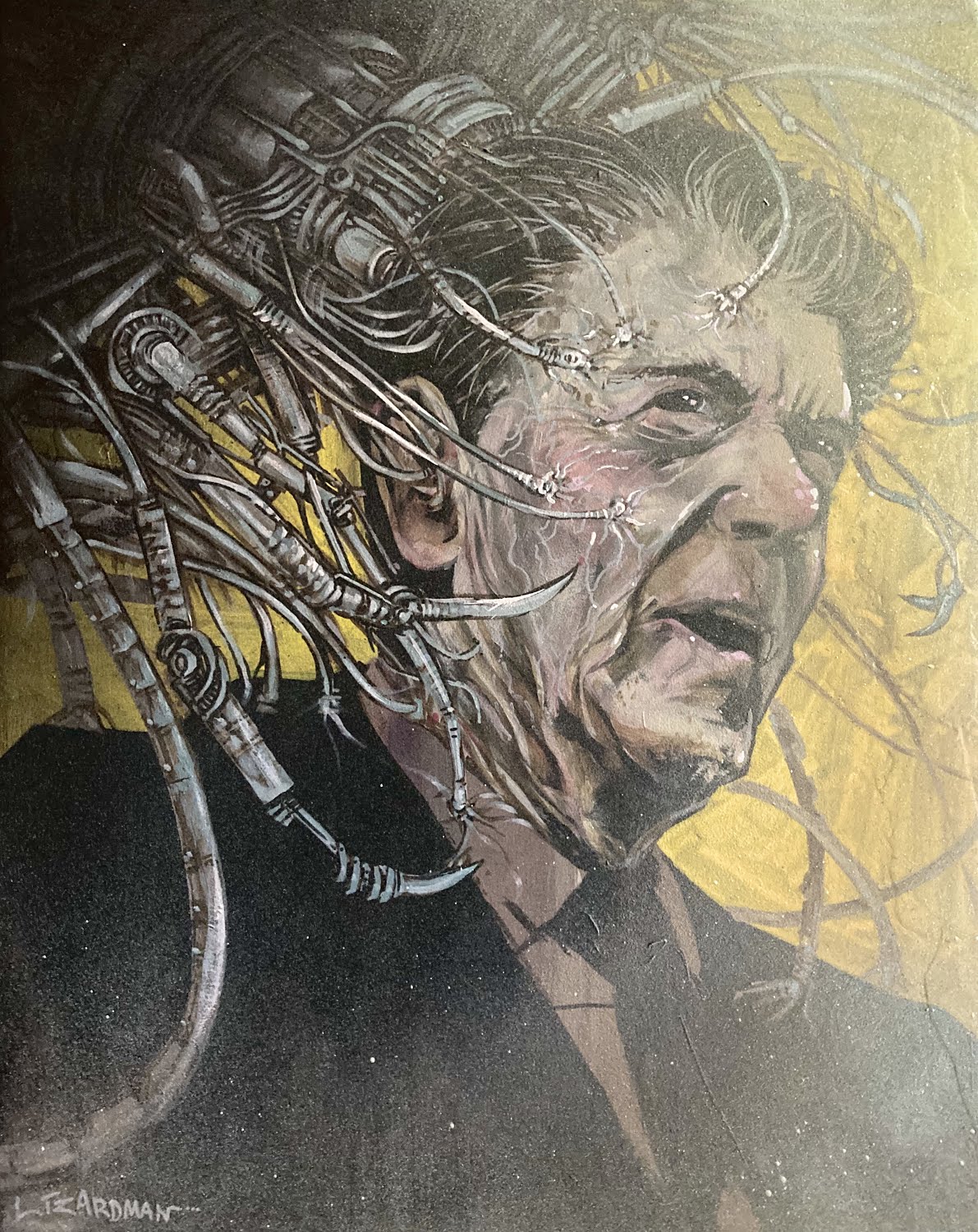 What, if anything, do you hope the audience takes away from your work?

My work in the Sketchbook Project, and in the Gamut Gallery exhibition, for me is about process, and tension, and it’s some kind of muddled science fiction fever dream, maybe.
Unlike illustration, which is usually trying to communicate a particular message or feeling, my personal “fine art” work is still developing. I hope the audience sees that I take my craft seriously and I’m learning.

By the time this gets published, Minnesota will be lifting further Covid-19 restrictions on occupancy, etc. What is something you are really looking forward to?

I’m looking forward to traveling more often for work, and visiting family. Traveling for any reason, really.  After I get a shot or two in the arm I’m really looking forward to sitting at a lunch counter, and meeting friends at a bar. 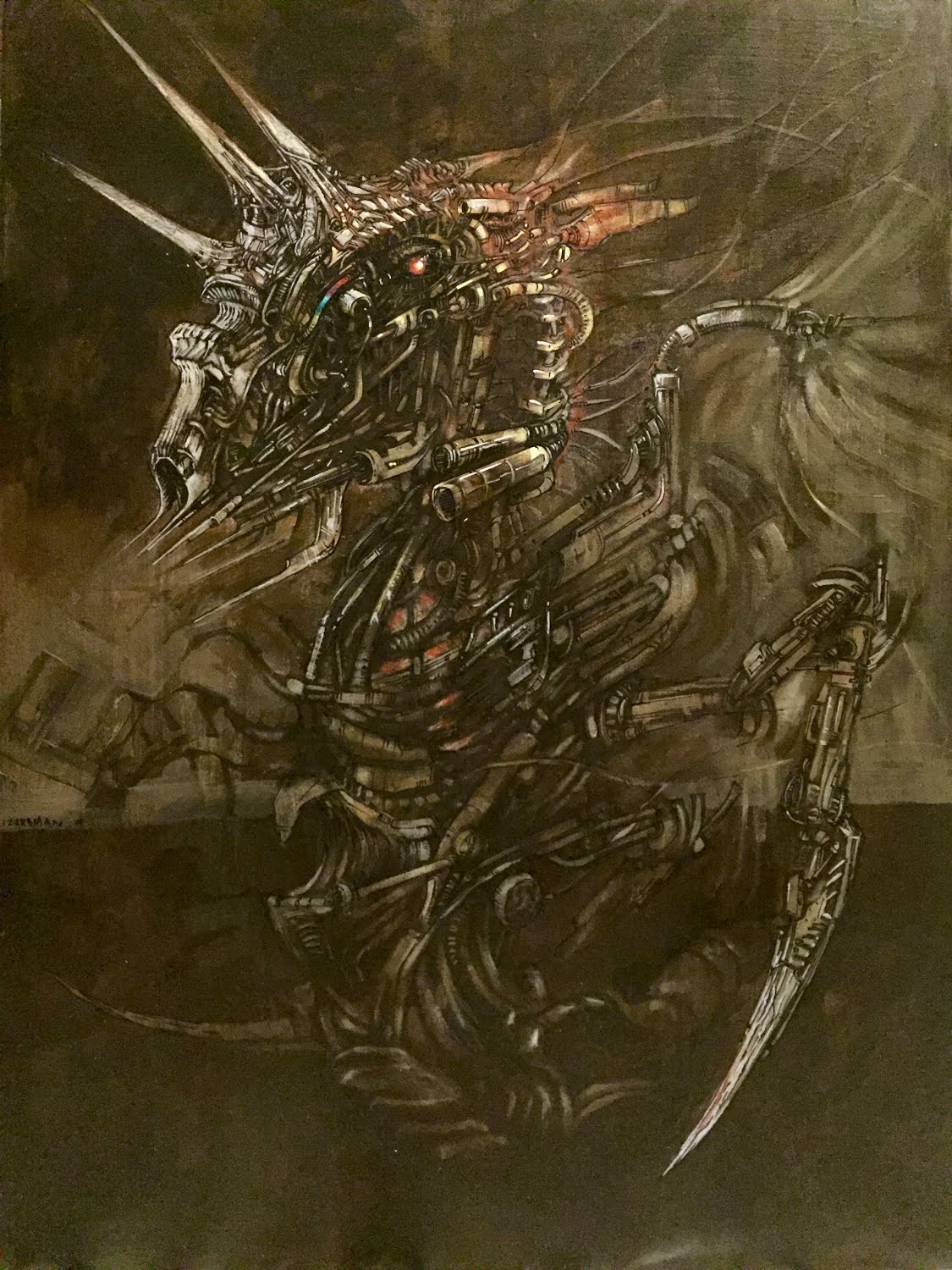 The 2020 MPLSART Sketchbook Project had a big impact for a lot of artists. What was your experience working on the project? Do you have any suggestions for artists interested in participating in the 2021 Sketchbook Project?

It was awesome being one of the last artists to work in the sketchbook I was in because I got to see what everybody else had done. There are some great artists in that one, like Jennifer Davis for instance, so I felt motivated to make something cool and worthy. 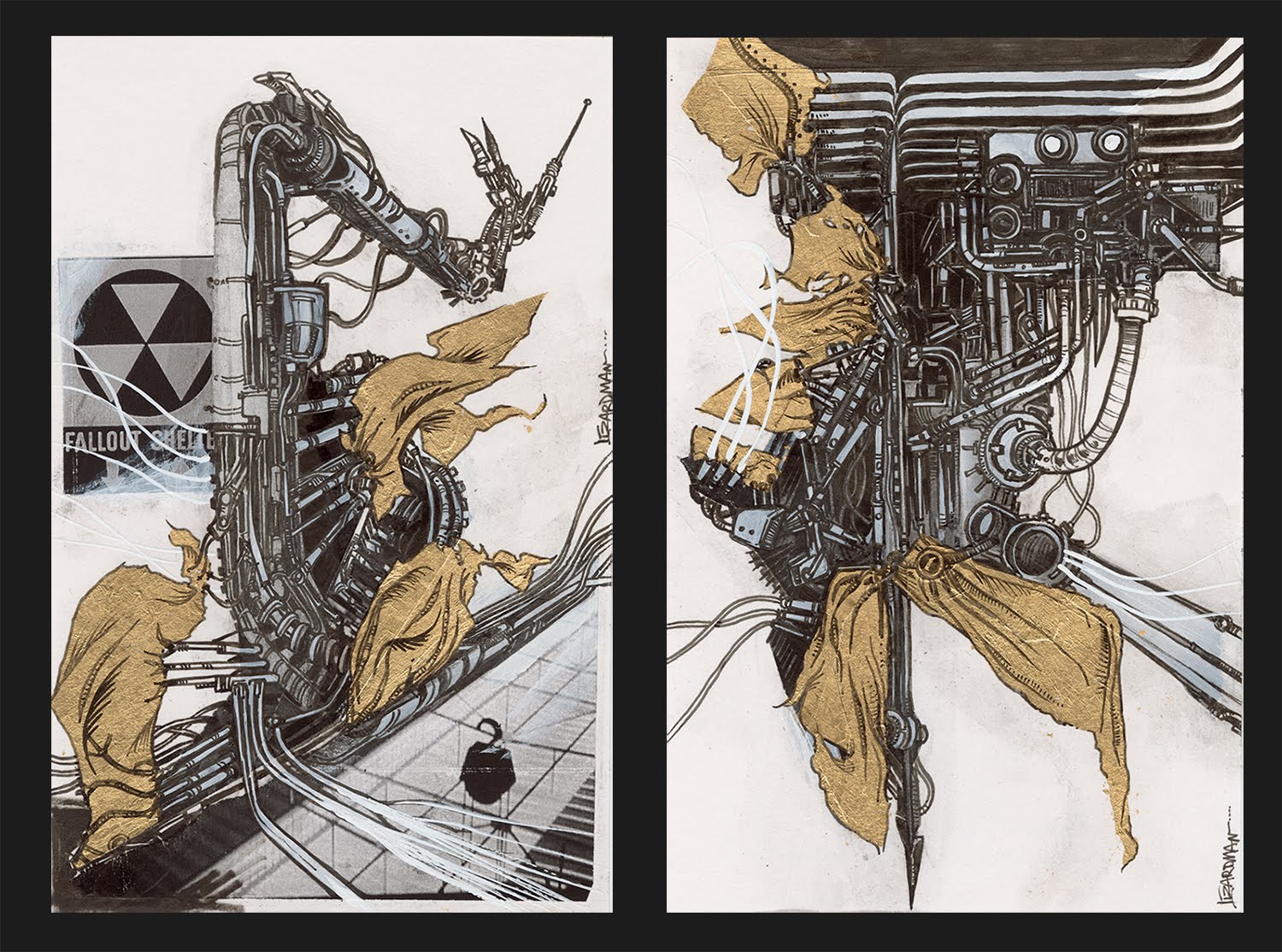 How can people best support you and your work right now?
A lot of my work can be seen at lizardmanart.com / IG @lizardman_rc . Also my crew Rogue Citizen at roguecitizen.com / IG @rogue_citizen .  Commissions are open, no wall is too big, no canvas too small.
Thank you so much for your time and contributing your work to the MPLSART 2020 Sketchbook project. I’m really looking forward to seeing what you do next.

Thanks for having me on board for this round. I hope this project keeps rolling. ♦ 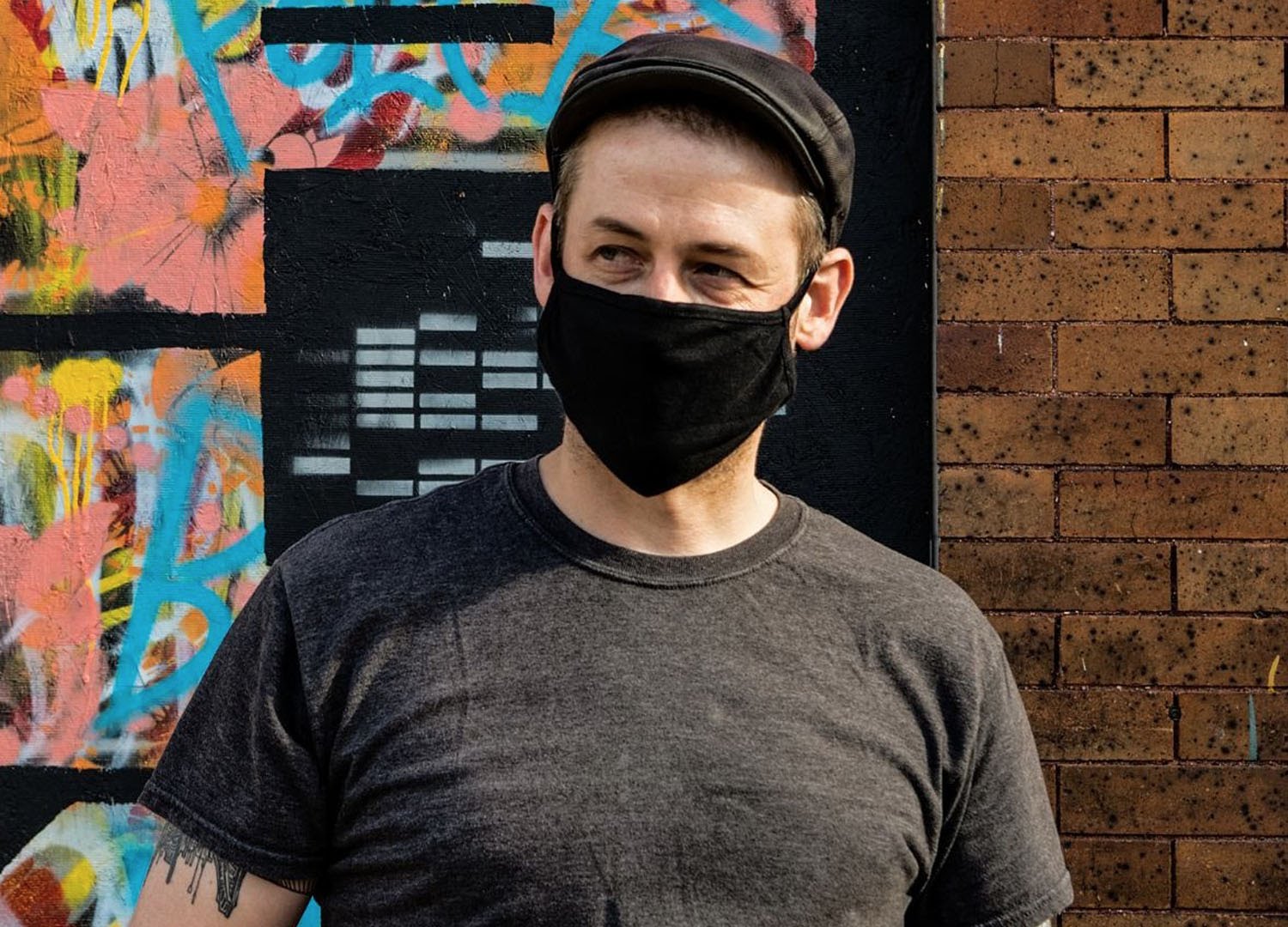 Lizardman. Image courtesy of the artist.