The Fight for the Future of California Street

As the City Council considers a massive new development in Northeast, the artists and owners of the neighboring California Building push back to make sure it's a good fit for the Arts District.

EDIT: This article has been updated to include comments from developer William Boulay, as well as a postscript Editor's Note to expand on the issue of affordability in this development. The original title of this article has also been altered to avoid any confusion about editorial intent.

The City Council will be voting on whether to move forward with this proposal at their meeting on Friday, November 13th at 9:30am. We recommend you reach out to your Council representative before then to weigh on this project. More info on the initial proposal can be found here, and the latest from the Northeast Minneapolis Arts District can be found here.

The 160-unit building, located over two adjacent properties at 2301 California St. NE and 78 23rd Ave NE, will be made up of affordable housing units, in addition to production space on the first floor of the building. Three lengthy appeals by NE-AD, BNA, and the California Building owners outline many of the points of opposition to the project. The project applicant is William Boulay, of St. Paul-based LS Black Development, who is working with ESG Architects on the design.

“Our greatest objection is that the project, if it goes forward as proposed, doesn’t mitigate the uses properly,” says Jennifer Young, co-owner of the California Building, which provides studio space to 85 artists and makers. According to Young, the California Building owners foresee potential conflicts between the industrial uses of the artists in the California building and the residential use of the people that will be moving into the new development. “If they build it as proposed, they are building conflicts into the future,” she says. “All of a sudden the residential users — the new tenants — are going to complain about noise, and those conflicts are going to be ongoing.”

Part of the proposal for the project is a petition to rezone the two properties, including adding an IL Industrial Living Overlay District to the existing I1 Light Industrial District. That change would allow for residential dwelling units at the site and also seeks a permit to increase the height that would be allowed. Ultimately, according to the California Building appeal, the 2301 California St. development imposes a residential building into an industrial zone.

The initial rendering of the new development, submitted to the City for approval by LS Black Development and ESG Architecture & Design, courtesy of an August 6th memorandum from the CPED detailing the proposal.

But according to Mei-Ling Smith, a Senior City Planner for the City of Minneapolis, change coming to the neighborhood is inevitable. “There used to be grain silos and storage tanks on this site for years and years and years,” she says. “So it's definitely going to change from a strictly industrial site to one that has a mix of uses, and it has more residential. That’s not something you can argue with.”

The appeal written by the California Building owners asserts that the proposal “misapplies the zoning code and the 2040 Comprehensive Plan in an inconsistent and illegal manner.”

While the Minneapolis 2040 Plan has been passed, the zoning code has not been updated, Young says. In the California Building appeal, Young and her husband John Kremer wrote that the developer used provisions in the 2040 Comprehensive Plan, but doesn’t meet the current Zoning Code standards, including going over the allowed height of the building plan. Young says that even provisions of the 2040 plan aren’t followed, like the requirement that a building of that size be split into two separate buildings.

“Right now there is nothing written for the implementation plan that guides development on industrial land that also has a residential component,” Young says. “Until that code gets written, you have to follow existing code.”

According to Smith, who wrote the city report on the project, a number of people have been upset about the rezoning component to the development. “That's maybe a technical thing that people are still upset about, but one of the things that is being applied for is to add an overlay district to allow residential uses on an industrial site. That’s going to be considered at the same meeting, but it can't be appealed.”

According to Smith, the new 2040 Plan is causing some confusion. “Our new comprehensive plan is adopted, but our zoning code is not all the way up to date yet,” she says. However, the current ordinances aren’t reflective of the future guidance. “So there is a lot of confusion right now. So on a case by case basis, we're trying to be very calculated, we're trying to be consistent with how we're applying these new rules, and we're right now in the process of updating the actual ordinances to more closely reflect the built form. So there is a lot of confusion about that, which is totally understandable. And we're muddling through it as well.”

Besides the California Building owners, artists that have their studio spaces in the building are also gravely concerned about the new development.

Madison Rubenstein, an artist in the California Building, says she thinks this isn’t the right project for the lot. “My concern is that this building is being put next door without any consideration for the artists or people across the street,” she says.“The parking will be right up against our loading dock. I don’t know if I’m going to have the same access and parking.”

Another artist in the building, Hilary Greenstein, says she has concerns the developer has disregarded the community’s desire for green space.

“My research has found several instances of the developers exploiting industrial codes to cut corners and override the interests of artists and neighbors,” Greenstein wrote in an email. “They are ultimately seeking to profit off the history and culture of this diverse artistic community without listening to the community's needs.”

Tim Kremer, Young’s brother-in-law and a board member for the Bottineau Neighborhood Association, who lives in the neighborhood, says he is mostly concerned with the scale of the development. “I can’t find other places in Minneapolis where the city would allow them to build a building that’s a block and a half long,” Kremer says. “The building is so large that the houses directly across the street will not see the sun shine until noon on Christmas Day. The size of the building doesn’t fit with the character of the neighborhood.”

According to Kremer, BNA has talked about being committed to the goals of the 2040 plan, including its goals around affordable housing. “We want more affordable housing, we just think this neighborhood doesn’t need 6 stories,” he says.

Kremer says he likes living in the neighborhood because of all the artists, and he’s concerned this new building, with only 1/3 of the first floor devoted to production space, will move the neighborhood away from the arts. 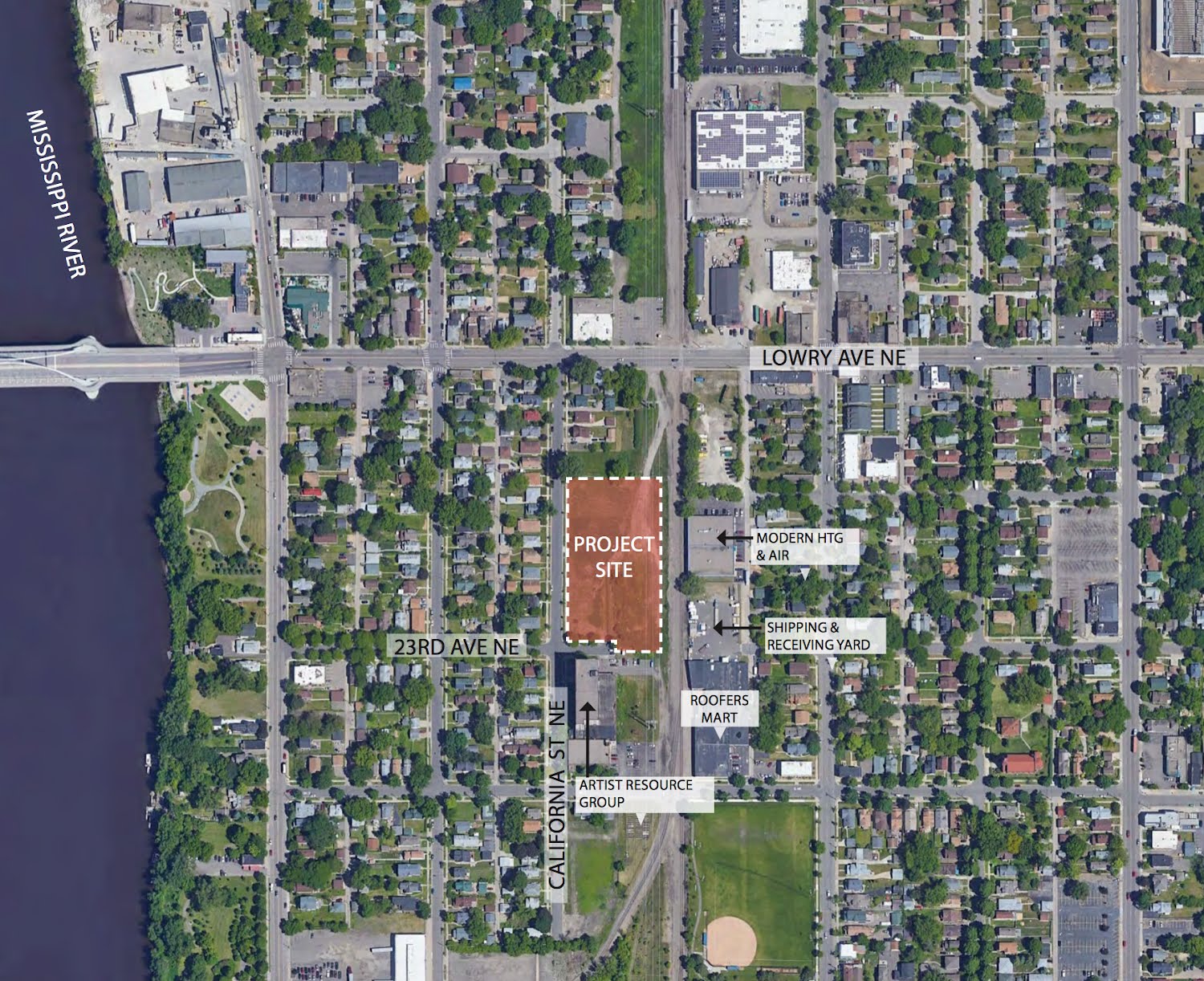 Courtesy of an August 6th memorandum from the CPED detailing the proposal.

According to Smith, a number of things changed in the development proposal after neighbors and artists gave testimony through the planning commission.

According to Boulay, the project for the development has adjusted in a number of ways based on feedback from neighbors. That includes increasing the amount of production space in the building from 11,600 square feet  to about twice that, 23,000 square feet. They also added solar panels to the project, broadened the affordability of the project to be 40-80% area media income, and committed to spending $150,000 to local public art. Boulay also said the project will donate 5 to 10 thousand dollars on a greenhouse construction for the nearby California Street farm, and would add a bike path that would connect to the future Bottineau bike trail. In addition, Boulay said he hopes that artists themselves would live in the building. “We anticipate that a good number of our residents will be artists or people that desire to live in Northeast so they can enjoy the arts.  We also hope that our commitment to incorporate public art into our design will help to inspire our residents to engage in the arts."

According to Smith, what has been missed in much of the opposition to the project is that the development represents a large amount of affordable housing.

“This year, we've received kind of an unusual amount of affordable housing proposals, and that's something that's consistent with the city goals,” Smith says. “It's something that we have been using to justify an increase in height. That's just because it's one of the Comprehensive Plan goals. It’s not the only thing that a project would have to accomplish in order to be approved, but it's one of the things we would be looking at.”

According to Smith, the three lengthy appeals she received about the development, from the California Building and from BNA and NE-AD didn’t talk about the affordable housing. “They're talking about a lot of other issues,” she says. “I think maybe tiptoeing around it.”

“100% of the housing will be affordable,” says City Council member Steve Fletcher.

The average affordability of the development will be 60 percent Area Median Income, Fletcher says. “What they're doing here is actually averaging out so there'll be some that are slightly above that standard, and then a bunch of housing at 40% AMI, which is actually the housing the city needs for people who are really struggling to find housing.”

The next step in the process is a Business, Inspections, Zoning, and Housing committee meeting at 1:30pm on November 2nd, which is open to the public but held remotely due to the pandemic. To give input at the meeting, sign up at this link.

Barring any delays, the final decision on the development will be made by the full City Council meeting taking place on November 13th.

EDITOR'S NOTE: After publication, artists Hilary Greenstein and Madison Rubenstein expressed disappointment that a deeper dive into the affordability of this development was not included. Greenstein, in their original interview, states, "Affordable housing is a human right and is very badly needed in Minneapolis. But this is not it. It is not affordable… We are looking at rents of $1200-2000, which is not affordable to the majority of our neighbors. This project calling itself affordable while planning to charge that much is a gaslighting tactic to divert from their consistent steamrolling of community input.”

Willy Boulay of LS Black Development provided us with a detailed rental structure for the development, the vast majority of which (119 out of 160 units) are projected to fall into this range, from $1200-2000 a month, in a range of different sized units reserved for tenants making 60-80% AMI. According to LS Black, there will be 41 units expected to fall under that range, costing $505-1087 for 1-bedroom units, $601-1066 for 2-bedroom units, and $692-961 for 3-bedrooms, all dependent on the tenants' income. These AMI% rates are scheduled to be in place for 30 years due to a deed restriction on the property.

Again, we encourage you to reach out to your City Council representative before Friday, November 13th, to weigh in on this issue.