Beyond Writing a Check: Wet Paint steps up

It can be difficult to turn left into the parking lot of Wet Paint Artists’ Materials and Framing — but that shouldn’t be a deterrent. Situated on a bustling corner of Grand Avenue in Saint Paul, surrounded by other independent businesses, the feeling of socially-distanced activity adds to the store’s atmosphere.

In late summer, a back-to-school buzz pervades as staff members assemble kits for local high schools and Macalester College students pop in on last-minute supply runs. Although this kind of activity has increased, the store has been busy all season — with curbside pick-up through the spring and early summer, and the addition of in-store shopping in late July.

While Wet Paint has long been a supporter of area schools and arts organizations, it has taken on a more pressing role in the last few months. After the murder of George Floyd in late May, local artists have created hundreds of murals across town to protest ongoing police brutality, and the store has helped with guidance and financial support.

“When someone comes to us saying, ‘I’m in this community. Here’s what we intend to do and here’s how you can help,’” says co-owner Scott Fares, “we’ve been making sure they get what they need.”

He describes a period of time when artists would show up regularly with a patron and a wall to paint. They would give Wet Paint a budget, and the store would start taking discounts and throwing in free items to make sure the project stayed within it.

“I called Wet Paint the first week in June to secure materials for painting, and they gave us a bulk order discount plus some free materials like brushes and cups,” says Leslie Barlow, one of the leading artists behind Creatives After Curfew. “They were even able to get us materials the same day that I would call them — their local delivery option made things so much easier.” 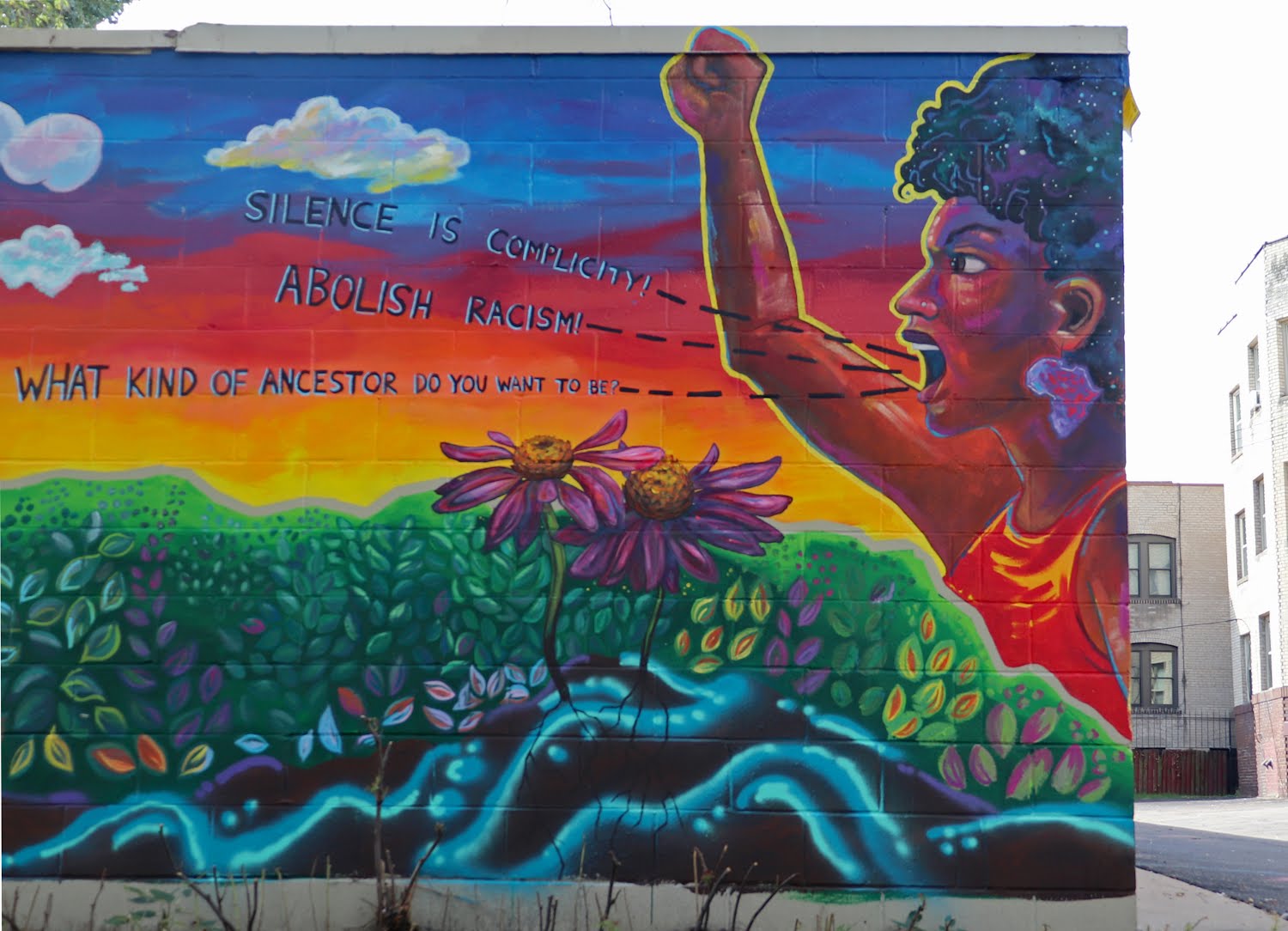 Located one block north of Stevens Square Park in Minneapolis, a recent mural by artists from the Creatives After Curfew collective was created using materials from Wet Paint. Photo by Bridget Kranz.

At the time, customers weren’t allowed inside Wet Paint due to the COVID-19 lockdown, and Fares recalls making deals by talking over the phone — or yelling through the store window. “It wasn’t business as usual, we were just getting things out there to people and figuring it out later."

Another challenge was keeping enough of the right materials in stock. With protests ongoing across much of the country, Fares noticed a run on everything from sidewalk chalk to mural and spray paint. Throughout the pandemic and the demonstrations, Wet Paint has tried to make its inventory responsive to the community’s needs — both altering and building on the foundation of over 40 years in business.

From college store to art destination

Fares took over ownership three and a half years ago, along with business partner Darin Rinne. Despite their short tenure as owners, the pair’s relationship with Wet Paint dates back over three decades. Rinne has worked there almost continuously since graduating from Macalester in the late 1980s, where he met Fares in the printmaking department.

Founded in 1976, Wet Paint initially operated out of an apartment above its current location, catering to students at the neighboring campus. Still, since its founding, the store has also attracted a large professional following from across the Twin Cities.

“At one point, we had over 16 different lines of oil paints and none of them were student-grade stuff,” says Fares. He credits the previous owner, Beth Bergman — who helmed the store for over 30 years — with setting up a successful foundation for the business.

“She realized early on that we couldn’t compete on price alone — we needed to have a real selection of high quality items and a specialization that you couldn’t get any other place,” he explains. “The challenge for any independent art supply store is having enough selection to make it worth someone’s while, and that’s why Wet Paint has been able to survive and thrive.” 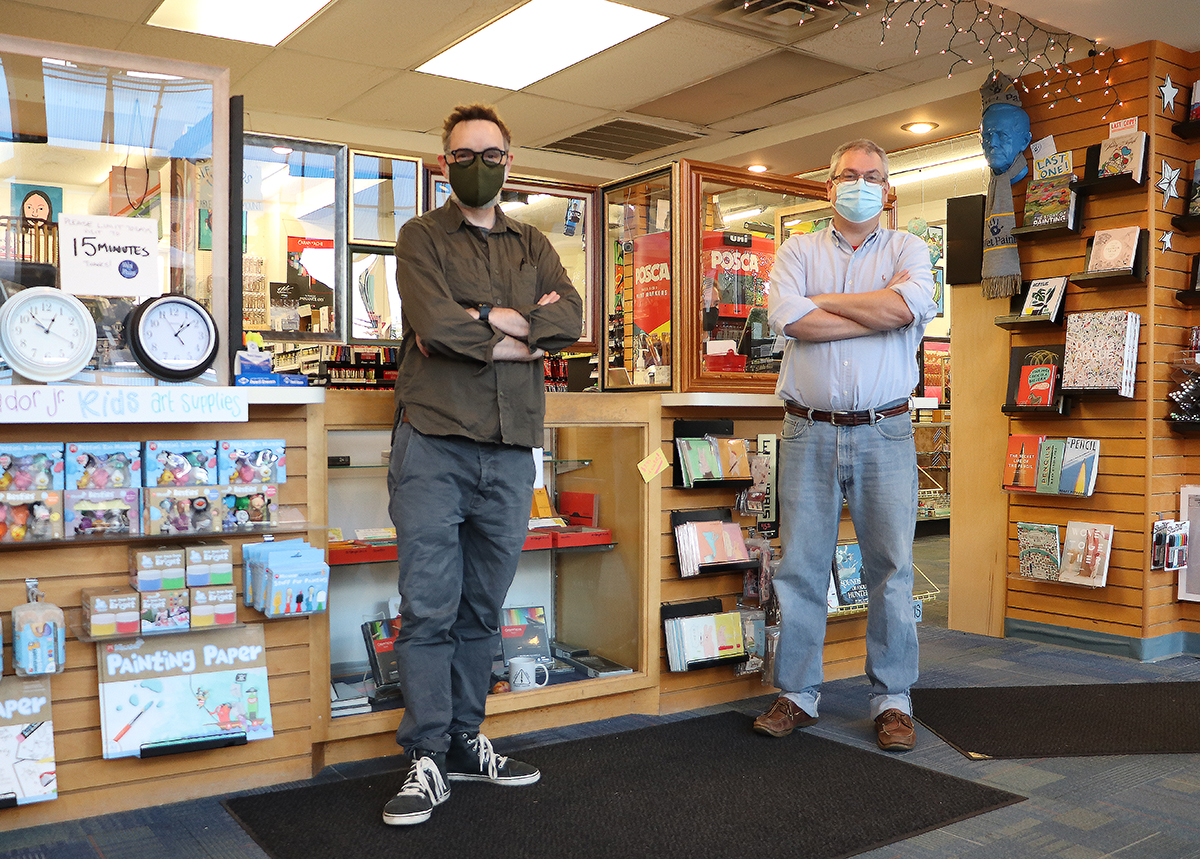 Darin Rinne, left, and Scott Fares have owned Wet Paint Artists’ Materials and Framing for three and a half years, but their relationship with the store dates back three decades to when they were students at Macalester College. Photo by Bridget Kranz.

Personal connections with suppliers have also helped the store stay healthy over the years, as the owners are in regular contact with brush- and canvas-makers, working with them on inventory as well as community initiatives. As Fares notes, most manufacturers consist of only one or two people and are even smaller operations than Wet Paint.

These relationships also help when it comes to partnerships between Wet Paint and the Twin Cities community. Recently, a number of manufacturers donated supplies to make kits for youth in Urban Ventures, a nonprofit program based in South Minneapolis. Instead of just passing the materials along, Wet Paint sold them in-store, giving customers the chance to sponsor participants by buying a kit. They were then able to donate both the kits and the money to Urban Ventures.

For both the suppliers and the store itself, Fares says he also likes to find ways of giving back that go “beyond just writing a check.” This summer, that has taken the shape of helping stock and distribute materials for murals — including providing guidance on which brands or types of paint might work best in different scenarios. 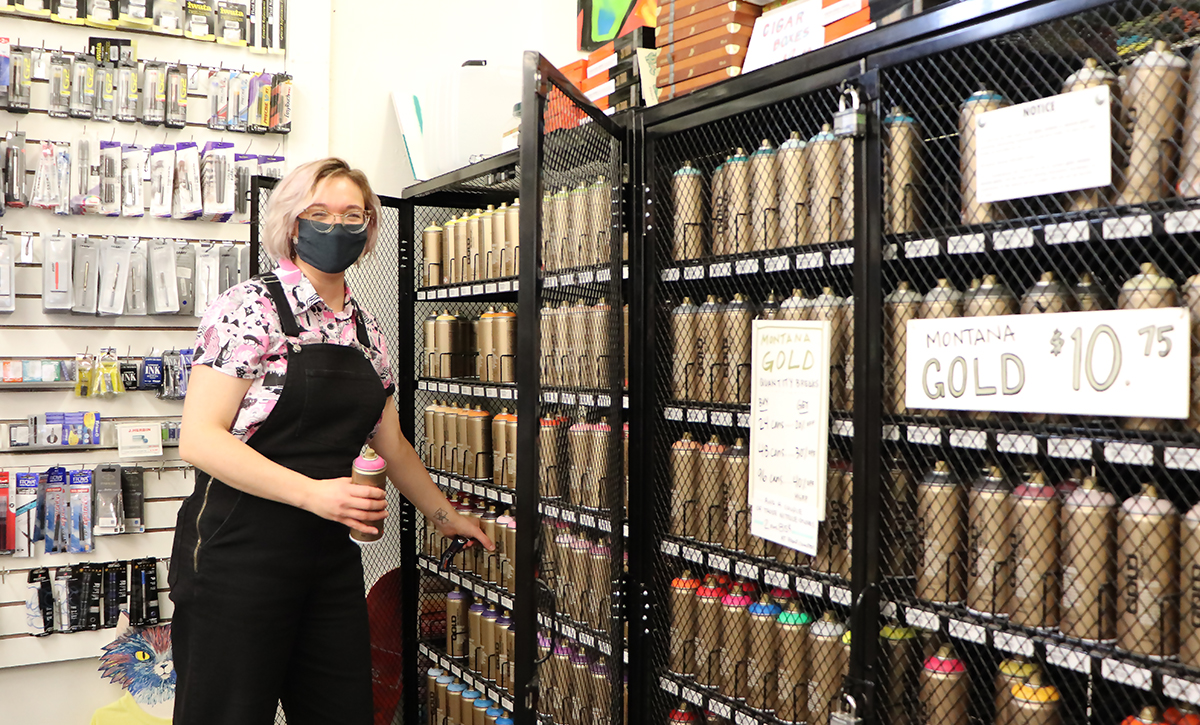 Marketing manager Kristina Fjellman restocks a spray paint cabinet at the Grand Avenue store front. As local artists create murals to protest ongoing police brutality, artist-grade spray paint has been one of the store’s most important items this summer. Photo by Bridget Kranz.

When planning for this year’s second annual Chroma Zone Mural & Art Festival, it quickly became clear to director Angela Casselton that it couldn’t be an in-person event. Still, the group decided to use its funds to commission a handful of artworks in St. Paul’s Creative Enterprise Zone, continuing the momentum after last year’s twelve artist-led works.

Casselton reached out to Wet Paint about partnering on this year’s murals, and the store is now involved in an advisory capacity — providing guidance on materials, as well as significant discounts.

“The artists get to choose to work with Wet Paint. They go over there and establish a relationship,” says Casselton. “Next year, we hope it will be an even deeper partnership, where we can bring in representatives from paint brands and do product demonstrations for the community.”

She also felt that bringing in Wet Paint as a partner added to the reputation of the festival, given the business’s long history. For Fares and Rinne, it’s a symbiotic relationship — the store supports the local arts community, which in turn produces more artists and projects to support the store.

A colorful mural by Jeffrey Nelson of Jephemera brightens up the back of the store, overlooking its parking lot off Grand Avenue in St. Paul. Photo courtesy of Wet Paint.

Wet Paint is located at 1684 Grand Avenue in Saint Paul, and online at wetpaintart.com. They are open 7 days a week from 10am-6pm, and don't forget to wear a mask!

Wet Paint is a regular advertiser on MPLSART, but they did not sponsor this content.