Building the Future of Minneapolis: JXTA Needs Your Help!

As part of an ongoing capital campaign, Juxtaposition Arts is working to raise $2M from donors like you to expand their campus.

This is the first in a series of articles encouraging you to help Juxtaposition Arts reach their fundraising goal before the end of the summer. Donate today!

Juxtaposition Arts has big plans. And while Covid-19 and the civil unrest and collective grieving that followed George Floyd’s murder caused the nonprofit to cancel their annual Move The Crowd fundraiser this year, JXTA is still moving forward with their ambitious capital campaign. The goal for this summer is $2 million from individual donors, part of a $14 million overall campaign to cement JXTA’s place as a vital arts center in North Minneapolis. With the fundraiser, JXTA is making moves to create an extensive arts campus in North Minneapolis, one that will bring the work the organization has been doing in the community to the next level.

JXTA isn’t just an arts education hub. The organization’s model is about building up North Minneapolis’s strength through the arts, with year-round learning opportunities for youth as well as its core JXTALabs program, where young people age 14-21 are paid a living wage as they build arts and design skills.

JXTA first came to be 25 years ago, when Roger and DeAnna Cummings, along with co-founder Peyton Russell, were teaching arts classes in different spaces around the city. They decided to form their own nonprofit in order to centralize the arts education programming they were offering, which included mentorship opportunities and training in mural painting and contemporary art.

In the 2000s, JXTA purchased three buildings at the intersection of Emerson Avenue and West Broadway in North Minneapolis, redeveloping the buildings as spaces for education but also re-imagining how art could build wealth by and for North Minneapolis communities. During those years, the organization shifted from just being about creating and teaching art to thinking about art as a tool in community development. 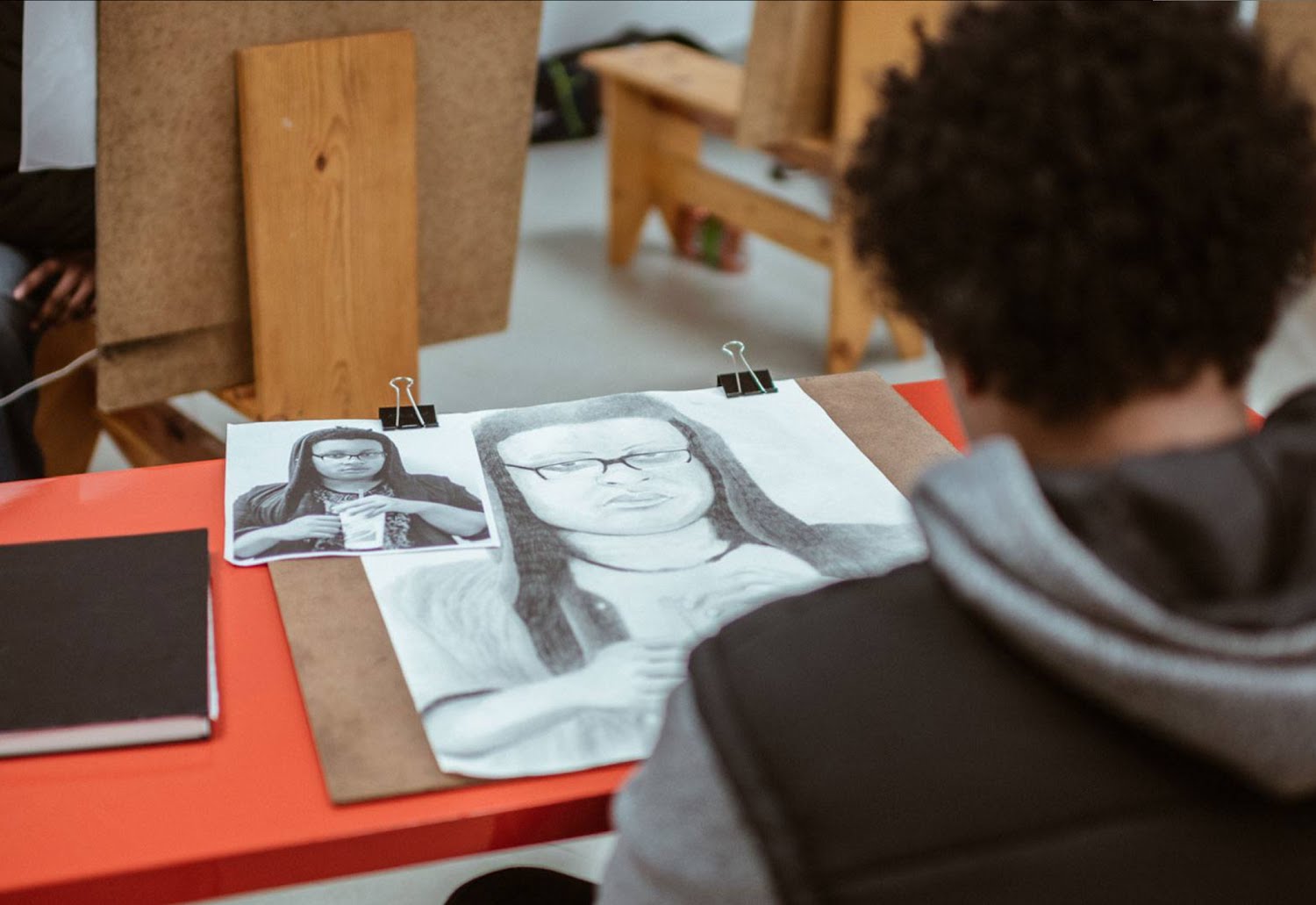 “I like being able to do art, and I like being able to do art in the community, but also, more importantly, I want to bring the community along so that they benefit not just from my art in general, they benefit from the financial opportunity,” says Roger Cummings, JXTA’s Chief Cultural Producer. According to Cummings, the vision for JXTA grew into something that was using art as a means to build capital in the community, where participants were gaining project management skills and had ownership in what was being created.

Cummings says the notion of using art as a way to build wealth came out of Intermedia Arts’ Institute for Community and Cultural Development, a program run by Bill Cleveland and Erik Takeshita. “They showed examples of people’s work from all over the country,” says Cummings, including ways organizations were using social practice as well as using art to earn money.

Cummings calls it an Aha! moment. “This could be something larger than what we are currently seeing,” he remembers thinking. As part of the Institute, the JXTA leadership team studied what would work from other initiatives around the country.

“We went to study and had a year to go visit all these places and really dig in to see what they were really about, and then what is our place in the whole mix,” he says. The experience of being part of the cohort offered JXTA both the connections as well as the roadmap to take the organization’s impact to the next level. “That gave us the know-how, the credibility, the connections, to be able to bring this to fruition,” he says.

One big success was in 2004, when the organization began to re-imagine West Broadway as a corridor, which involved an exhibition that included models for what the corridor could look like. Staff from the Minneapolis Community Planning and Economic Development department attended the exhibition, which resulted in the city eventually unveiling the West Broadway Alive! Small Area Plan. “I think that was a way that artists were beginning to be involved in the planning of communities in a more official, city-sponsored way,” Cummings says.

Since 2010, JXTA has employed an apprenticeship model, where young people from the Twin Cities, prioritizing those from North Minneapolis, are offered paid positions as they learn art and design trades. The apprentices are paid an hourly wage as they work in areas of graphic design, contemporary art, screen-printing, environmental design, public art, and mural painting. 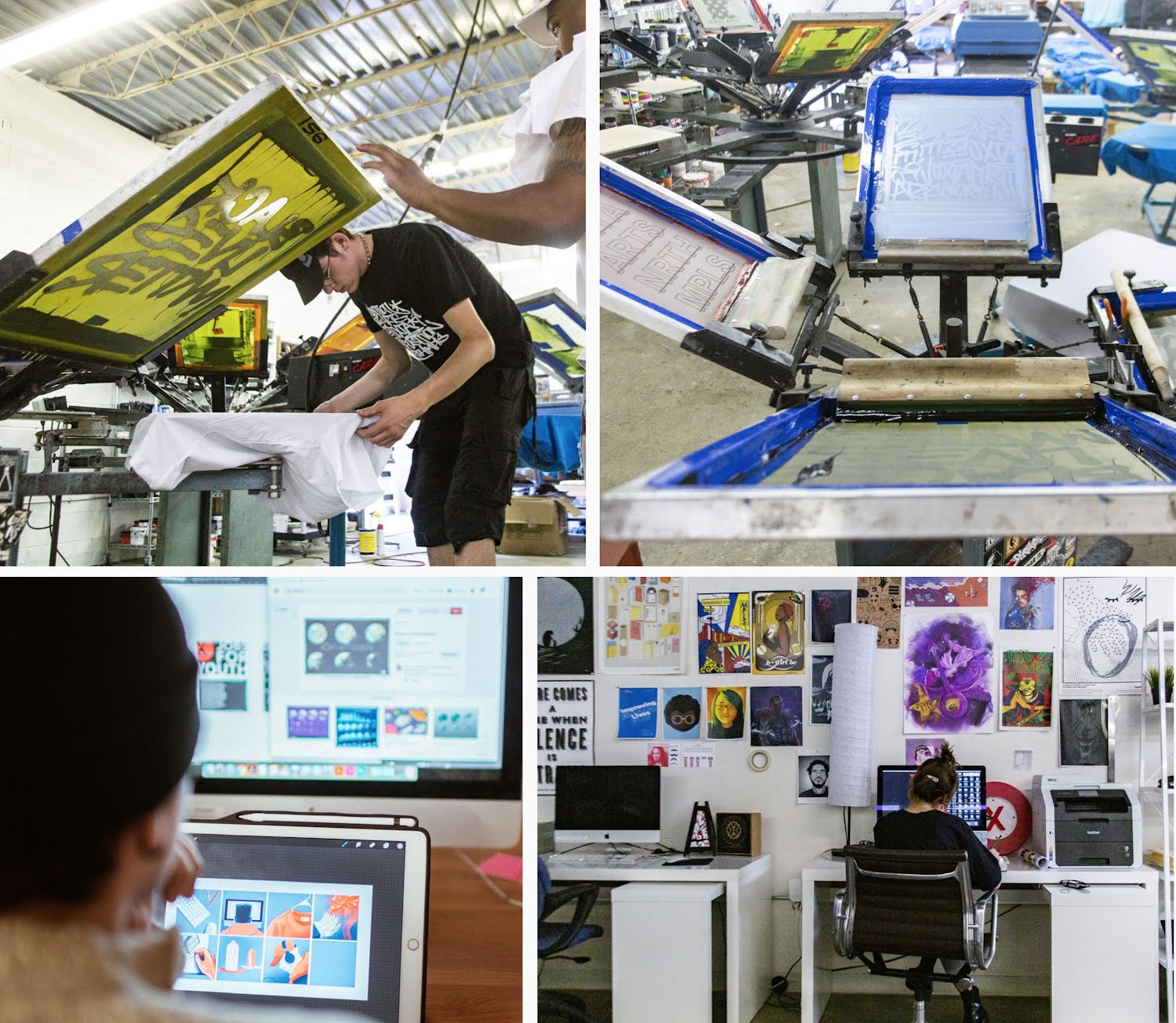 Currently, JXTA is experiencing a leadership transition, as longtime CEO and co-founder DeAnna Cummings moves to her new position as Program Director of Arts for the McKnight Foundation.

According to Roger Cummings, JXTA is breaking up the Executive Director role into three separate positions: a Managing Director, a Financial Manager, and an Executive Assistant. The team, working with Cummings, are heading up the already underway capital campaign, part of a vision for JXTA’s campus that goes back over a decade.

This summer JXTA has secured over 1500 new individual donors, many of whom had never donated to JXTA before, Cummings says. “They were just random people that were just starting to donate twenty bucks, one hundred bucks, a thousand, and so that is great,” Cummings said. “We know our reach is getting out there.”

So far, JXTA has raised $3.1 million over the past two years. Part of that money went into building a temporary skate park, as a way to have something both beautiful and functional that the community can enjoy during the construction phase of the project. And this month, they hope to build on that momentum.

“We need another $400,000 to go and we'll get that $4 million mark, which would be huge,” Cummings says. “If we get this money before the end of August, we will start to break ground in the spring.” 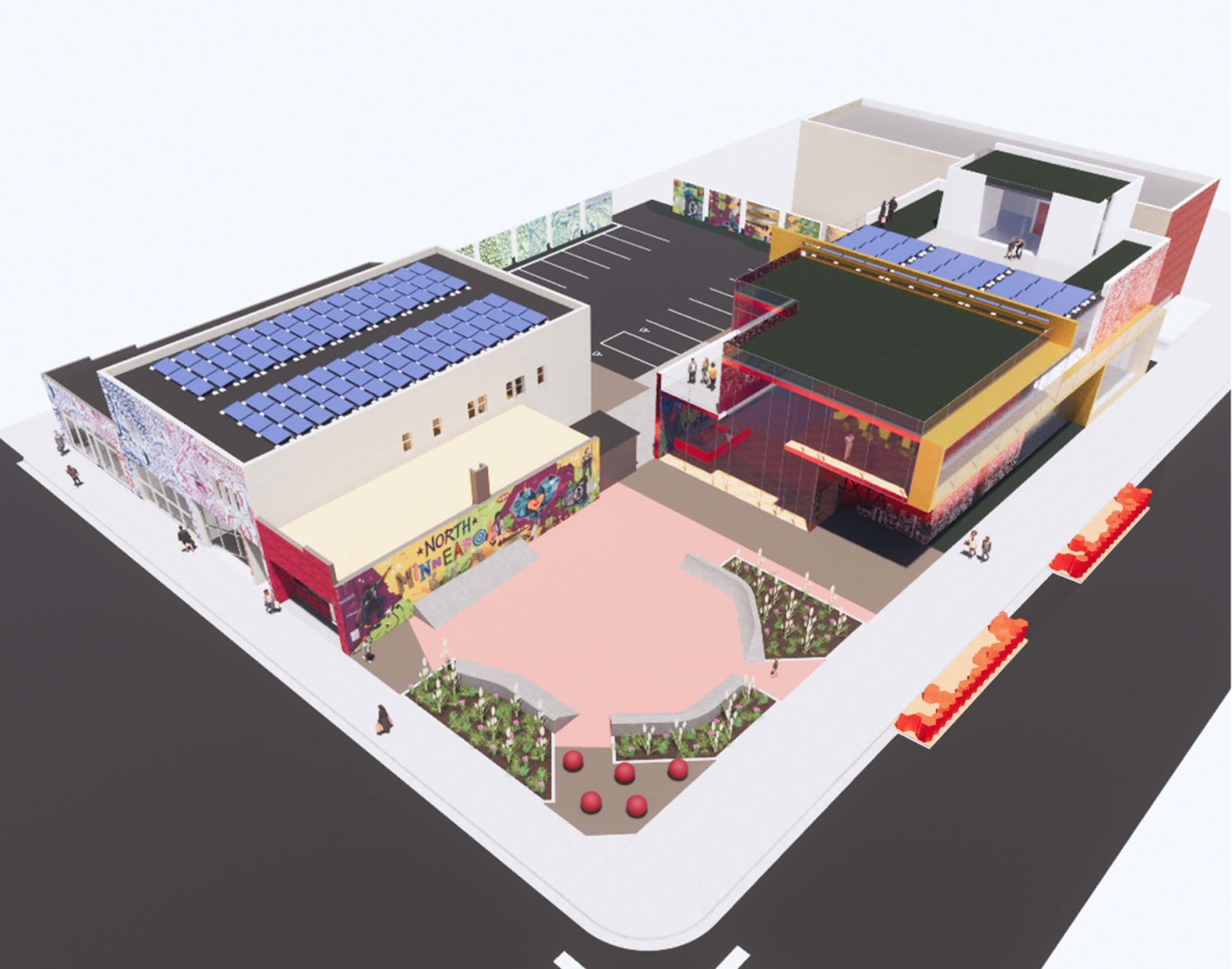 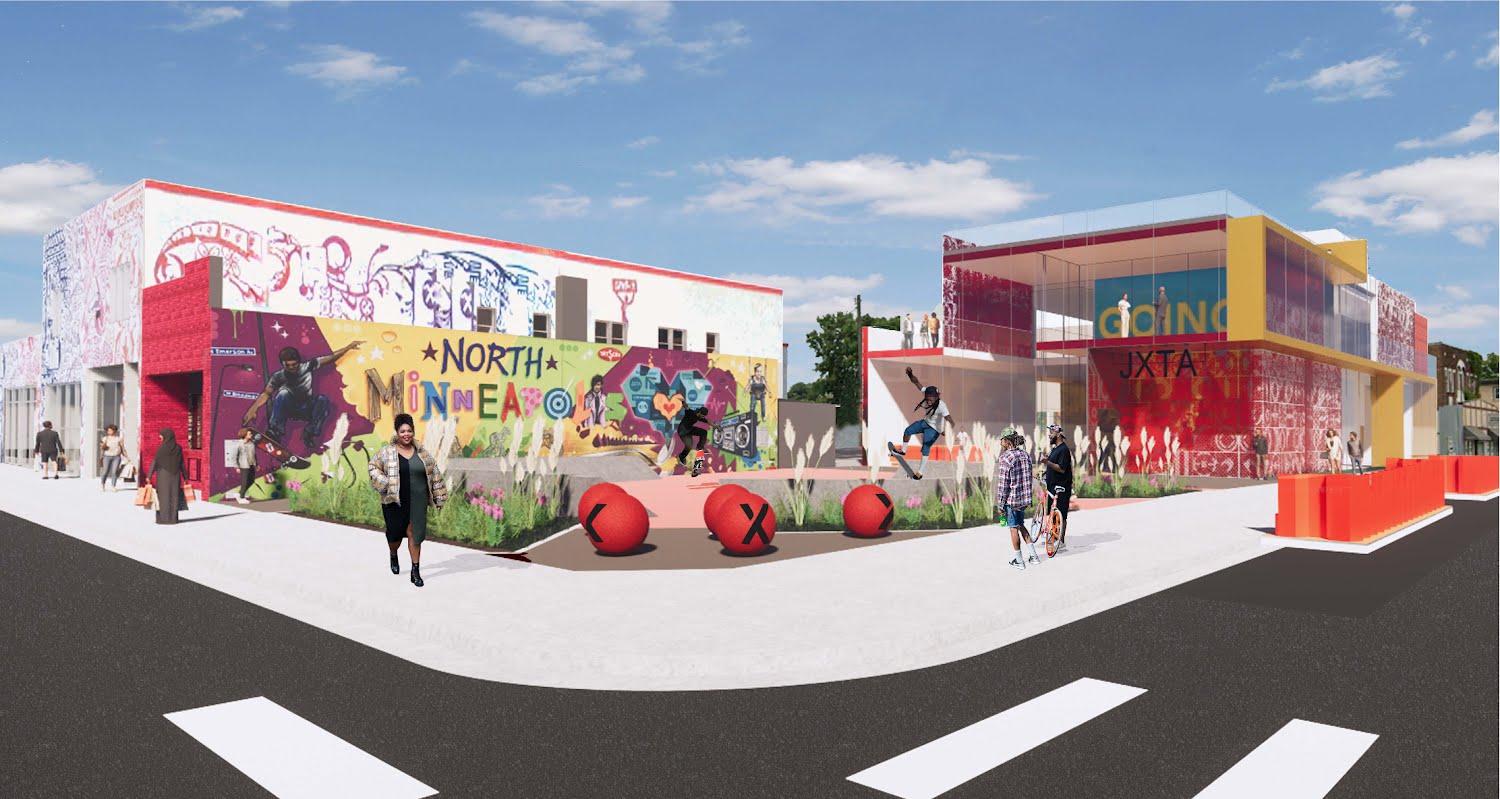 Renderings of the plans for JXTA's expanded campus, including a new arts complex on Emerson Ave and renovations to two buildings on Broadway. Lizzo and Lil Wayne approve! Renderings by 4RM+ULA Architecture for Juxtaposition Arts.

If the fundraiser is successful, the new complex will be a three story building that is part of a larger campus. The new art center, which will be located on Emerson Avenue and include property previously owned by Urban Homeworks, will create room for JXTA's education programs, work labs, and an exhibition space, in addition to storage space, a new lobby, and administrative offices. The larger campus will include a mix of old and new, with some of the current JXTA buildings getting renovations, such as the building at 1108 Broadway, which will contain a new fabrication studio. JXTA plans to contract the demolition to a company employing people in the community, and the whole build has been planned with efficiency and sustainability in mind, from reusing materials to including solar panels, a green roof, and an innovative stormwater management system. Cummings says that having multiple buildings in addition to outdoor features like the skate park and a rooftop terrace will encourage people to flow between the different spaces.

“I think that’s the special sauce within JXTA,” he says, “being able to have specific disciplines in different places so that you can walk back and forth to these places just on one block.”

Donate today to JXTA's Capital Campaign! And learn more about what they do at juxtapositionarts.org. And stay tuned as we cover more details of JXTA's impact on students and the Northside in the coming weeks!
All images courtesy of Juxtaposition Arts.