Side By Side: Ability and art at the Interact Center

This St. Paul center for artists with disabilities seeks to expand the ways in which professional creatives "interact" with each other and the community

At the opening for Groundswell, artist Luke Lyons invited the audience to hold his ceramic pieces, cupping them in hand or turning them over to explore the dynamic glazes hidden on the reverse.

“I wish I had a sign,” he laughed. The group exhibition, up through the end of the month at Artspace Jackson Flats, includes multiple, food-safe pieces for sale by Lyons, in addition to two galleries worth of work by his peers from the Interact Center for the Visual and Performing Arts.

Technically licensed as a day program for adults with disabilities, Interact blurs the lines between staff and client artists as everyone creates alongside one another out of the nonprofit’s studio space in St. Paul.

Derek Meier, Services Coordinator with the Center’s visual arts department, says continuing to challenge that divide is one of his main priorities moving forward at Interact. While the current show in Northeast has been a way to exhibit out in the community, Meier added that he wanted to continue to push the envelope as far as where and how Interact artists’ work is shown.

“Venues, as much as you might think they might be open to any and all aesthetics and backgrounds, they can be very narrow in the scope of who they showcase,” he explained.

In the performing arts half of Interact, which hosts roughly 35 actors, staff teaching artists act alongside clients in various productions, which Meier noted can sometimes come as a shock to audience members who think they know what a performer with disabilities may look or sound like.

“A lot of the viewers walk away with this feeling of not necessarily knowing who is who. Some disabilities are really visible and some aren’t, and we house all and any,” he noted. “It blurs that line and that’s really important.” 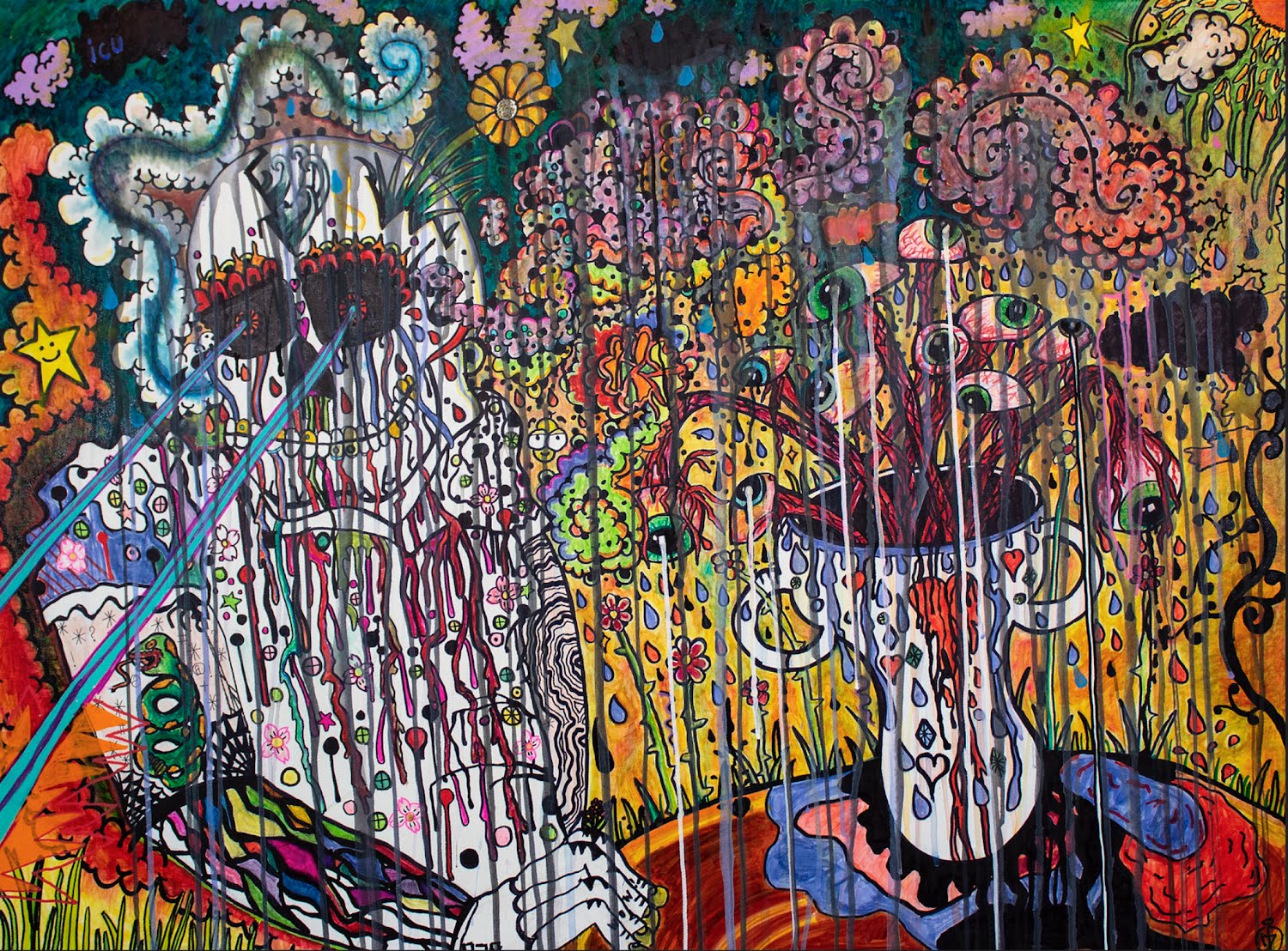 The organization’s mission statement to create “art that challenges perceptions of disability” has carried over to its client artists as well. Longtime Interact painter W.S. Norton said he has also had moments of seeing a work up on the wall and being shocked to find out which of his peers it belonged to.

“When I came, I had judgments about other people’s art and one day, three or four years into coming here, we had a gallery show and I walked in and there were these absolutely gorgeous watercolors. I asked somebody who had done them … and it was somebody that had a very difficult time with communication,” he explained. “She created all these absolutely gorgeous pieces, and it just kind of stripped away any preconceived notions I had of what it took to make beautiful art.

"If you put [artwork] in a gallery and nobody had any idea that it was by somebody with whatever type of disability, it would be fun to see their misconceptions, looking and adoring the art and then finding out who made it,” he continued. “I think people would be pretty surprised.”

The multitudes contained within any one person, and especially within a collective of over 70 practicing visual artists, create a lot of unknowns — something staff members say can be uncomfortable to people not used to being around others who may have a different form of disability than what they have experienced.

“If [people] don’t know someone or don’t have experience being around people with disabilities, they don’t know what to expect. It’s unknown, and I think it can feel intimidating,” said Presley Martin, a visual arts instructor at Interact. “Art is a way in, for people to get to know people and break down those barriers of any preconceived notions of who these people are.” 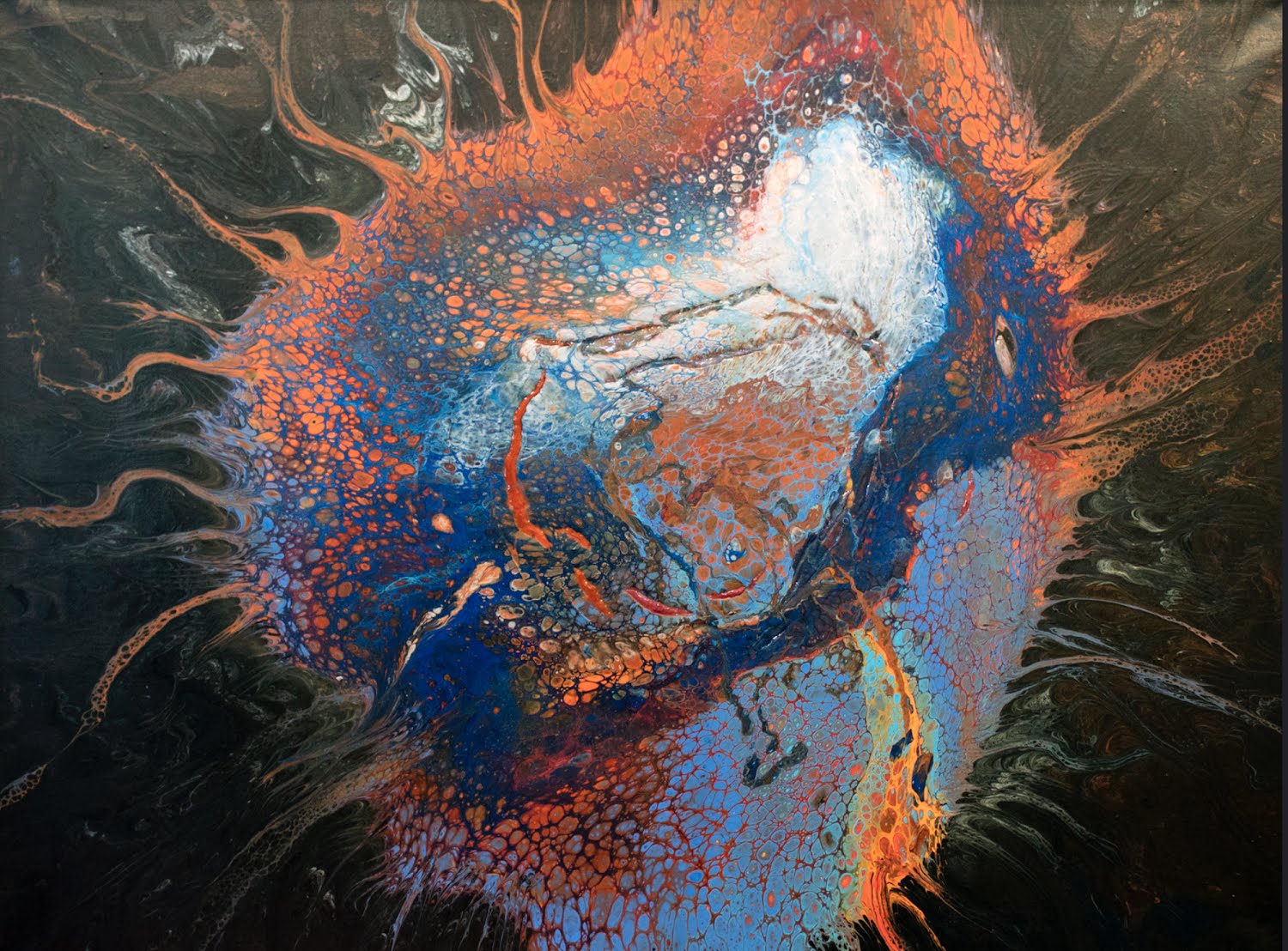 Art has also been a way for many clients at Interact to find a job that feels enjoyable and purposeful. Norton described himself as “unattached” before joining the center eight years back.

“I worked and I was okay or good at what I did,” he explained. “This is the first time that I feel like I’m doing a job, but I’m eager to come in.”

Norton added that, at the beginning, he would miss half the days he was supposed to come in, or sit for an hour at a time doing nothing. Eventually, he said encouragement from the other artists at Interact — both staff and peers — coupled with the skills training he received, gave him permission to explore and even to make mistakes. Now, Norton said he has no qualms identifying as an artist, and sees his purpose as “to explore and to perceive” because of his unique point of view.

Lyons also noted that he had a hard time calling himself an artist during his first few years at Interact.

“I used to tell people after I got out of the hospital, ‘I go to an adult day program where they provide stuff for us to make art.’ Interact was like, ‘No, you’re an artist.’ It took me forever to accept that,” he explained. “Now, when people ask me, ‘What do you do?’  I say, ‘I’m an artist. I work out of the Interact Center for Visual and Performing Arts.’”

In addition to spending the majority of their days in the studio, Interact artists also take trips to local museums and galleries, develop a web presence, apply for shows and grants, and work to plan and curate events. 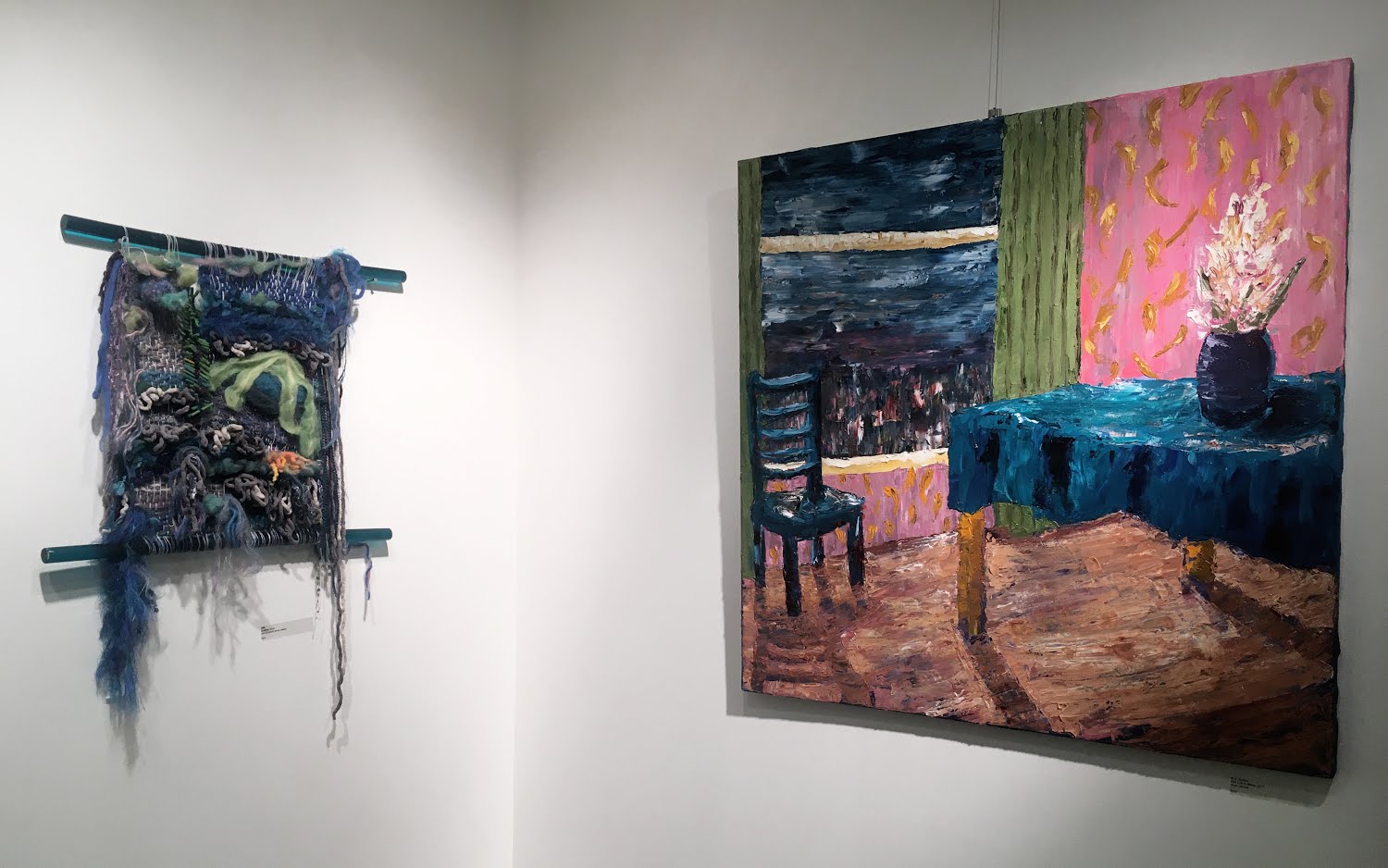 Work from a number of Interact artists is on view through the end of the month at Artspace Jackson Flats in Northeast Minneapolis. Going forward, Services Coordinator Derek Meier says the goal is to have more shows that display participant artists' work alongside staff and community creatives. Photo by the author.

Joli Grostephan-Brancato, Visual Arts Department Manager, said she and her staff try to give clients as much freedom as possible within the limits of Interact’s licensing. One of the ways in which the center has tried to do this is by paying clients for any work they do that goes above and beyond their artistic practice.

“We’ve had artists that attend the program teach workshops. They share a skill with their peers, and are often teaching staff how to do that skill,” said Grostephan-Brancato. “It’s almost like they’re performing the role of staff. We get paid when we do that stuff, so we want to pay the artists for doing that stuff.”

Working around adults with disabilities day-in, day-out for 10 years, Grostephan-Brancato said it can still be jarring when seeing how Interact artists sometimes get treated outside of the center. She emphasized the “radical inclusion” that is one of the nonprofit’s core values and said that, for her, it meant, “not treating people differently, not talking down to people, not using the baby voice … realizing that we’re all adults, and we all deserve the same amount of respect.”

Again, she added that strangers can be well-intentioned, but oftentimes haven’t had the relationships with people with disabilities that can cut away some of their misconceptions.

With a number of shows on the horizon — including one in March at the Quarter Gallery at the University of Minnesota — Meier said he’s feeling better and better about the opportunities for showing Interact work in a broader context going forward.

Groundswell, which consists entirely of work by client artists at Interact, will be up through the end of the month at Artspace Jackson Flats, located at 901 181/2 Ave. NE in Minneapolis. 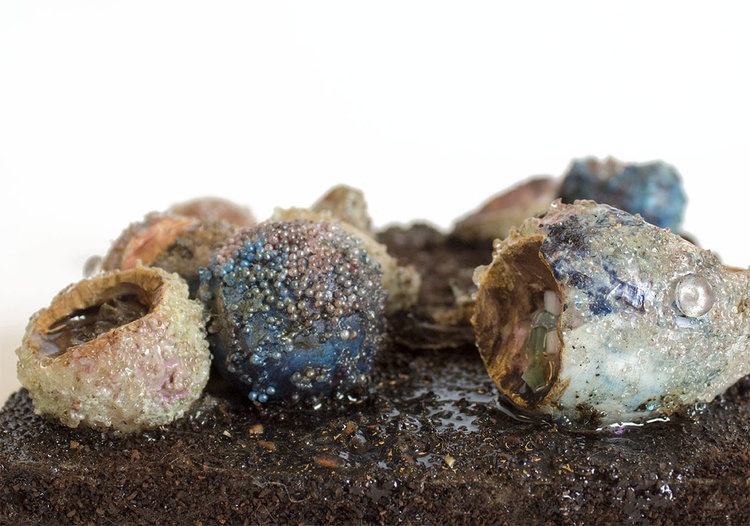 Why do you think Interact staff tend to stay with the center such a long time?

“It’s really cool to be able to come to work and work with other artists and also work on your own art and bounce ideas back and forth between the attending artists and the staff artists … We’re in the studio together, we sit together, we eat lunch together.”

What does Interact’s value of ‘radical inclusion’ mean to you?

“For the visual arts studio, I think it means giving everybody an opportunity to do what they want to do within their artistic career without limiting them because of their disability.” 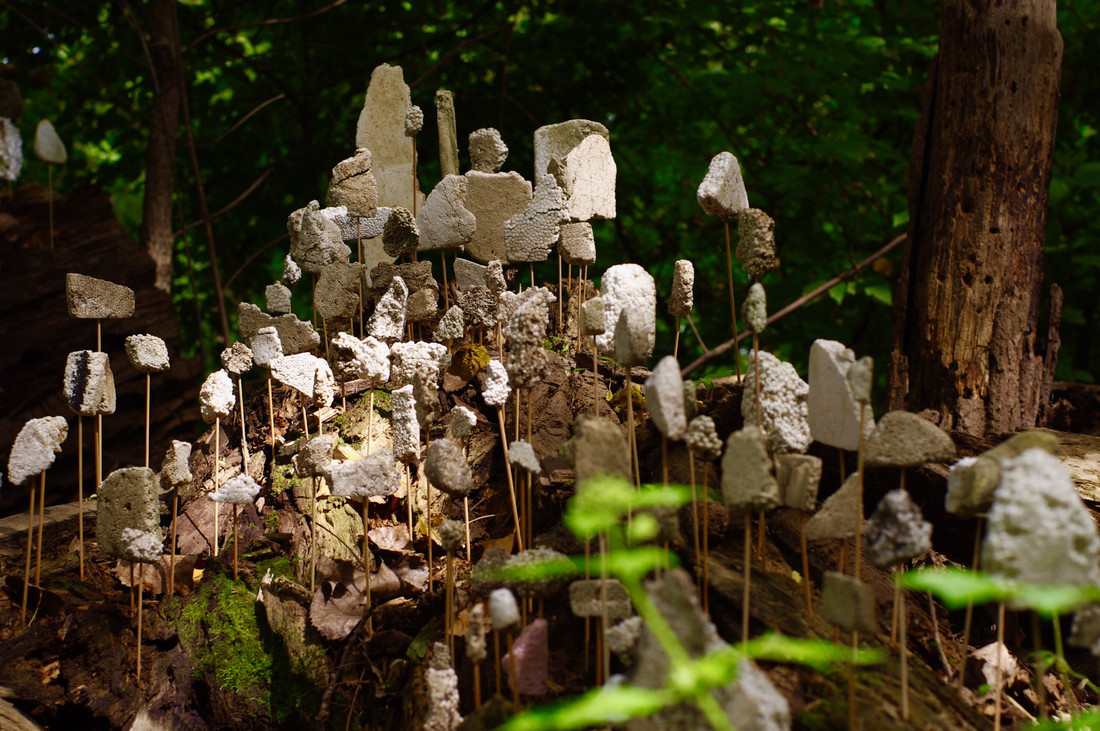 How long have you been involved with Interact?

“I’ve been a full-time instructor for three years, but I initially came as a volunteer five years ago … That’s sort of the normal way that staff comes here. They start as a volunteer, then they maybe are a substitute for a while and then they come on full-time.”

What is one of the main ideas you’re exploring in your work? 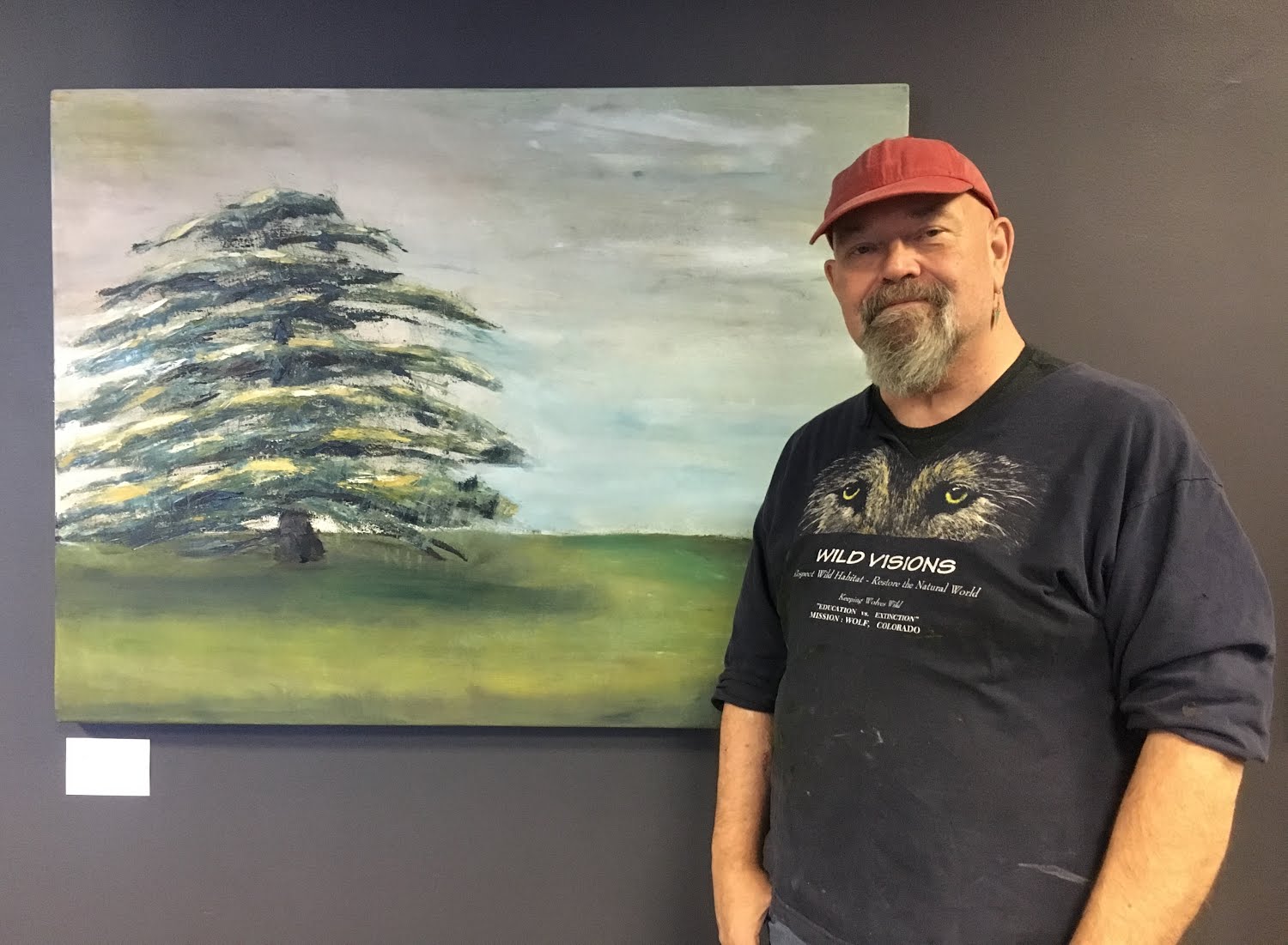 W.S. Norton at Groundswell. Photo by the author.

What have you enjoyed most about your time with Interact?

What do you feel is your purpose as an artist?

“To explore and to perceive. I see things so differently now. I did this painting of a lone pine tree, because I was on the bus and I just happened to turn and see this pine tree with a white sky behind it and it just hit me. When I came back, I just had to start painting that.” 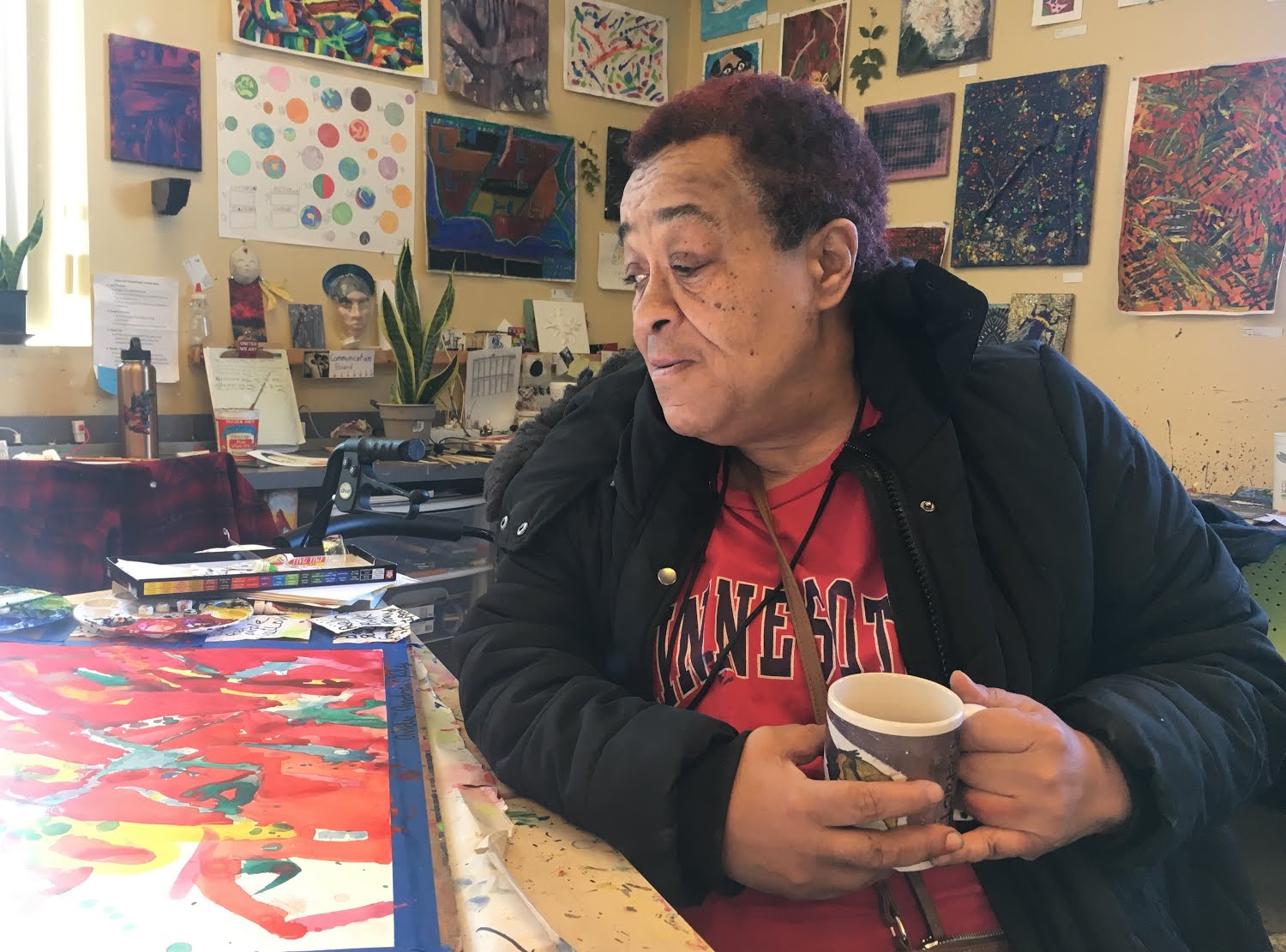 Andie Kiley at work in the studio. Photo by the author.

What is one of the main ideas you’re exploring in your own work?

“I just let my fingers do the painting … I write down four colors that will go into it, and I follow that for the most part. Sometimes, I have five or six colors in it, but mainly just four…

“Originally I started off in performing arts. It was just a question of curiosity — I tried painting and I’ve liked it ever since.”

Why do you write down the colors that you use? 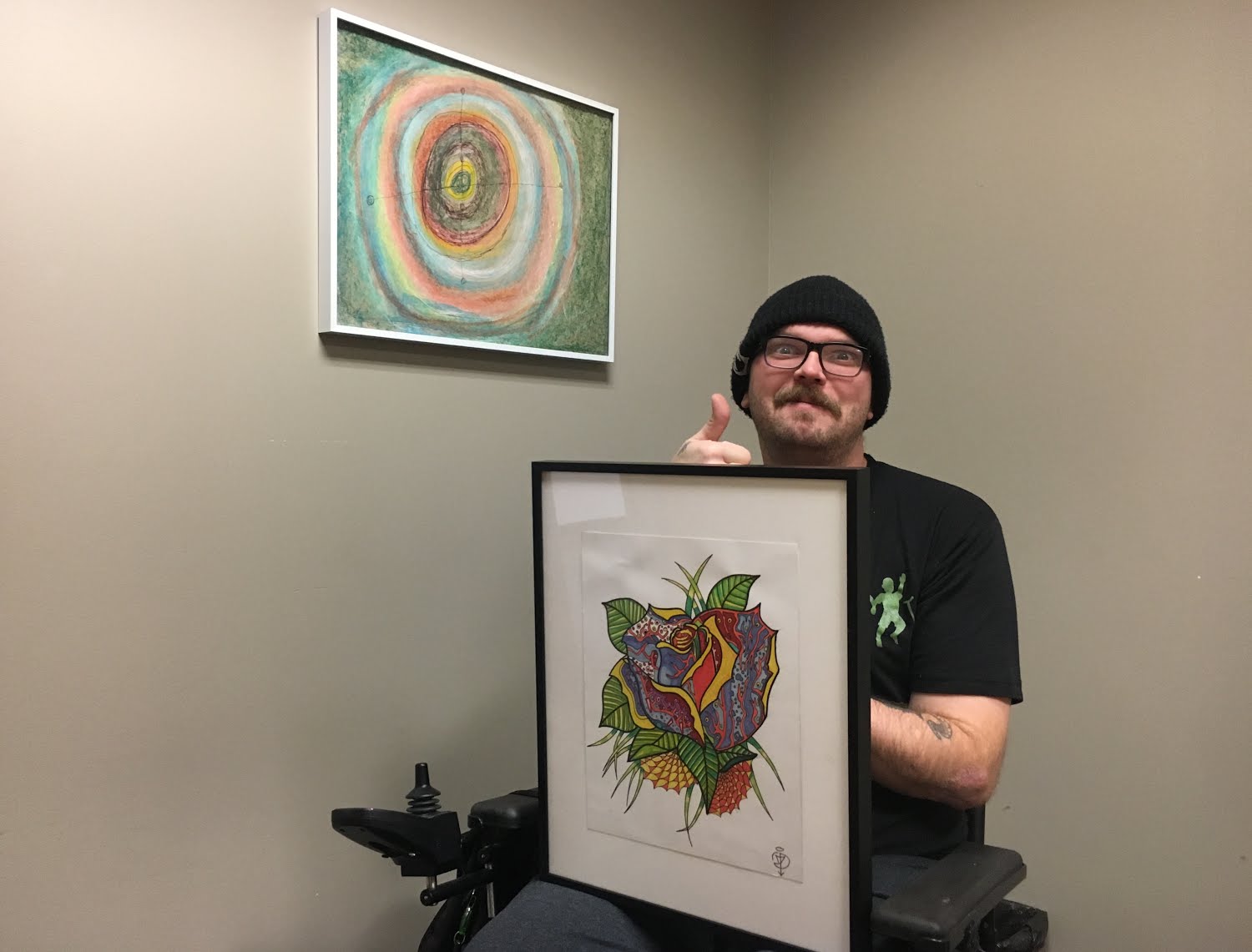 Zack Mohs at Groundswell. Photo by the author.

What are some of the inspirations behind your work?

“It’s inspired by graffiti and tattoo art. [For example,] I found an image of a line drawing of a tattoo-style rose and then started drawing it with my eyes closed, just to get a rough, abstract outline. Then I cleaned it up when I was done with the rest of it.”

Why do you sometimes start drawings with your eyes closed?

“I know I could reproduce the image pretty well, but I don’t like to. I’d rather have it different, in a way…

“Knowing that there’s no judgment here has inspired me to do pretty much whatever I want with my art. I was told right away, ‘Use anything you want to use, and if you need help along the way, someone will help you.’” 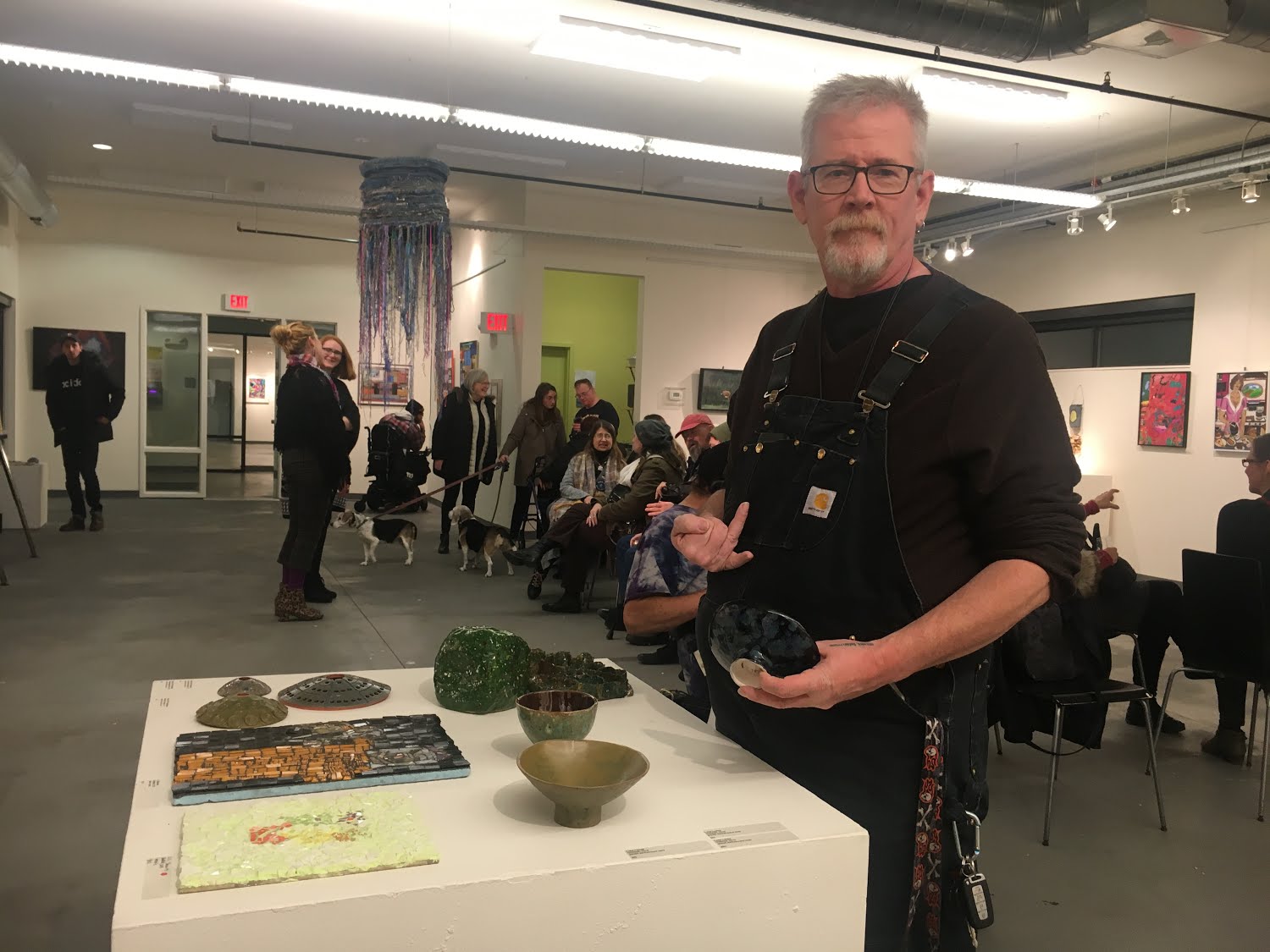 Luke Lyons at Groundswell. Photo by the author.

What process do you use to create your forms?

“Because of my physical disabilities, I can’t use the wheel because the wheel turns the wrong way. Our wheel is old, and we can’t reverse directions … I can’t roll out coils, because these hands don’t play nice. So, these are all bump molds. They’re from forms that we made with the prior instructor, so basically I roll out a sheet and then drape it over.”

How do you define being an artist?

“Making beautiful stuff that other people like. It really pleases me that other people look at it and have the same feeling that I do when I’m making it. Because, I don’t care how crude it is, I like my work. Every artist should.”