When designing one-hour river cruises for colleagues, acquaintances, and friends, a few local artists latched on to the same quotation about the peacefulness of moving water.

“It’s by a journalist named Hal Boyle," says artist Torey Erin. "He said, ‘What makes a river so restful to people is that it doesn’t have any doubt. It is sure to get where it’s going and it doesn’t want to go anywhere else.’”

Erin was one of four creatives invited by local artist Alyssa Baguss to design and facilitate hour-long boat rides aboard the Minneapolis Water Taxi as part of a new, open-ended art initiative called the Open Water Project. Baguss rented out the taxi — a solar-powered charter boat — and gave the cruise directors complete authority over how to create an audience and who to invite.

Outside of the ship’s six-passenger maximum and the ride’s duration, there were virtually no parameters for the expeditions, which took place from mid- to late September.

“You should be relaxing and having fun; it should be an experiment. It’s okay to play and fail,” Baguss says of her goals for the series. She hoped the Open Water Project would fill a void in the world of grant funding, which tends to focus on more product-based work.

“There are these really great grants, but you really have to identify exactly what you’re doing right now and fulfill that promise in the future,” she says. “Great things happen that nobody ever sees, and those are some of the most exciting things to me right now. What are people making that isn’t for a show, that isn’t for an audience?” 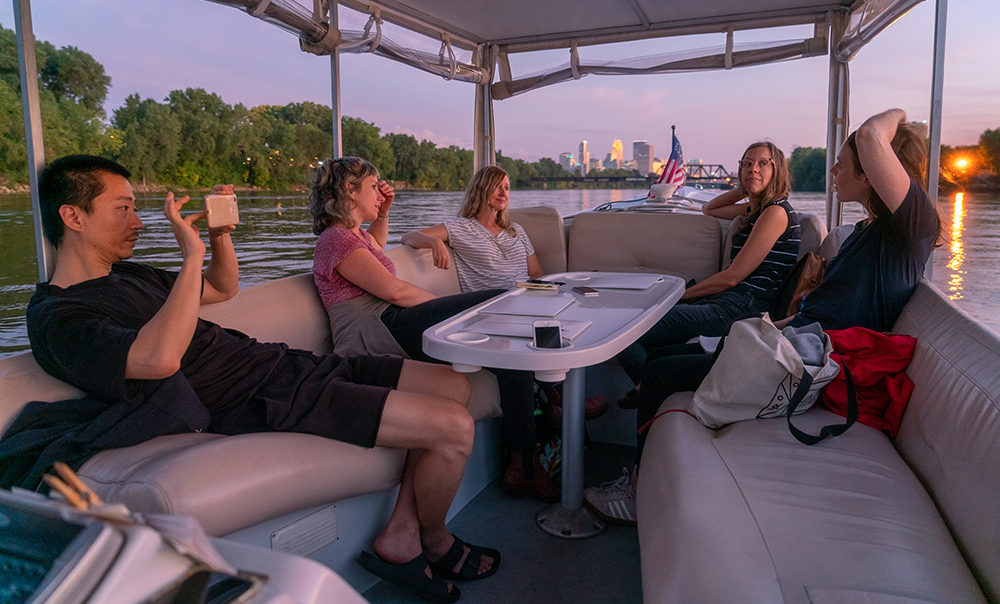 Participants on Torey Erin’s cruise settle into their surroundings and relax as the sun sets, before discussing the camera-less photographs they made as homework for the event. Erin, far right, sits next to Open Water Project director Alyssa Baguss. Across from them, participant Peng Wu takes in Erin’s cruise before directing his own less than a week later. Photo by Seth Dahlseid.

In choosing which four artists to invite, Baguss looked for people whose art she admired and who would be able to connect to and give feedback on the project. The majority of those who led cruises were already making work that would lend itself well to Open Water.

Peng Wu is a self-described social practice artist, who often engages the community through discussion-based work. During the ride, he invited everyone to share stories of rivers that had been meaningful in their lives.

“The majority of Asian civilizations originated from or by rivers. That's how human civilizations developed,” says Wu. “[This piece] aimed to raise people’s awareness of how much we have in common.”

In addition to discussing river-related memories, Wu also used the natural world as a backdrop for a 10-minute sunset practice. With the boat’s motor turned off, participants reflected on the river in silence. While some of Wu’s work involves a physical product, when creating on the Mississippi, he relied on the power and characteristics of the physical backdrop.

“In creating a structure, you enter it and you feel differently. Your activity inside is influenced by this space you’ve created, by the materials you use,” Wu says, of previous installation work. “With the Open Water Project, I think you already have a very powerful environment.”

Ellen Mueller, Director of the MFA program at the Minneapolis College of Art & Design, also chose to take advantage of the river’s natural setting in planning her cruise.

“The idea of using the boat’s natural relaxing environment to its greatest potential made a lot of sense to me," Mueller says. She explains her project as "holding a brief discussion about leisure as resistance, which is an area of academic scholarship that’s well researched and written about quite a lot, and then practicing being leisurely on the boat.” 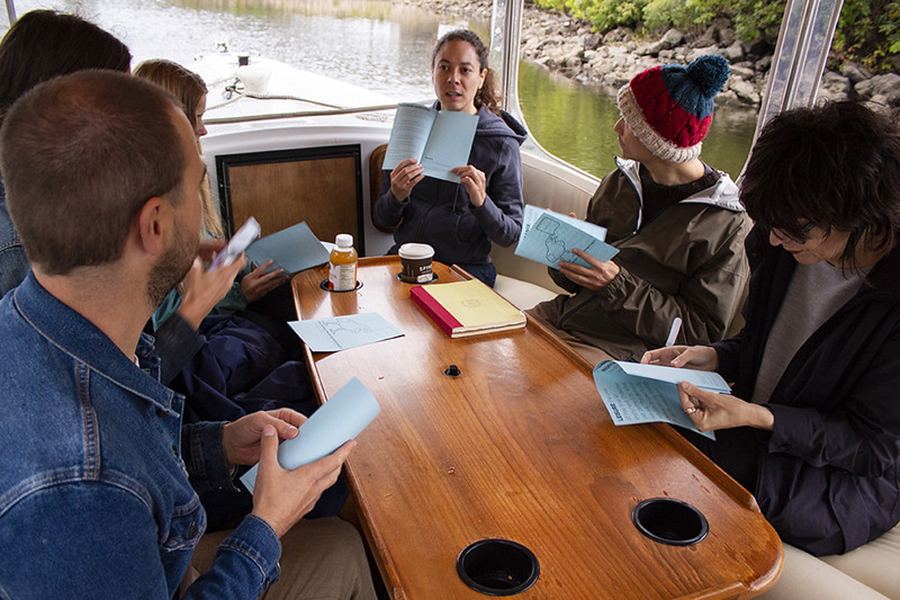 Ellen Mueller, center, holds up a zine she created on the topic of leisure as resistance. After introducing an overview of the subject, Mueller led the group in a discussion. Photo courtesy of Ellen Mueller.

Mueller brought along a documentarian on her cruise, whose sole job was to take photos that could then assist her in applying to future grants and residencies. For Mueller, there are ways in which artists can and cannot escape a product-oriented system, although she’s recently noticed a slight change in the valuation of social practice work among funding institutions.

Erin went one step further and recorded audio as well, so that she could retain more information on the event going forward. Prior to the night of the cruise, she had asked participants to expose a photogram on light sensitive paper, then describe the undeveloped image to fellow passengers on the water taxi.

While her initial intent was to develop the pictures in Mississippi River water, Erin says she’s now leaning toward keeping the pages blank.

“I think the idea of the the ephemeral or having this sort of happening and not necessarily having an object outcome feels important,” says Erin. “As each artist was describing their photo in detail, each one of us on the cruise had a different idea created in our minds based on our own personal experiences or perceptions.”

Similar to looking at a painting, every boater on each of the four cruises is sure to have a slightly different interaction with and recollection of their time on the taxi. For many, the experience will live on only in memory, something Wu says may have impacted the way participants processed their interactions on board the ship.

“I loved the fact that the artwork itself was a transitional and ephemeral moment. I think that made the experience more beautiful,” says Wu. “You paid attention to the story you told and to the stories other people told.”

The fourth artist, Ruthann Godollei, chose to send her participants home with a more tangible reminder of their journey. As a printmaking professor at Macalester College in St. Paul, Godollei played to her medium’s strength.

For her project, which was also intensely place-based, Godollei made stencils of native flora and fauna from along the riverbanks. She then collected samples of different colors of mud that participants could use to make stenciled prints on paper. 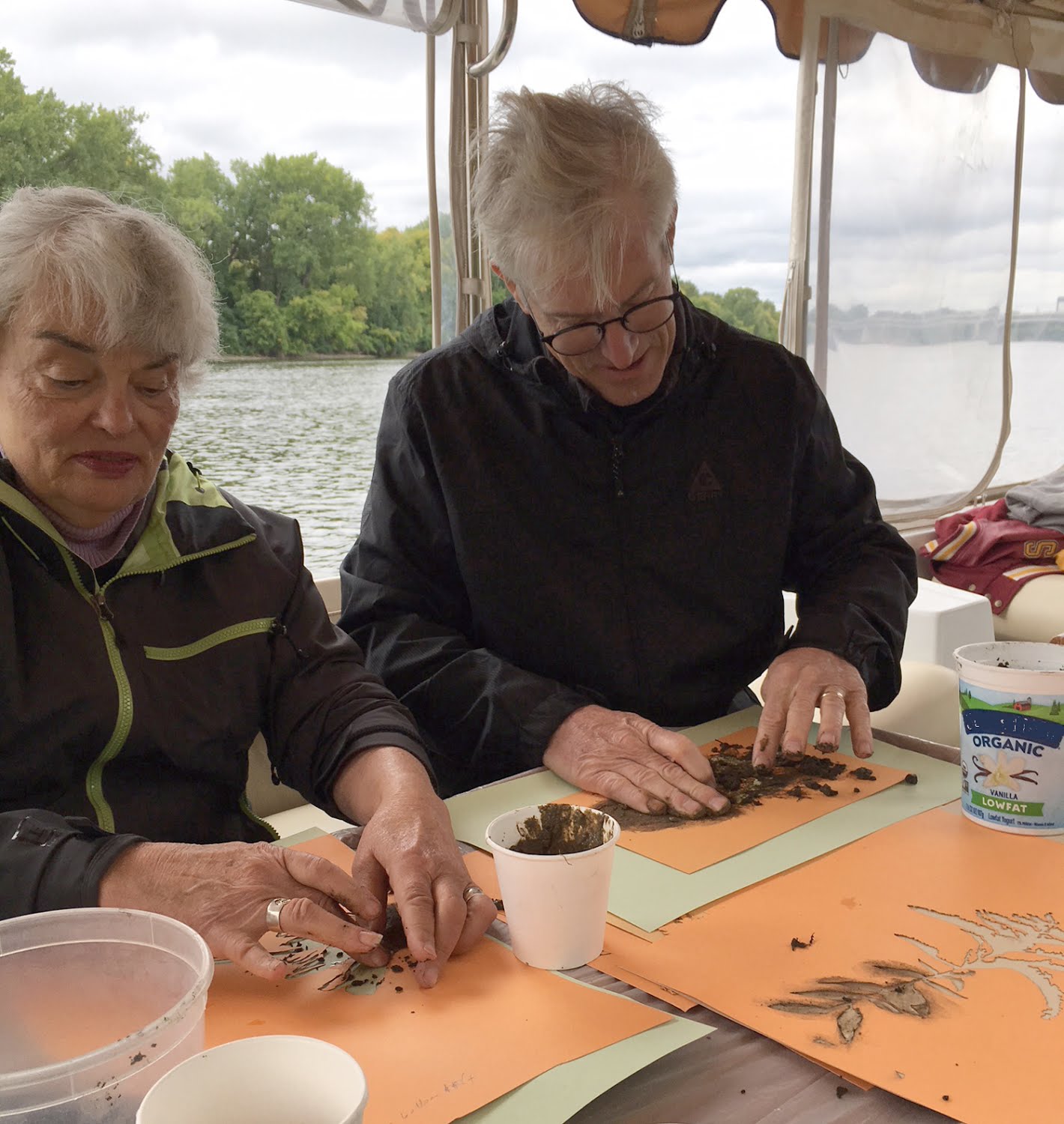 “Prints are one way you can keep something and still give it away, and everybody gets the same thing really. It’s got this generous aspect to it that I think is one of its virtues as a medium,” she explains.

In its essence, Open Water also strove to be generous, especially with its artists; Baguss rented out the taxi for each of the cruises, making the event free to those on board.

“It’s certainly not as democratic as a museum, and I’m okay with that because my focus was really on the artist,” says Baguss. “Maybe down the road these projects will lead to other things that are more accessible. I’m seeing, if I just focus on the artist, how does that then affect the audience later on?”

Still, Baguss said next year she may try to bring in people from other professions. “Maybe it’s not an artist at all. How would that change things?”

Another aspect of next summer’s programming that Baguss is grappling with is funding. She hopes to expand on this year's schedule, organizing eight to twelve rides throughout next summer.

“I want to continue this next year and think about, ‘What is the bare minimum I need to continue this sort of work?’ So that it can happen but that it isn’t shaped by the constraints of a funding source,” she explains. “I’m going to try and be honest and ask for what I really want.”

In addition to not requiring a tangible product, Open Water also seeks to create intimate experiences as opposed to reaching as large of an audience as possible.

“When we work small, sometimes that isn’t valued as much as working big,” says Baguss. “These small connections are so valuable because they ripple out. I hope this helps artists’ practices, or helps people think about the way they make their work.” 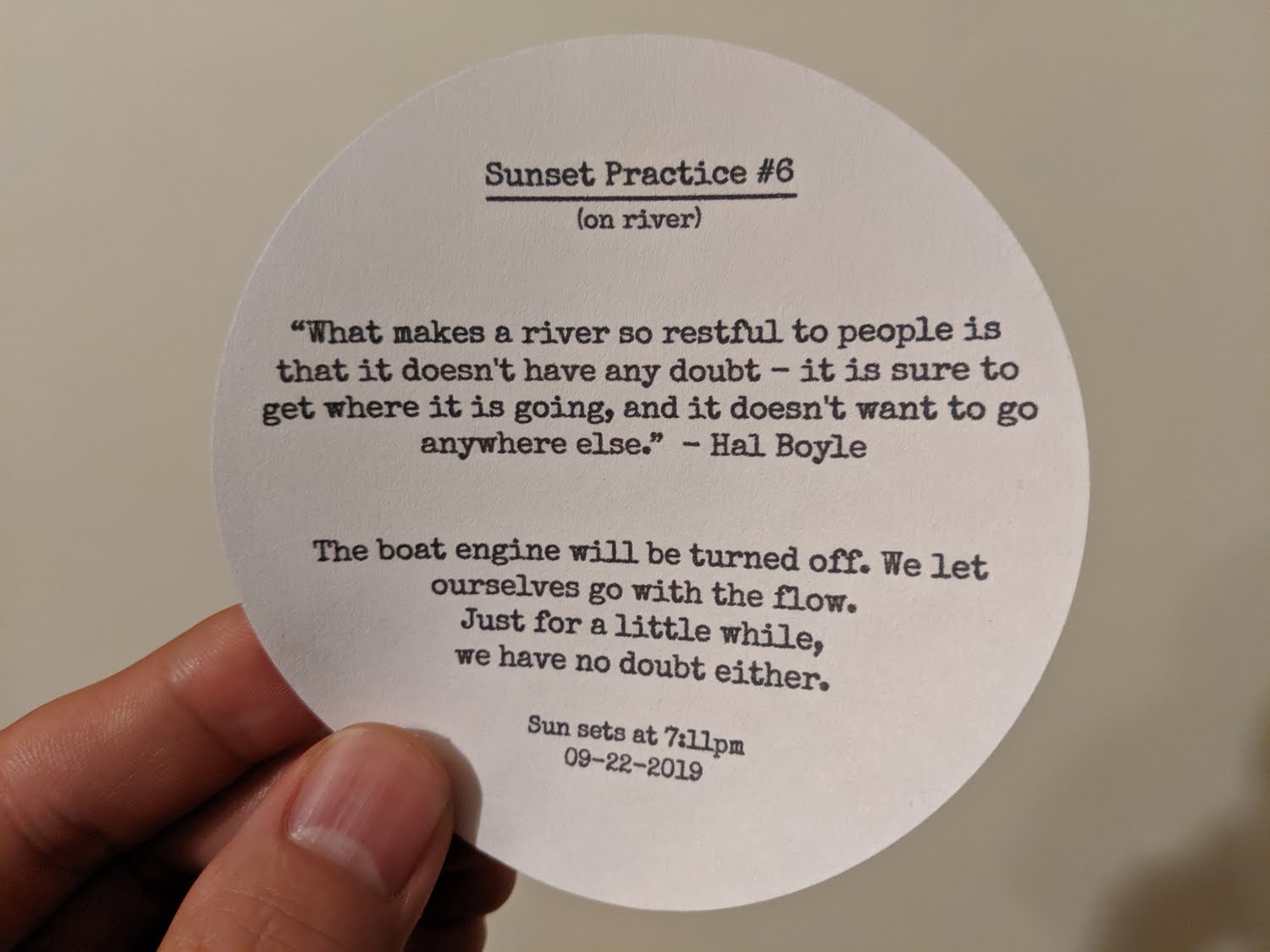 A quote on the tranquility of moving water by Hal Boyle resonated with Erin, Wu, and Baguss, who all took inspiration from it when crafting their cruise and interacting with participants. Photo by Peng Wu.