The Minneapolis-based artist takes a hard look at climate, farming, and hope in her solo show, up through May 4th.

There’s a lot of room inside a styrofoam cup, conceptually speaking. As art objects, they fit the bill perfectly: clean, white, simple, and solemn. As metaphors, they embody consumption and waste, resilience and fragility, impermanence and immortality. There’s the obvious, devastating knowledge that these little synthetic objects will outlast us all — biodegrading at best in five hundred years, at worst never — which is made all the more tragic by their status as “disposable,” both single-use and eternal by design. They are artifacts of a fleeting present, made from the fossil fuels of a distant past, and destined to litter the planet for the rest of time. The dinosaurs left their bones; we are leaving our trash.

In Alexa Horochowski’s Beautiful Sky, though, this kind of doom and gloom sneaks up on you. Your first experience of the exhibition is its soundtrack, a randomized chorus of hollow pings and pongs, like popcorn popping inside a drum, that will follow you throughout the show’s entirety. Turns out the noises are styrofoam coffee cups bopping around in a large, projected video, the pure white forms rolling and flipping against an austere black background. Central to this entire body of work is the idea of the vortex, which the artist has created here with a circle of industrial fans positioned off-camera, pointing inwards. The hapless cups are caught inside this closed system, viewed from above as they're carelessly flung about. The result has a stark sort of playfulness, on its surface as nonchalant and inoffensive as a desktop screensaver. But the show soon turns more serious.

As a whole, Beautiful Sky is a visual meditation on mankind’s relationship to the earth, using scale, material, and found objects to illuminate the tension between our control over nature and the chaos we inevitably unleash. Cups and water jugs cast in plaster and coated in salt sit on pedestals like far future artifacts, the X on the side of one five gallon jug raised in low relief like a calcified crossbones. Massive erosion control logs dominate another room: some two dozen ten-foot-long brown tubes, woven and stuffed with coconut fiber by workers in Sri Lanka, hang from the ceiling and lay piled on the floor. Wrapped in fibrous chain-link netting, the tubes have been frankensteined together in some spots and sparingly disassembled in others but remain otherwise unaltered. They stand and lay impassively, an alien mixture of Eva Hesse and industrial land management, readymade sculptures demonstrating our own individual smallness in relation to both natural forces and global trade. Despite their size, they are also among the least permanent items in the entire show, with a shelf-life of only three years out in the world.

Yet another room is devoted to a single ten minute video, a Koyaanisqatsi-esque study of irrigation efforts at Owens Lake in California. Back in 1913, the Los Angeles Department of Water and Power diverted water from the river that fed the lake, sucking it completely dry in only thirteen years. The lakebed, barren and desiccated, soon became the single greatest source of dust pollution in the United States, and recent years have seen attempts to mitigate the problem by literally watering the lake. The images of spigots spraying water in slow motion against a brilliant blue sky are gorgeous, absurd, and heartbreaking, especially when overlaid with the video’s eerie, sci-fi soundtrack. But Horochowski reserves most of her attention for the giant white bags of sand used to shore up the workers’ roadways after a particularly rainy 2017. Shot in sweeping pans and projected gigantic on the wall, the countless white sandbags sit stoic against the blue sky like Christo-wrapped clouds or floppy Oldenburg gravestones, holding erosion at bay while the ground a few feet away is pumped endlessly with water. There is a hint of comedy in this set-up, but Horochowski doesn’t give us any reason to laugh. The background is postcard perfect, the foreground a bleak study in human folly.

Other sculptural objects in the show speak to farming, shipping, oil addiction, and the politics that tie them all together. A row of puritanical pitchforks lean against one wall, their devilish steel tines coming to vicious points, an American Gothic as much about mob rule as the work of baling hay. Across the hall on a shelf are three Farmer Caps cast in bronze, their embroidered logos still barely legible: Asgrow, John Deere, and Make America Great Again. The first, a Monsanto brand of bioengineered seeds; the second, the maker of earth-movers large and small; the third, a dog whistle for bigots and a bullhorn for suckers. Taken together, these hats tell part of the story of white America’s delusional self-mythology — symbols of a spiteful nostalgia, a corporate kleptocracy, and a resourcefulness gone sour. Further down the hall hang strings of used car lot flags, wavy triangles cut beautifully out of black steel. Again there’s a pointed sense of permanence to these objects, until you reflect that the real life plastic flags they mimic may actually last just as long. 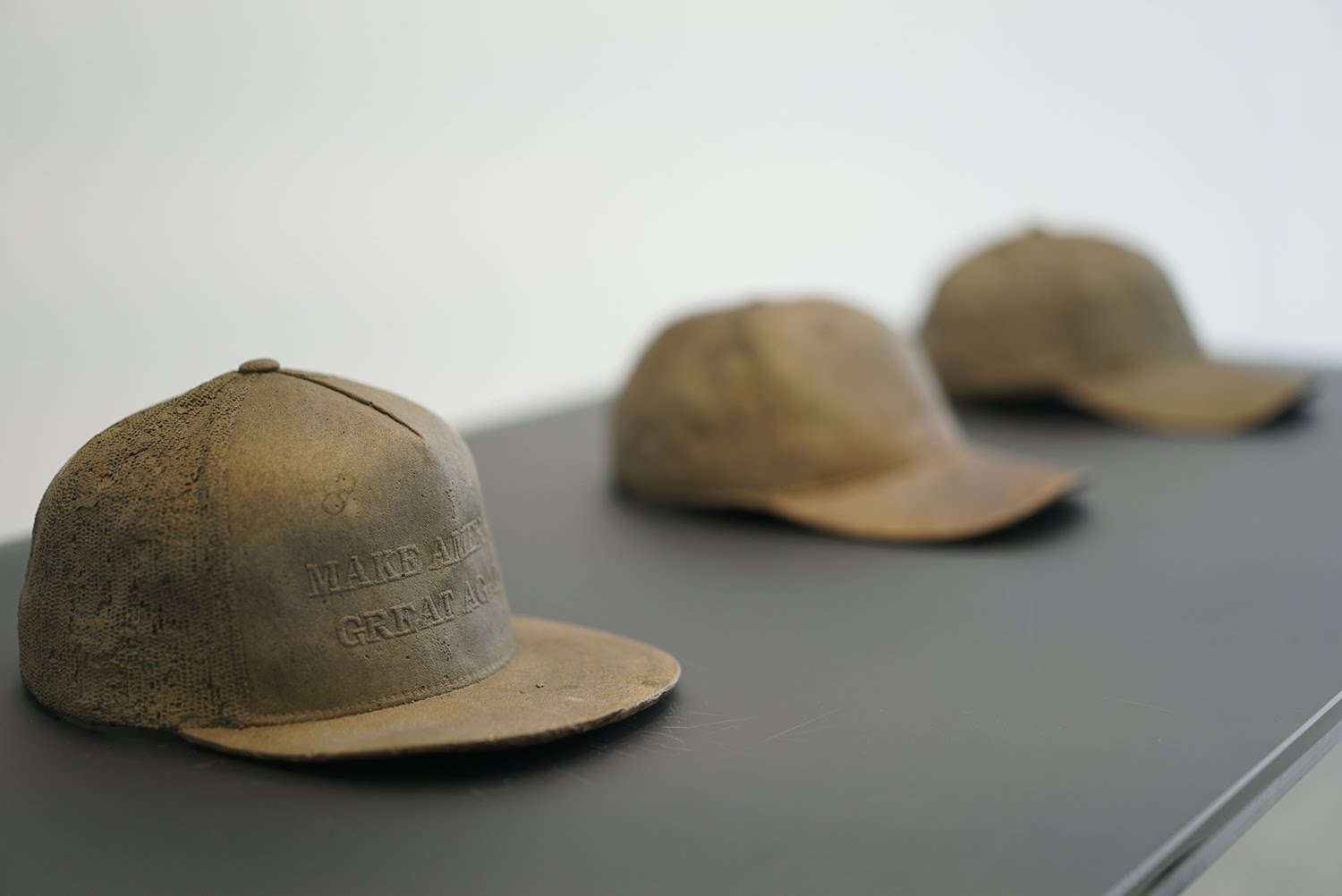 But the artist’s simplest construction here is still her strongest. Scattered throughout the exhibit are her Vortex Drawings, the visual records of her experiments with fans and styrofoam. Eight feet tall each, the drawings are hazy clouds of various densities made of up stray marks and splatters from coffee cups coated in ink and caught in a wind tunnel. In each drawing’s list of media, the accompanying didactic describes these objects as “Polystyrene cups (performers),” a funny bit of agency to give these helpless items. The artist has established the parameters, chosen the actors, and then let the laws of physics take their course. The drawings are wild and sparse, frenzied documents of the butterfly effect inside a whirlwind. Another short video offers a mesmerizing glimpse at the process: a dark mass of polystyrene packing peanuts swirling on the floor of a warehouse, churning like a convex Charybdis inside the perfect balance of external forces. One adjustment of the fans and the whole system would fail.

As you leave the exhibition, the ping pong of the styrofoam cups follows you out, now more unsettling than inviting. There is a hopelessness you might feel, a kinship with the cups. But this show is not about loss, it’s about struggle. It’s not about failure, it’s about consequence. Life in a closed loop has no guiltless parties, but no powerless ones either. 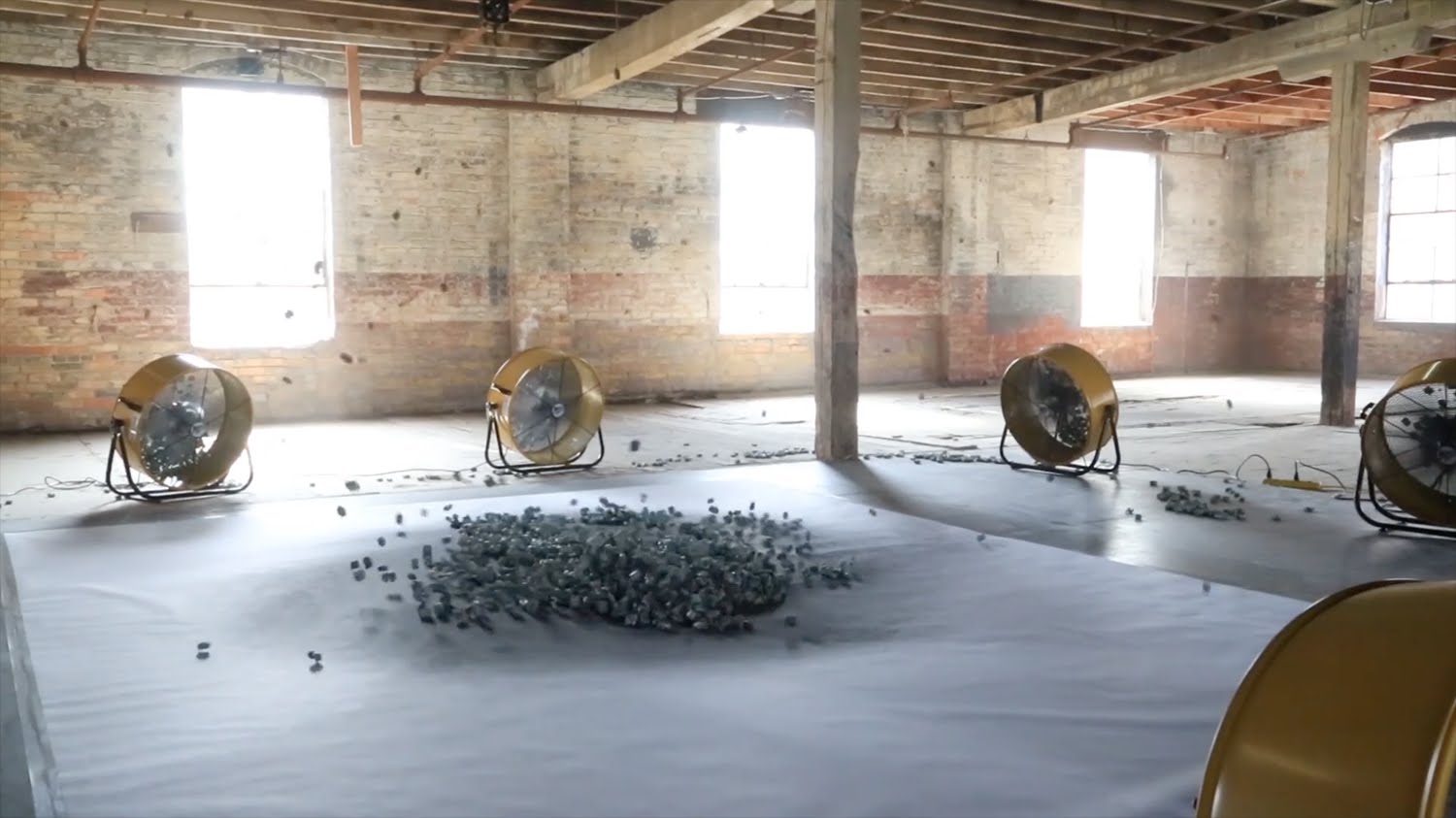 Beautiful Sky is on view at the Rochester Art Center through May 4th, 2019. For more on the artist's work, visit alexahorochowski.com.