It’s 2:30 p.m. in the Jordan neighborhood of North Minneapolis. Children sprint home from school, backpacks trailing in the wind. A bus driver takes a sharp corner, narrowly missing a median labeled “Jordan Block Club Beautification Project, 1993.” Signs line 26th Avenue North: “Jordan Area Community Garden,” “Youth Farm.” Up on the boulevard, next to a repaved sidewalk, is a bikeway added as part of the street’s 2017 renovation.

A few recent additions have just been installed along the new path: three sculptures designed by prominent local artists with strong ties to the community. Back in 2015, the city’s Public Art Advisory Council selected the 26th Avenue North renovation to have an accompanying public art project because of the relative lack of public art on the Northside. Eight semifinalists were chosen to attend a two-day, paid workshop where they developed design concepts. Then a selection panel comprised of community members, city staff, and other key stakeholders selected three artists—Christopheraaron Deanes, Christopher E. Harrison, and Esther Osayande, all members of the ROHO Collective—to bring their designs to life.

“We selected artists that were … pretty established as artists but maybe new to doing sculptural work,” explained Mary Altman, Public Art Administrator for the City of Minneapolis. “We actually created a series of workshops for them to participate in, [with] an expert for them to talk to prior to the development of their design to help build their capacity.”

One of the main goals for the final sculptures was that they would be places for residents to gather, building on the deep history of community organizing on the Northside. All three artists chosen had spent considerable time in North Minneapolis and were familiar with, as Osayande put it, “the dynamics of the community.”

The bikeway begins where 26th Ave N leaves Theodore Wirth Regional Park, heading east, turning from the wide, tree-lined parkway into row after row of clapboard houses and ultimately reaching an industrial park on the Mississippi. At the bikeway’s entrance stands Christopher Harrison’s Aqurbane, an archway that symbolizes a union between natural and man-made elements.

Harrison’s paintings and sculptural works often take their form from microorganisms and biomorphic shapes. Aqurbane is adorned with similar figures, hand-painted by Harrison with a dioxide patina that will morph and wear over time, heightening the industrial aspect of the work. He hopes the archway is something that people in the community will use in their daily lives, as well as something they will revisit through the years. 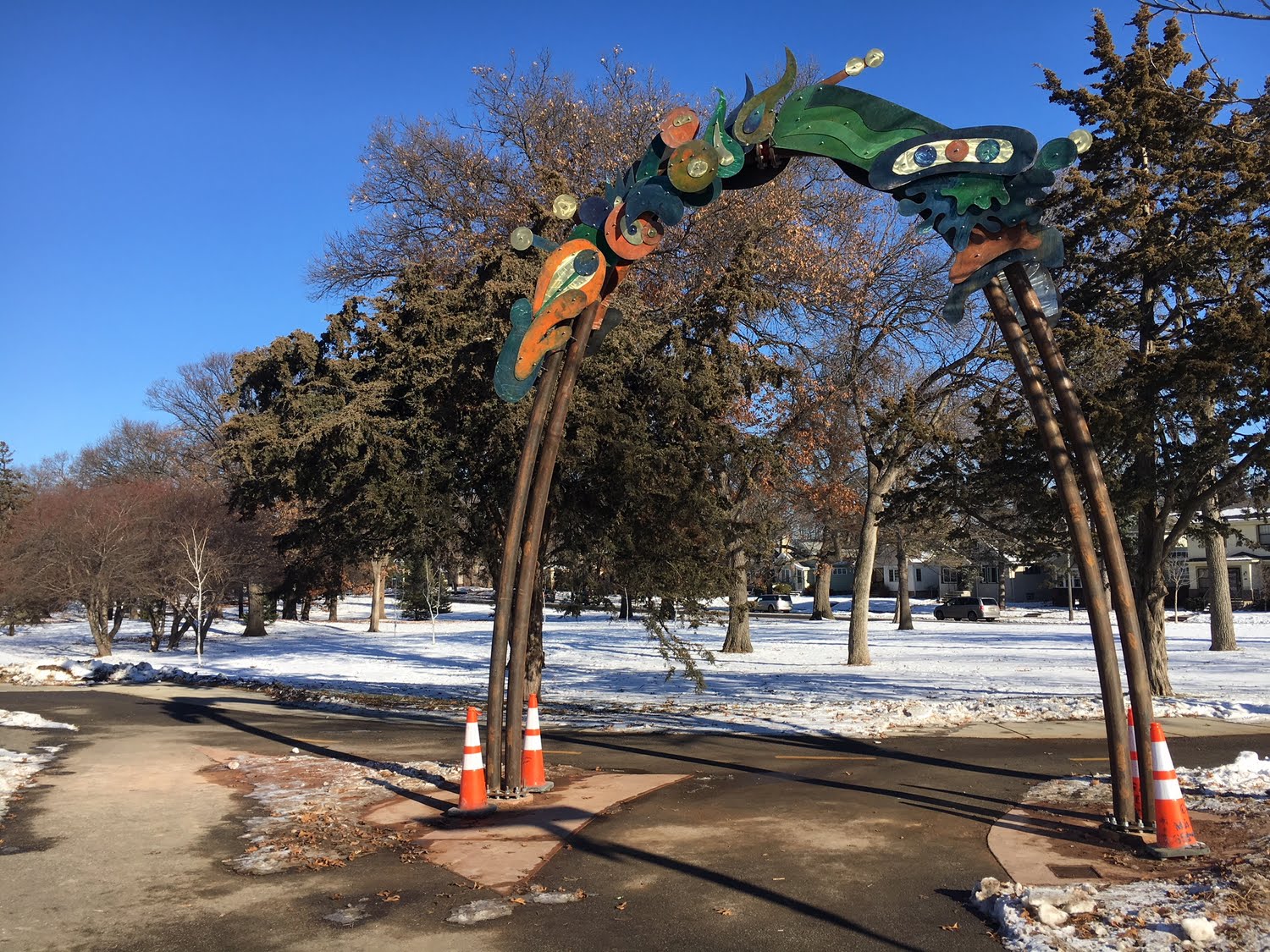 Harrison's Aqurbane archway at the entrance to the 26th Ave N bikeway. Photo by the author.

“Hopefully it can be a little place where people can meet up,” he says. “Somebody can say ‘Hey, meet me where that sculpture is!’ and then ride the rest of the bikeway.”

He also hopes that the naturally inspired shapes on the archway can serve as a guide for residents to look more closely at the environment.

“I used organic shapes and the whole idea of science … little animals and plants and flora and fauna, trying to make that into something that people can actually physically experience when they’re out there,” Harrison said. “Hopefully it’ll give them cues to look a little closer at things when they’re outside and to really enjoy nature.”

Further east along the bike path, outside of Nellie Stone Johnson Community School, stands the Big Book, Deanes’s sculpture depicting two hands holding an open book, with a story enameled on its pages. 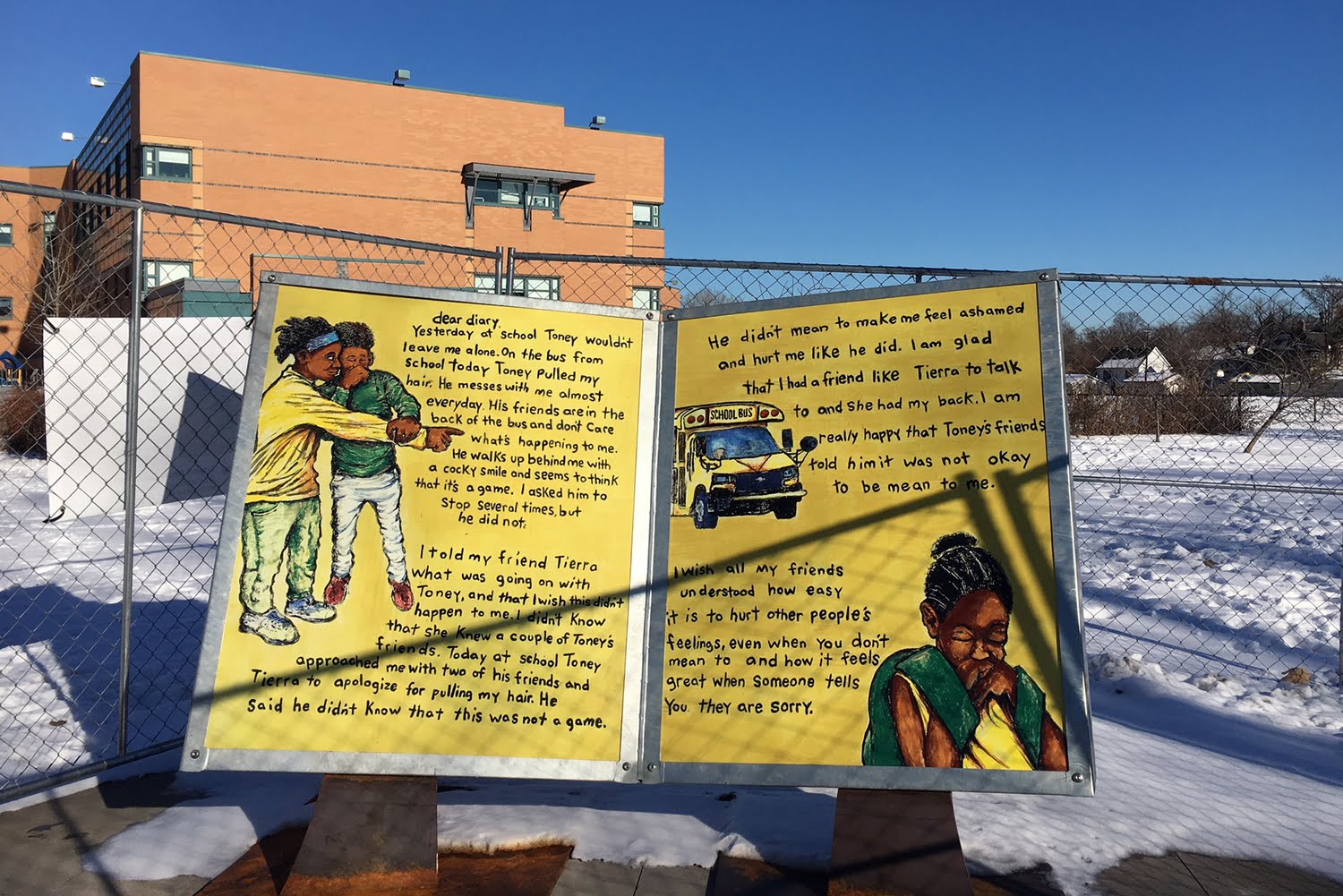 “I actually went into the school, and I worked with the fifth graders,” said Deanes, a longtime educator and Assistant Principal at Perpich Arts High School. “The kids actually helped me develop the identities and characters.”

Deanes aims to promote a lens of empathy and community through his work; he hopes that the story, which centers on bullying, will be an opportunity for social-emotional learning. 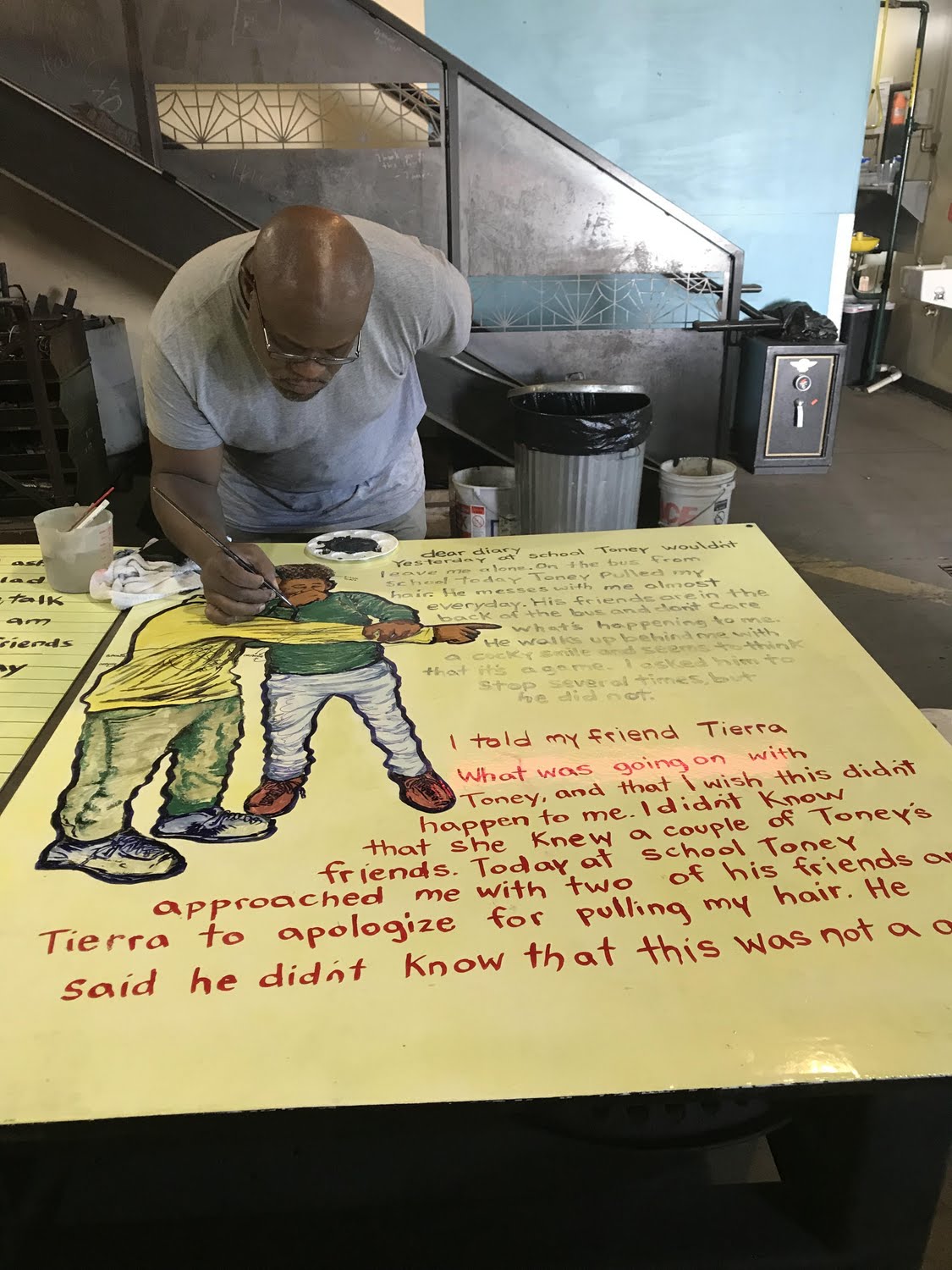 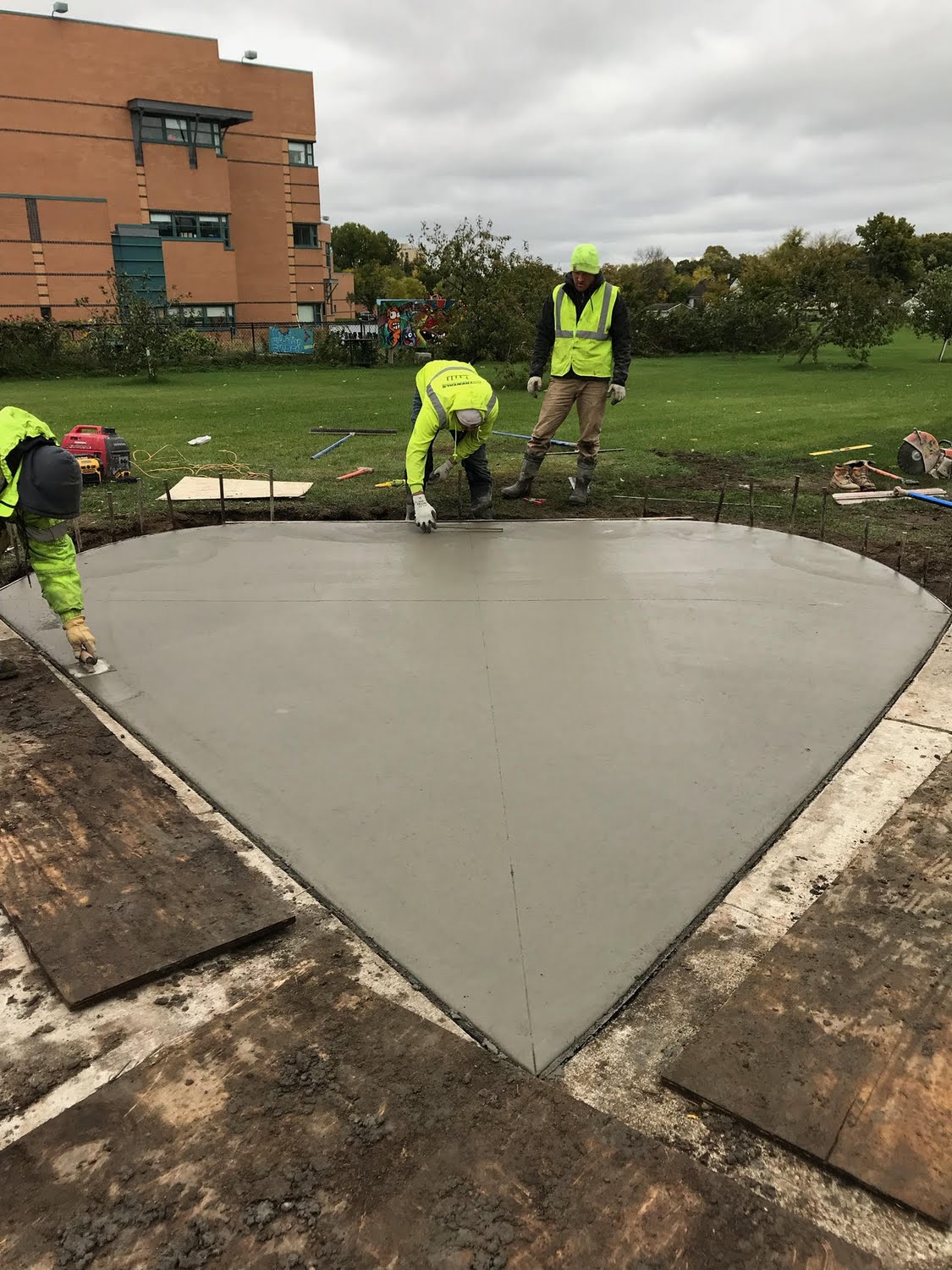 Pouring the concrete base for Big Book.

A block east of the Big Book stands the third and final piece in the Assemble Project, Osayande’s Purple Raindrop located in Fairview Park.

“It’s not the exact neighborhood that Prince grew up in,” Osayande explained. “But it’s in the community that he was in.” 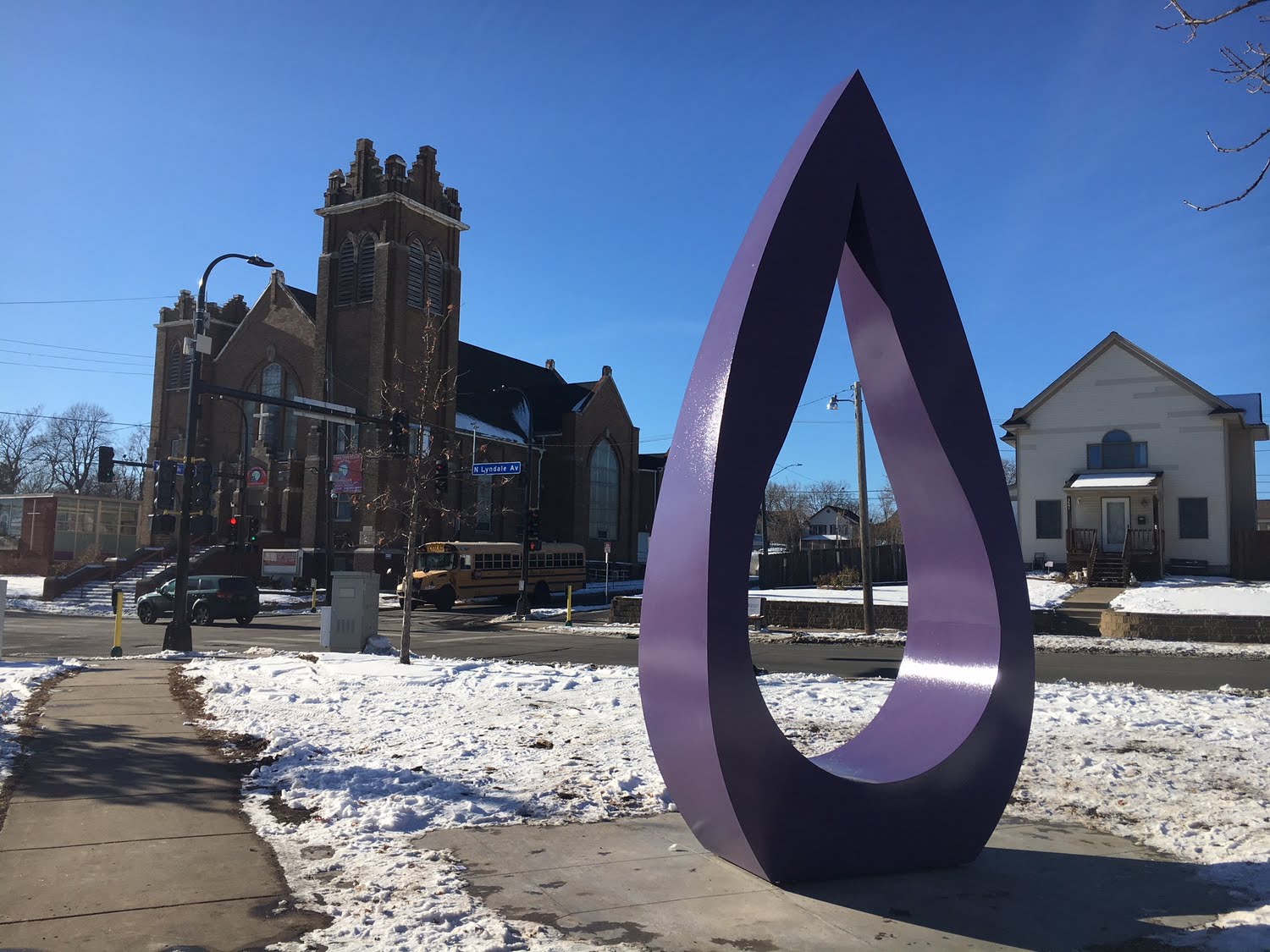 Doubling as a park bench, Osayande hopes that Purple Raindrop will be a gathering place for the community, a place that will become a lasting part of residents’ everyday lives as well as a memorial. Having been to many events in Prince’s honor, she is happy to be able to install a more permanent tribute.

“It is going to be there every day. You can go home and come back tomorrow. To me, it’s just a stronger, a more powerful, way of keeping his memory alive,” she explained.

The source of the idea for Purple Raindrop verges on divine intervention. It was in the spring of 2016, shortly after Prince passed away. Osayande was waiting to take the bus home from the Assemble Project workshop and, while standing at the corner of 7th and Hennepin Ave. downtown, she heard First Avenue begin playing “Purple Rain.”

“The cars started honking and playing ‘Purple Rain’ on the radio,” Osayande recalled. “I just thought ‘Wow, is that a sign or what?’ All I saw in my head were these purple raindrops.”

All three artists hope the Assemble Project will be a point of pride for Northside residents. It’s a way to call attention to the incredible amount of talent in the community, as well as a show of recognition on the city’s part towards an area that has been consistently underserved. In Osayande’s words: “It’s about them having something. And they deserve that.”

Harrison described the sculptures as “something that the neighborhood can own, the community can own.”

“It’s like David and Goliath,” Osayande explained. “You’ve got a few committed people in your neighborhood trying to keep hope alive and then you have the giant media and other communities trying to put it down. It’s just always been that struggle and so these art projects are really designed to uplift and bring a positive light to the community.”

Deanes shared a similar view: “I think about revitalizing perceptions of people of color. Far too often we’re thought of as less than.”

Soon, as spring comes and residents are again able to spend more time outside and gather in parks, these three sculptures will be there as unique meeting places, points of interest and opportunities for dialogue. Those same students running with backpacks home might linger with family members in front of the Big Book, meet friends for a bike ride under Aqurbane, or listen to Prince while perched on Purple Raindrop. In a few years, hopefully they will be adding monuments of their own.

The three sculptures that make up Assemble are on permanent display along the 26th Avenue North corridor. To learn more about the project, visit minneapolis.gov. All photos courtesy the artists unless otherwise noted.