The iconography of Christian orthodoxy and western fashion collide in a show of mixed media portraits of women.

Local artist Natalia Berglund’s painting and mixed media collages sit at a crossroads, culturally and personally. For her solo exhibition at the Museum of Russian Art — on view now through September 23rd — Berglund fills the museum’s lower level gallery with images of women undergoing varying levels of empowerment and transformation. Her images combine iconography from both contemporary American fashion and Russian religious art as a way to grapple with the conflicting concepts and roles that women encounter and use to form their identities.

While Berglund’s collage works use the stoic faces of fashion models, her latest series of paintings are portraits, titled after her models. Many of these works are similarly titled, referencing warriors. “At first, I was seeing each piece as a reflection of a single person, fighting her own daily battles and navigating through life with determination.” Berglund says of the earlier images which, while balanced in composition, feel frenetic and show the artist’s hand and energy in larger brush strokes and water stains. These warriors come across as almost masked by their own sensuality, the ubiquity of their makeup and conformity to a contemporary standard of beauty. They are on the defensive, their struggle elegantly abstracted by ink and gold leaf. These works, while full and complete, feel like warm-ups for the direction Berglund took next. 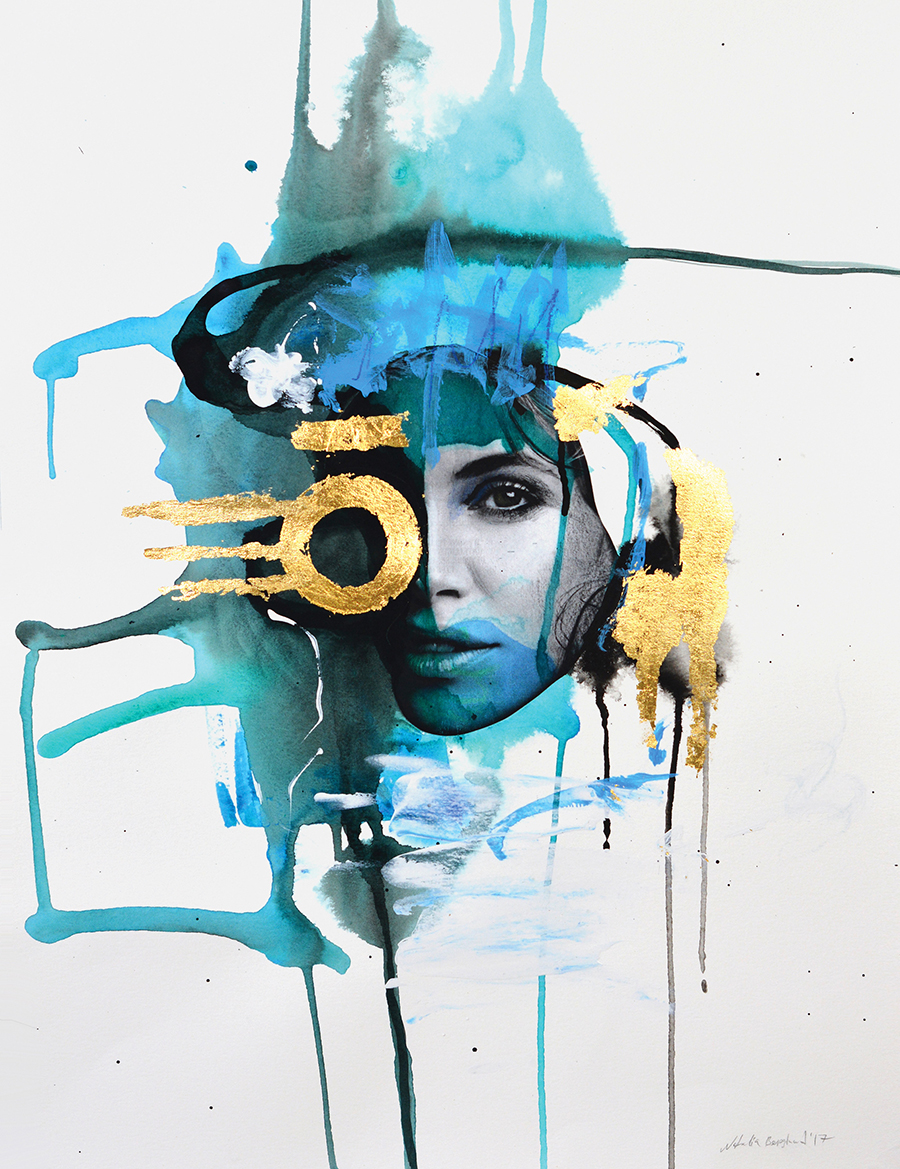 The artist drew inspiration from a previous show at the Museum titled Russian Sacred Art: Connecting Heaven and Earth. The exhibition was not only an artistic inspiration but a reminder of the artist’s personal experiences growing up in the former Soviet Union where religion was effectively outlawed as the “opium of the people.” Berglund’s most memorable experience of the intoxicating aesthetics of religious art was during art school while studying plein air painting and wandering into the church her class was painting. “I remember its opulent interior with icons, gold embellishments, dim lighting, and candles,” the artist recounts. “I have always admired icons as an art form for their stylized representation of people, powerful symbolism, and ornate beauty.” It’s no surprise then that she is also drawn to the world of fashion, which use those same tools and can be just as enticing.

In the wall text for the show, the work is described as seeking a harmony between the two types of icons — fashion and religion. Three of the paintings go about this in a direct and assertive manner, collaging images of traditional Russian religious icons with the black and white faces of female models aggressively splashed across the face of the original figure. Other paintings, such as the Shielded Warrior series, combine modern portraiture with the classic aesthetics of red and blue drapery and gilded embossment. Here Berglund’s interests in religious art and fashion imagery begin combine in more subtle and intricate ways. No longer are the warrior women fixing us with their steely gaze, nor are they entangled in the painterly battles. 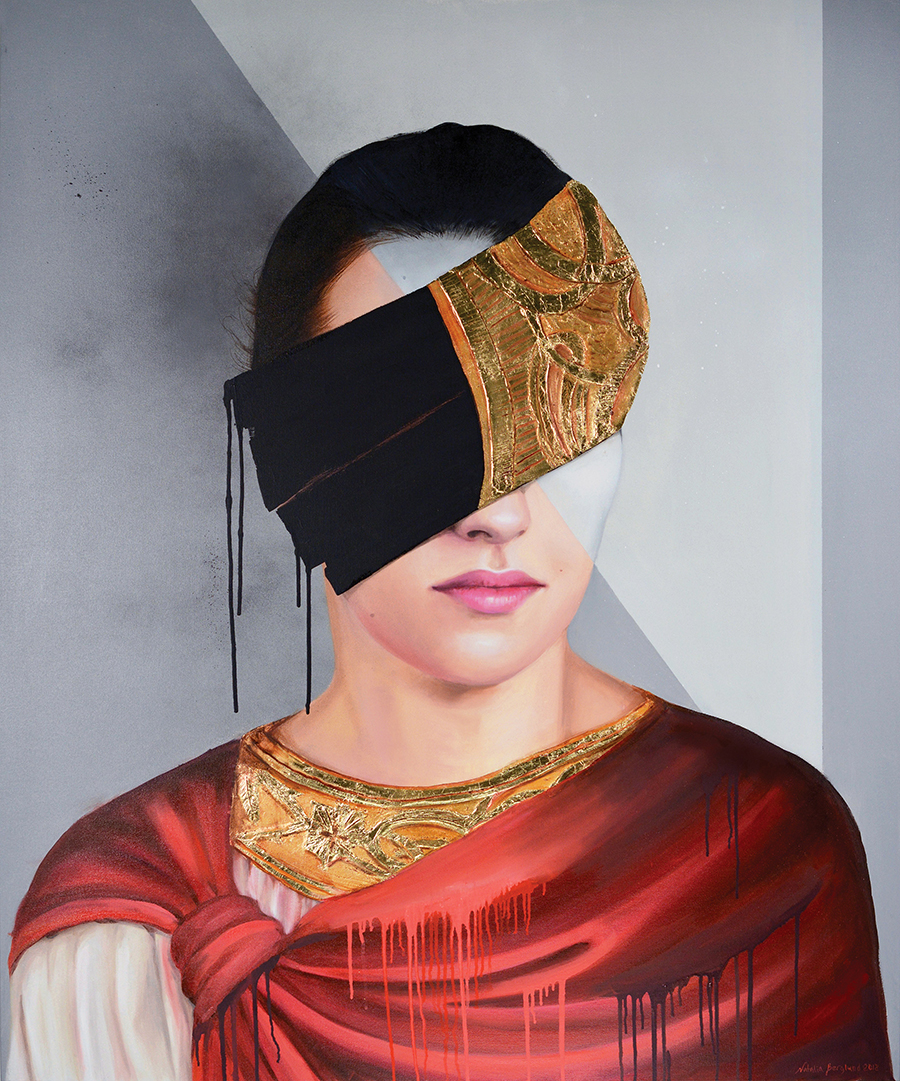 “With this series, I am exploring how we can rationalize or come to terms with some of the conflicting aspects of our personalities, such as strength and fragility, femininity and masculinity, or deeply caring about certain issues and being blind to others,” Berglund explains. “All of these conflicting identities make us who we are.” In these portraits, the battles are no longer with an outward opponent: voting rights, equal opportunity, the wage gap… The battles are now internalized. The Shielded Warriors turn their gaze away from us, perhaps at some looming conflict on the horizon. Those who might otherwise stare back at us are blindfolded or capped by intricate gilding and slash-like brush strokes. Only Nina looks out toward her audience, but it is clear that her attention is elsewhere, her gaze distant and unfocused. These warriors are shielded from their viewers and from the rest of the works in the exhibition as though the content were too much to take in. Even as they sit seemingly self-composed, there is a tension created by Berglund’s use of both color and grayscale, dripping and aggressive brush stokes, and colorful graphic elements which often allude to halos. 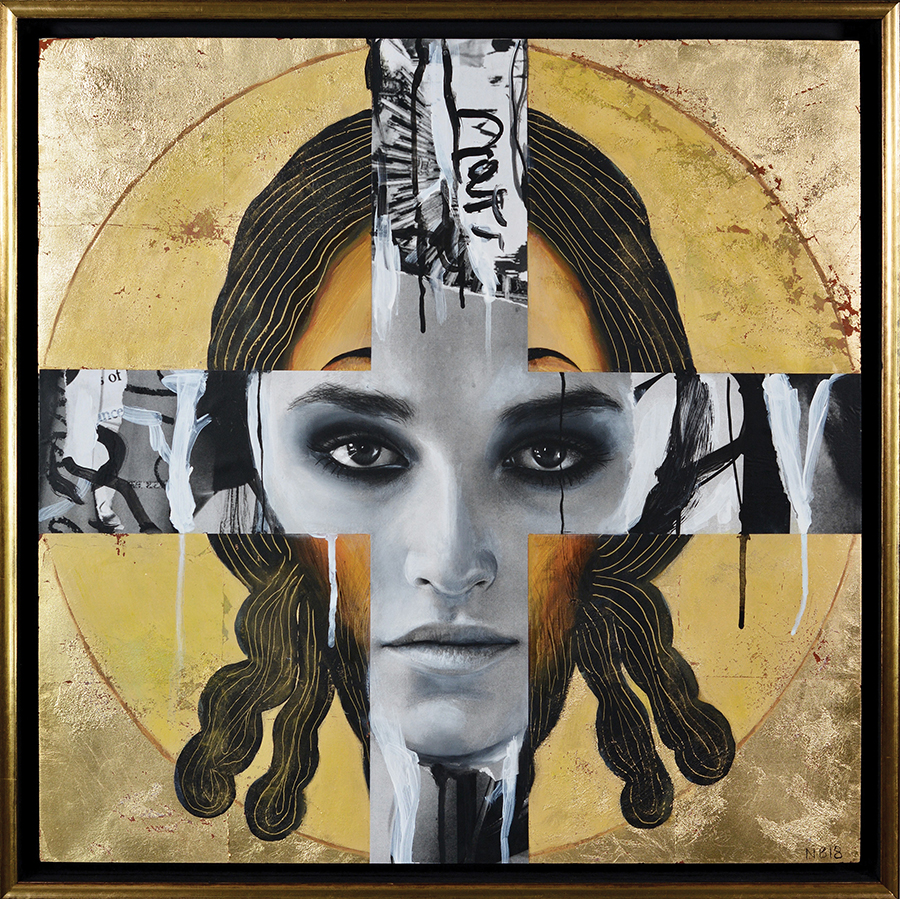 The exhibition is rounded out by a soundtrack composed by the artist’s husband, Alexander Berglund, specifically for these works. The music combines the familiar chants and church bells of religious music with the echoing sounds of high-heeled footsteps. The resonating soundscape builds with techno beats and synth swells that mingle with the choral vocals and chirps of crickets. It seamlessly brings together the artist’s old plein air sensibilities with her new contemporary voice, knitting together her early themes from sensual fashion figures with the power of the religious paintings that inspired her.

Overall the exhibition, while themed around warriors and empowerment, feels like a vulnerable look into the artist’s growing understanding of herself. No piece expresses this more than a small watercolor titled Gasp. A female head rises as if out of inky waters, her gold leafed lips part just above the dark surface. “I’ve spent the past few years experimenting with different styles and mediums, trying to find my voice as an artist,” Berglund says. “I feel that this body of work unifies a lot of different aspects of my own individual identity; the artistic traditions of my ancestral past, the constructivist elements of my Soviet childhood, and the omnipresent fashion imagery of contemporary America.” Perhaps it is too simplified to see the gasping figure as a kind of self portrait. Nonetheless, it is satisfying to see her as Berglund coming up for air with new works, the compilation of much thought and personal artistic contemplation and growth. 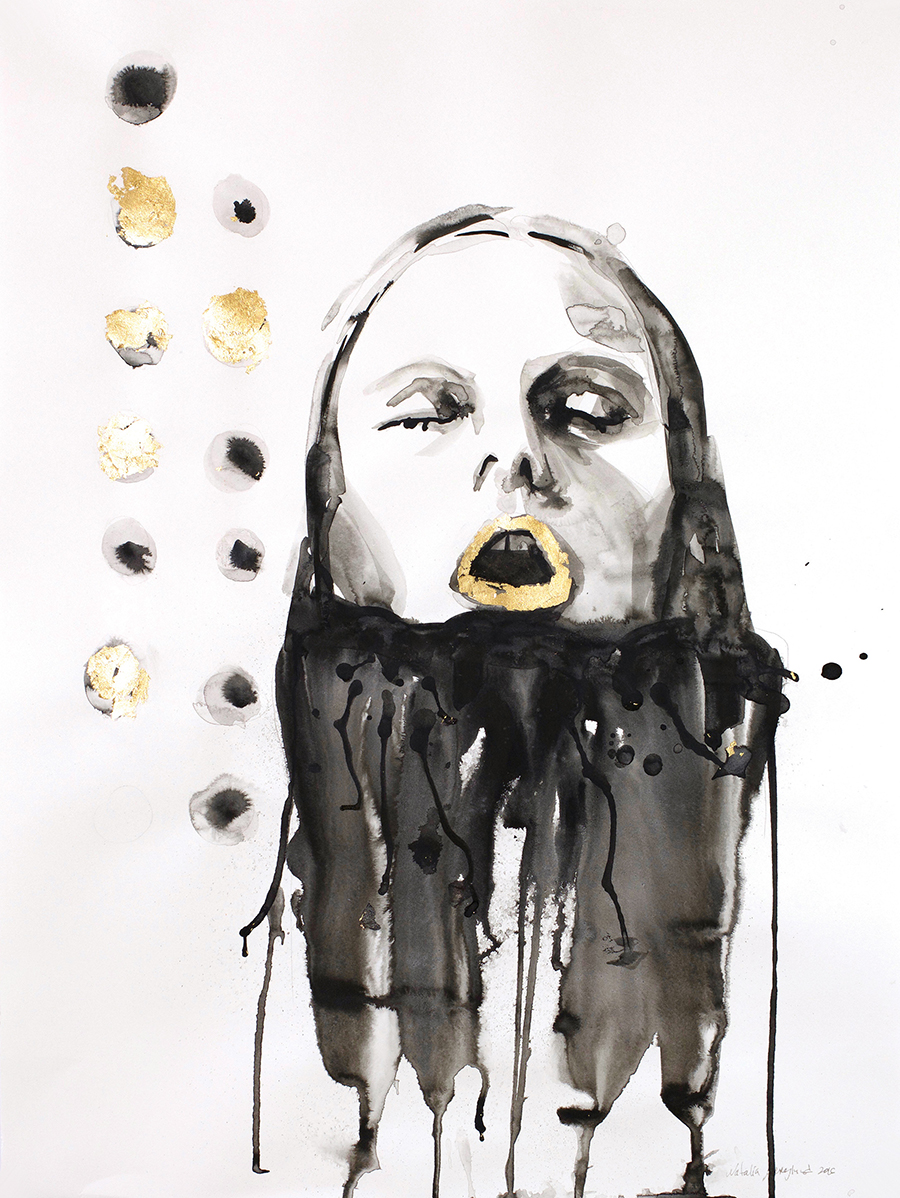