Making Art With Light: A profile of Florence Hill

Longtime Minneapolis artist Florence Hill builds community everywhere she goes, from her Northeast drawing co-op to the fields of France.

“Florence is like an icon around here,” Jo Ann Hendricks explains.

Hendricks first came to Minneapolis as Executive Director of NEMAA in 2004 and has been coming to Florence Hill’s figure study drawing group in the California Building ever since. On a recent Sunday, as a model takes center stage and begins with a series of five-minute poses, Hendricks lays out a section of newspaper and scribbles furiously with markers. As the session continues and the model works her way up to ten-minute and then twenty-minute poses, Hendricks switches to nicer stock.

Many of the twenty to thirty artists in the room are equipped with only sketchbooks and a pen. Some have brought entire toolkits; the man in front of me draws with watercolor pencils and then floods his drawing pad with a large paintbrush.

At the beginning of the session, Hill made a few announcements before taking up her spot at one side of the room. She let people know that there were oatmeal-chocolate chip cookies and that one member’s dog was completely blind and may need help staying by its owner.

She’s been running this group for 43 years. It happens every Sunday at her studio on the first floor of the California Building without fail, holidays included. The cost is $8.00 per person, which covers the expense of having a live model. There’s no instruction, no lesson, just encouragement and communal learning.

Hill presides over the group with a calm and caring presence. At the end of the session, she walks around the room and holds up members’ drawings, praising everyone’s efforts. Artists greet her as she comes by. The mutual respect and admiration between Hill and these attendees is part of what keeps people coming back week-to-week. 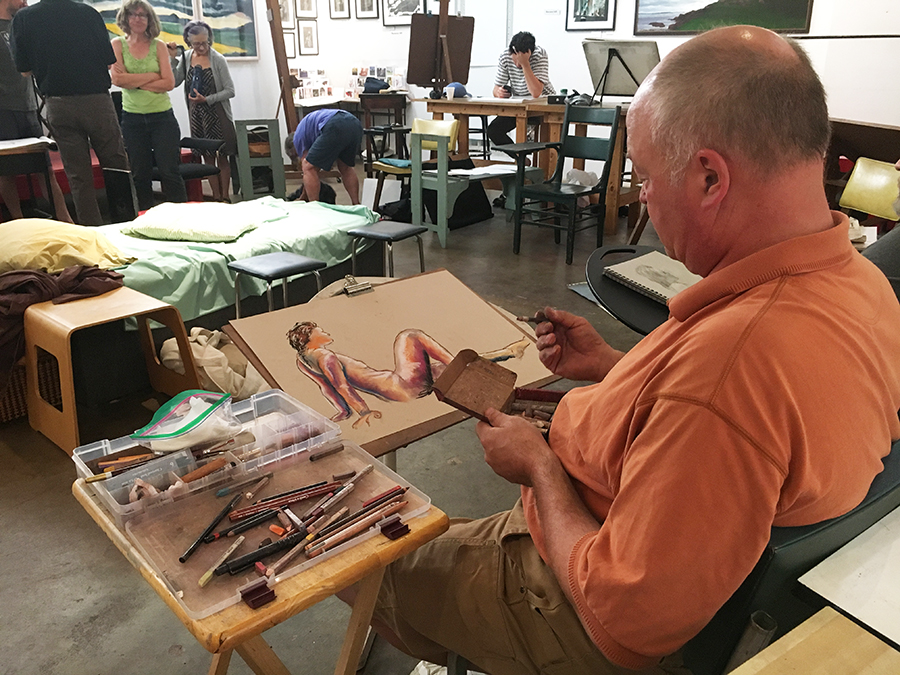 Scott Espersen adding finishing touches to his drawing at Hill’s co-op. Photo by the author.

Before sitting in on her drawing group, Hill and I met at her home in Powderhorn to discuss her own artistic practice.

“Have you ever seen moonlight?” she asks, as we sit in her garden. “It’s magic. It drifts just like perfume. Settles in.”

The plants curl around us and reach to fill the empty spaces between our chairs. Hill explains that she was always visually oriented and was an artist long before she began taking formal painting classes after the birth of her second child. Moonlight drifting in through her window at night is just one strong memory of her youth on a farm in northern Minnesota.

In her own paintings, Hill gravitates toward such quiet moments, when nature is at work. She depicts evening light dyeing the landscape purple, afternoon sun casting patterns across a bed, and a grove of trees backlit by an orange sunset.

“Just little tiny places that you find, where the light is perfect,” she explains. “Where nature is making art with light.”

Hill has been making things since she was a child, but didn’t fully begin her artistic career until having two children of her own: “I think that was a blessing of having the time with the kids, which was really inspiring.”

She would draw with them at the kitchen table, or give them paintbrushes and water and send them outside to paint on the sidewalk. She also began taking formal art classes at the Minnetonka Center for the Arts and the University of Minnesota. After having her last child in 1965, she was admitted into the Walker Biennial in 1968. 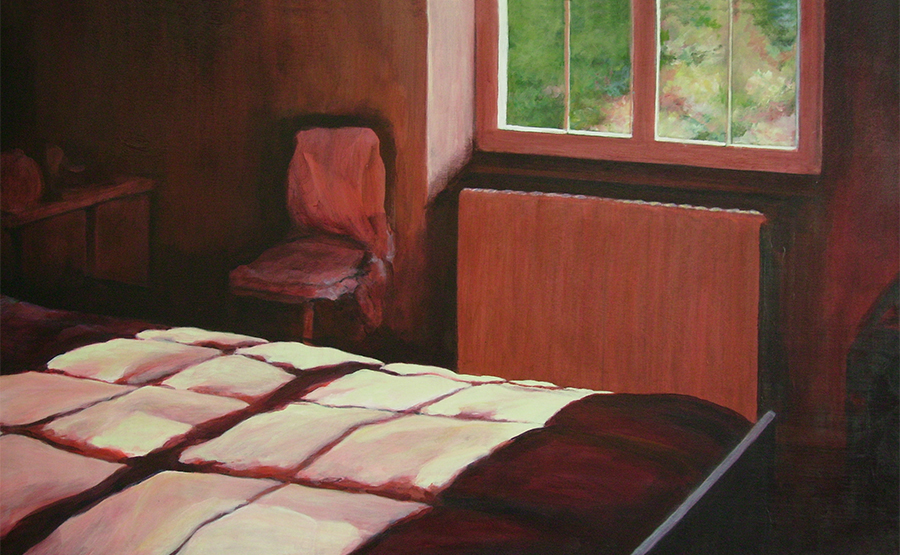 As soon as her children were out of the house, she began making annual trips to Brittany, a region in Northwestern France. With a few artist friends, she rented the same farmhouse in the countryside and spent a month each year painting the light coming in from the sea. “The first year I was there in 1992,” she recalls, “the headlines of the newspaper in the town of about 15,000 people read: ‘Two Americans in Town.’”

Conspicuous introduction aside, Hill quickly made a community for herself in her home away from home. She met a gallery owner who showed her work, and was soon getting commissions from the locals. The chocolatier asked her to paint his chocolate shop; the baker asked her to paint his bakery. Everyone loved to see their lives commemorated in her work: “That’s from my field, that’s from my town, those are my cows, this is my tractor.” 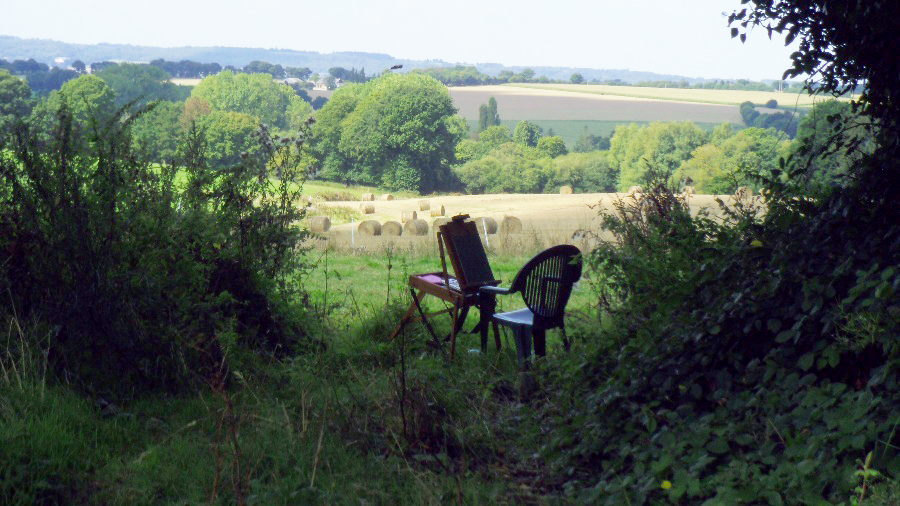 Back home in Minneapolis, Hill’s projects in Powderhorn have inspired residents to take a similar pride in their neighborhood. The alley that runs behind her block is full of “art tokens,” small paintings that hang from garages and backyard fences, displaying messages like “Hope is Like a Seed” and “Eres Precioso.” Many of these have been made at community events hosted in the Artstop Garden, a communal space next to Hill’s house. She bought the lot 28 years ago and worked with the neighborhood to transform it into a garden that hosts art activities with funding from Pillsbury United Communities.

Often, the kids who come to paint need some encouragement. Hill helps them to think about their favorite colors, asks them questions about the things they like, and eventually they ask for a paintbrush and some paints. Being one of seven children on a farm, Hill has always been good with kids: “We were eight and a half miles from town, so it was necessary to have your own peer group.”

After 45 years of living in Powderhorn, 43 years of hosting her figure drawing group in Northeast, and 25 years of visiting Brittany, Hill has many strong peer groups. Although she thinks of herself as a private painter, she calls herself a social animal and recognizes the power that art has had on her personal life. Not only has it been a way to engage with and document the world around her, it has built communities. The spaces that Hill has helped create have allowed others to access art’s healing power.

“I do believe art heals. When you are actually making art, you are in another place,” she explains. “I’m still walking and talking and interested in everything. It heals.”

“My personal life, it’s exactly where I want it to be,” she adds.

On Sunday, as 5 pm rolls around and the artists begin to pack up, Hill makes the rounds and says goodbye to everyone who came. I catch up with her as people leave, and she proudly goes around and shows me the work that they’ve done.

In our conversation at her home, she described painting as “a battle with the surface.” Looking at everyone’s work, you can see how some have vigorously attacked it with active marks, hundreds of lines like bird’s nests. Others have been gentler with the surface, marked it with only a few crucial curves, or smoothed charcoal over it in delicate swatches. Hill’s drawing group is practice for their individual battles with the surface, for their private lives as artists. It’s also a good excuse to socialize, as well as an example of the benefits of making art within a community. The cookies don’t hurt either. 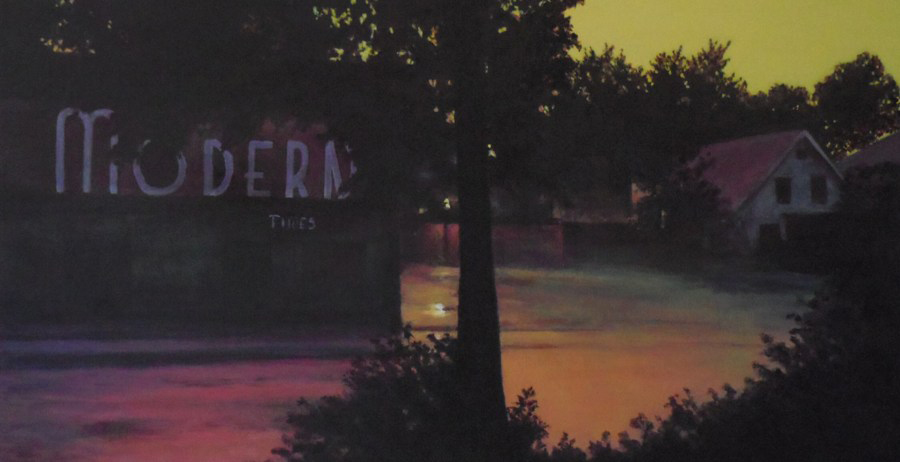 Florence Hill’s figure drawing group meets every Sunday from 2-5 pm in her Studio 103 in the California Building in Northeast Minneapolis. Her studio is open to the public on the second Saturday of every month from 11am to 4 pm and on Sundays before the drawing group. Her work can also be seen in the Fine Arts Center at this year’s Minnesota State Fair.

All photos courtesy of Florence Hill except where noted.