"Underbelly" explores our evolving concept of the body using materials that reflect our own organic, synthetic, and ecosystemic nature.

Today’s media-saturated culture always seems to be promoting the idea that our bodies need to change and conform; size, shape, nutrition, mental health, flexibility, ability… the list seems never-ending. It’s to the point where most of us try to ignore the fact that we inhabit a body altogether. Kate Casanova’s abstract sculptures at Public Functionary swim against this current in an undulating wave of pastels reminiscent of Medieval medicine’s four humours.

Like her forms, which ooze, drip, contort, and waver, it is difficult to pinpoint what it means, or even feels like, to inhabit a body. It is precarious and messy, impossible to explain and nearly as impossible to contain. Throughout Underbelly, Casanova playfully nudges her viewer to reframe their understanding of themselves as an organism. The color palette points toward the mammalian: pinks and mauves with accents of purple, black, and yellow. But they are also the colors of mold and sometimes even the colors of industry, a happy accident of silicone and styrofoam. The adept transformation of found objects plays a role in Casanova’s materiality as well. While silicone, resin, and plastic ebb and flow organically and call to mind corporeal structures like cilia or membranes, carpet and small items of furniture such as a table and desk lamp are oddly comfortable members of the ensemble, referencing our bodies and their architectures. 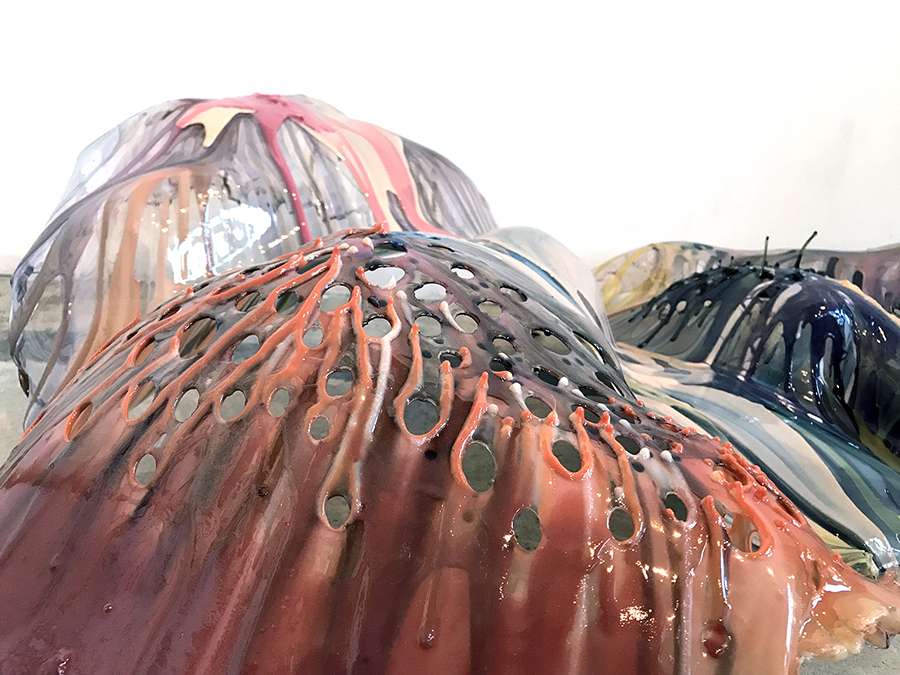 Casanova’s sculptural embrace of the body goes beyond the affectionate, as if each piece had swallowed you whole and engulfed you in its intestinal pinks, liver purples, bile greens, and phlegm yellows. Her fascination is contagious. Our biological understanding of the body, both human and non-human, has developed dramatically over the past decade. From scientists untangling the connection between microorganisms and the very basics of human health to thinkers like Donna Haraway positing that each of us has crossed the line from organic being to cyborg because of our addiction-like reliance on technology, simply existing has become much more complicated.

Walking amongst the abstract sculptures, it becomes difficult to place the sense of scale: Are these bodies like ours, human in size? Or are they components of some larger being scaled up for us to examine more closely? It’s easy to visualize pieces like Hindgut softride, in perpetuity as an oversized model of the large intestine. Likewise, Hardware disease, a hanging fabric and resin structure, resembles a stomach digesting an unknown object hypnotically rotating on a screen immersed in its fleshy folds. 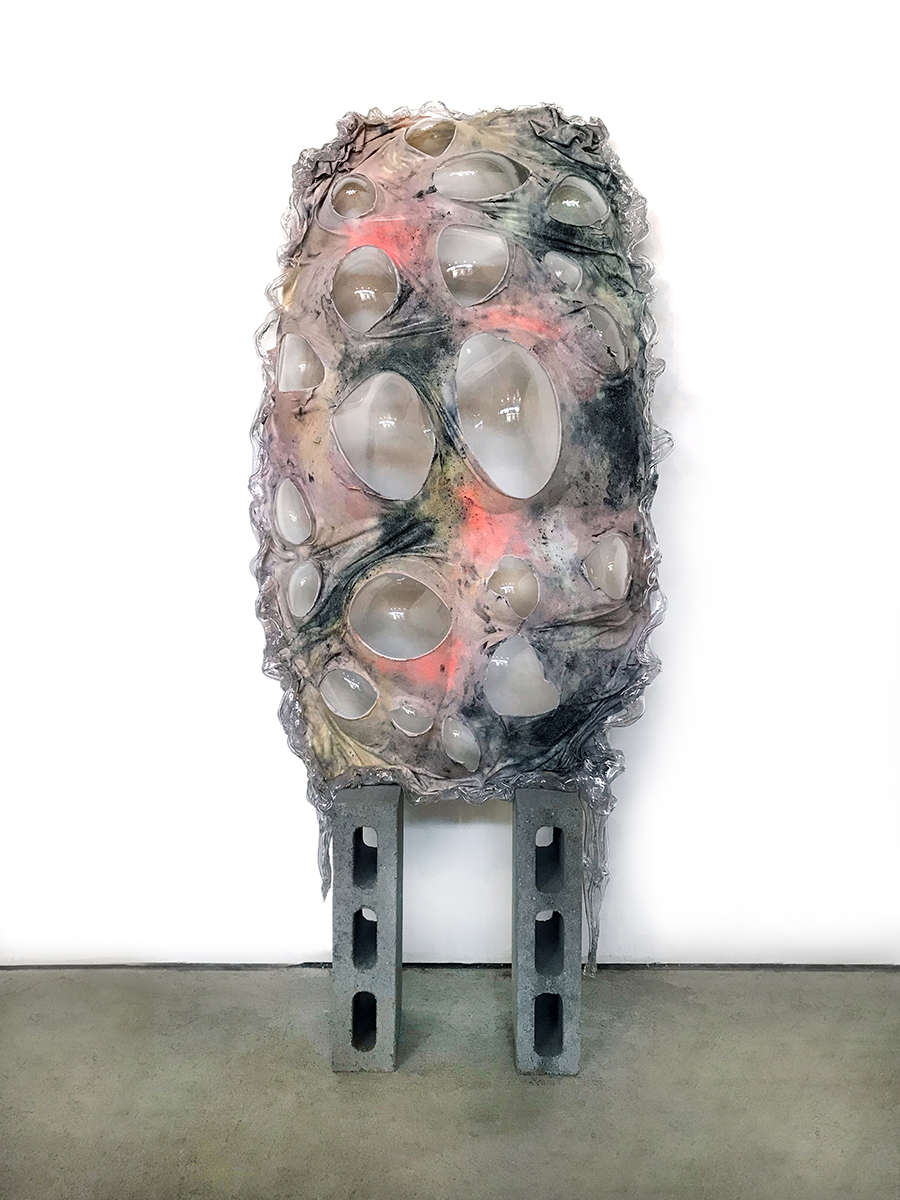 While these two works feel like abject parts of a larger being, other pieces feel like whole beings. No-show blister breath stands astride two tall cinder blocks resembling stocky legs, and Plush ply propriocept; subgenre bivalvia looks like it is about to surge forward like a sea creature or a bacterium on its tentacle-like appendages. This work in particular suggests a human connection, its cupped form offering up cascades of braided hair and found objects like jewelry and shoe stretchers.

It is tempting to think of the show in its entirety as a body of its own: a body of work in the traditional sense. Both as individual pieces and as a whole, the works resist this tidy classification just as they resist binaries of scale or human/nonhuman, beautiful or grotesque. Like the organisms and experiences they represent, there is no clean way to parse or organize these objects. Our bodies are not just a single organism but hosts to colonies of bacteria and parasites, much like we are colonies of organisms populating the ecological body we call Earth. From macro to micro, organic to plastic, these bizarre bodies refuse to sit still. 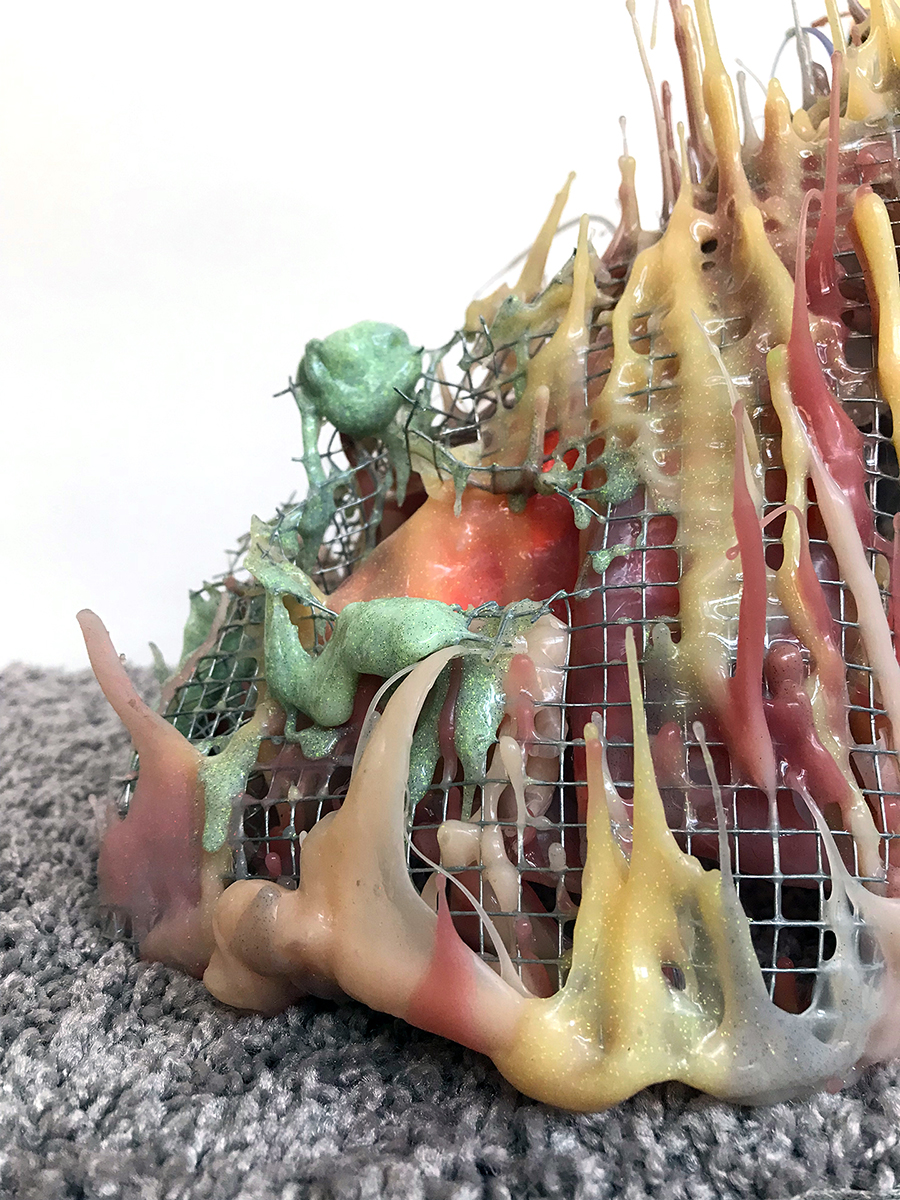 Casanova’s work is a link in the evolutionary chain that brought us Eva Hesse’s latex and resin works and Lynda Benglis’s foaming waves of polyurethane and rippling waxwork. The world of Underbelly nods to its Feminist ancestors and embraces the body as something beyond gender and even beyond human. While our understanding of self as a species is expanding to see ourselves as colonies of organisms and even as cyborgs augmented by smartphones, some have even been heard murmuring the term “Post-Human” lately. Casanova urges us to recognize that despite new conceptual leaps in self-understanding, we are nowhere near ready to become Post-Body. Whether through art or science, our culture has a long way to go before we fully understand who we are and perhaps even further to go before we are comfortable in our own multi-organismal skin.