The Faces of Children, Screaming: A Profile of Artist Alex Kuno

Recreating phantasmagoric fairy tales from the forests of his imagination, St. Paul-based artist Alex Kuno finds life and laughter in the darkness.

I met up with Alex Kuno one afternoon for an interview in our common neighborhood of Lowertown, St. Paul, where Kuno lives and works. I once heard him say that living in this neighborhood sometimes feels like living in an Edward Hopper painting. Rust-colored brick buildings that blush when hit with an early sunrise stand next to empty city streets that suggest a disconnect with the external world. We both joke about the Lowertown art community being like Sesame Street, with a mix of curmudgeons and peacekeepers and many distinct characters, all very lovable in their own way.

Kuno spends a great deal of time painting and drawing in his studio and admits to even spending his days off by looking at tutorials on YouTube, studying different media and methods for creating new work. I am curious about what keeps him so prolific and engaged in a field where others quickly burn out or give up. 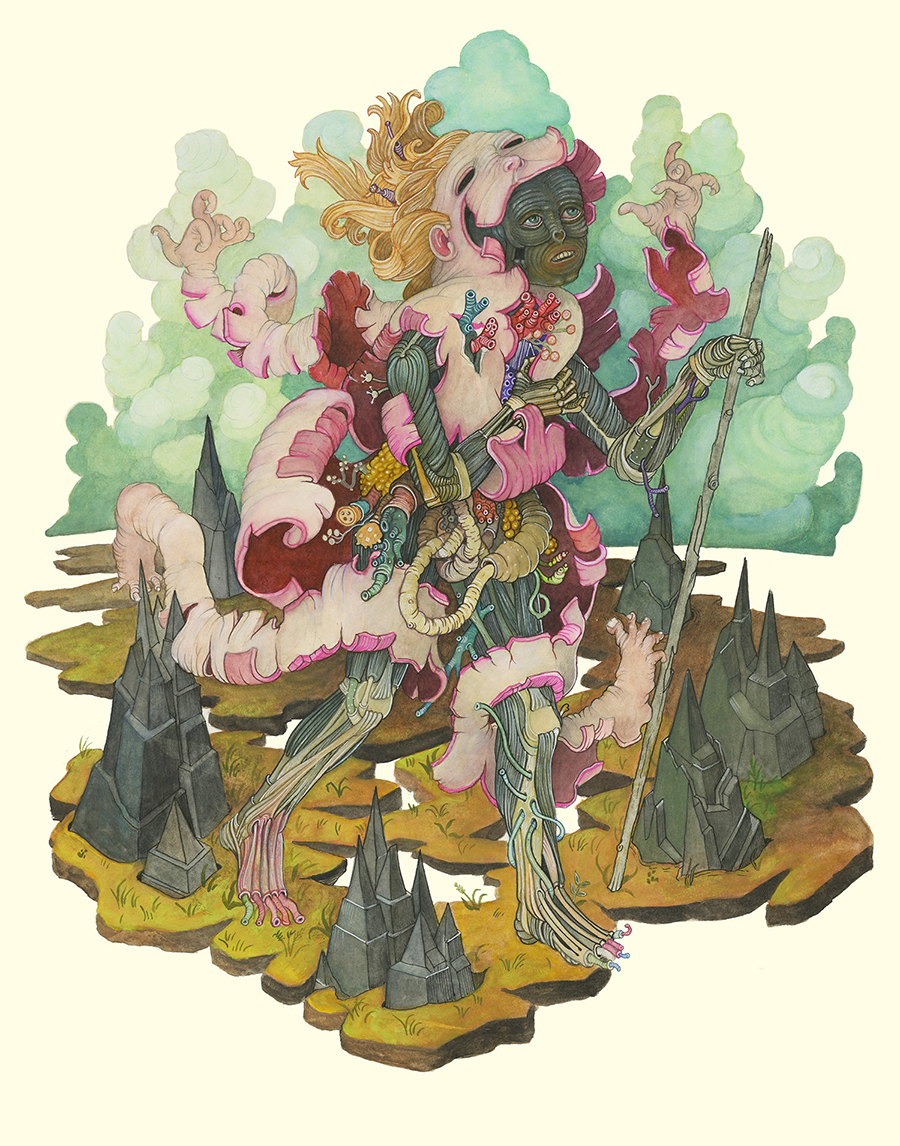 The short answer is his work is a part of him; he simply has to do it. He can't even imagine having a separate studio from his live-work space because he wouldn't want to be away from his work for any length of time. His artistic pursuits began in childhood when he would escape to his room to draw, to hide away from things that troubled him. Though not brought up with religion or any particular set of beliefs or traditions to follow, he says he wished he had been. Over time, he created his own personal mythology through his art, which he partly describes as “self-deprecating, to mock my own fears about being abandoned or alone.”

After graduating from the University of Minnesota in 1999 with a BFA in Studio Art, Kuno moved to New York City. At the time, he had a fascination with Renaissance art, making large oil paintings that bore resemblance to classical paintings. He felt like he needed to create this “serious” type of work to succeed as a working artist in New York City. 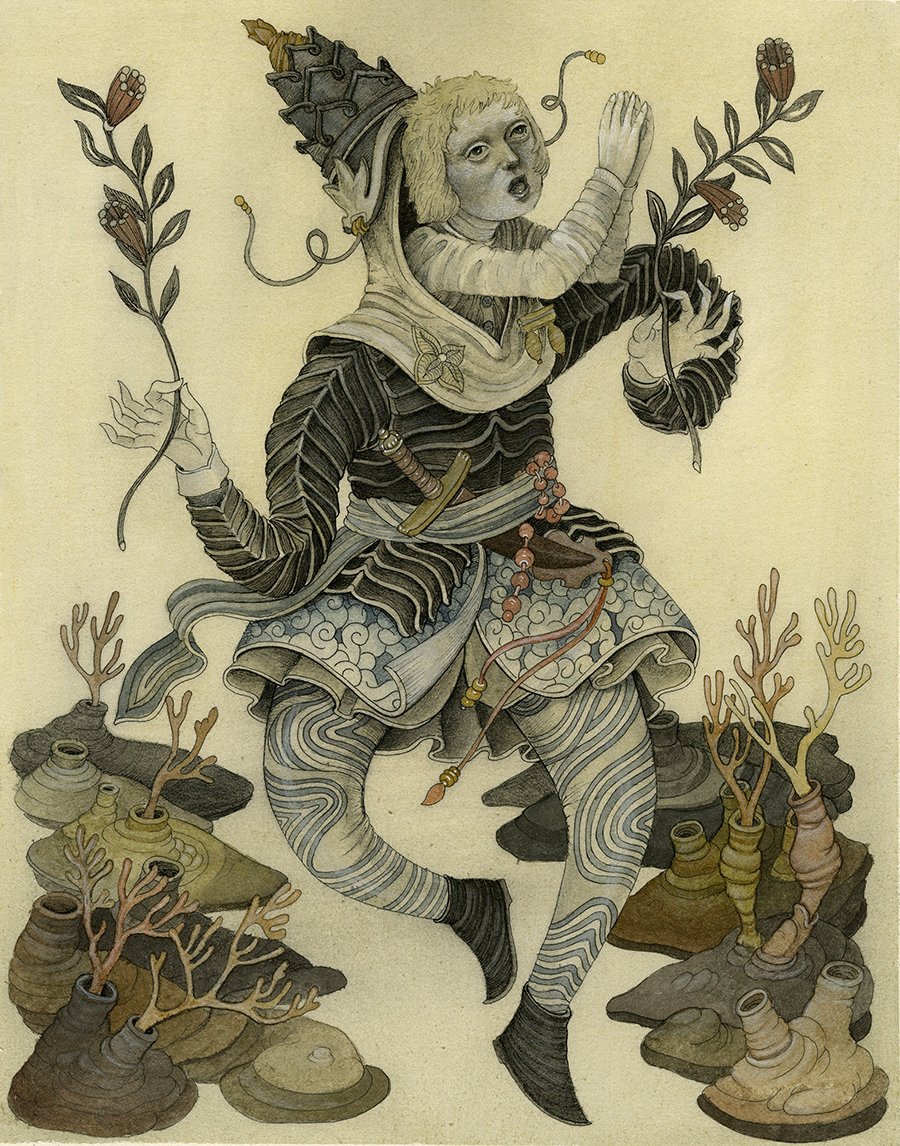 When he moved back to Minnesota in 2005, the return home took a mental shift. “I had to decide who I was going to be again.” He found a job working in tech support at a call center and would sit face to face with a computer screen, a headset over his ears, a pen clenched in his hand poised over a notepad. Dazed by mundane phone calls, Kuno hypnotically drew circles on the notepad, as if in a half-conscious dream. The circular shapes slowly formed into heads and eventually molded into the faces of children, screaming.

For the next two years, Kuno began to create a series with this work. He figured that if he was going to be starting over with his life, in the place he grew up, then he would create some new art using materials that were from his childhood — pencils, crayons, markers — and utilize them on loose pieces of quality paper that he had kept with him through several moves. He began making new work and initially created some timid charcoal drawings that hung in the SooVAC gift shop in Minneapolis.

During the interview we talk about the goodness of dark fairy tales and horror films. It is important to be aware of what frightens you so that you can acknowledge it, rather than always be shielded from it. Kuno is interested in how childhood anxieties form our adult perspectives. While listening to snippets of press conferences from the Bush Administration in the post-9/11 era, he heard statements being given without context, steering the audience toward uninformed conclusions. Kuno mockingly reiterates George W. Bush: “They knocked down our buildings because they hate our freedom!” He finds something very child-like about these bold and speculative statements, in the same way that a child may only see or hear one element of something frightening and then blow it up in their own mind to be something far worse. He has built a whole mythology around that notion. 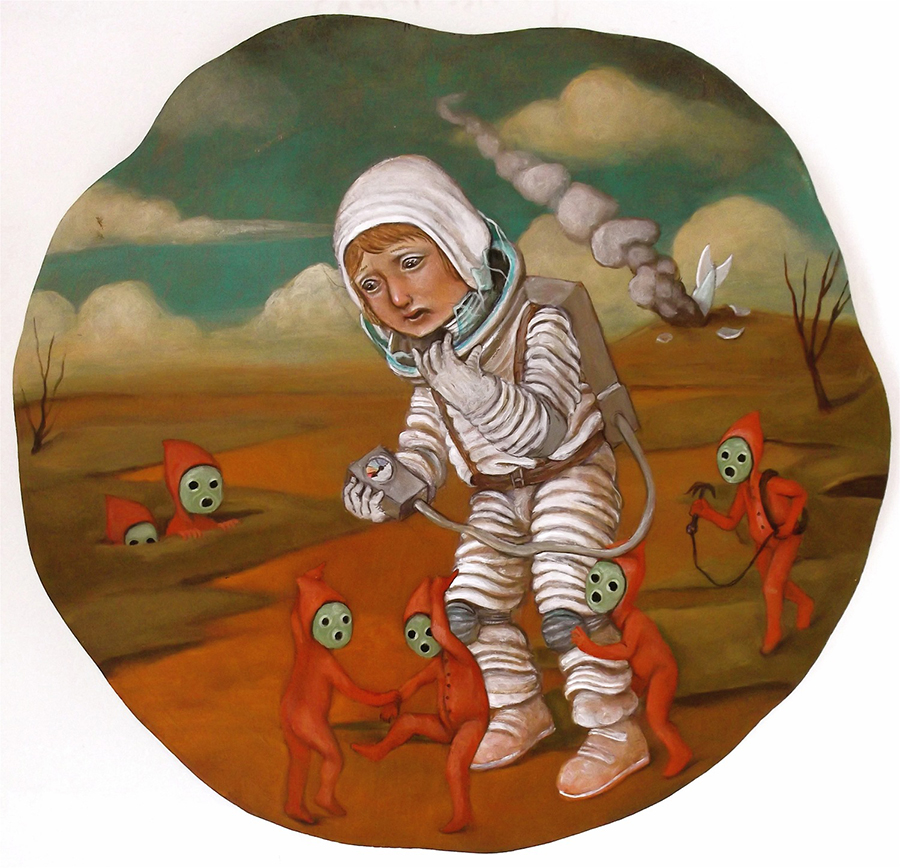 From the Miscreants of Tiny Town series

His ongoing series since 2007, the satirical dark fairytales titled The Miscreants of Tiny Town, is a depiction of an otherworldly place where all the unwanted children are sent to live. Each painting places the viewer in the middle of a story where both the beginning and the end are uncertain. The children in each story appear lost or confused in a land of petrified trees with branches that reach like pitchforks toward the muted sky. We see glimpses of their lives, where they commingle with serpents, and attempt to cross rushing rivers. They never grow up, they never grow old. Yet you can see the wear in their eyes from enduring days and nights in a standstill dwelling, where their years never move onward. I believe it is just like childhood, when we don't yet have a frame of reference for time and experience, and the clock moves so slowly that we think our nightmares will last forever and nothing will ever get better.

Whenever Kuno played with his G.I. Joes as a child, he didn't just want to be the human controlling the battlefield of miniature plastic men; he wanted to be inside that imaginative world, too. He wanted to be a part of it. It’s much like how he creates his drawings now. He's not a puppet-master standing on the safe side of the page, dictating imagery; he is inside the story, often claiming that he “has no idea where this piece is going” as he works, as it leads him to where it wants to go. He is influenced by the imagery of vintage anatomy drawings and precolonial maps of the United States, diagrams that were created with a naïve preconception of what something might possibly look like, without knowing for sure. When there is no right or wrong way to depict something, it requires more from the imagination. 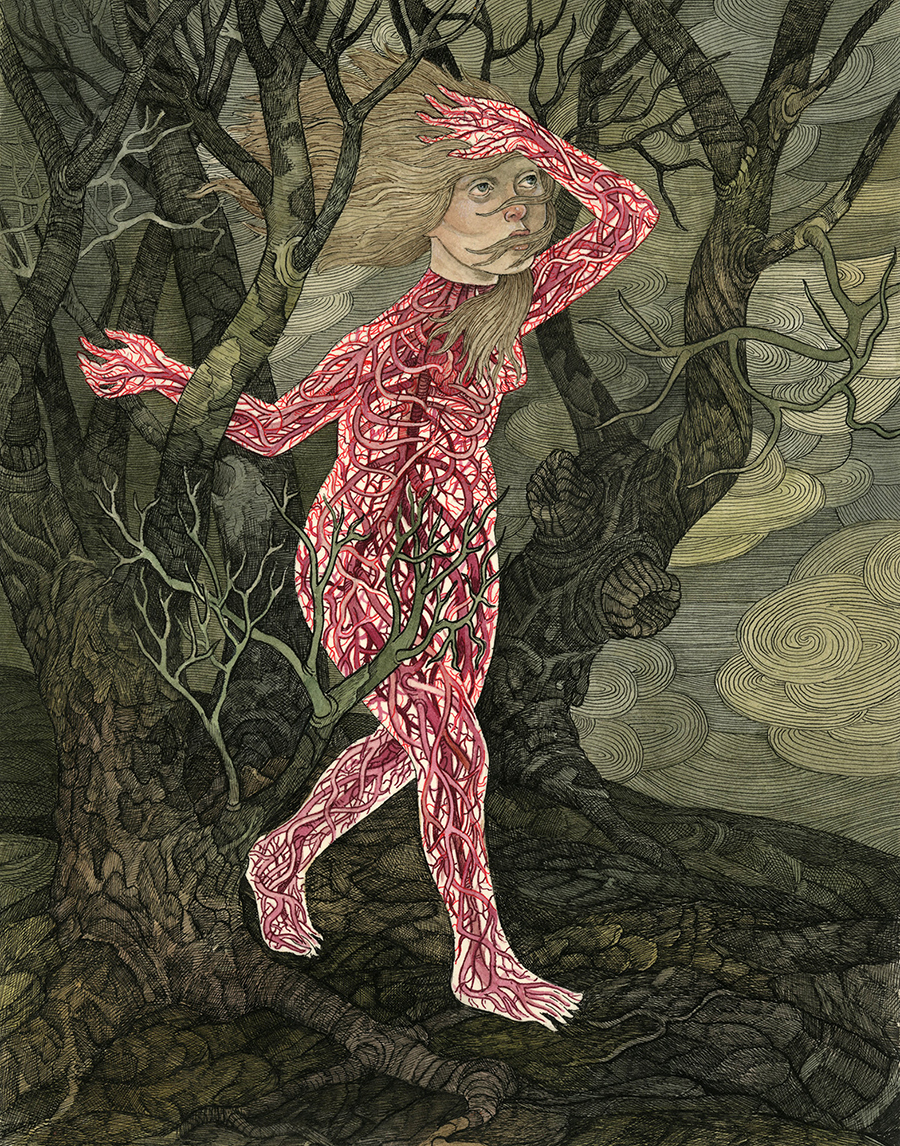 Kuno is often surprised by the conclusions of his own works. He appreciates when one person has a humorous response to his work, while the next person is horrified. He loves the juxtaposition because it means that viewers are taking away something unique and that his personal mythology can be personal to them, too.

I think that Kuno's work reminds us that personal or societal fears can overtake us if we let them, but if we face them head on, even laugh at them a little, then maybe we'll realize that the fear is inside our own head. Or maybe he is prophesying the utter final destruction of the world, in which everything we've ever feared since infancy will come barreling down from the sky, encasing us in a giant, mucus-laden cobweb where we will be trapped and forced to relive every traumatic and embarrassing moment of our life before being extinguished by a savage one-eyed shrieking ogre riding a meteorite. I’m pretty sure Kuno would be fine with either interpretation.

Alex Kuno's work will be featured in upcoming national and international exhibitions and publications, including a series of small pieces in LA’s Hive Gallery in July, a two-person show at the Talon Gallery in Portland in September, and he will have a painting made specifically for NYC’s Spoke Art Gallery’s Suggestivism opening and book launch. He is also sending a couple of pieces to the Feinkunst-Krueger Gallery in Hamburg, Germany. Kuno will also be a featured artist in an upcoming issue of France's Hey Magazine. Upcoming local exhibits include a group show at the Ambiente Gallery in NE Minneapolis in August and Mitre Box Gallery in Minneapolis in November. He currently has artwork up at Nina's Cafe in Saint Paul through June. 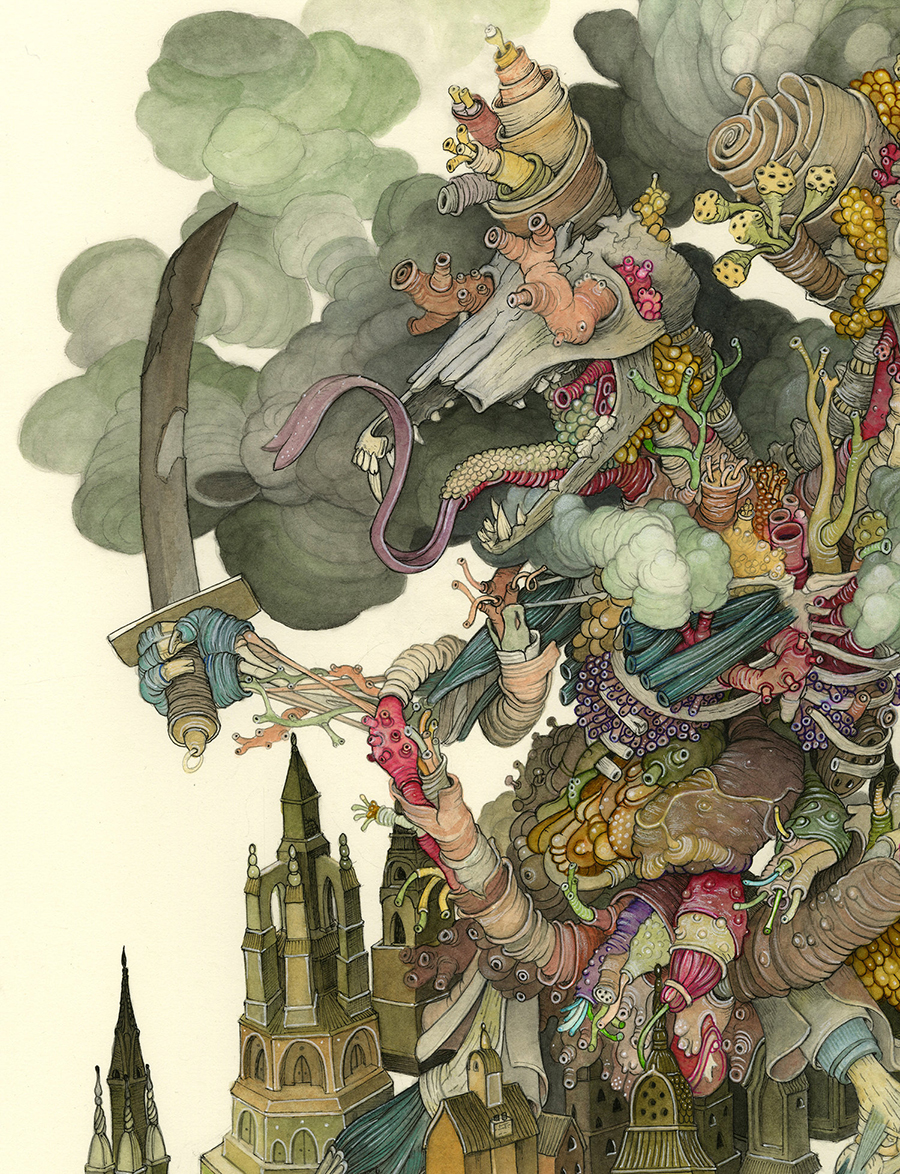