On the Record: Lisa Troutman’s Life as a Graphic Recorder

Through her live-drawing practice, Lisa Troutman blends illustration and performance and proves what an artist’s eye can bring to the board room.

From her brightly decorated studio in Saint Paul, Lisa Troutman plies her trade as an illustrator and graphic recorder. A relatively young and growing field, graphic recording consists of visually representing the content of events through large-format drawings, often done live. Troutman attends everything from business meetings to keynote lectures and communicates what is taking place through a combination of imagery and text, which she lays out carefully to capture the flow of complex ideas.

Troutman made the switch to illustration, and ultimately to graphic recording, after a career in product design research. Illustration appealed to her because it meant working on shorter projects for a diverse range of clients. The ability to visually capture information quickly, along with her research experience, eased the transition.

“I don’t want to sit in an office, clicking and typing forever on these massive projects with seven year timelines,” Troutman explained. “I want to work fast. I want to work live. I want to work with people, and I want every day to be different.” 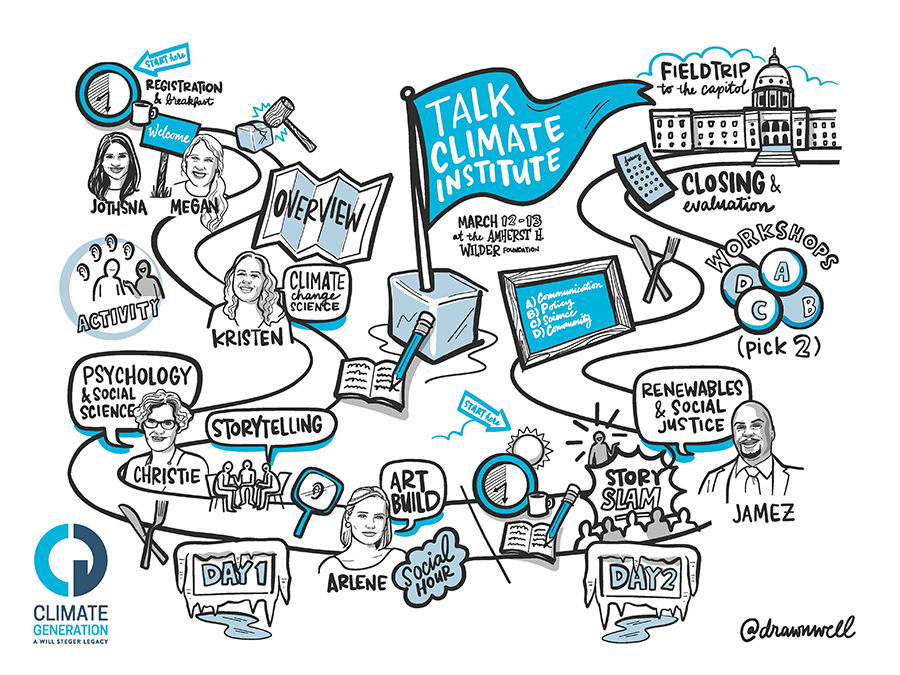 Through her work as an illustrator and graphic recorder, she can continuously immerse herself in new ideas: “I’m always trying on different industries, and I get to live and walk in someone else’s shoes.”

A friend introduced Troutman to graphic recording while she was working as a freelance illustrator in Minneapolis. Although she was excited by the work, it took time for her to realize that it was a possible career. Her first graphic recording projects were for very little money and were often done for friends or acquaintances. Eventually, she created Drawn Well LLC, her one-woman creative firm specializing in graphic recording and other forms of illustration.

“Even when I started doing this, I didn’t realize there was a community here of people with whom I could hang out and share ideas,” Troutman explained. After connecting locally with colleagues in the industry, Troutman was better able to find and refer work to others.

“Everybody wants you to succeed,” she said. “We know we can all learn from each other and that, at some point, we’re going to get work from somebody else and give work to somebody.” 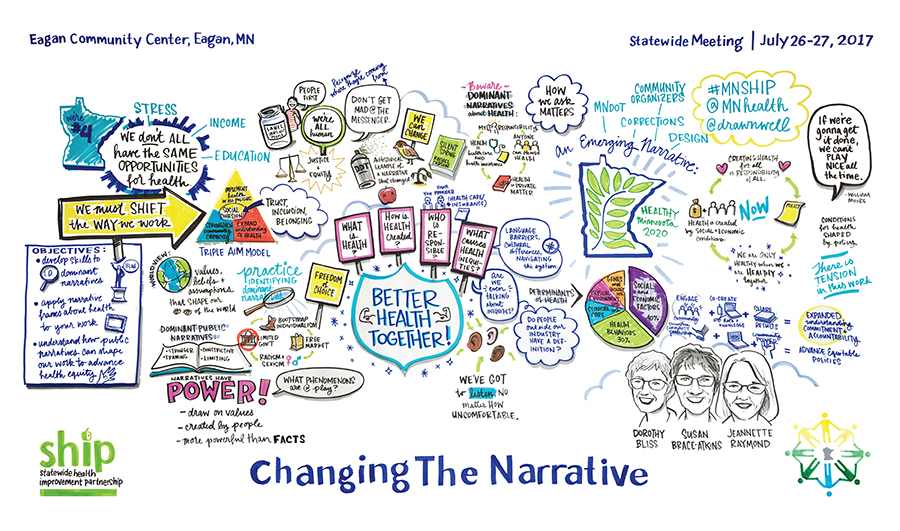 For Troutman, creating a graphic record involves preparation. Before the event, she meets with the facilitator to draft a road map and brainstorm possible visual metaphors. She then prepares her paper with a title and relevant details. Troutman believes this initial planning leads to a more thoughtful and unified piece.

“Before I realized graphic recording was a discipline with real research behind it, I thought it was important to show up with a blank piece of paper and make the whole thing a performance,” Troutman explained. “What I’ve realized is that your piece can have more impact, and you can be less stressed, if you come in and you’ve already thought about a visual metaphor that you want the whole thing to hang from.”

While at the event, Troutman records live in front of attendees. Both the act of visually recording and the finished document can help visual learners in the audience.

“It makes dense information more palatable, which is amazing because 65% of the population are visual learners,” Troutman explained. “It can enable people to experience better recall, deeper engagement.” 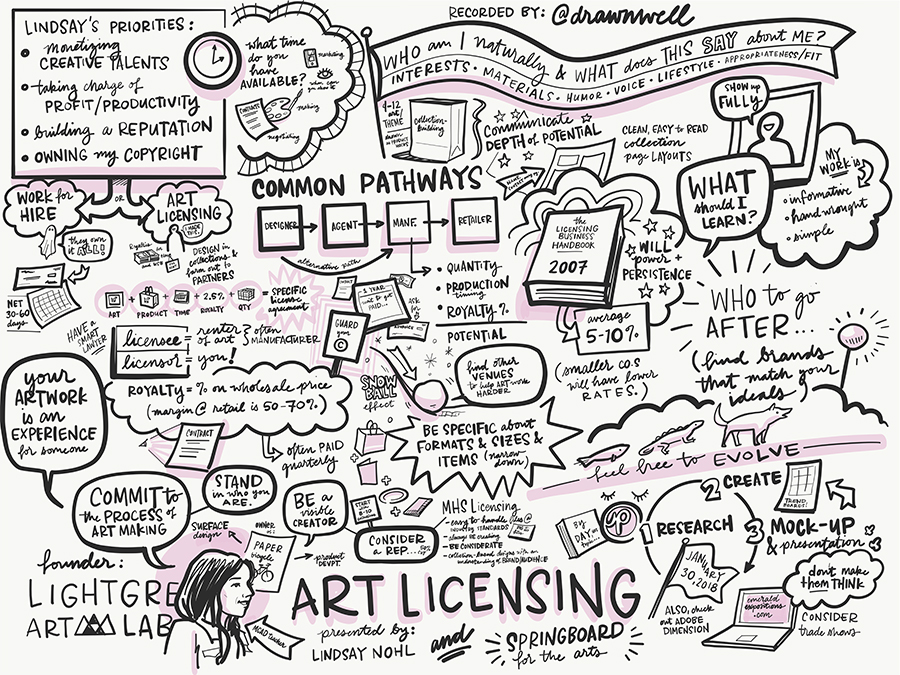 Graphic recording of a presentation on Art Licensing by Lindsay Nohl and Springboard for the Arts, 2017

After she attends the event and creates the record, Troutman documents her drawing through a series of photographs, which she then stiches together and edits on her computer. While some graphic recorders choose not to edit their drawings after the fact, Troutman sees this as a way to make the finished document stronger, but only allows herself roughly three hours of editing time.

She recently drew over eighty miniature portraits of party attendees at the Minneapolis Jewish Federation. She joked that she had to edit a few after the fact because, “when you’re doing eighty portraits in a three hour session, some of them are better than others.”

When seeking out clients, Troutman places a large emphasis on social justice. She enjoys working with companies and organizations that share her values and has been able to establish a strong network in the Twin Cities.

“The work begets work,” she explained. “By working with mission-aligned organizations, I’m often exposed to people who are working in social justice, environmental justice, and equity of every stripe. Those narratives are really important to me. With graphic recording, I try to focus on those organizations. It’s helpful that they generally know one another.” 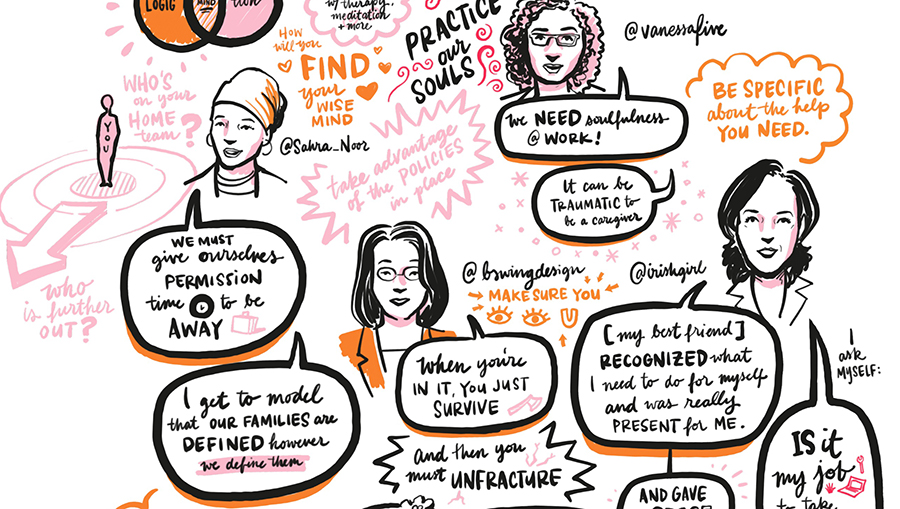 Detail of graphic recording of Pollen Midwest presentation on self-care, 2017

In addition to working as a graphic recorder, Troutman is also an avid creator of Sketchnotes. Sketchnotes, like graphic records, are visual representations of a meeting or lecture. In contrast, they are generally completely improvised and done on a much smaller scale. Troutman was first exposed to the concept while getting her degree in Industrial Design, as a way to effectively take notes in a visual field. Now she generally does it on her own time. Attending social justice-oriented events and lectures, she visually records what is said, and then disseminates her Sketchnote as a means of furthering the event’s reach.

“I want that work to live on as long as possible and go as far as it should,” she said. “I make it very clear to anyone who is interested that they can have a high-resolution copy for whatever purpose and share it with whomever.”

Troutman works towards greater representation by incorporating diverse figures into her graphic records and illustrations. While working with corporate clients as a freelance illustrator, she realized that the characters she sketched often shaped the actors selected for a commercial, or the people represented in a graphic. For example, if she was instructed to draw a couple in their mid-twenties, she had leeway to make them interracial or gay and have that interpretation carry over into the final product.

“More often than not, I see those decisions that I’m making on the page translate to whatever the media is, whether it’s photo or illustration,” Troutman said.

“Illustrators are powerful. They just have to choose to use that power.”

Troutman continues to make an effort to represent diversity in her graphic records and Sketchnotes: “Anybody who works with Drawn Well doesn’t get to escape that. I’m going to bring in a diverse cast of characters, everybody from wheelchair-bound characters to different ethnicities. I’m Latina, and I don’t see myself represented very often.”

This past year, Troutman led a Sketchnote workshop at Design Camp, a conference in Northern Minnesota, and hopes to provide additional workshops in the future. She plans to tailor them to different experience levels, for everybody from those just learning how to draw to creative professionals.

Troutman is excited by the growing potential of both graphic recording and Sketchnoting to disseminate important information. Going forward, she hopes to see greater diversity in the graphic recording profession.

“I would like diverse faces doing the capturing because they will hear it differently, and they will draw it differently,” she explained, adding “that is a necessary change that we all need to make.” 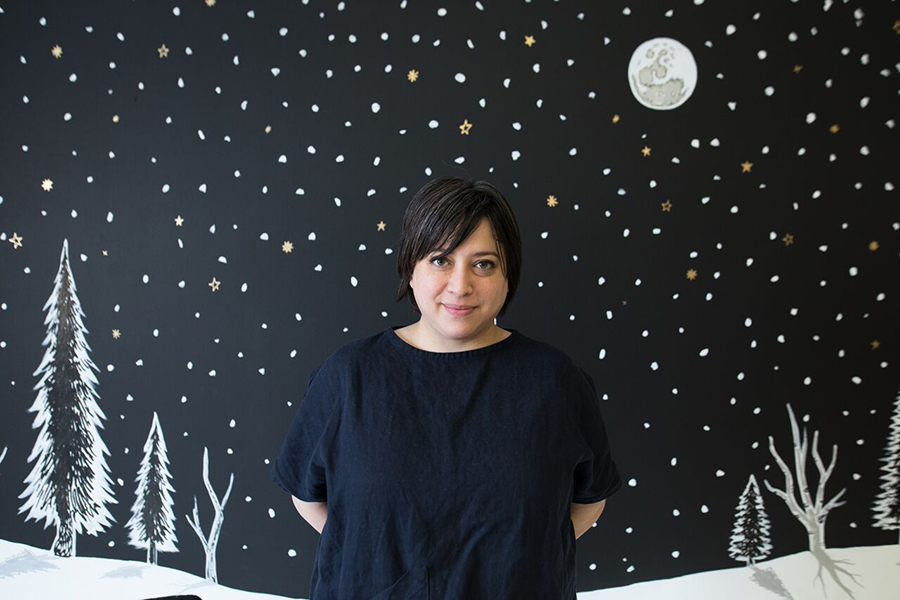 More examples of Troutman’s work, as well as pricing and contact information, can be found at drawnwell.com. She also posts regularly on Instagram as @drawnwell.