Thinking Outside The Booth: The Porch Gallery’s Art Fair

One humble gallery space takes on the scale and substance of the all-powerful art fair, opening June 2nd with work from local, national, and international artists.

When artist Mark Schoening finished up graduate school at the University of Minnesota two years ago, he needed some kind of project. “I wanted to take the opportunity to champion the work of others,” he says. “It can be easy to turn all your attention and focus on yourself. I felt like it’s good energy to start promoting the work of others and collaborate on projects with people that I normally wouldn't. In a weird way it loops back, and inspires my own practice.”

Having just bought a house with his wife Dawn England, Schoening went about building a gallery in their home. Well, perhaps “in” isn’t exactly the right word. The Porch Gallery, as its name suggests, invites visitors to view exhibitions through the fixed window on the couple’s porch. 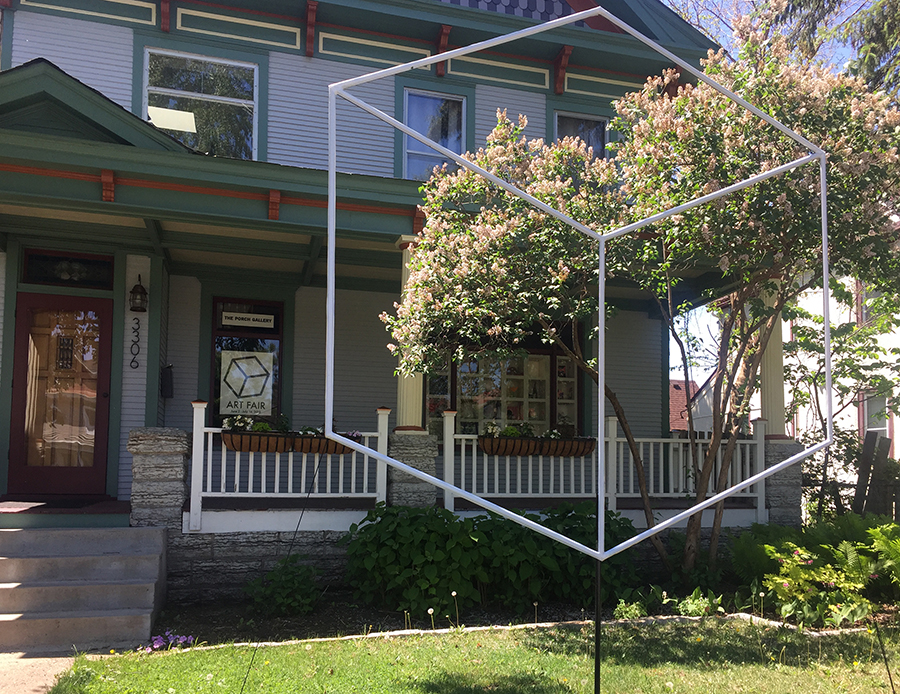 The Porch Gallery at 3306 Park Avenue in South Minneapolis. Photo by Sheila Regan.

With exhibitions that run 6 weeks, visitors are welcome to come check out the work on the porch at any time. “The whole gallery is just about accessibility,” Schoening says. “There doesn’t need to be an attendant or that sort of thing.”

There’s also a large sculpture on the front lawn, a feature which began last year for Daniel Jaffe’s exhibition, Ripe. For that show, Jaffe created a giant yellow banana sculpture for the front yard, which probably helped attract over 100 people to the opening reception, which spilled off the porch and into the street. 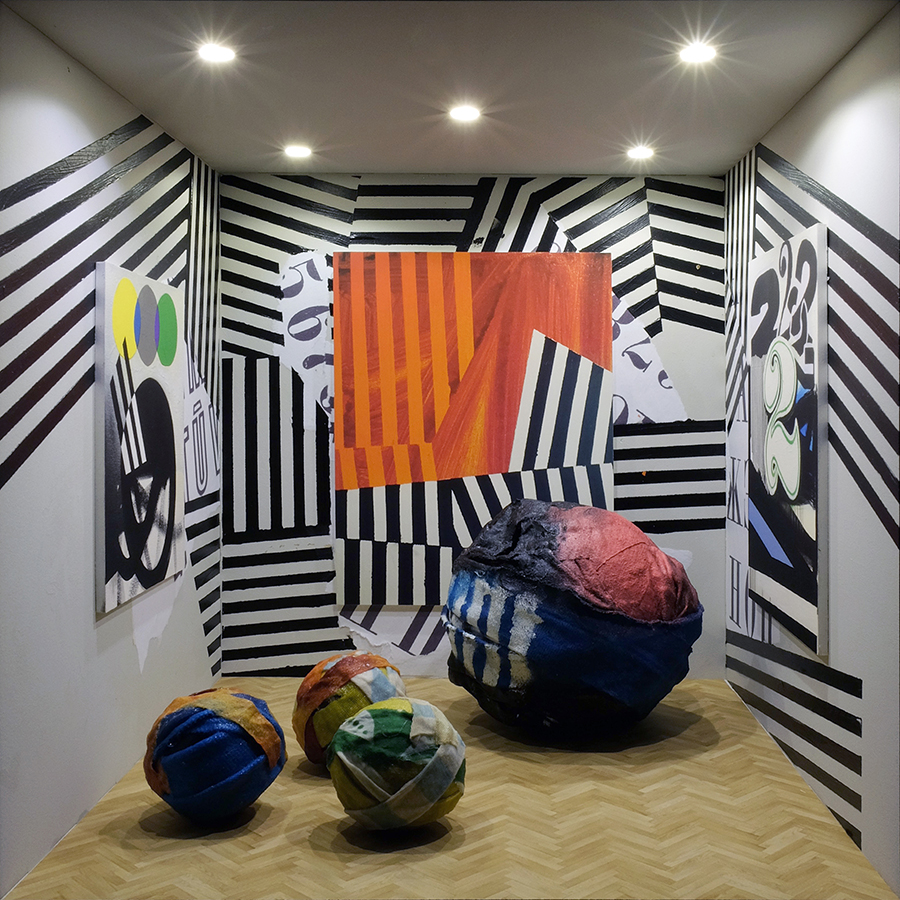 “This is the third year, so people know about it and I think are comfortable stopping up,” Schoening says. On a weekend night, it’s not uncommon for Schoening and England to come home from a friend’s house and see people biking up to their porch or walking their dog up and taking a peek at the artworks. “It’s become a really fun thing for our neighbors to become involved in,” Schoening says. 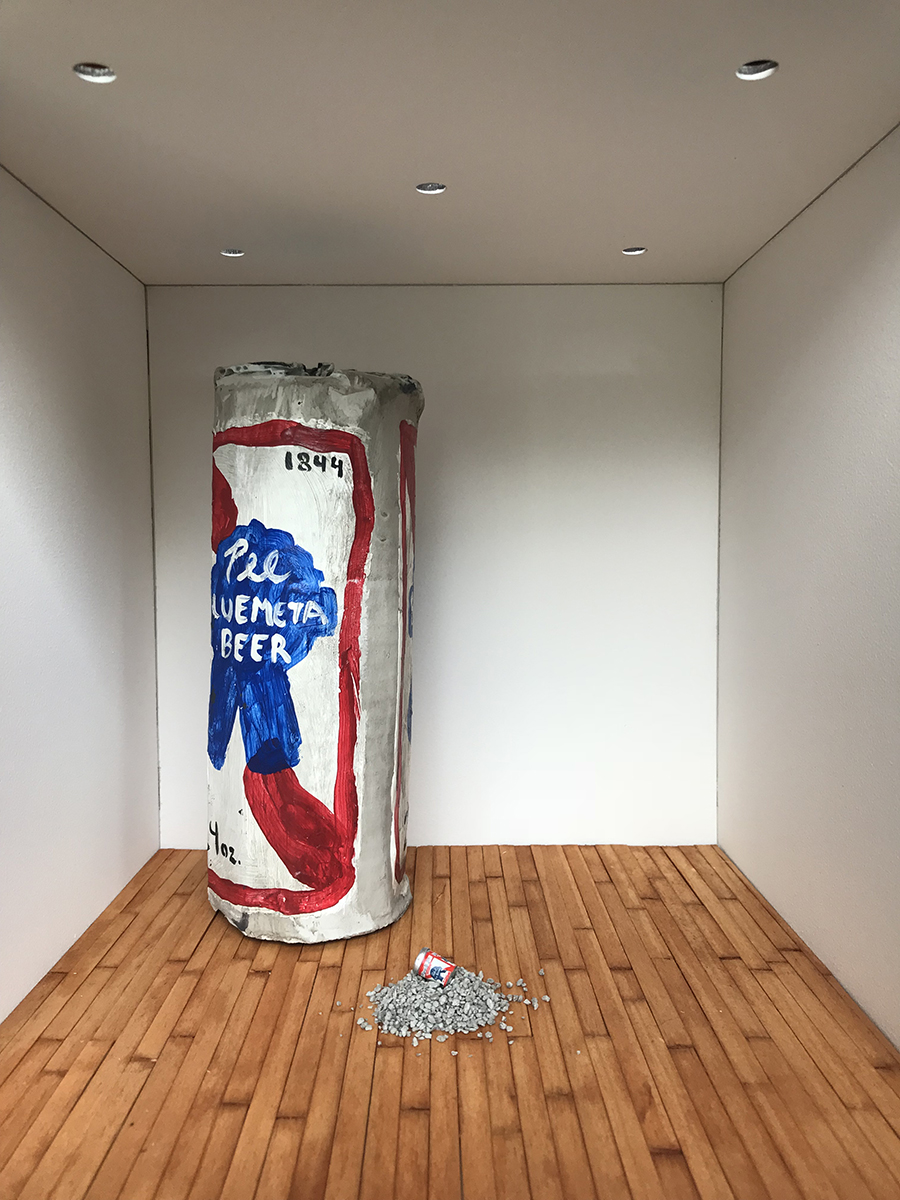 That neighborly connection wasn’t necessarily his original intention. Schoening’s initial hope was to provide an outlet for artists, especially folks living in other cities. For example, he doesn’t know of a venue in the Twin Cities that would be showing the work of Brian Willmont, based in New York, or Casey Gray, from San Francisco. “I wanted to create a space to see work that maybe wouldn’t have a venue elsewhere in the city,” he says.

The gallery’s first show this season is titled Art Fair, an ambitious 24-person show that, judging from the installation photos, marks a massive expansion for The Porch Gallery…

Normally MPLSART.COM doesn’t use spoiler alerts, but after getting the inside scoop on Art Fair, we didn’t want to give too much away for those that want to be surprised.

Looking at photographs of the different installations which will be included, you might mistakenly think that the u-shaped booths mimicking what you’d see at a contemporary art fair were life-sized. Well, surprise: they’re not. These are miniature works, made in 1/12 scale. They are doll-house versions of what you might find at some place like Art Basel in Miami or the Armory show in New York.

“When I came up with this, and as I was talking about what it was, I didn’t like to think that I was being intentionally deceptive,” Schoening says. “There’s a combination of how much you know that makes it interesting, but I don’t know what that line is.” 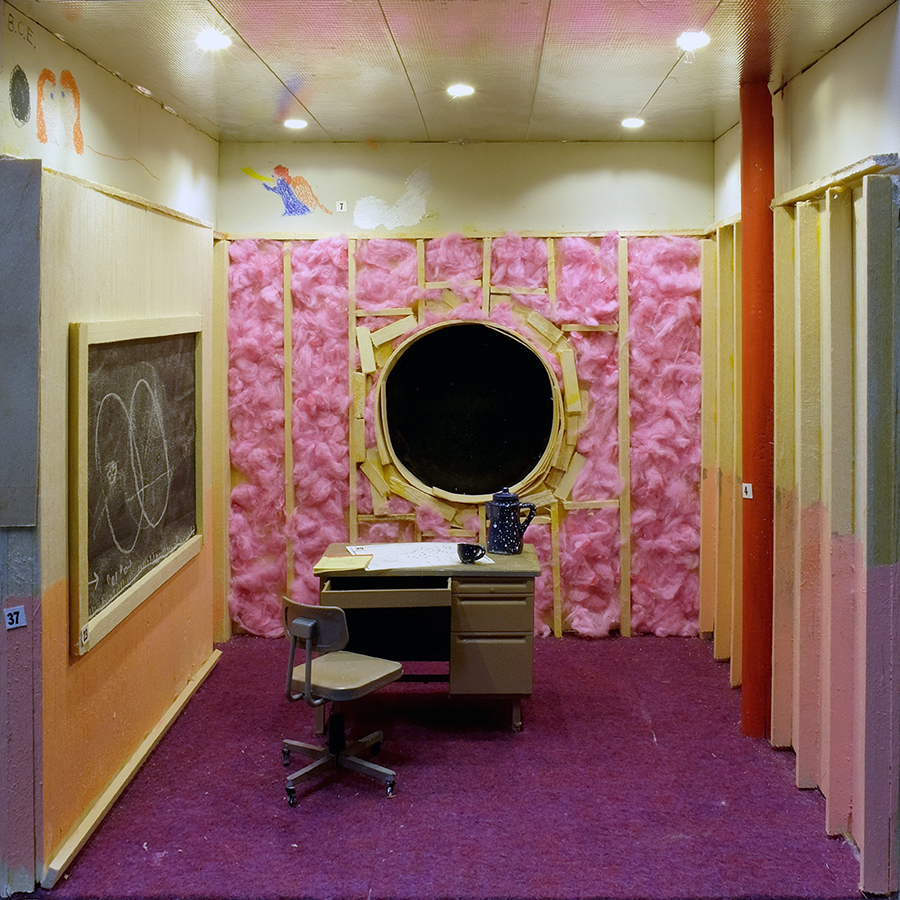 The impetus for the show sprung from the observation that more and more, people experience visual art online, rather than in person. Over the past year, Schoening says, “I started to see that artists were taking work they were making and photoshopping it into spaces… creating this illusion that their work was operating outside of their studio.”

At the same time, Schoening observed that there’s a certain importance among contemporary artists to have work shown in a solo booth space. “I thought, well, why don’t I take this model of this image of how people are presenting their work, which is basically the model of the contemporary art fair, and build 1/12 scale galleries.” Then Schoening invited 24 artists to participate. He shipped them each a flattened box, so that they could each set it up in their studio.

“This is by far the most ambitious show here, trying to corral 24 artists around one project,” he says. “I think a lot of people excitedly said yes in the beginning, and then once they got it and were working through it, they were like, ‘this scale is really hard to wrestle with.’” There was a lot of emailing back and forth with the artists along the way, as they worked to make their scale models, updating him along the way. “I teach drawing and painting at the University. At times it felt like I had a group of students and the assignment was to make the booth project. It was incredible to see, and get these unpacked the last couple of weeks. In some cases I had no idea what was coming.” 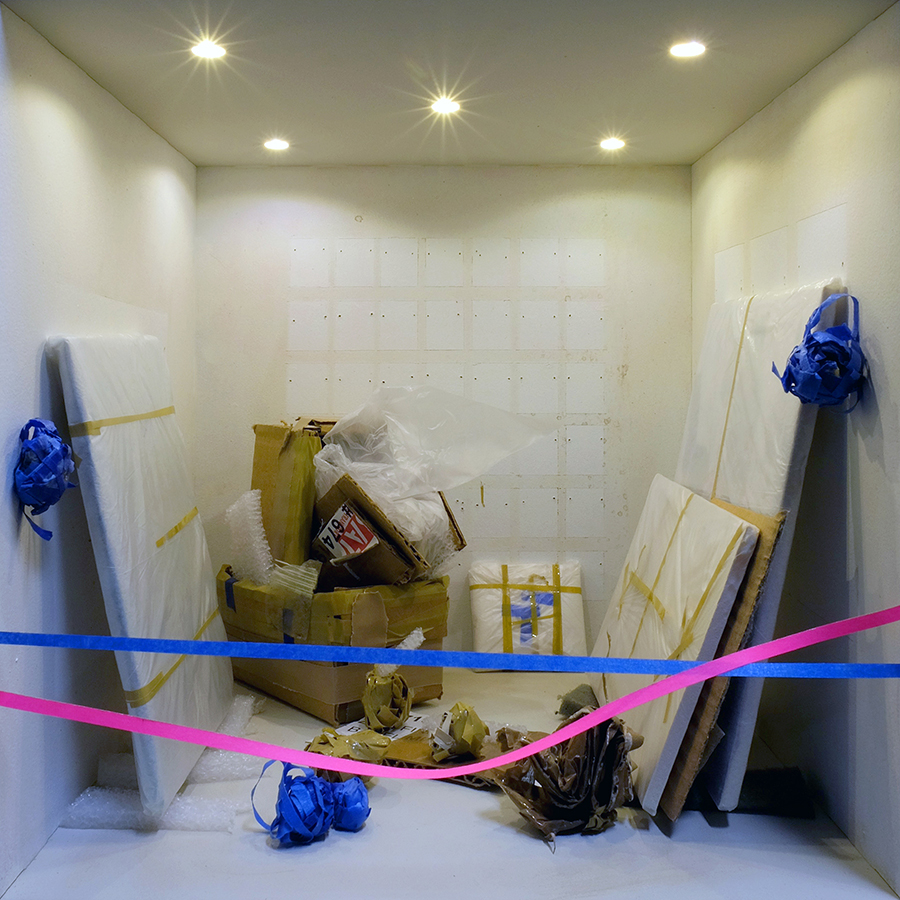 The show offered an opportunity for some of the artists to try new things. For Casey Gray, who makes paintings that are stencil based, he got to try doing something sculptural on a small scale. Another artist, Eric Benson, has worked as an art preparator, so for his piece, he made a miniature version of what an art fair booth would look like after the paintings have been taken down. “He meticulously worked with cut acrylic paint,” Schoening says of Benson’s work. "He cut all the tape down to scale as it would be, so there’s some really delicate gestures within this.”

For the people that have seen the work so far, Schoening has noticed most people lean over to see each miniature booth, in order to take in the details. “Rarely do I see an audience physically reacting to the work that way,” he says.

At the same time, Schoening recognizes that more people will see the work online than in person, and that’s okay. Whether people experience a surprise when their perceptions of the work’s scale are challenged, or if they simply marvel at the delightful details that each artist has come up with, it’s a show that has a life in person and in pixels.

Art Fair opens Saturday, June 2nd, from 8-11pm at The Porch Gallery and will be on view through July 14th. For more info, check out the event listing here.