Three local artists showcase their own approaches to Afro- and Indigenous Futurisms.

From countless stories about this week's blockbuster arrival of Black Panther to This American Life’s hour-long exploration this past summer — not to mention about five decades of amazing music from Sun Ra and George Clinton on — by now you have probably heard the term “Afrofuturism.” More than being just a niché facet of science fiction, Afrofuturism is a movement, or perhaps more accurately a method for exploring and exalting Black Excellence by looking forward, backward, inward, and outward into the universe. Artwork, literature, dance, music, and cinema in this tradition is often a celebration, a critique, a lament, and a promise all at once.

Andrea Carlson has written an amazing essay offering a history and criticism of both Afrofuturism and Indigenous Futurism, a similar methodology in use by some contemporary Native American artists. We will be publishing Carlson’s essay next, but before that deep dive, we thought it might help to highlight a couple of local visual artists working within the Afro- and Indigenous Futurist veins. There are plenty of local Futurist talents working in other media as well—from the music of astralblak (formerly ZULUZULUU) and Moors Blackmon to Heid Erdrich’s recent collection of poetry, Curator of Ephemera. There is plenty to explore, but let’s begin with a few visual artists, in their own words. 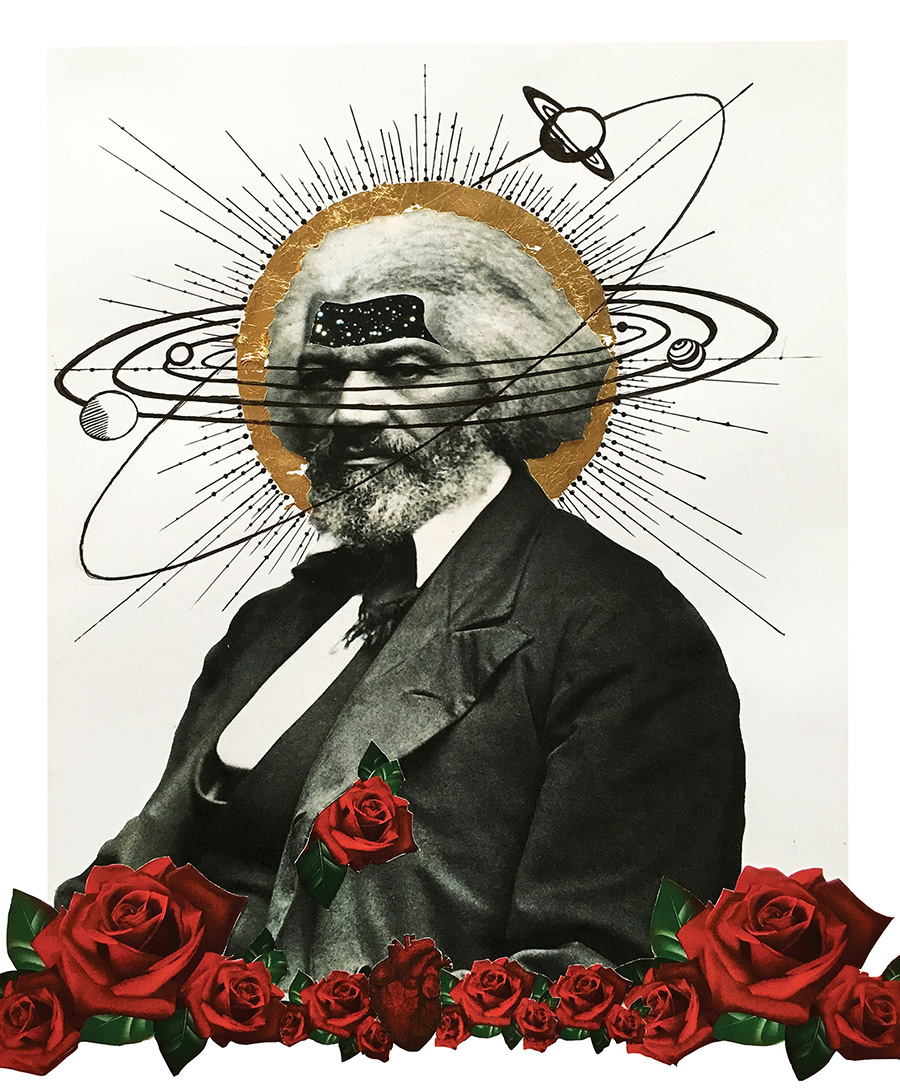 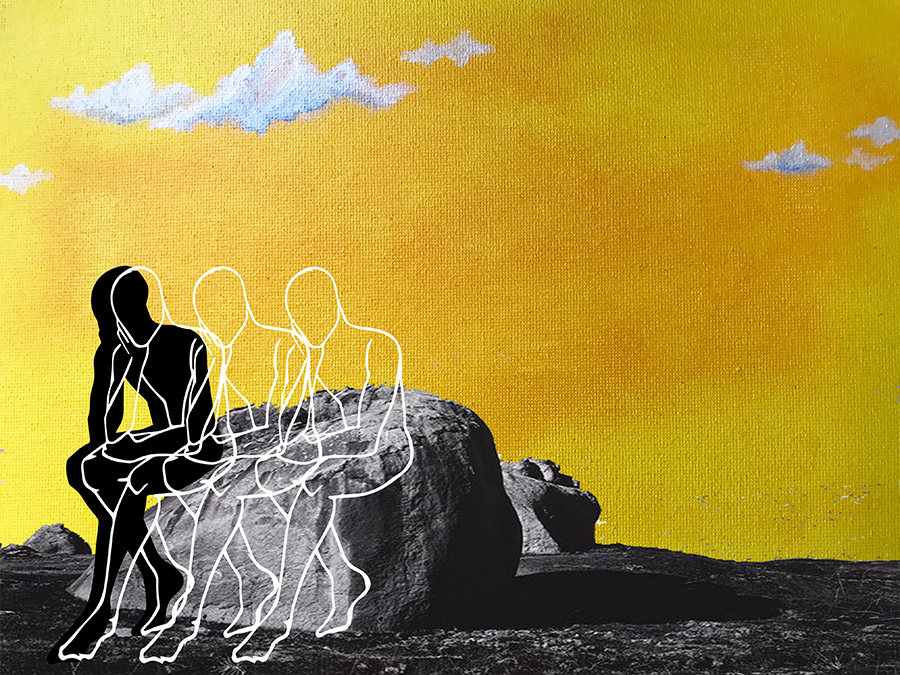 My artwork combines elements of Black history, identity, and political resistance — creating an Afro-futuristic look and story told through a feminine voice. My artwork acts to affirm women and Black folk of all paths, of our limitlessness, and our resiliency.

By creating imagery celebrating the liberated consciousness of Black revolutionaries throughout North American history, my work gives a voice to the ancestors of my blood —those forgotten, inspirational souls who paved the way for me to be a kind of healer through the realm of visual art. My work aims to critique not only the present-day dilemmas of Black people but also to re-examine and revise the events of the past, while looking to the future.

Using photographs of slaves and Black revolutionaries with cosmic backdrops, my mixed-media collage work references the history of slavery in North America and this group’s relationship with night skies, its moonlight, starlight, and soul-sickening terrors. It is this sacred work that I’m being called on to create.

For more on KNZ and her work, visit ogknz.com. Also check out this 2016 interview with the artist. 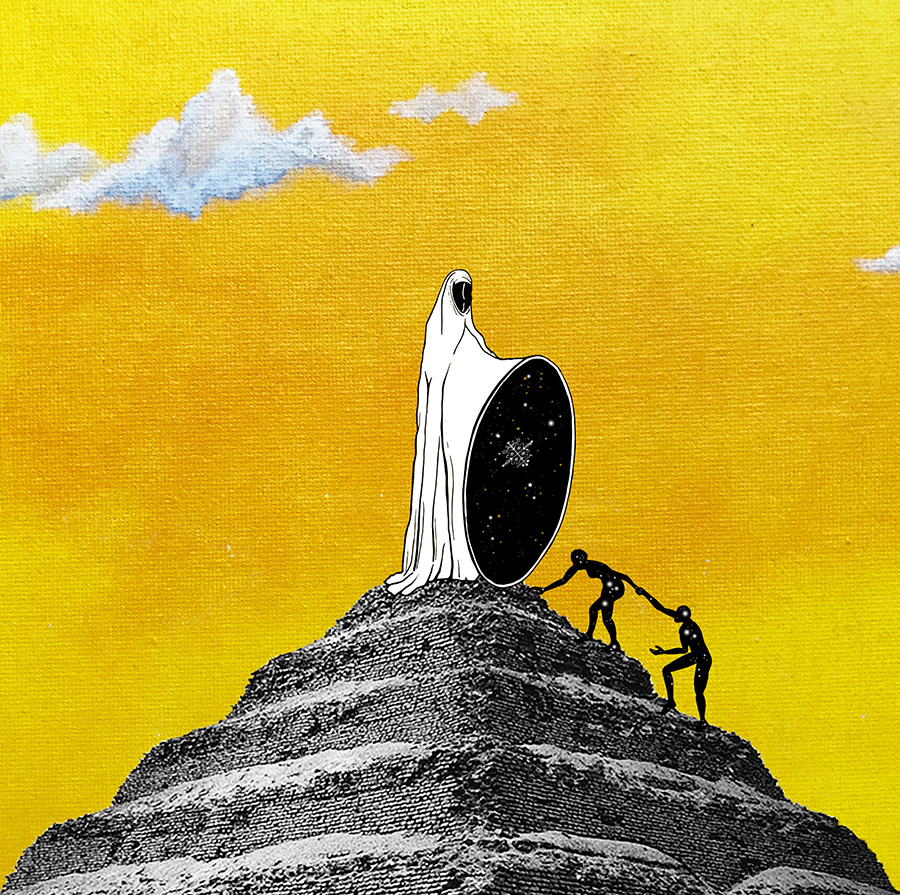 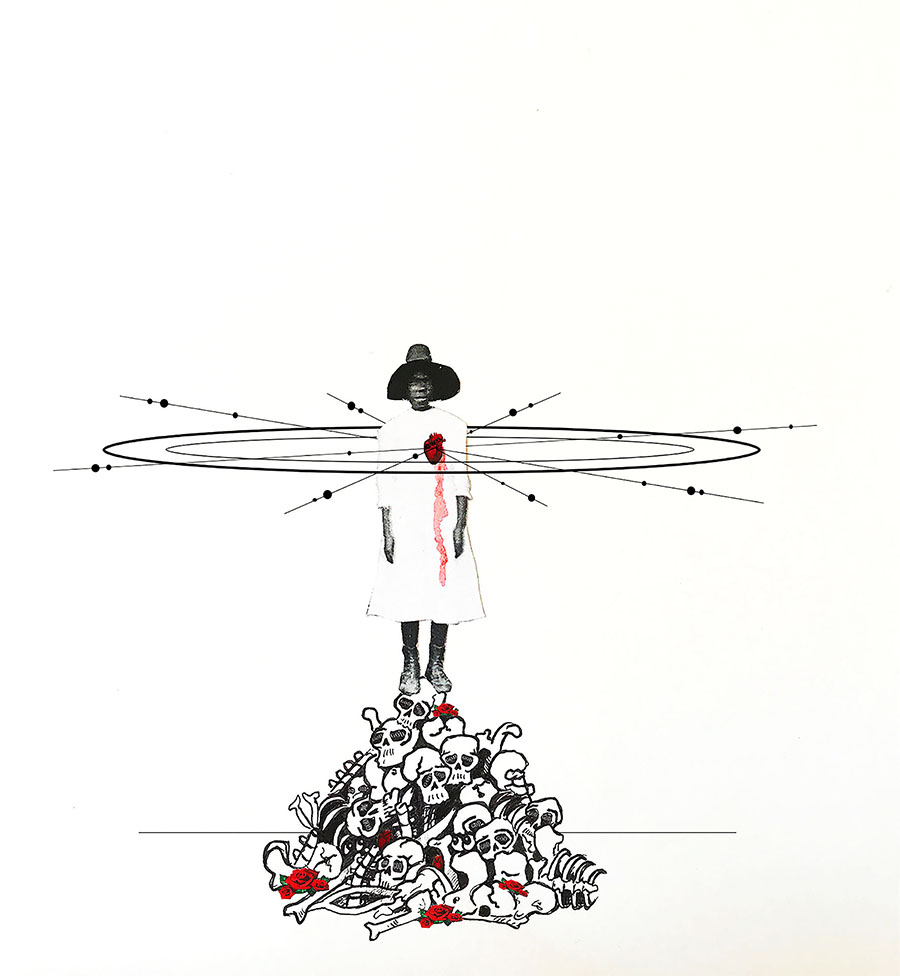 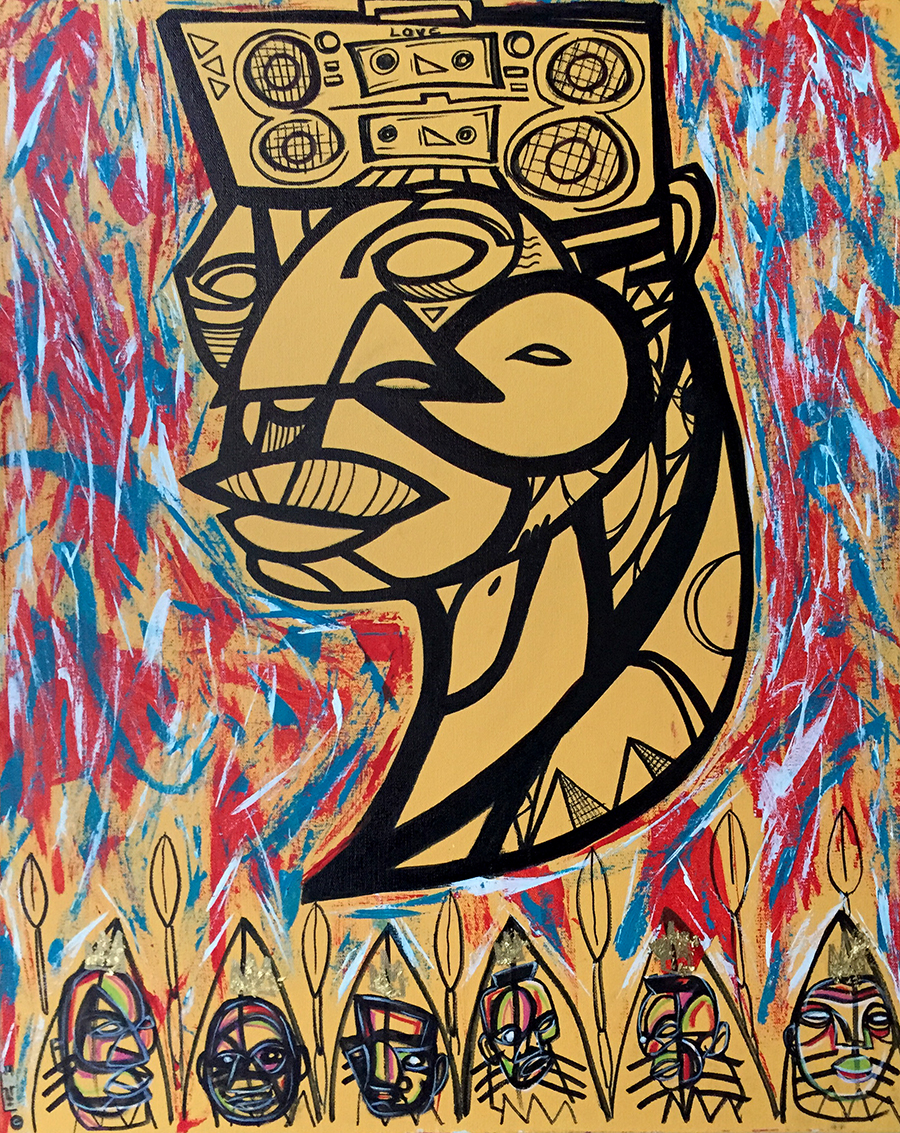 The Heavy Crown, acrylic on canvas

Ron Brown is a Minneapolis-based Hip-Hop illustrator. He brings forth a style he dubs “Afro-Anime," a hybrid of his artwork and music production. In addition to participating in the St. Paul Art Crawl and Uptown Art Fair, Brown also adds his artistic creations to athletic footwear, totes, and bags by way of hand crafted customization. His imagination is boundless and takes him places that people can enjoy and relate to. He has also been an active member of the community in Metro Area schools, working with children diagnosed with different special needs and also with those labeled as "at-risk" youth. "From children's books to high-end fashion,” the artist explains, “my artistic nerve is only satisfied by doing it ALL.”

Brown currently has a show on view through February at New Rules. You can see more of his work online here as well. 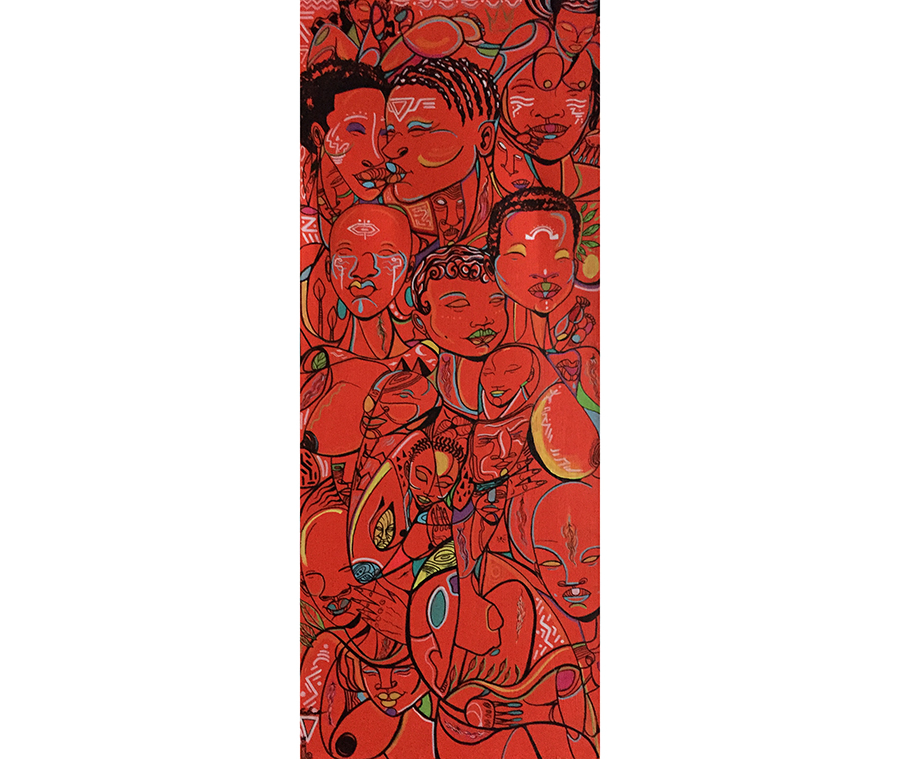 The Sweeter The Juice, acrylic on canvas 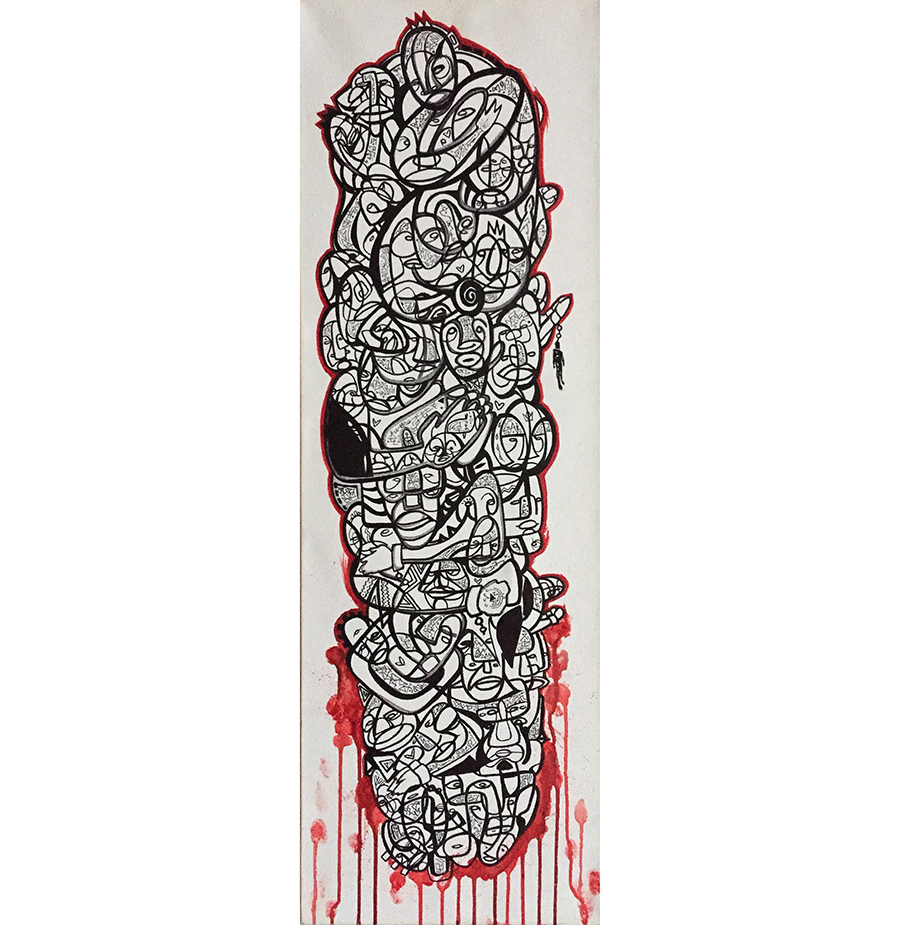 Black In America, acrylic on canvas 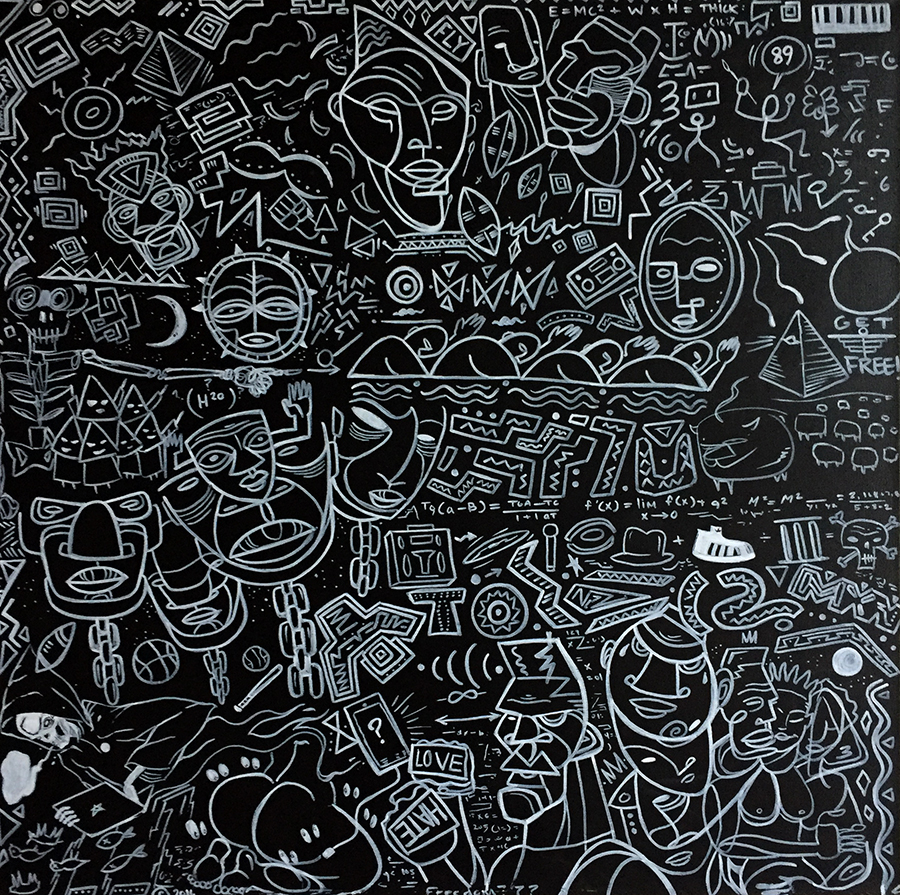 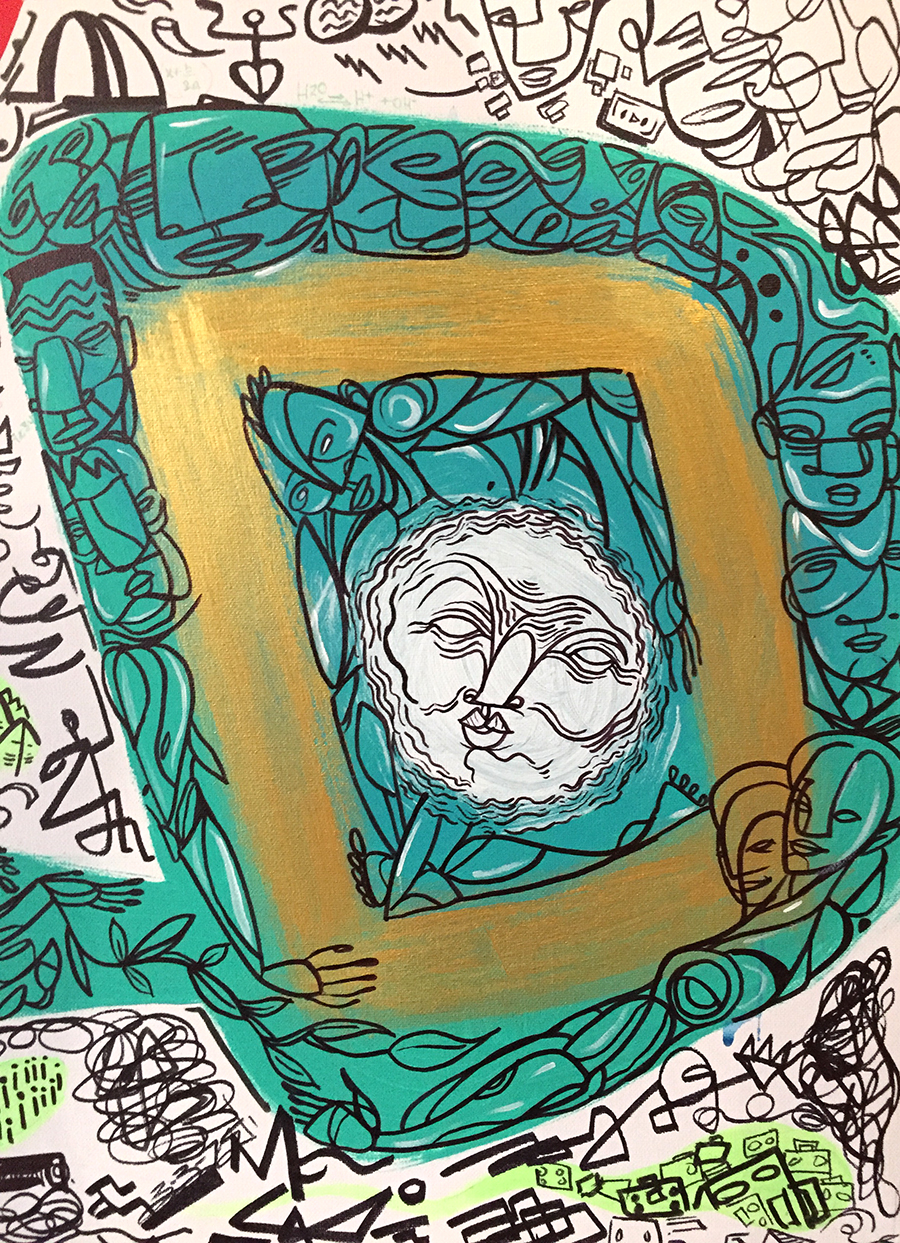 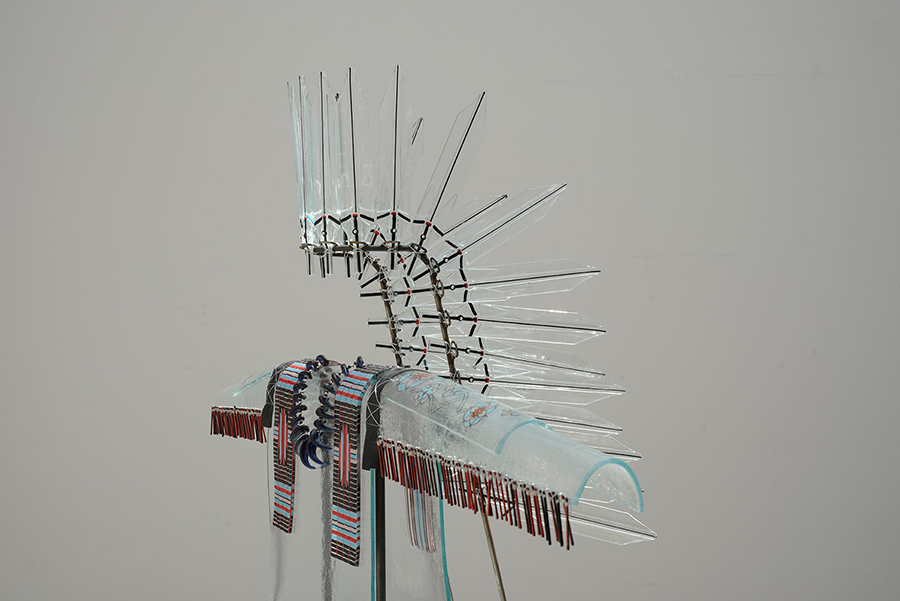 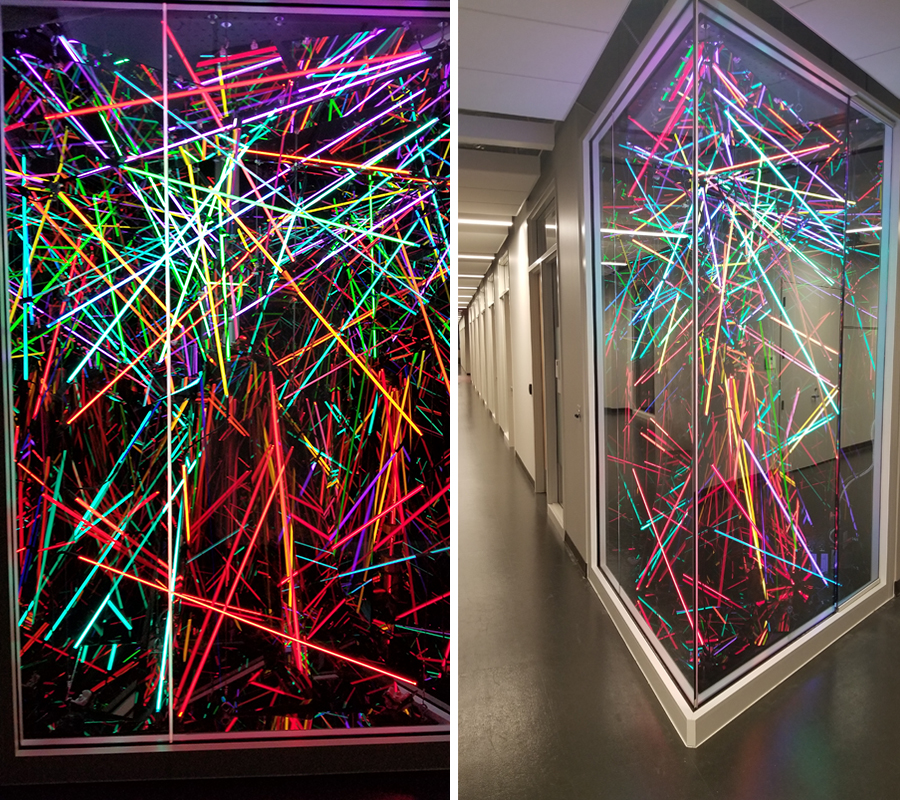 From the moment our eyes absorb photons of light to the moment the image is registered in the back of our brain, there is a tenth of a second delay. I believe that our spirits have no restrictions of time, and that tenth of a second becomes an eternity for them to perceive what we see. In this eternity is pure chaos of seemingly infinite possibilities, which I can only compare to what science calls “String Theory,” and the prediction of extra dimensions.  The “old Indian trick” is learning to listen to what your spirits are helping you to perceive. I can only explain it as tuning out “reality” and basking in the chaos of limitless imagination.

Born Anishinabe (Chippewa) yet raised by a Lakota man, I grew up around Lakota ceremonies. I have no special powers outside of the power to dream. Of the many ethereal places my dreams have taken me, the place it has taken me most consistently is my past lives and dimensions that have realities that can’t exist in our dimension. With this lifetime I have become a professional student that is skilled in almost every technical aspect of the arts, yet I am not a master of any trade skill. My pursuit of the fine arts started in 2006 when I had a year left to graduate with a degree in Visual Communications.  In 2006 I had a traumatic brain injury (TBI) that drastically changed my life; I forgot all training I had received pertaining to Computer Graphics animation and subsequently lost an internship possibility with Disney Pixar. At this time I was half way through a four year commitment to my “Sundance” ceremonies, and in my recovery I learned to mix my ceremonial experience and my art practice as a therapy to regain an understanding of reality.

I have always had a fear of being a cliché “Indian artist,” creating art that had literal representations of what popular culture believes is “Indian,” and worry about my work being labelled “Bambi Art.”  In my pursuit to be an Indian artist without using Indian imagery, I borrowed George Morrison’s philosophy that the “Indian Values” are inherent in my work.

Very few times in life have I done work with literal “Indian” imagery, and when I have I felt I had to defend myself from becoming a cliché. I let the influence of the “Museum Gaze” and popular culture control my work to the point where I let it dictate the use of imagery from my own culture. For my Master of Art show, titled “Consflustarmony, the confluence of flustered attempts to mix fine art and ceremony” in the spring of 2014, I created a piece titled “Chief Ego.” “Chief Ego” is a glass war shirt, glass headdress, and cast glass bear claw necklace; 4.5’ tall, 6’ wide and 2’ deep, it is a representation of my ego. In creating this piece I felt I had the power to proclaim myself a chief of the arts since I was soon to be awarded a Master of Arts.  Knowing that proclaiming myself a chief is exactly the opposite of how one becomes a chief, I found humor in my actions. Since there is no way for me in today’s society to earn the regalia I made in glass, I decided to proclaim myself not only a “Chief of the Indian Arts,” but warrior of the arts in both a serious and humorous light. For this show I also created “Ceremony Fire,” which was a contemporary piece made of one way glass and neon that actually worked to gather people around it and share stories.

After receiving my Master of Arts from University of Wisconsin Madison in the spring of 2014, I felt so empowered that I took the fear I once had of being a cliché and turned it in to a super power. Like Anakin Skywalker used his hatred of the Dark Side to become a Sith Lord, I have used my hatred and fear of being a cliché to become the most outrageous cliché I can fathom. In my quest I have taken my “Super Ego” to the level of alter ego, “Darth Chief, Mascot Hunter.” The reverberating effects of genocide are still cursing Indians. While I am aware that there are many serious issues to combat, equality and respect for Indians will never be attained until we are recognized as living people in today’s society, and not relics in the same category as pillaging Vikings and pirate raiders. 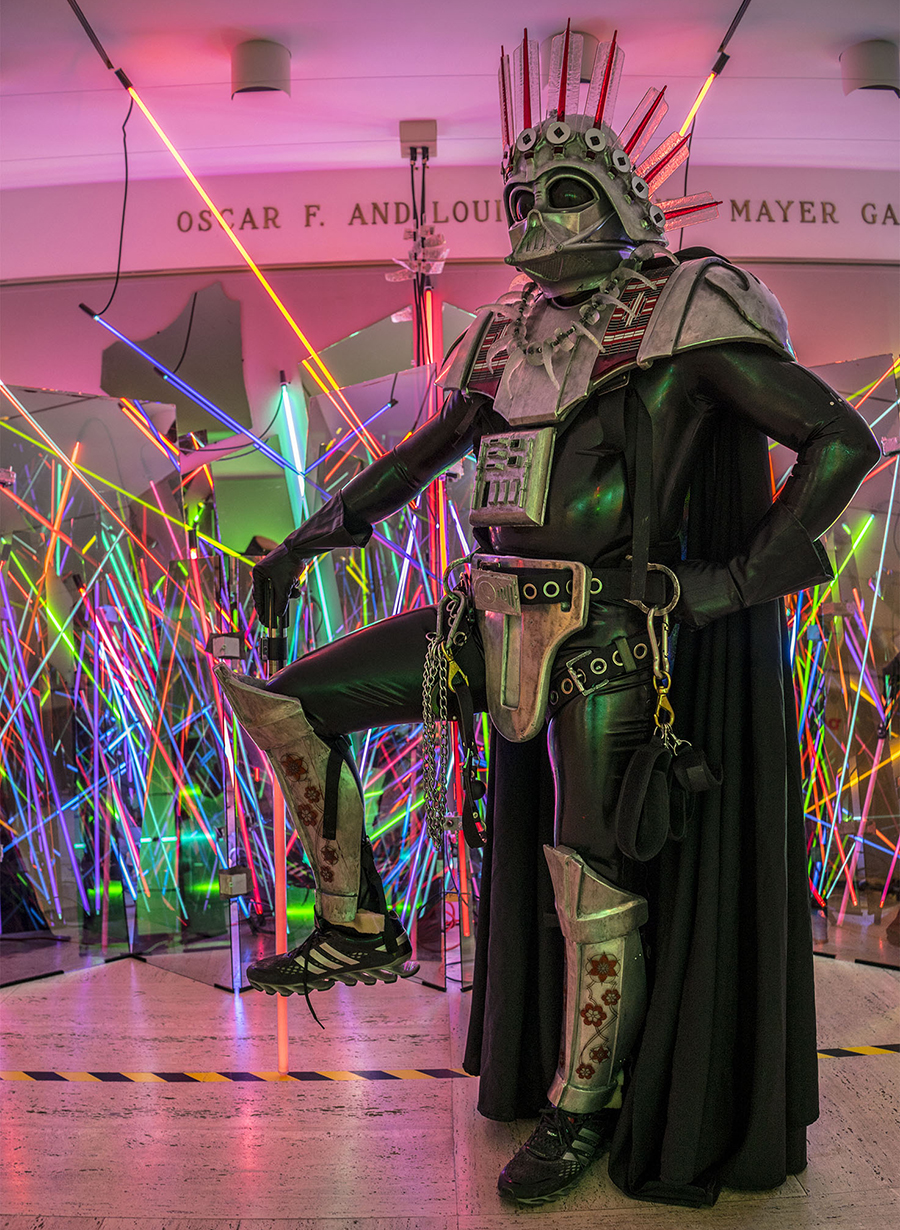 The use of my alter ego “Darth Chief” is in the vein of “Indian humor;” for increased understanding of what Indian humor is, refer to the book Me Funny by Hayden Taylor, or almost anything by Sherman Alexie or Vine Deloria Jr. Understanding Indian humor will allow for a greater comprehension of how complicating the use of “Darth Chief” actually is as it relates to Indian humor. If you are not familiar with the government policy of “Kill the Indian Save the Man” you won’t understand my reference to “Kill the Idiot Save the Fan,” so please, before you try to defend the mascots my alter ego defiles, do your homework. Indian Humor is a way for us to all laugh together so we can achieve a cultural balance of equality. It is not a means to pick a fight or perpetuate the stereotypes of Indian culture.

The coming out party for “Darth Chief” was held at the Chazen Museum in Madison, Wisconsin, and his first art battle was in a performance at the Minneapolis American Indian Center at the Indigenous Peoples Day Pow-Wow 2016. 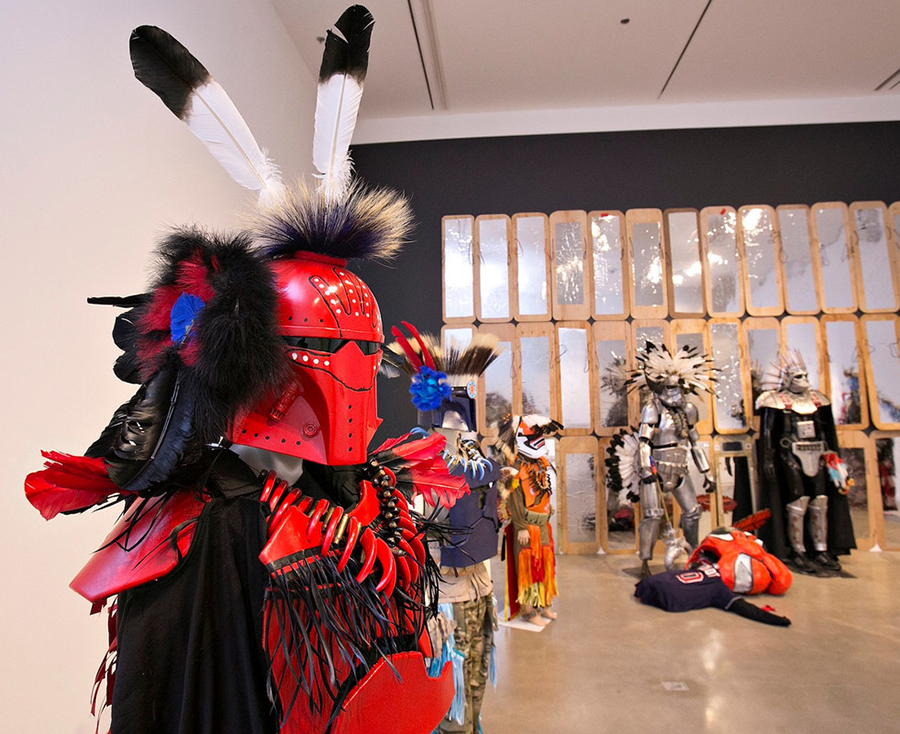 Stay tuned for our next installment: “A Mothership Connection: Past Futures of Resurrection and Absence” by Andrea Carlson.