Michon Weeks and Carolyn Swiszcz in Universe-ity at Space 369

Camille LeFevre takes a survey of the new exhibition, Universe-ity, on view throughout April at Space 369 in St. Paul 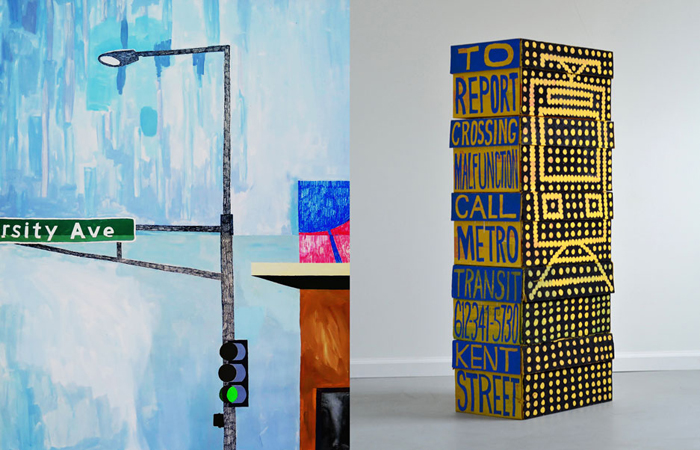 Consider, if you would, the familiar; the idea, adage, or common wisdom that the things we experience the most become invisible to us, that the quotidian becomes something that we take for granted, to which we no long pay attention. As philosopher Ludwig Wittgenstein put it, “The aspects of things that are most important for us are hidden because of their simplicity and familiarity. (One is unable to notice something—because it is always before one’s eyes.)” What re-awakens us to what lies before us, to what we pass by or walk through or hear or see on a daily basis, might be two things: change and/or art.

Take, as an example, the St. Paul neighborhood known as South St. Anthony Park. Bordered by University Avenue, Highway 280, Energy Park Drive, and Raymond Avenue, the small enclave of curved streets and mostly small homes was long a white working class neighborhood also ringed by a train switching yard, warehouses, and industrial buildings. That began to change about 10 years ago. A diverse array of families (in terms of age and generations, race and economic status, gender and sexual orientation) had already moved in and upgraded the housing stock. But coffee shops, microbreweries and mid-century vintage furniture stores also appeared. Some former industrial facilities were converted into artist housing. 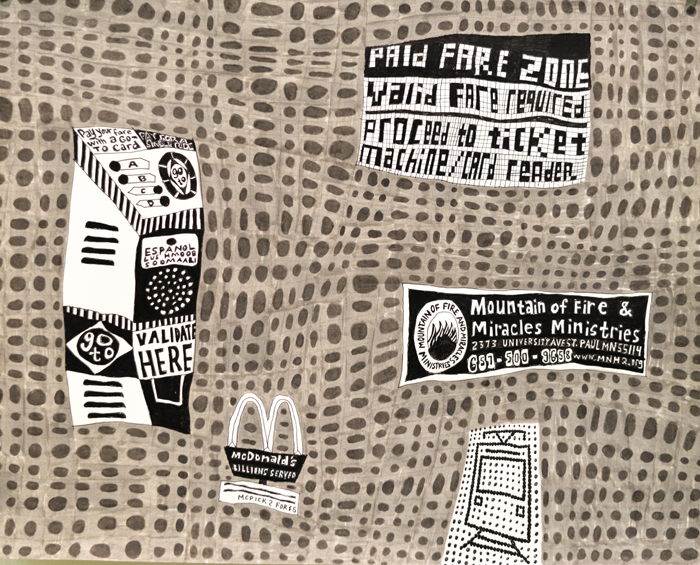 Then came news of the train: a new Metro Transit light-rail line down University Avenue connecting the downtowns of Minneapolis and St. Paul. Opportunity called. More restaurants opened and record stores, microbreweries, artists’ studios, design companies, and myriad other creative enterprises set up shop in empty storefronts and industrial spaces. The area around the neighborhood was rebranded as the Creative Enterprise Zone and expanded to include areas south to Interstate 94 and east to Prior Avenue. That’s a lot of change. Still, some retail establishments closed.

To walk down University Avenue and through the Creative Enterprise Zone today is to experience an urban fabric that’s a patchwork of old and new, renovated and dilapidated, vibrant and vacant, commercial and nonprofit. At one corner, signage for various ministries vies for attention in juxtaposition with Christian picketers outside Planned Parenthood and a billboard for “compassion and care” for girls—as if implying that the women’s healthcare services provided by Planned Parenthood are neither. Here’s where we get to the art part.

That corner—where Planned Parenthood, a vacant Pirtek hydraulic hose store occupying the curiously named Universe Building, a bank, and the Green Line light rail intersect—is where Carolyn Swiszcz has focused her attention for Universe-ity, a two-person exhibition with Michon Weeks at Space 369 in the Dow Building. Occupying one wall is Swiszcz’s giant mural (created in sections) of the Universe Building: a soft, thoughtful work in which finely wrought technical acuity and fast loose brushwork, realism and abstraction, blurred and defined textures coexist. 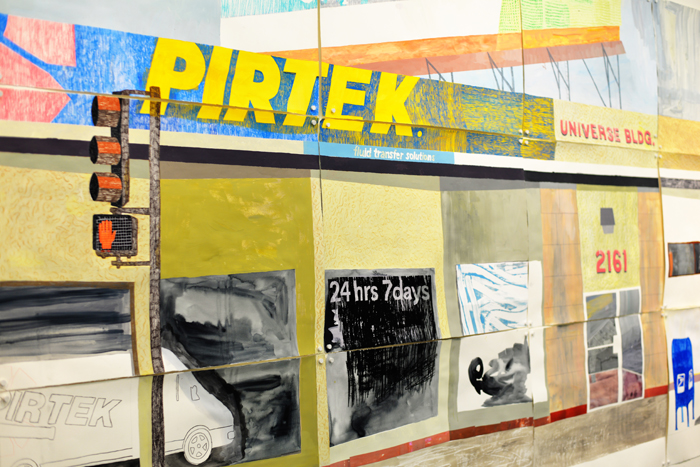 Talk about the quotidian: Despite its grandiloquent name, the Universe Building is the blandest of the bland, a beige one-story structure that, even though still brandishing the primary colors of Pirtek signage, remains a quintessentially unnoticeable, boring building. And yet, what Swiszcz has done with her painting is re-contextualize and de-familiarize the Universe Building. She’s called it out, made it the object of her attention and considerable artistic talent and given it a treatment that entices viewers to pay tribute to it, too.

Moreover, she’s included that portion of the billboard on top of the building that proclaims “compassion and care.” Below that, she’s painted one of the windows with the notice, “24 hrs 7 days.” Taken together, these phrases convey a humanitarian or even spiritual message that quietly defines the most commonplace of street corners, but also defies the warring pro-choice, pro-life activity nearby. 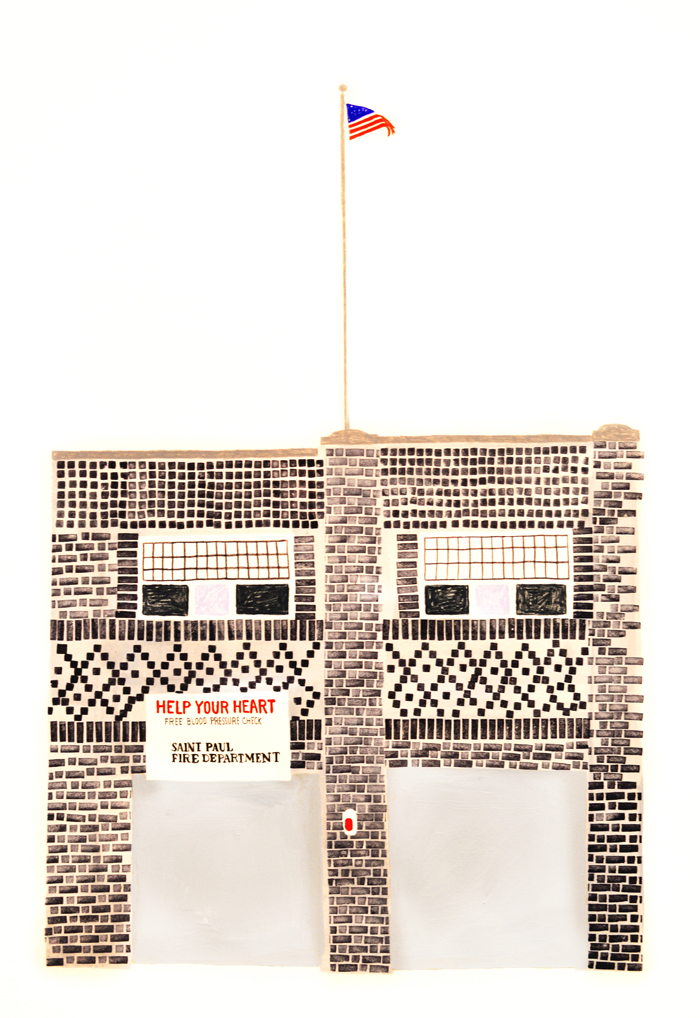 On another wall of the gallery is Swiszcz’s finely detailed iteration of a nearby fire station. The building’s banner, “Help Your Heart,” is also part of Swiszcz’s artwork. Once again, subtle and multiple meanings can be derived from her word play, in this case the message being not only physical and medical (the banner is for free blood-pressure checks) but also one of, well, compassion and care.

Michon Weeks, whose whimsical mixed-media works and sculptural installations are created from everyday stuff—stacks of Amazon delivery boxes, shoe boxes, cardboard, pieces of wood, and paper—also focuses on the area and uses messaging from the Metro Transit light-rail train line to similar effect. Her installations are towers of stacked boxes on which she’s painted images and instructions in a graphic style that recalls a playful form of street art combined with woodblock printing and sophisticated cartoons in an underground zine.

On one tower are Metro Transit’s instructions for buying and validating tickets—in English, Braille, Spanish, Hmong, and Somali—while on a different side are brightly colored backgrounds for gem-like shapes. On another tower, circles with lines through them to signify “no” contrast, on a different side, with Weeks’ delightful paintings of the things we like to say yes to—skateboarding, cigarettes, coffee, a cold beer, loud music—not allowed on the train. In her re-contextualizing of transit and the experience of riding the light-rail train, Weeks has generated symbols that embrace the diversity of riders served and convey a sense of magical realism that enlivens that everyday experience. 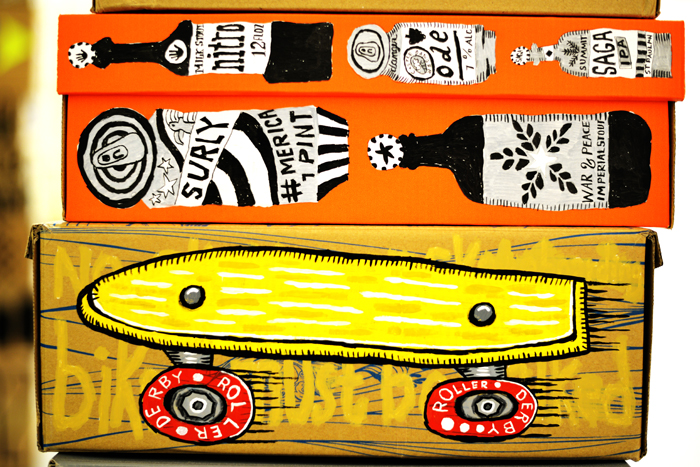 Weeks has also created a plethora of one-dimensional works gridded with “systems for abstraction,” as she describes them, and with simple, geometric outlines of the trains, fare instructions, or announcements in boxy lettering. In one of these works, she lays her imagery over a photograph of the train tracks down University Avenue. In another, Weeks juxtaposes the matrices and abstracted train imagery with painted, exaggerated faces. Weeks also distorts these matrices like a funhouse mirror might, further altering viewer perceptions of just what’s happening on that flat piece of cardboard or paper, as the dots, zigzags, and voids move kinetically across the surface.

Wittgenstein suggests that, in order to counter our tendency to take the familiar for granted, we should seek out ways to find amazement in the everyday. With their work for Universe-ity, Weeks and Swiszcz have done precisely that. Together, they’ve originated an outlook on one of the most humdrum, colorless, featureless stretches of University Avenue that brings it into clear relief. The show de-familiarizes and reanimates that familiar stretch with their fresh perspectives, aesthetic approaches, and purposefulness.

In other words, what the artists have done is create and capture a memory. Not only by collaborating with Nathanael Flink and Julie Buffalohead, the artists who run Space 369 and live in the neighborhood, and by collaborating with each other as they created the work, but by making work that’s integrally connected to its context. This is abundantly evident in the works Weeks and Swiszcz produced together. Works in which Weeks’ block text and swaying grids and Swiszcz’s color washes and textural layering combine in rich assemblages of luminous symbolism.

And so no one forgets, the artists also collaborated on a series of “boppers,” hammer-like tools constructed from found materials, or portrayed as such on other media, with which to tap oneself on the head—or not, as some are soft, malleable or sewn with fabric and others are built from wood. The point is the boppers are tools with which to remind oneself of daily tasks, such as not forgetting one’s cell phone or “to err on the side of grace.” Or to not take any moment, place, or person for granted. And to listen for the train. 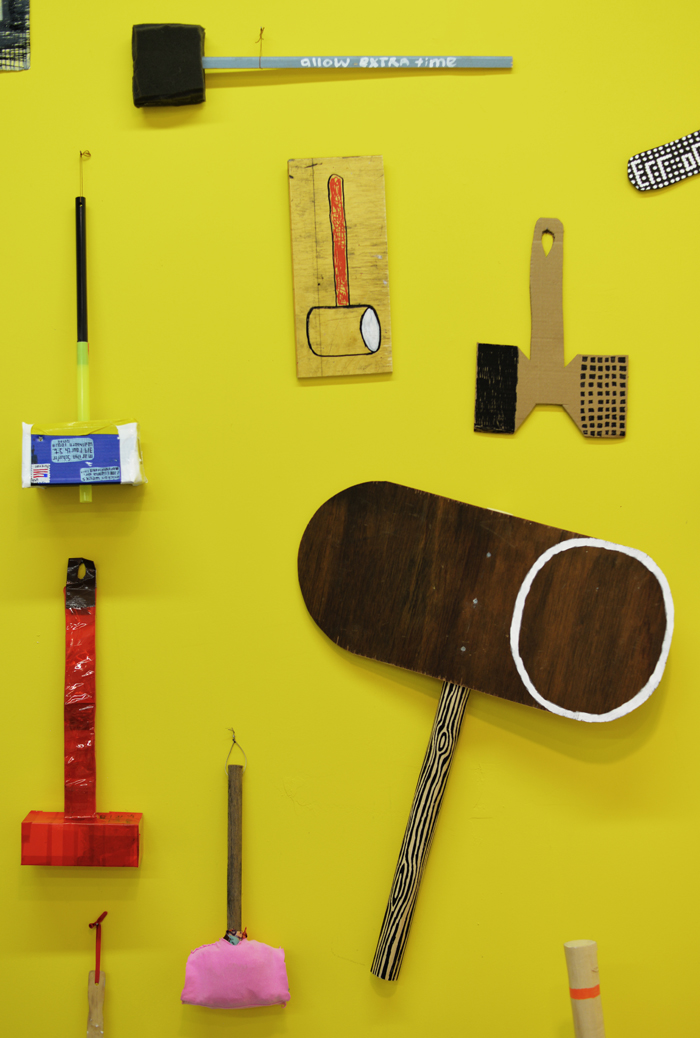