The group exhibition Worlding is a travelogue of sorts, a foray into the “world-making” practice of six different artists. Ranging from Nicole Gordon’s cartoonishly sinister landscapes to Andy DuCett’s obsessively intricate tableaux, from Andrea Carlson’s spare but sardonic pen-and-ink vistas to Sarah McPherson’s funny, cerebral take on facsimile, the worlds on display here vary quite wildly in scope, tone, and media. It’s like a collection of novels, all different genres packed together on the same bookshelf. (Or VHS tapes perhaps, as in Preston Drum’s large, immersive cardboard installation.) 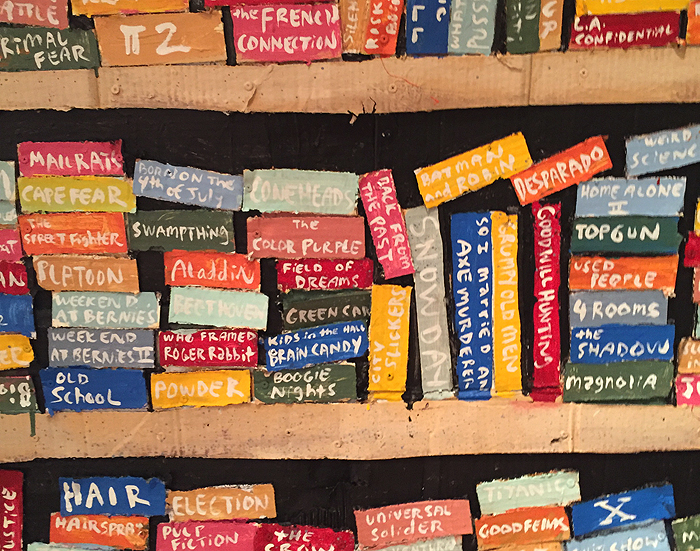 But there is a through-line here, not only of world-making, but of craftsmanship and honesty. The work is true to the individuals who made it, showcasing their humor, their politics, their childhoods, and their skills as painters, draftsmen, and sculptors. You should make time for each piece in the show, sitting in Drum’s surprisingly comfortable cardboard armchair, getting down on the floor to explore DuCett’s childlike installations, letting the scale of Gordon’s paintings envelope you. These are trips worth taking.

The exhibition’s co-curators, Patrick K. Pryor and Kate Casanova, took the time to talk with me about putting this show together and what role artists and curators have to play now as the “real” world faces its own upheaval and remaking.

RW: First off, in terms of the nuts and bolts of putting this show together, how did you decide on these six artists? Each of the artists approaches the idea of “world-making” in a very different way, creating their own distinctive settings and narratives. Did you set out with this theme in mind, or were you surprised to discover it as a recurring motif in all of their work?

PKP: Kate and I each made a list of artists whose work interested us in different ways. We put our lists together and started talking about our interests and of the possibilities. Eventually we started to find that certain artists were "worlding" and were making work that was exciting to us. This initially came as a surprise because we were not looking for it per se. We discovered it. We felt the idea and the works had possibility. We felt certain artists were doing work that was rooted in a personal narrative as well as welcoming the viewer into another world, and we started looking for other additional artists that were using different means to explore in a similar manner. 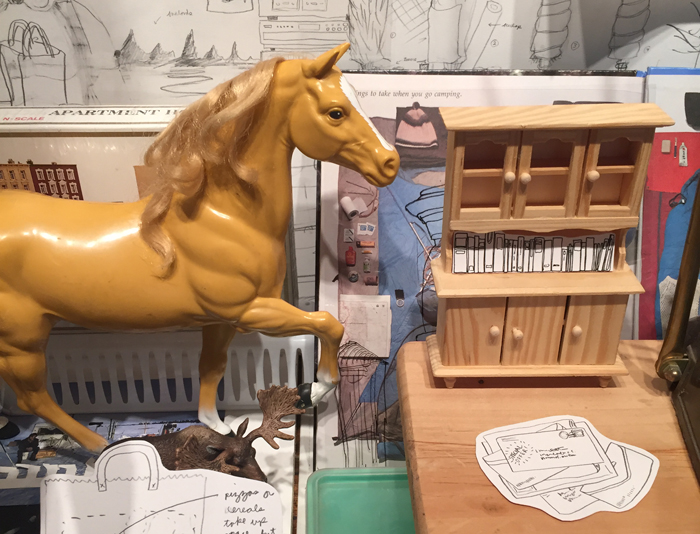 Andy DuCett, This Is All For Now-More Will Be Added As Time Goes On, So- (detail), mixed media installation.

RW: Can you speak to the idea of curation as a collaborative effort, both between curator and artist and, in this case, between the two of you as well? Were there any challenges or benefits to working together that surprised you during the process?

PKP: I felt that Kate and I collaborated really well. She could have totally done this show without my input, and I am really happy to have had the opportunity to be engaged in conversation with Kate, with the artists, their work, and with the space inside the gallery. There were no surprises — except that it all went along so well — there was delight in being on a journey of exploration and curation that reflected our individual artistic practices as well as, it seems, the practices of the artists that are included in the show. In that way, I believe the show is as much about exploration (in all its manifestations) as it is about other worlds.

KC: Curating this exhibition with Patrick was such a pleasure. As artists, we approached the process of curating in a similar way to art-making: as an act of discovery. We have our own particular aesthetic, and collaboration is about being open to the other person's perspective. I think the show itself is the biggest surprise to me! It isn't a show I would have come to on my own. It is truly born out of many conversations with Patrick from which it emerged, and I think it is so much stronger for that.

RW: What does it mean to you to be a “curator”? What responsibilities do you feel you have towards your artists and your audience?

PKP: I feel we have a responsibility to let our audience in. To be guides. To be facilitators, and to be asking questions of the works, of the viewers, and of ourselves rather than giving answers. Finally, to be co-discoverers with audience and the artists.

KC: As a curator, you are assuming a role of power through the act of selecting artists. None of the decisions a curator makes when selecting work are neutral. One of the things that was important to us, especially when talking about the idea of creating worlds, was to consider what it means to curate with diversity in mind. Of course these 6 artists only represent a slice of people creating work today and we don't assume that they inherently speak for any particular group, but we did think about such things as gender, race, and professional level and how identity shapes the particular perspective of each artist. The limitation is that we are curating from a perspective constructed by our identities and acknowledge that a show facilitated by someone else would inevitably be different. 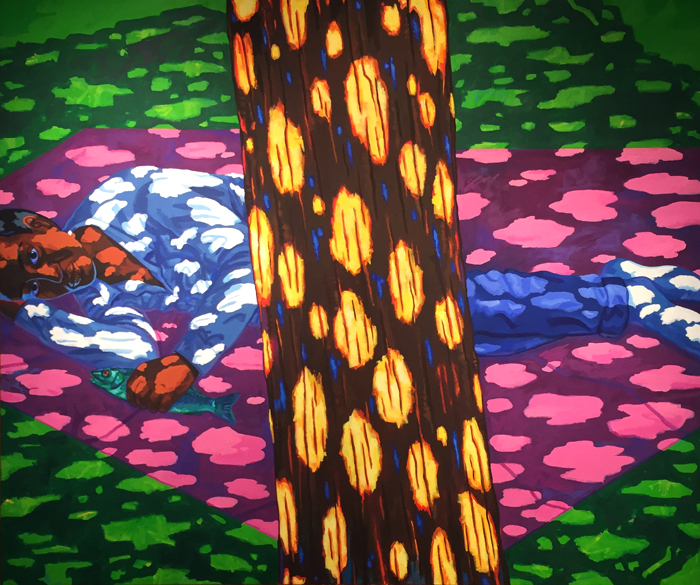 Lamar Peterson, A Young Man With a Fish (Version 2), oil on canvas

RW: There’s a lot of humor in the show but a lot of darkness as well. Even among all the bright colors and childhood toys, there are undercurrents of wide-eyed foreboding, household grotesquery, anti-imperialist anger, and obsessive nostalgia. Can you talk about some of the artists’ particular areas of interest and how they play off of each other? Do you find the show to ultimately have a singular voice or message?

PKP: I think that humor and darkness are great partners :)

KC: The show is bright, approachable and dense with lots of imagery to hold one's interest on a cold, snowy day. With that said, there are certainly dark undertones. If anything, I would say that through creating worlds, these artists are asking us to question what in our "real" world is constructed.

RW: Much has been made recently of contemporary Americans living in a “post-truth” world, in a time when we are able to hand-pick our facts and create our own worlds perhaps more easily than ever before. How did current events factor into your decisions here (if at all)?

PKP: I think that we are asking ourselves these days - what is real and what is not? What is true? What can I believe? WHO can I believe? And the notion that everything is made up — our currency, our markets, the value of art, the words of others — has been a recurring cultural theme since The Matrix in 1999, so I think that probably had an effect on us.

KC: Like Patrick said, there are so many things that already exist in our culture that make us question not only what is real, but what is the motivation behind objects and systems. Who benefits? We had already settled on these artists before the the results of the election, but I think more than ever, the idea of "reality" has been forced into the forefront of public discussion. Whether it's fake news or living in our own social bubbles, Americans are constructing their own microcosms like never before, and that anxiety that comes with encountering the unknown is really palpable as many people are asking themselves if they really know their fellow citizens.

RW: What do you think is (or should be) the relationship between art and activism in the age of Trump?

KC: Artists need to keep making. We act as a mirror for society's subconscious. Whether artists pursue activism in their art-making, in their everyday lives, or both, it is necessary for the health of our democracy. Artists already have an audience, so it is our responsibility to use our voices to promote the change we want to see. 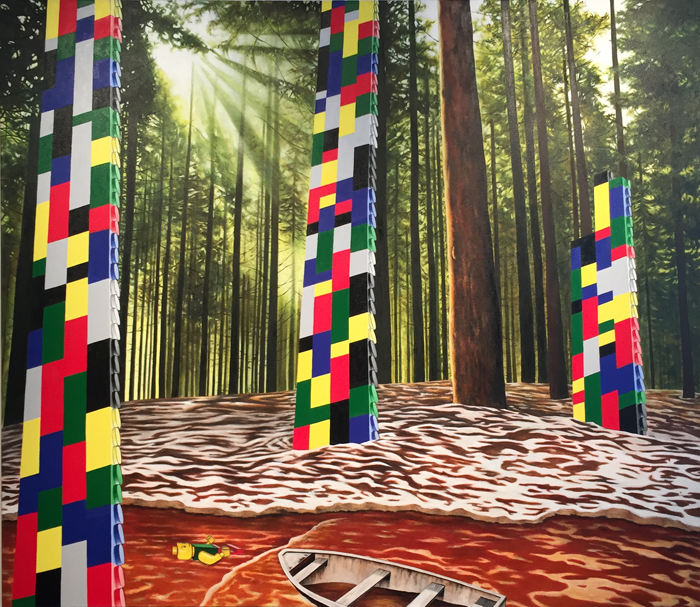 Nicole Gordon, How to Harness the Power of Your Inner Rowboat, oil on canvas.

Worlding is on view now through February 18th at Kolman & Pryor Gallery with a reception for the artists on Saturday, January 21st, from 7–9pm. Gallery hours are Saturday, 12—4pm, the First Thursday of every month, 5—9pm, and by appointment.