The artists in Transition and Decay share an interest in cycles. Ryan Fontaine reveals his cycle of artistic production through a series of paintings linked by process and modes of creation. Andrew Mazorol observes cycles of life and the transcendence beyond death through a funerary narrative, while geometric landmasses collide with gestural strokes giving a glimpse of weather patterns in Minor Sanchiz-Fung’s landscapes. 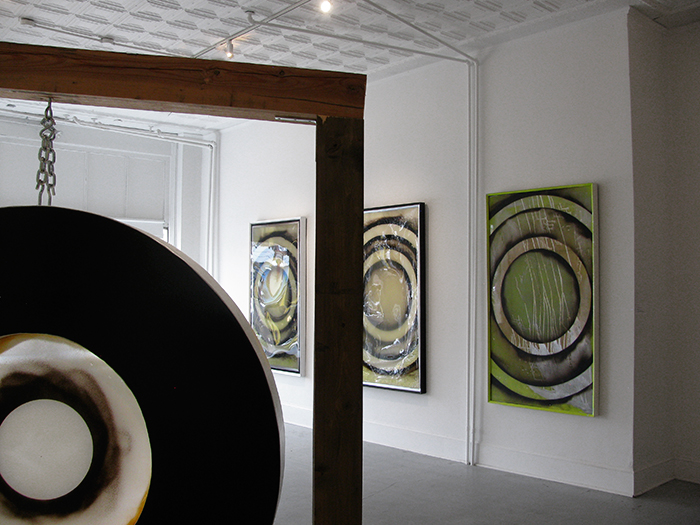 There are a few works throughout the exhibition that seem to be emitting most of the energy, first of which is a series of three paintings by Ryan Fontaine titled Initiation, simulation, and The Relentless Perfection of the Inauthentic. These three large rectangular paintings intercept the viewer from the entryway, black concentric circles radiate outwards until the picture frame cuts them off. The images are crinkled and hazy like the overspray from a spray-painted stencil. Each painting is covered in a layer of epoxy resin with a slight lime green tint creating a swampy filter over sections of the background. At first glance it appears to be another bland triptych, one image repeated throughout, altered slightly in color and scale. However, as the titles imply, these works are about the cycles of production that an artist goes through and perhaps the avoidance of generating another bland triptych. An idea sparks the creation of a work, once the work reaches a satisfactory state it’s hard to resist the urge to replicate, or in Fontaine’s words Simulate. The order in which these paintings were created is crucial in getting an accurate interpretation of the work.  What I will refer to as the original painting titled Initiation is hung between two nearly identical paintings. However, the painting on the left is actually a photograph in disguise. The reflective surface of the resin makes it difficult to tell whether the crinkles and folds are physically present, or just an illusion within the photograph. The artist leaves a visual hint by deciding to give Simulation what appears to be an extra frame. Once again after close inspection, there is only one frame bordering the work. What seemed to be a duplicate is just part of the photograph of the original framed work. Fontaine’s paintings require total engagement, visual information can be deceptive at times, but subtle cues guide the viewer onward. To the right is a painting titled The Relentless Perfection of the Inauthentic, the authentic being the original painting in the middle. This is the only work that differs in scale, which suggests it was rendered by hand. The color pallet has also shifted with a heavier use of neon including the frame. The title references the mental space of an artist attempting to replicate a previous work. It is clear that Fontaine intends to comment on the cycle of production, but the work itself comes across as perceptive. The paintings are not just in conversation, but reflecting on one another, acknowledging their linkage through the process of creation. 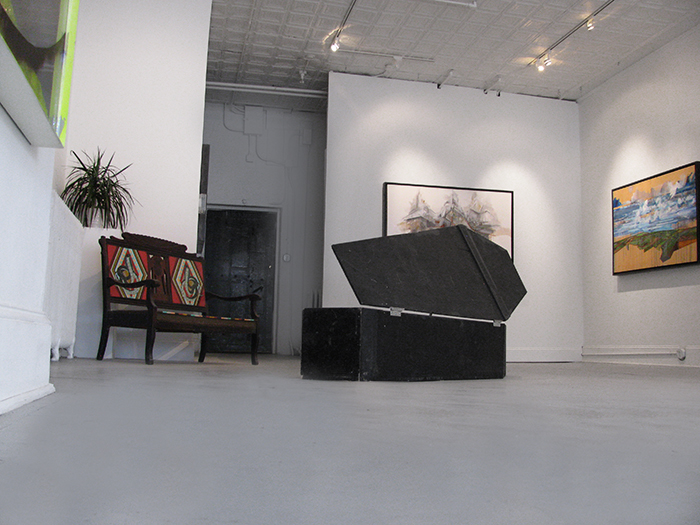 The second work drawing most of the attention, partially due to its scale, is a hanging sculpture by Fontaine titled Calendar. A large circular form hangs between two wooden supports which are joined by a cross beam in the style of an ancient Stonehenge. The whole structure stands over 6 feet tall. The center is filled with fogged Plexiglas, a hazy black circle has been spray painted on one side. The outer ring of Plexiglas is painted yellow and is encompassed by another black circle, reiterating the concentric circle motif present in his paintings. The title as well as the radiating circles seem to make a connection with ancient Mayan calendars, however Fontaine’s Calendar is devoid of predictive information. Rather than a tool that allows one to see future events it acts as a dark void in time. 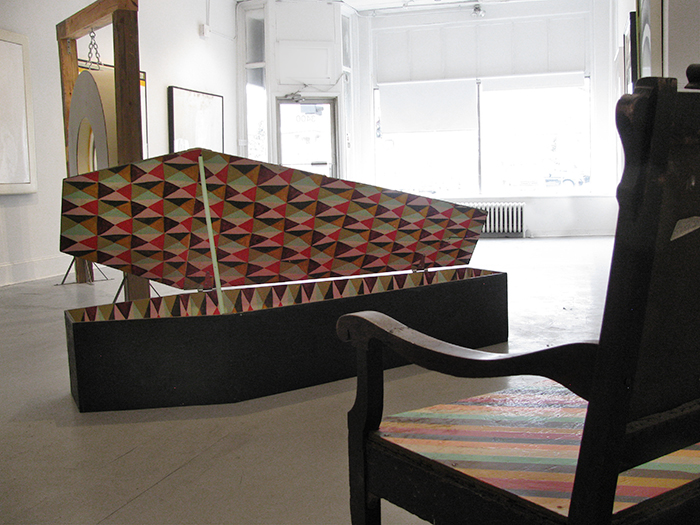 Calendar shares floor space with two sculptures by Andrew Mazorol, a black coffin with a colorful harlequin patterned interior, and a love seat sharing the same color scheme only in stripes. Each object has been customized to fit a very specific taste. They are the kind of things only their possessor could love. Imagining the type of person or culture that might desire such objects is useful in uncovering the narrative behind Mazorol’s work, especially considering the coffin as a place to rest for eternity, in this case an eternity filled with technicolor harlequin print and red velvet. The love seat directly faces the coffin as if its purpose is to seat onlookers during a funerary service. Two cobra snakes have been painted on the backrest, they gaze at each other stoically rather than outwards towards the coffin. The vacancy of the love seat as well as the empty coffin and harlequin print suggest a slightly optimistic narrative, perhaps a resurrection has taken place rather than a burial service.

At the back end of the gallery hang several landscape paintings by Minori Sanchiz-Fung all of which are abstracted to some degree and mostly broken into geometric shapes. The first painting titled Oceanic is of a coastal setting. The separation between land and water is somewhat blurred, but a distinct gathering of charcoal clouds loom above. The scene is interrupted by a number of melodramatic drips running down the canvas, a time worn cliché that cannot go unnoticed. The drips persist throughout the four other paintings increasing in number as well as triteness. On the opposite wall is another landscape done on two joined wood panels. There is a more decisive form of abstraction at play here. The sky is broken into rigid streaks of blue and overlaid with gestural strokes of white. An angular mass of land below is sectioned into various plots of green and brown, like a birds eye view over farmland. It floats in the mid section of the painting like a computer-generated map that can be rotated and flipped on its axis. The drips of paint make another appearance, distracting from the dialogue between gesture and geometry, a third and unnecessary variable. 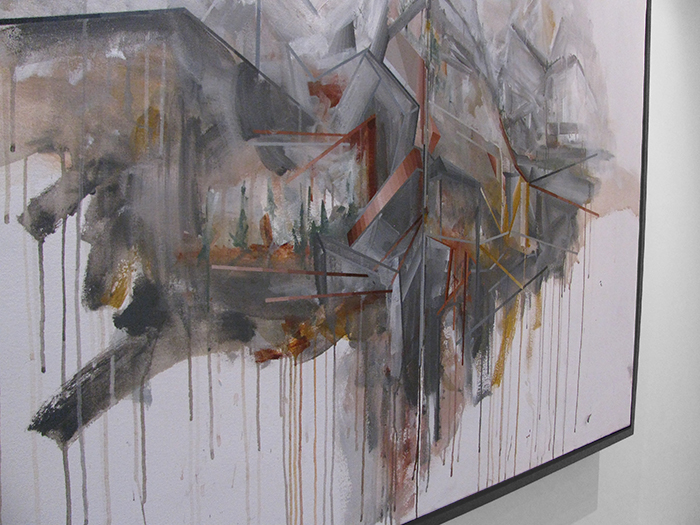 When looking at Fontaine and Mazorol’s work the word cyclical comes to mind, which seems more appropriate than the exhibition title Transition and Decay. Language also plays a crucial role in Fonntaine’s work. Titles such as Initiation, Simulation and The Relentless Perfection of the Inauthentic speak to the continual and obsessive cycles of production the artist goes through. At the risk of arguing semantics, cyclical feels like a more accurate descriptor of Fontaine’s practice. His relentless standards of perfection imply no signs of stopping but a continual cycle of creation. The intensity of Fontaine’s work produces forward momentum, allowing no stagnant moments for decay to begin. While Fontaine’s work commanded a majority of the exhibition space Mazorol’s Harlequin print coffin and love seat created an indelible image. Typically an empty coffin would make a haunting impression, but Mazorol pairs vacancy with exuberant colors alluding to a second life rather than death. Decay has missed its opportunity here as well. The body transcends elsewhere, a resurrection has taken place, the cycle of life continues.

A closing reception will be held for Transition and Decay on Thursday, Feb 11th 6PM - 9PM. See the event listing for more details.