It’s funny: when you google “pinch,” the first two definitions that come up describe the two bodies of work in this show almost perfectly:

1. Grip (something, typically someone’s flesh) tightly and sharply between finger and thumb.

2. Move one’s finger and thumb apart or bring them together (on a touchscreen) in order to zoom into or out of an image, activate a function, etc.

Terrence Payne’s large-scale oil pastel drawings embody the first definition in all of its bruising physicality and aggravated playfulness, while Amelia Biewald’s collection of much smaller mixed-media watercolors depend directly on digitally-manipulated smartphone photography for their source material.

When you first walk in, Payne’s colors hit you immediately.  Bright reds and yellows are jumbled with blacks, teals, and pea-soup limes, the colors made all the more vibrant next to the off-white, grandmotherly ivories.  And the subject matter initially throws you off as well: vacant, droopy white women with cartoonishly bundled hairdos in one drawing next to identical cowboys half-heartedly wrestling in another; a tangled pile of uppercase letters hanging opposite a large composition of intertwined, multi-colored hands.  The cumulative effect is obviously humorous and visually quite enjoyable, but you may find yourself, in the first few minutes of taking it all in, wondering just what the hell is going on here. 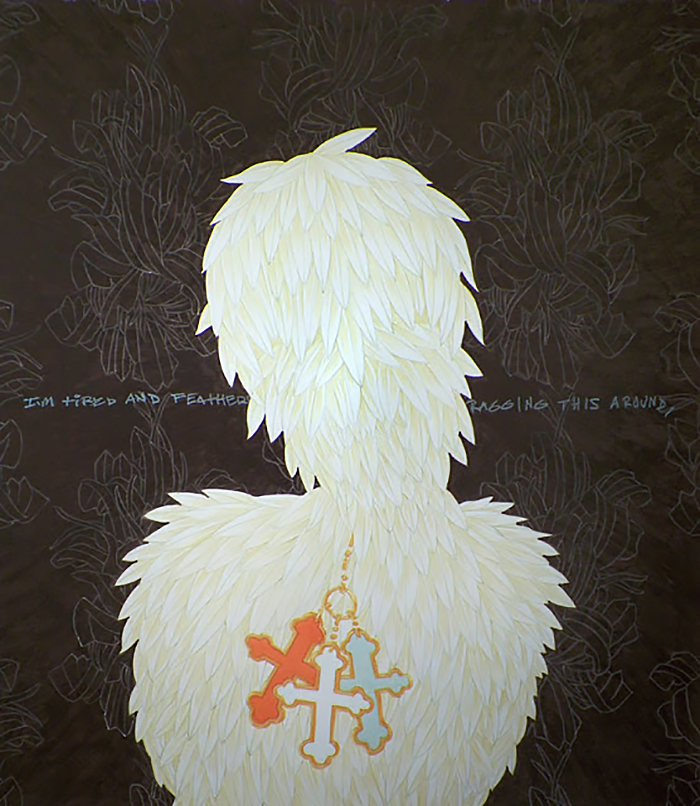 Terrence Payne, I’m Tired and Feathered from Dragging this Around

In moments like these (and these are my favorite kind of moments in art shows), I find that it helps to step back and notice what is getting repeated.  In this case, several thematic elements jump out.  Every one of the pieces presents a singular subject over a patterned background with a hand-scrawled sentence running between the two.  Now it starts to make sense.  This show is a twisted take on commissioned portraiture, complete with baroque wallpaper and this repeated, droopy woman, whom Payne describes as more of a re-used mannequin than a single recurring character.  She appears in various guises, personifying different struggles and character flaws.  In the show’s funniest piece,  If Smarts Were Bullets Then No One Would Ever Get Shot, she is a pair of gun-toting twins, one part Thelma and Louise, two parts Grey Gardens.  Their necklaces say it all. 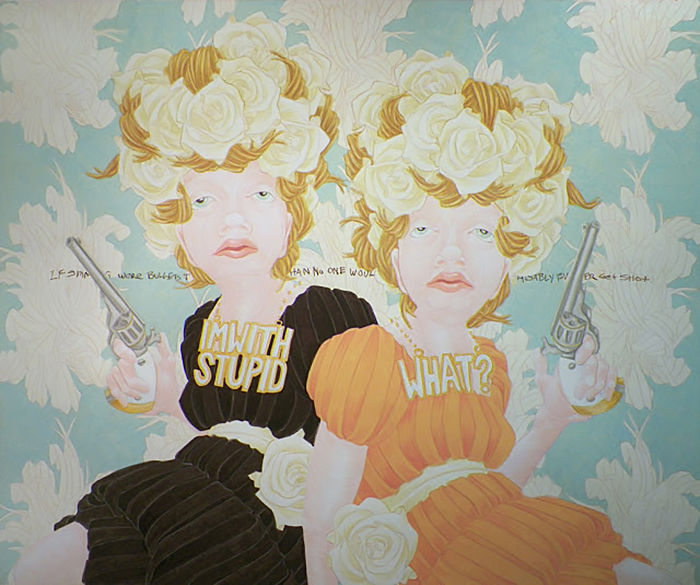 Terrence Payne, If Smarts Were Bullets Then No One Would Ever Get Shot

Suddenly the other drawings start to make sense as bizarro portraits too, including even the massive jumble of letters.  Payne himself describes these pieces as individuals and the whole body of work as a community of sorts.  Just like any good neighborhood gossip, he treats his subjects with both judgment and empathy.  Deeply cynical but cartoonishly funny, the scenarios and characters here tackle various power dynamics: sex, friendship, identity, religion, luxury, community.  I would recommend spending some time with them, not least of all because they’re actually quite beautiful, too. 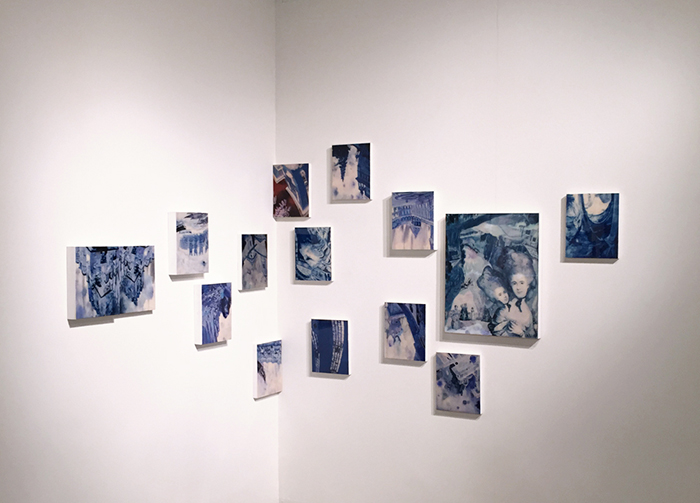 After all of this large, bombastic work, Amelia Biewald’s installation gives you some breathing room.  Her work in the show consists entirely of small-scale blue and white images installed sporadically around the space, some clustered in the corners, others front and center holding the walls by themselves.  Normally a mixed-media installation artist, Biewald recently took part in a residency at Art Garda in northern Italy.  There she tapped in to the history of 18th century art tourism and went on a Grand Tour of her own.  Except that where previous travelers might have used sketchpads or easels to record the stunning architecture and landscapes, Biewald simply used her iPhone.

Upon returning, she manipulated these images both in Photoshop and then with watercolors, creating this series of dreamy, irrational travelogues.  From afar, the strictly blue and white color palette immediately calls to mind blue china.  Indeed, the clusters of small pieces almost look like collectible plates on display atop an old armoire. Up close, though, they more resemble upside-down, water-logged family slides, tightly cropped in their compositions and inexplicably reversed in their orientation. 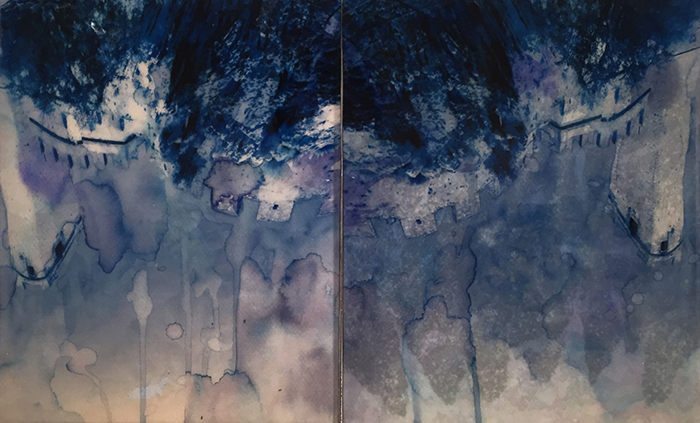 Often reproduced upside down, the domes, colonnades, and cathedral walls of northern Italy droop and sag like film negatives under heat, bulging from Photoshop tinkering and wet-on-wet paint application.  Incredibly subtle hints of purple, red, and yellow emerge from the ubiquitous blues and help establish a ghostly, elegiac quality.  The best pieces here, to my eye at least, make heavier use of the watercolors with drips and runs and blobs of ever-so-slightly different blues. 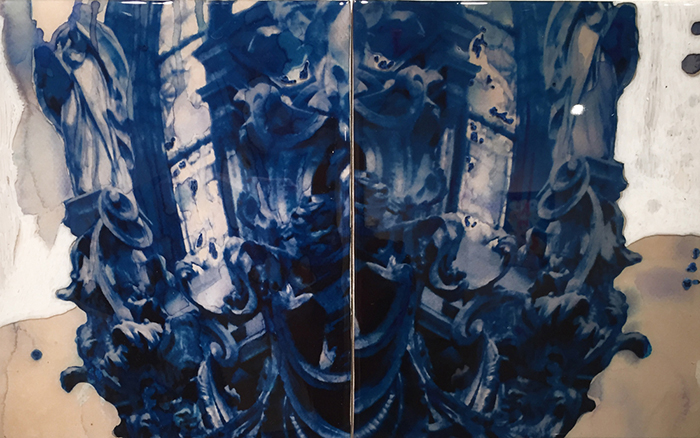 Among the inverted structures and gauzy atmospheres, the occasional digitally-collaged figures suggest forgotten stories, either of the locals or the tourists themselves.  Even the layout of the work has a narrative element, as though certain locations inspired a flurry of photography while others only warranted a single image.  Thanks to the titles, we know the actual locations documented in each piece, and the work ultimately feels like washed-out postcards from someone else’s European vacation.  The memories are right there, but just out of reach.