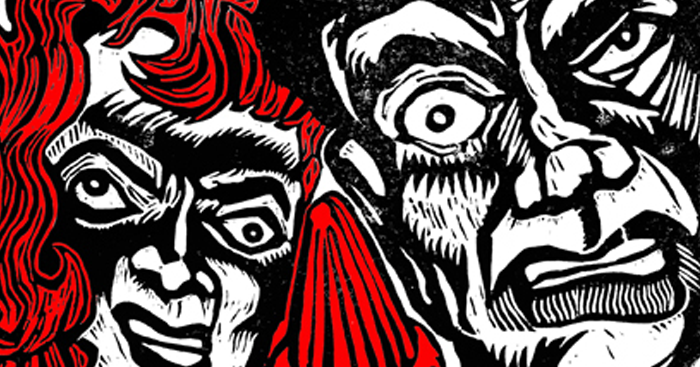 This Saturday, Grumpy’s Downtown is hosting Bash 15, an annual, all-day musical extravaganza devoted to local label Amphetamine Reptile.  This year marks the 30th anniversary of the record company, which was started humbly enough by musician, artist, and Grumpy’s co-owner Tom Hazelmyer during his four-year stint in the Marines.  Stationed north of Seattle, Hazelmyer ran the label out of a hand grenade crate he kept under his bunk, putting out small run 45s featuring Mudhoney, the U-Men, and his own band Halo of Flies.  Eventually AmRep moved back to Minneapolis, where it has churned out vinyl-junkie gems from the likes of Helmet, the Melvins, Billy Childish, and Minneapolis punks the Cows, who are reuniting for one night only to headline the show.

The night before, Grumpy’s will be screening The Color of Noise, a 2014 documentary about AmRep’s history and impact on the indie scene, both in terms of music and art.  Expect interviews with heavy-hitters such as Jello Biafra, Shepard Fairey, and Frank Kozik all singing the praises of (and most likely telling fucked up stories about) the man behind the label. 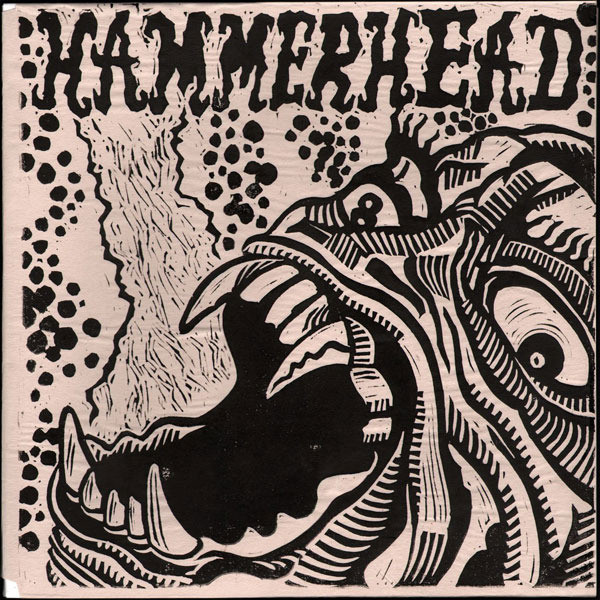 Hazelmyer likes to stay busy: over the years he’s been involved in producing Zippo lighters and collectible toys, running Ox-Op Gallery here in town, and participating in art exhibits all over.  This year’s Bash will also feature a show of linocut prints by HAZE XXL, Hazelmyer’s nom de guerre.  His album covers and concert posters are intense, dramatic, and hilariously weird, like single frames from an old ‘60s horror comic taken utterly out of context.   Guest writer Russ White spoke with Hazelmyer over email about his artwork, his influences, and his take on what makes Minneapolis so galldarn special.

(Russ White): In one segment from The Color of Noise, artists Coop and Derek Hess talk about the resurgence of concert posters in the ‘80s.  I've seen a lot of the old posters that Winston Smith and Raymond Pettibon used to xerox and slap up for punk shows, and I'm wondering what inspired you to move from cheap photocopies to actual printmaking?

(Tom Hazelmyer): We started doing silk-screened posters through our t-shirt guy at the time, but those were for LP promotions.  Frank Kozik once told me he saw those posters and a lightbulb went off that he should move in that direction from xeroxing and offset printing.  Shortly after, I was brought a Kozik poster by one of the Cows home from tour and went nuts for it and hit him up and started lining up shows for him to do posters for.  We would then ship his posters out countrywide giving him a further reach than Austin TX where he was based out of at the time.  Others like Coop (who were fans of AmRep & Kozik) then started approaching us to do the same.  Being of as incredible a caliber as Kozik and having enough big shows and tours happening, we tapped a bunch of artists like that, including a young Shepard Fairey.  Soon enough other labels caught onto our schtick and it became a phenom. 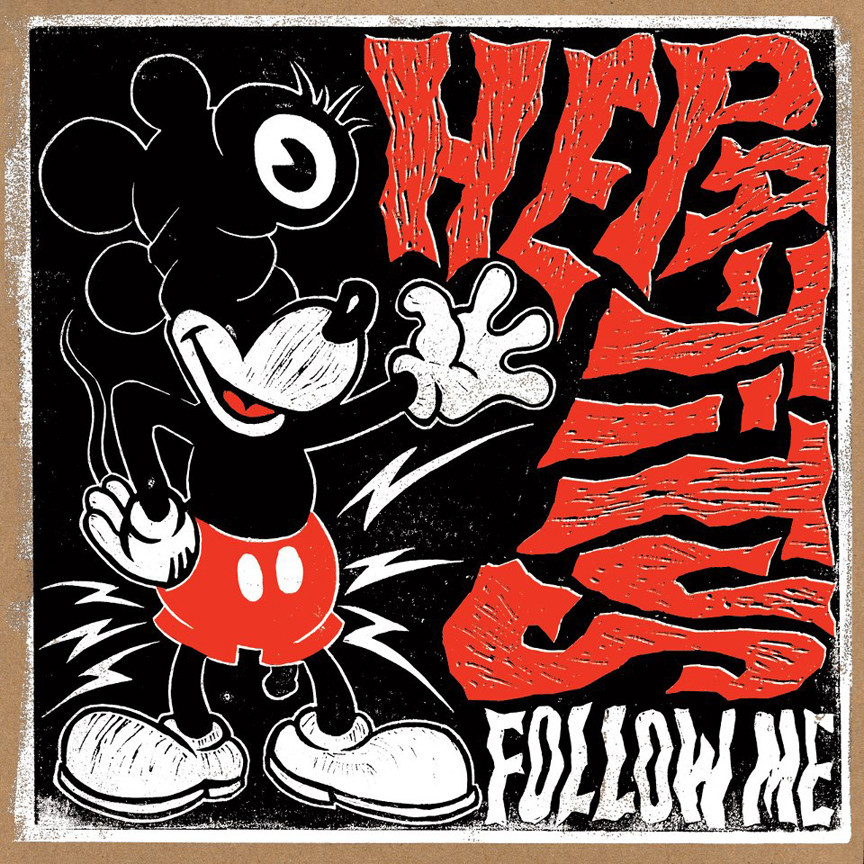 (RW): Who or what would you cite as influences on your visual style?  I see a little bit of Jack Kirby in some of your work.  Is that way off, or did you grow up on comic books?

(TH): Jack Kirby was leaned on heavily when I started out doing linocuts.  I hated his style as a ravenous comic consuming kid.  Too arty (haha).  But I was completely obsessed with his art at the same time I took blades to linoleum.  I’ve been influenced by a mountain of stuff throughout my life, and sometimes won’t even remember where and what it is getting regurgitated through my blender until after the fact.  Kirby, though, was right up and out there.  It hugely informed me in terms of structure.  I’ve moved past it the past couple of years.  Certainly Pettibon, Panter, Williams, Coop, Kozik and a mountain of others in art and design.

(RW): Are there any of the old masters that really blow you away, specifically old woodblock printers?  Who are some of your favorite contemporary artists?

(TH): Otto Dix I discovered at the same time I started carving.  People brought up German expressionism a bunch in regards to the carves so I checked it out and was blown away.  Just happened to be in NYC the same time a large exhibit of these artists was at MoMA and was floored by them.  Other than that my knowledge of block cutting is next to nada, and I have been going at it blind.  Contemporary, the list is too long.  Trying to keep up on it certainly has reduced my ability in digging into the past as much as I’d like to.

(RW): When did you start linocutting?

(TH): 2009.  I was recovering from a month long coma brought on by meningitis.  They were stressing I needed to do fucking Sudoku puzzles as brain damage therapy.  Instead I was doing some assembly line hand made LP jackets that were stencil and collage, and I wanted a piece of art I had generated entirely myself.  My daughter had brought home some linoleum from school, and the timing was perfect as it was the right thing to include on these 50 jackets I was doing for an installation at SooVAC.  My second carve ever was a hand grenade with the words ”pull the pin pussy” - ha.  I was really enamored with the process.  Also the brain damage had my mind pretty pliable so thinking negative space and in reverse was quite easy as I had to relearn how to get it to function anyhow. 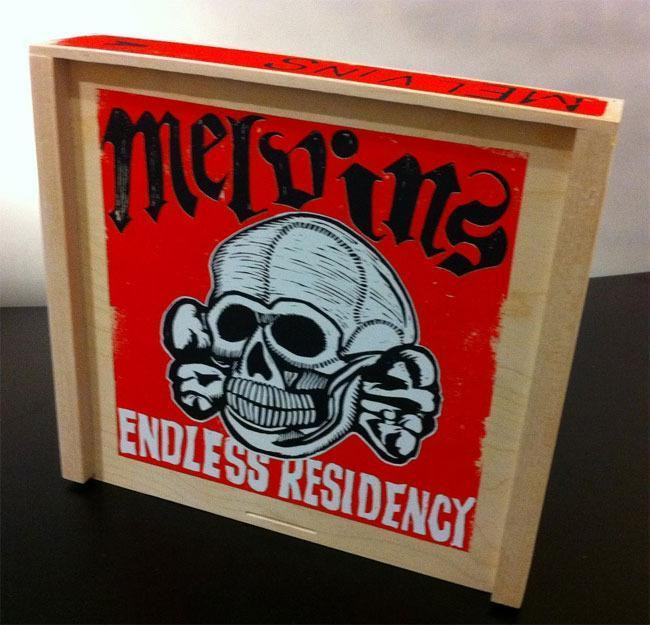 (RW): One of AmRep’s claims to fame is your impeccable sense of packaging design, putting out colored vinyl and picture discs and limited edition, hand-pulled album sleeves.  Like you said, you’ve even exhibited AmRep albums in art galleries.  Were there records you had as a kid that changed the way you thought about music packaging?

(TH): The first massive influence was a lot of the graphics utilized in the first wave of UK punk and post punk.  Jamie Reid (Sex Pistols graphix), Malcolm Garrett (Buzzcocks), and many unnamed others.  It was like nothing else at the time and pretty broad in scope.  I cut my teeth doing Hardcore fliers and sleeves, the “Xerox School” which is minimal and base to the extreme, but a pretty great place to start when you’ve had no schooling.  As I wanted to expand past that, I had to learn as I went in what was possible and more importantly, what was affordable.  Learned quickly that if you knew how to get the production done yourself, you could do things that otherwise would be cost prohibitive to any label (not just a fledgling indie).

(RW): Most of your work that I've seen is album covers or show flyers.  Do you make much stand-alone visual art, or is it always in service of the music?

(TH): After 35 years of LP/poster design I’m extremely comfortable working under that banner and tailoring fine art urges to bend to a functionality. It’s too easy just doing whatever you want (haha) and it’s seemingly beneficial to my personality to need restrictions to combat. 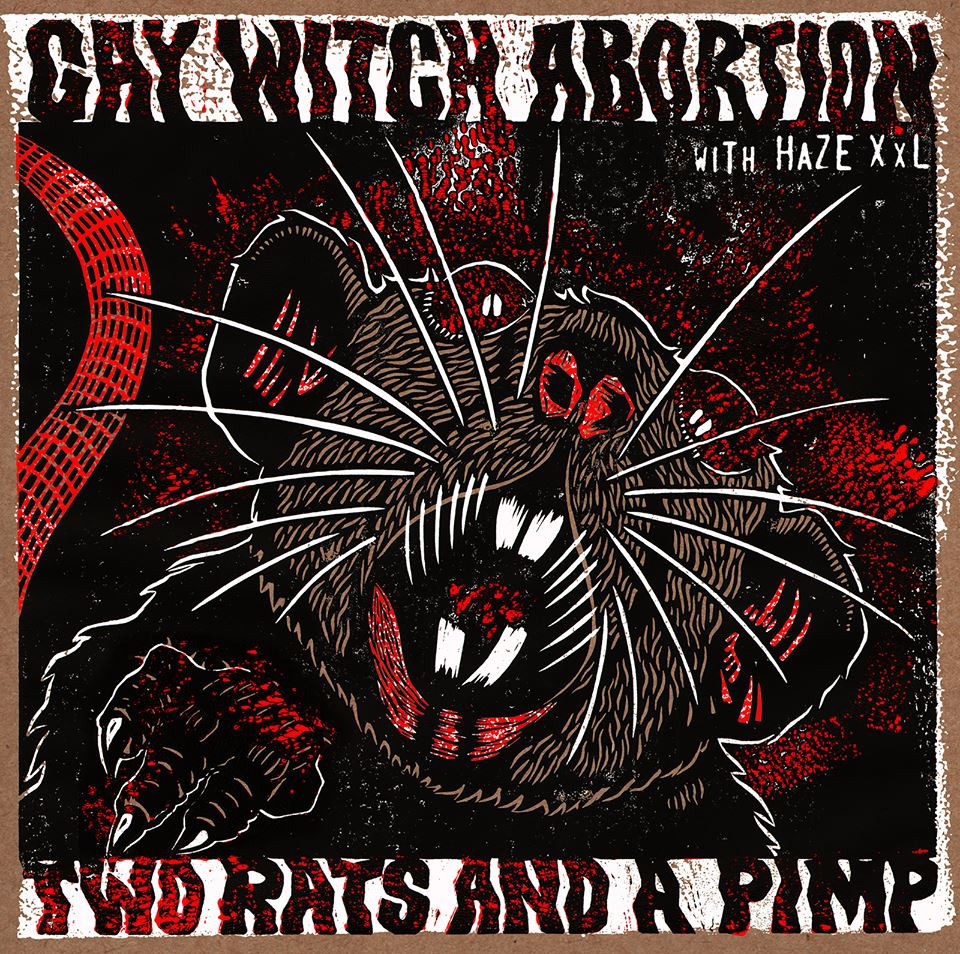 (RW): How long was the Ox-Op Gallery active?

(TH): The gallery period was 2003 - 2006.  Exactly 3 full years and 36 shows.  There was a large project that culminated in a book, soundtrack, and animations with artist Dalek that happened under the Ox-Op banner and toured the country as well as Paris. (A Purge Of Dissidents)

(RW): What did you learn about the art world from running Ox-Op?  I see from the gallery website that you showed the work of a lot of illustrators and street artists; did you feel much pushback from the established art community for going too "lowbrow" back then?

(TH): The pushback from the mainstream or establishment is the arena I’ve spent my entire creative life in.  Sometimes I think I wouldn’t know how to handle acceptance if it were to occur.  Ox-Op broadened my scope outside of merely making art.  Learning the ropes on the other side of the fence for a while and learning how to support artists I’m a huge fan of, aside from being a treat, taught me a lot.  There was plenty of snobbery in the occasional “fine art” type who would show up at Ox-Op and proclaim “this isn’t art.”  They usually wound up getting a lowbrow railroading.  I spent my art school years as a Marine.  It served as a better education in knowing how to combat that kind of situation.

(RW): More generally, what do you think of the art scene in Minneapolis?  Do you go to many openings or exhibits around town?

(TH): I’ve remained intentionally detached locally.  It’s a habit from my music career days in that bypassing the local politics/scene seems more productive.  I love it here, but folks tend to get caught up in small pond politics and lose sight of a bigger world out there.  I’ve had far more shows out of town than in as a result.  Keeps it interesting.

(TH): I’m not one that’s big on mulling over the past, so having a perspective on influence/impact felt is half-assed.  The music scene seems to keep on chugging and being vital which a lot of, if not most, other cities have a hard time matching.  Something in the water?  AmRep might have shown the way in that you can stay here and get shit done, and accomplish something without the obligatory move to a coast.  As for local support for AmRep, it’s a mixed bag.  At times we’ve gotten a healthy nod, but there’s others where things we were doing were far better received in NYC or LA.  I rather like the anonymity that affords.

(RW): Is it something in the water?  Any thoughts on what it is about Minneapolis that makes it so damn culturally vibrant?

(TH): Unlike other towns that may have one explosive scene that fades away and the town returns to normal, this place never really let off the throttle since getting on the map the first time.  So many factors you could do a thesis on it.  A few that come to mind is, aside from a healthy stock of homegrown talent, it draws an above-average amount of creative types from the region despite it’s smaller size (say compared to NYC/LA/Chicago) that places like Milwaukee or an Indianapolis don’t seem to, as they get passed over for the bigger city.  The geographic isolation helped as well in that folks gave locals more credence/attention than other cities the same size with the complex that it has to be from the outside cultural centers to be valid.  I think the same isolation combined with a larger sense of community that’s less competitive than the coasts has been a big contributor.  You can roll up your sleeves and participate a lot easier when starting a zine, label, gallery, band, etc.  It used to be far more affordable, but that’s been quickly changing and I suspect will take a bite out of what was.

(RW): Finally, what's next for Amphetamine Reptile and HAZE XXL?  Any big releases or art shows you have up your sleeve?

(TH): This event has kept me occupied for months. Aside from an art show in Winnipeg the following weekend no big shakes are being planned. Buzz from the Melvins and me usually have something cooking, and right now we’re talking about Australia so that might be interesting, but too early to chat about publicly (lol).