Turning the Inside Out at Hennes Art 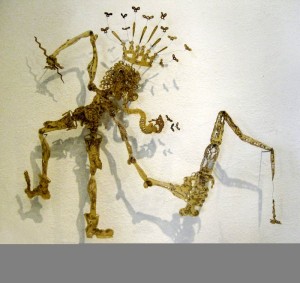 The Lament of the Flaccid Sword. Michael Sommers

Inside Out: The Self Portrait Show is currently on exhibit at Hennes Art in Downtown Minneapolis. This show features a single self portrait from each of its 26 participating artists. These artists include local favorites who seem to crop up everywhere in this city (like Jennifer Davis, Sean Smuda), to underrated artists (such as Joe Ashebrock), to local art heavy-weights who you wouldn't usually think of as showing in galleries (like the acclaimed performer, writer and puppeteer Michael Sommers).

With most of the work here brand new and specifically made for this show, it's easy to think of this project as an assignment from curator John Schuerman to the artists, many of which don't “do” self portraits when left to their own devices, (or in some cases portraits at all). If you are an art geek like me, this is an exciting chance to see these creatives stretch out of their usual habits.

A few stand out pieces from this enormous show: 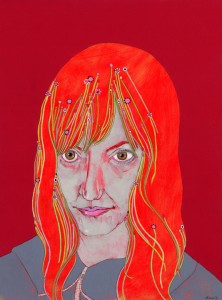 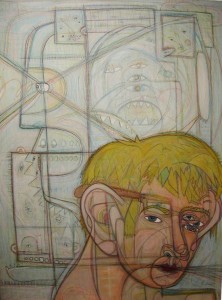 Jennifer Davis' dream-like self image is a small but powerful painting. It simultaneously conveys playfulness along with sticky sweet sadness. The piece is bold and confident, with strong use of line and the nearly nauseating, psychologically damaging colors. But the artist's representation of herself appears to be much less confident. The Jennifer Davis in the painting has bad posture and is looking off in the distance, avoiding direct eye contact. At the same time, her head appears to be sprouting something new and beautiful, suggesting a whole other world is buried under her hair.


David Aschenbrener uses cast bronze to create a simplified version of himself as the mythological Icarus whose wax and feather wings melted from carelessly flying to close to the sun. Here, Aschenbrener places himself in this cautionary tale of becoming overly confident and arrogant. In this context, Icarus' wings can also refer to the lost wax model that must be destroyed to create the bronze end product. This process itself conveys a sense of death and renewal.


The figure here is minimal, graceful and spontaneous. It looks as if it were formed organically. The wigs are delicate, but the head has a heavy, dramatic and monstrous quality.

Perhaps my favorite piece in this show is Joe Ashebrock's Good Eye which refers to a visual problem that Ashebock says limits his vision in one eye, effecting depth perception. (Which might explain the flattened perspectives in his work). Ashebrock's self portrait is emotionally expressive and psychologically jarring. The many layers of line he lays down tell and retell a story. The smallness in which he presents his own image as opposed to the large is telling of the importance Ashebrock puts on the physical as opposed to the what going on in his head. Behind Ashebrock's figure is a world of strange robot-like monsters. But this piece does not come off as dark or bleak but rather is strangely light and "matter of fact" and seems to have a sense of humor. Ashebrock's use of line is confident and his distortion of proportions is purposeful, adding to the content.

This is just a glimpse at some stand out pieces in Inside Out. There are 23 other paintings, sculptures, and a video piece that I don't mention here. Some are a less literal take on the self portrait, some more. Go see the show. With this much work, you are bound to connect with something.

Gallery Hours: Monday - Saturday 10am-5pm
This article has been archived from the original MPLSART.COM site. It may contain dead links, broken images, and formatting issues. We are working to fix these as much as possible. Thank you for your patience.