Jennifer Davis doesn't like to talk about her work. 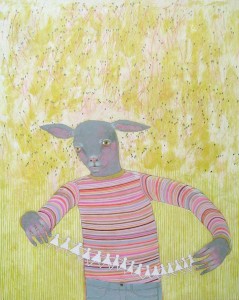 Jennifer Davis does not like to talk about her art... and I don't blame her. Her work is not meant to incite cerebral acrobatics that make some literal point and give us an ”a-ha moment”.  It also is not just design fluff that exists only to make our eyes happy. Instead, Jennifer Davis' work is a very real expression of an artist's exploration of her materials and herself. (But the fact that it makes our eyes happy is a plus).

Davis' work is charming and funny and suggestive of Fairy Tales that never were told. Her surfaces are occupied by animal/human hybrids playing in sparse but heavily textured landscapes. These figures walk a strange line between cute and worrisome. While at first sight Davis' scenes may seem airy and fun, (and maybe kind of silly), at a closer look it is hard not find a sense of sadness and longing. The feelings of something lost or not quite obtained is always lurking in her character's eyes and in the openness of the landscapes they inhabit.

I recently had a telephone chat with Jennifer Davis to discuss her work in the group show Flourish currently on exhibit at the Minneapolis Institute of Art.

While very pleasant, Jennifer Davis made it very clear that talking about her art was not her favorite thing to do. “I'm really terrible at this”, is how she started our conversation. Davis is very quiet and careful to put words to her work. However, once we got the conversation going, she was well spoken in describing her process. (Then she would apologize about how badly the interview was going).

All of Davis' pieces in Flourish are a uniform 24”x30” in size, and painted on panel. The surfaces are heavily worked with layers of paint which are then partially subtracted and repainted. These works were conceived in the hand and in the gut. Davis doesn't plan anything before starting. 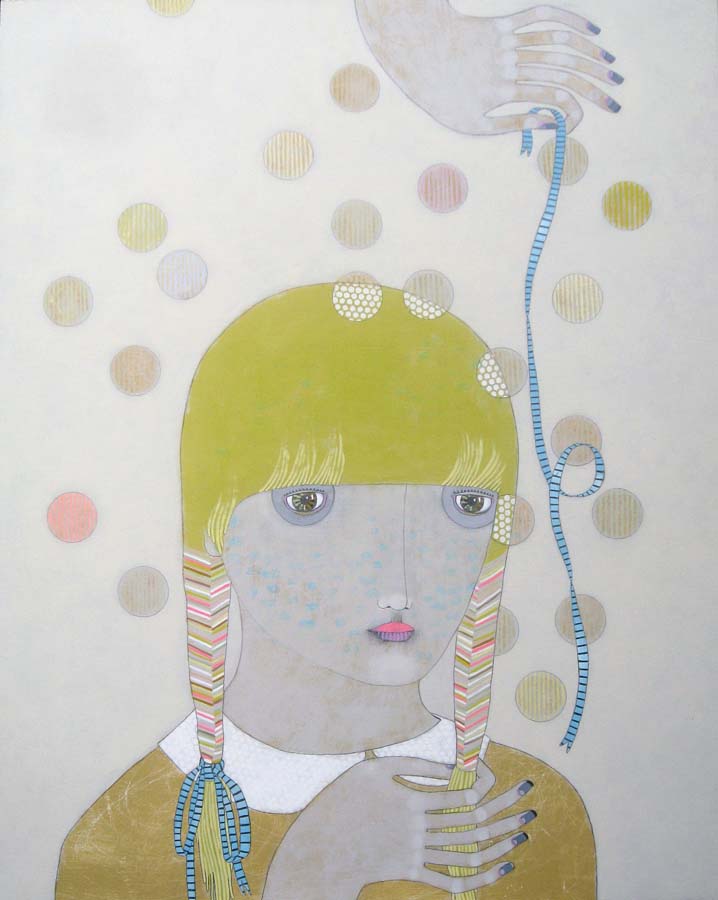 “I would just put down several layers of color and do sanding and scraping” Davis told me.  “... this sounds really weird, but I would start seeing faces in there. I look for the eyes, I always start with the eyes. Then I would just build the face”. “I'm making up a story as I go along, without intending to make any certain type of narrative. It's free-association, I have to just figure it out as I go along”.

When asked, Davis agrees that the characters in her work do seem melancholy, lonesome or, at times, anxious. She adds, “I don't feel sad or lonely, but I like that play against the cutesy, and pastel and the childish fantasy-land stuff with the undercurrent of the more adult feelings”. She went on, “I was holed up in my studio by myself doing this, I spent tons of time alone. I see these all as being self portraits. But I never feel lonely. I'm a real loner, I like being alone”.

At times, the work in this show has a spiritual quality. The piece called “Reverence” is an obvious example. A dog/woman creature stands alone in a barren landscape in front of a distant house. The dog/woman holds a golden leafy sprig in front of her forehead that rises up. A pinkish circle floats in the center of it while lines from the figures back rise up blossoming yellow and red sprouts. Does this sense of rising and gold emerging from the head suggest a soul?

“You got it”, Davis told me. “She's the artist and she's protecting her artist spirit”. Then Davis quickly followed with, “It sounds so cheesy, I hate talking like that.”

Davis is right. Words can't fully express visual art, or even come close. They always fall flat. That's why visual art exists as visual instead of as written word. Words can't stick to the subtleties painting can afford.

Jennifer Davis' work in Flourish is a journey. It is an exploration into the subconscious and the crazy characters that cause mischief there. These pieces are a series of narratives that are cute and sad. Child-like and complex. Each is separate but each dwelling in the same unlikely universe.

Go see the work...  and I'll stop chasing these images, trying to trap them in text.