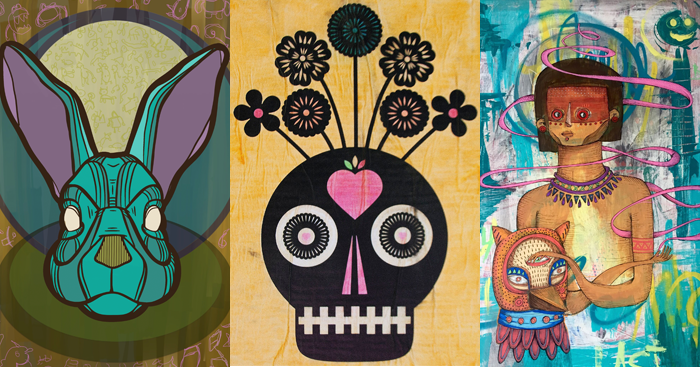 Folklore, by its nature, is very old but very much alive. All cultures have their own mythologies and tall tales, their creation myths and ghost stories, their fairy tales and hometown heroes. Whether it’s Paul Bunyon or the chupacabra, the Maco Light or the Day of the Dead, each generation hears, learns, and retells their stories in their own way, passing on a mutable truth through oral tradition like a centuries-long game of Telephone.

In this upcoming exhibition, Rodrigo Oñate, Luis Fitch, & Repo do not simply retell the stories of their childhood; they remix them. They have retrofitted their Mexican, Central American, and Minnesotan mythologies with a crisp, vibrant street art sensibility. Like old school vinyl on a DJ’s turntable, each artist’s cultural background is spun, scratched, and remade into works of art that are altogether fresh and new.

Luis Fitch’s Día de los Muertos-inspired wheatpaste prints can be seen gracing lightpoles and alleyways around Minneapolis and in cities across the continent. A native of Tijuana, Fitch went to school in San Diego and eventually landed in Minnesota in the late ‘90s. The dichotomy of life within these two worlds, the ‘South’ (Mexico) and the ‘North’ (The United States) was an important influencing artistic factor. He quickly learned to adapt, developing his own individual artistic and cultural identity. His work is immediately recognizable in its graphic simplicity: a bright, playful, vectorized update to traditional Mexican iconography that speaks to the problems of modern-day Mexico such as government corruption and drug war violence. Combining contemporary digital technology with “Papel Picado,” the Mexican technique of colorful hand cut paper dating back to the 18th century, Fitch’s work moves us seamlessly across cultures and through time. http://luisfitch.com/art/

Another native of Mexico now living in Minneapolis, Rodrigo (Roco) Oñate, shares Fitch’s talent for vivid and evocative imagery. Roco’s paintings and drawings burst with color and pattern, each picture plane filled to capacity with bizarre woodland creatures and fairy tale characters methodically covered in stripes, dots, feathers, and symbols, like a Mexico City-based Where The Wild Things Are. Each piece has the energy of a wild parade, with birds, fish, rabbits, children, and beasts leering with piercing, cartoonish eyes. The narratives here are harder to pinpoint, but they carry the weight of an ancient, shamanistic tradition, like age-old murals restored to their original, eye-popping luster. A fitting analogy, actually, for someone that got his start as a street artist. http://www.rawartists.org/roco86

Repo, a native Minnesotan and veteran of local street art, has a markedly different cultural heritage, at least in terms of recent history. Never identifying with the “hockey and homophobia” mind-set of the suburbs, where he grew up and purposefully pasteurized, conformity seemed the norm, Repo instead found solace in philosophy, science, and countercultures. He developed his own wheatpaste poster style centered around a single cartoon character whose arms and legs wrap around itself like a slightly indignant floating Buddha. The artist reworks the character every time, sometimes as a fat cat, other times an Easter bunny or a buck-toothed boy. Putting work in the street, especially reworking of the same image, has been a way to assert himself in a world where commercial bombardment defines our environment. The character has now become part of the artist’s own personal mythology as well, enjoyed and redrawn by his younger niece and nephew. In this way, his artwork carries a totemic quality and creates a unique, personally-based family folklore of its own.  https://www.instagram.com/repomn/

Find out what's up every week.