"Skew Lines" comes to a close this week, showing the product of a monthlong collaboration between two artists working in text, film, and installation.

For the final iteration of its Collab residency program, Soo Visual Arts Center hosts Rosy Simas and Heid Erdrich. During the entire month of May, the two have worked in the gallery side by side, advising each other and mapping out a unique space as they install their own multimedia works, which ultimately flow into and dialogue with each other.

“Collaboratively, we’ve decided how to use the space, how to use the time,” says Erdrich, noting that collaboration hasn’t necessarily meant physically creating pieces together. “We work beside each other and talk and have similar obsessions, and they give me ideas.”

“In one way or another we work together all the time,” adds Simas.

The two have made work simultaneously in the same community for years, as Native women artists in the Twin Cities. Erdrich is Ojibwe, enrolled at Turtle Mountain, and Simas is Haudenosaunee. Both are based in Minneapolis. Since 2013, they’ve actively attended each other’s rehearsals, gallery openings, and performances, providing feedback and conversation on various projects. When Erdrich was the gallery director at All My Relations, Simas, who works primarily in performance and film, shared thoughts on how to install works intentionally, in a way that animated the entire space. When Simas was in rehearsal for her piece “We Wait in the Darkness,” Erdrich attended and shared her thoughts. Working in a variety of media has blurred the lines between different studio practices, allowing the two to develop a more holistic approach to art.

“Half of it, for me, working in other disciplines came out of necessity. Making costumes and making set pieces,” says Simas. “A lot of people who work in the field of dance do a lot of their own things.”

She also sees dance as a visual art, especially in the staging and presentation. Similarly, Erdrich, who comes from a literary and text art background, sees poetry as a performance. “It’s a presentation,” she says. “And it has visual aspects to it on the page, as well. Those are the two things that really interest me, and that’s why I started making visual work with poetry.”

Now, Erdrich has moved further into installation to give people a glimpse of her process; both Simas and Erdrich agree that viewers often want to know the context of their work.

“I feel like giving audiences different ways to enter one’s work and what one’s trying to get at actually builds better relationships with the audience,” says Simas. “Richer or deeper or more understanding [relationships].” 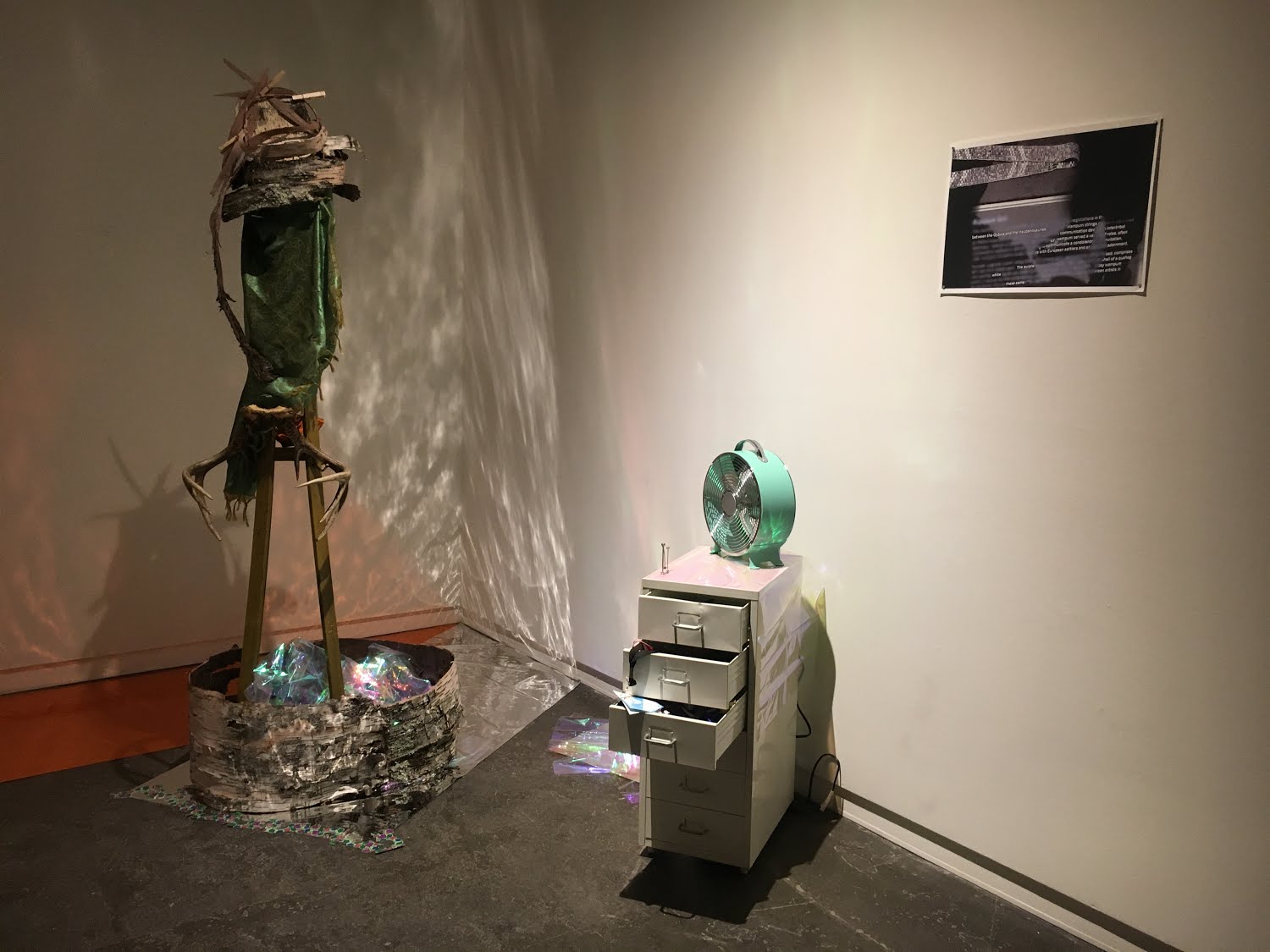 A detail of The Process Office, presenting a glimpse into Heid Erdrich's workspace.

To this effect, both artists have attempted to install in a way that invites the viewer to look at their work from multiple angles. In one enclave of the gallery, visitors will be able to step into Erdrich’s “office,” complete with furniture and objects from her workspace and poems hung on the wall.

“This is supposed to look like my brain and my business when I’m working,” she explains. “These are things I keep around me to work. And then there’s text everywhere.”

Some of the texts displayed are erasures, where she has taken a page of text and blurred out all of the words except for a chosen few in a very visual process, creating a new literary work of her own. 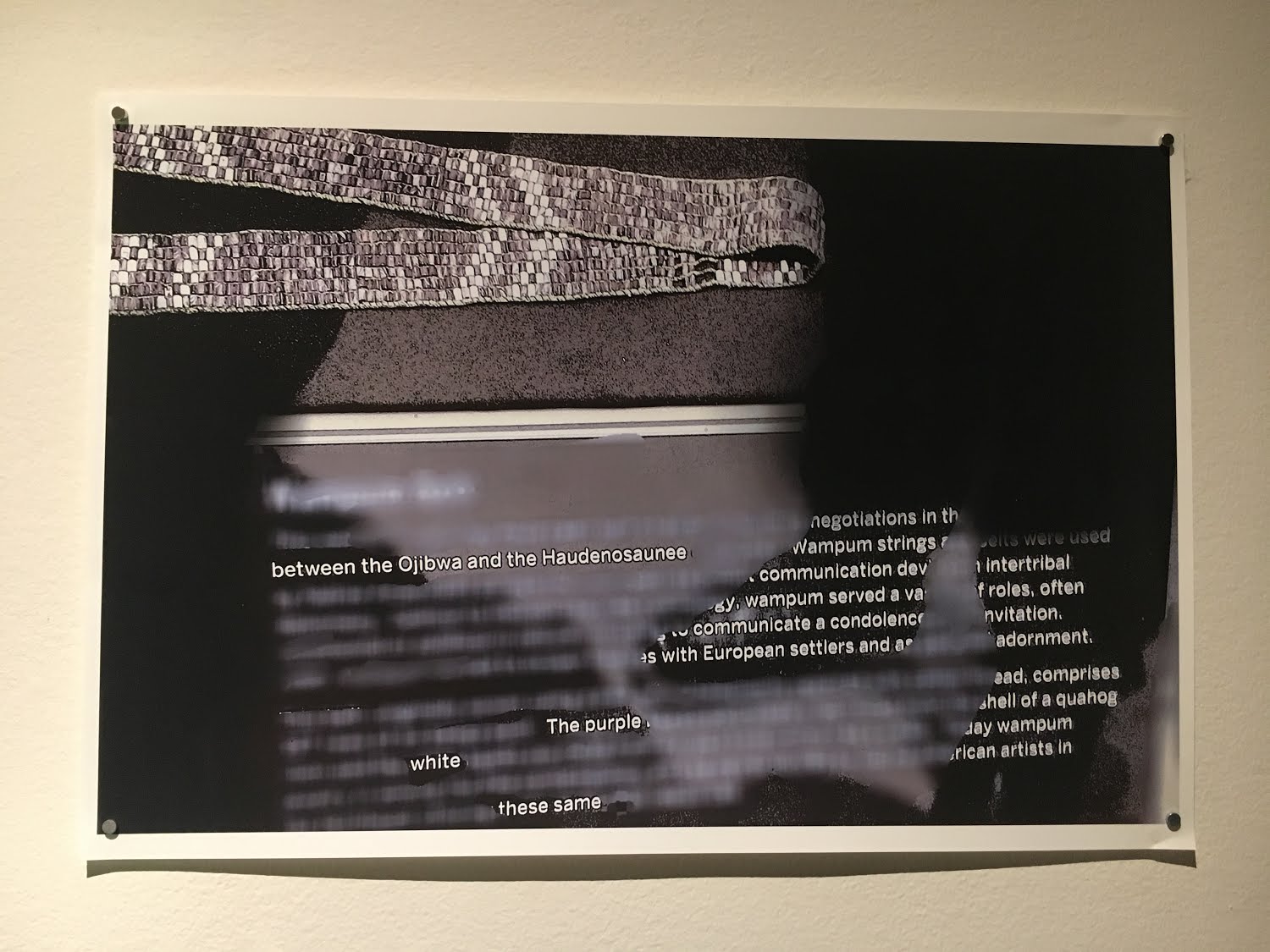 Text art by Heid Erdrich, displayed as part of her office installation.

Next to Erdrich’s office is a video installation by Simas, showing excerpts from different films she has made.

“All of the films are mapped for this space in particular,” says Simas. “They’re projected through bent masks, a mask being like a shape.”

The footage is shown in a traditional rectangular shape, as well as a series of more non-traditional flat and curved shapes. Sometimes it wraps around itself to form a figure that almost feels three dimensional, even while laying flat on the screen.

In Oka-lusa, meaning “black water,” barely moving images of tall grass and shallow water cast repetitive, soothing sounds into the gallery, into Erdrich’s office and across the rest of the show.

As Simas plays around with the projection, Erdrich flips through encyclopedias and arranges another piece in a different part of the gallery. Often, they’ll offer suggestions to each other as they move around.

“It would be nice if you had more of a shadow,” Simas says, gesturing to the wall at the back of Erdrich’s office.

“No, I like that shadow a lot,” Erdrich replies, reexamining the wall.

“I should put the Skins film in the films,” Simas muses.

“Maybe we could put it out here?” asks Erdrich, gesturing to the gallery’s entryway.

In discussing the idea of collaboration, Erdrich recalls photos she’s found of her mother’s side of the family: a group of women standing side by side, clearly having just done something together.

“I think, maybe, collaboration for Native women is not always, ‘Oh, we built this thing together,’” Erdrich says. “I think it’s often, ‘We supported each other; we were alongside each other.’

“That’s why I liked the idea of skew lines for the title,” she adds. “They’re lines that appear to meet but don’t.”

Throughout the month of May, ending in a reception on May 25, visitors to the gallery will get to see this work taking place, as the artists dialogue with one another and exemplify a more inclusive definition of collaboration, cognizant of the ways in which artists collaborate with each other on a daily basis through viewing and discussing work and ideas. 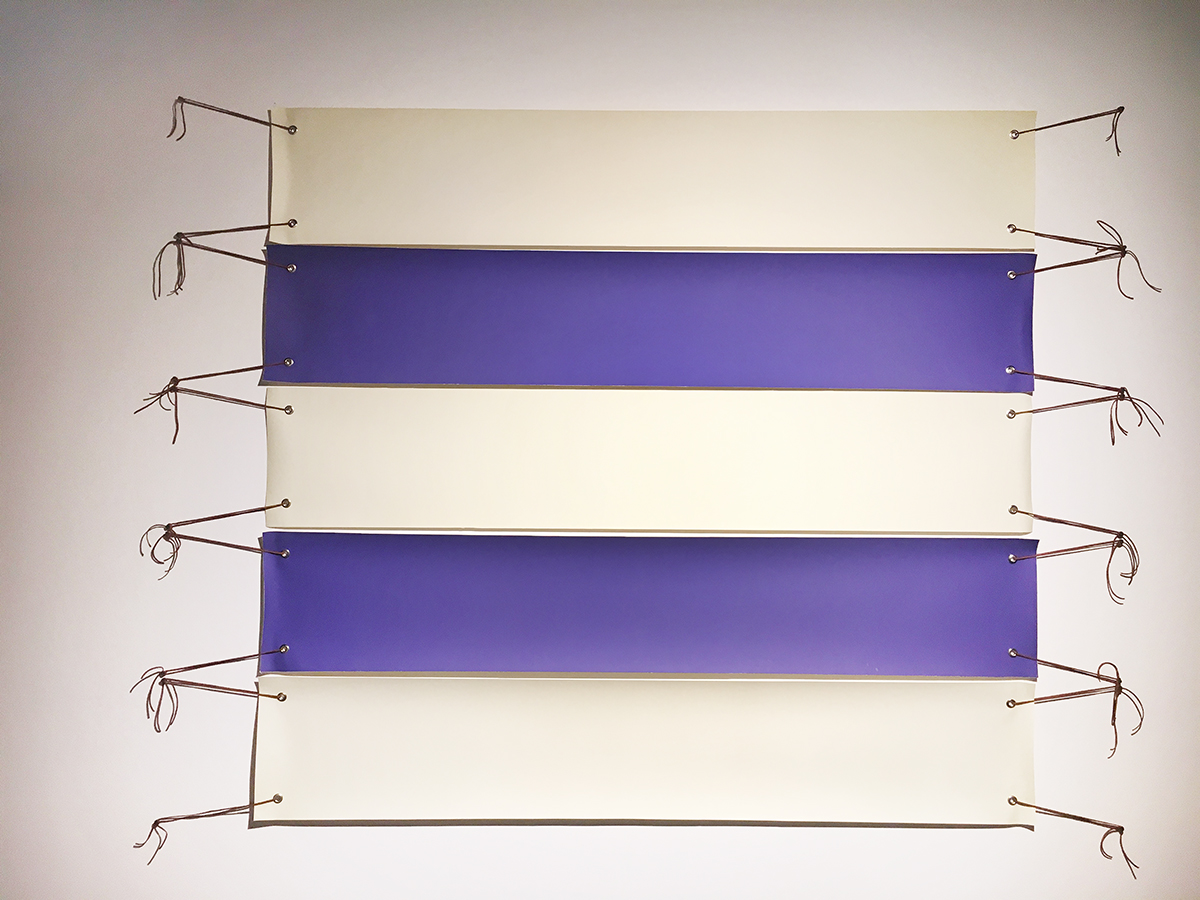 Two Row by Rosy Simas, takes its name from the Two Row Treaty between the Haudenosaunee and Dutch governments; the piece takes its purple and white rows from the wampum belt that was made to represent the agreement.

Banner image: Video installation by Rosy Simas, which loops over 100 minutes of footage; Simas encourages viewers to come and sit with it on a less crowded day in the gallery. All photos by the author.